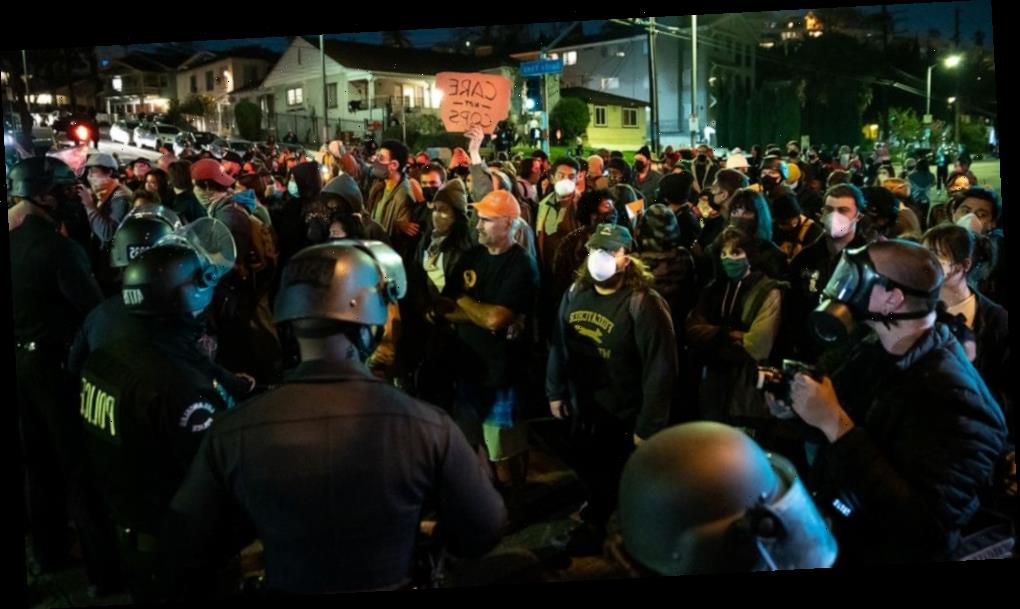 A clearing of a homeless encampment in Los Angeles’ Echo Park Lake led to violent clashes between police and protesters Thursday night.

The sweep of the encampment, where about 200 people live, is a part of a monthslong planned $500,000 rehabilitation effort after tents proliferated at the park during the pandemic and sparked concerns over trash and safety.

The Los Angeles Police Department declared an unlawful assembly around 8 p.m. local time after hundreds of protesters faced off with officers. In total, 182 people were arrested for failure to disperse, police said.

Police stated Thursday that people in the crowd flashed high-intensity lights “in an attempt to blind officers and prevent them from performing their duties.” Officers in tactical gear fired nonlethal and bean bag rounds into the crowd in response to projectiles thrown at officers, police said.

Three people arrested were members of the press who were later released at the scene, police said in a Friday statement. Two officers sustained minor injuries and received medical treatment and were released.

The last two individuals remaining inside the park who declined offers for housing were arrested and removed this morning, police said.

Signs were posted at the park Wednesday giving the people who lived there 24 hours to clear out and fencing was put up around the area.

The homeless population was offered transitional housing and shelter, as well as COVID-19 vaccines, Councilman Mitch O’Farrell, whose district includes the park, said.

At least 166 people were offered temporary housing as of Thursday evening, he said.

“We made significant progress today toward our goal of housing everyone (who was) at the park and moved an additional 32 unhoused individuals into transitional housing,” O’Farrell tweeted Thursday. By evening he urged for “calm and cooperation” following news of the clashes.

The encampment has been the site of drug overdoses, assaults and shootings, with four deaths in the park over the past year and the site requires lighting, plumbing and public safety repairs, O’Farrell’s office said.

Councilman Mike Bonin slammed the unrest as “shameful” for the city.

“A neighborhood in lockdown. Hundreds of cops in riot gear. Reporters being zip-tied and detained. Protesters being kettled and arrested. This is a disgrace and it did not have to happen. It’s a shameful day for Los Angeles,” he tweeted Thursday night.

David Tyler, who has lived in the park since 2019, said the clearing of the area left him “terrified”.

“They came in and swooped in in the middle of the night in riot gear, put this fence up, built it,” Tyler said to local Los Angeles station KABC. “It was all insanely planned, and I’m terrified right now is all I can tell you.”

The sweeping has sparked fierce debate over the treatment of people without housing, especially amid the COVID-19 pandemic.

“The reality is folks were offered interim shelter with no path to permanence,” Myers told ABC News. “There’s no long-term strategy to address the affordable housing crisis in this city. A room today means nothing in terms of solving the housing crisis tomorrow. When these interim shelter beds run out, there is nothing to say that people won’t return back to the streets.”

Homelessness in Los Angeles has only soared in the pandemic.

A total of 66,436 people live in the streets, shelters and in vehicles in Los Angeles county — up 12.7% from 2019, according to the Los Angeles Homeless Services Authority report released in June.

Scarlett Johansson Jokes She Has 'Made a Career Out of' Past Controversies: I Was 'Off Mark'