A young woman is feared to have suffered a sexual assault in a field at the Appleby Horse Fair in Cumbria.

Police have launched an investigation after the victim, in her 20s, was found in a ‘distressed state’ near St Lawrence’s Church on Sunday morning.

The suspected sex attack came after at least seven arrests were made after brawls broke out between feuding families on Friday and Saturday, while the streets were left covered in horse manure and rubbish, and one caravan was left completely torched.

The woman, believed to be from the traveller community, was taken away by ambulance while officers cordoned off the area where she was found.

Around 10,000 people from the Gypsy, Roma and Traveller (GRT) community descended on the small town of Appleby for the annual four-day cultural event over the weekend – which was marred by violent outbursts.

A makeshift toilet with soiled clothes and tissues was also discovered by locals, many of whom now want the event cancelled for good, with one branding some of the behaviour ‘appalling’. 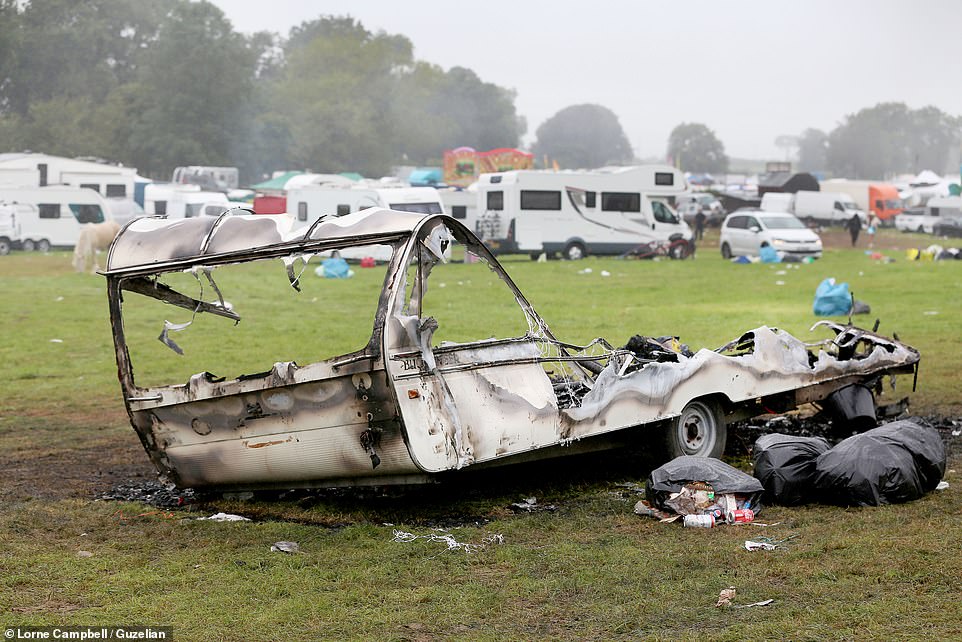 A burnt out caravan is left on a field in Appleby, Cumbria, following the four-day Appleby horse Fair 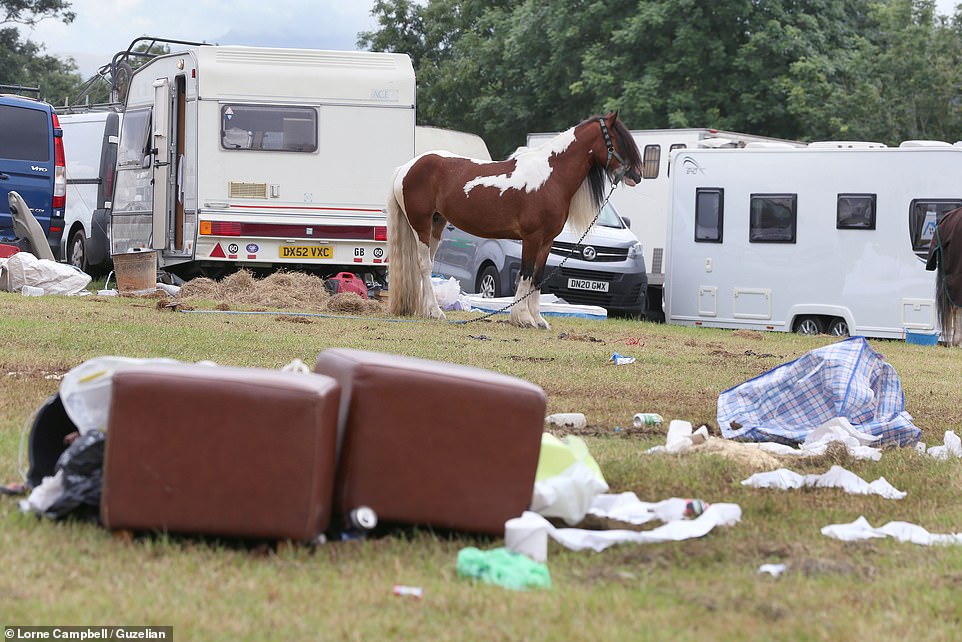 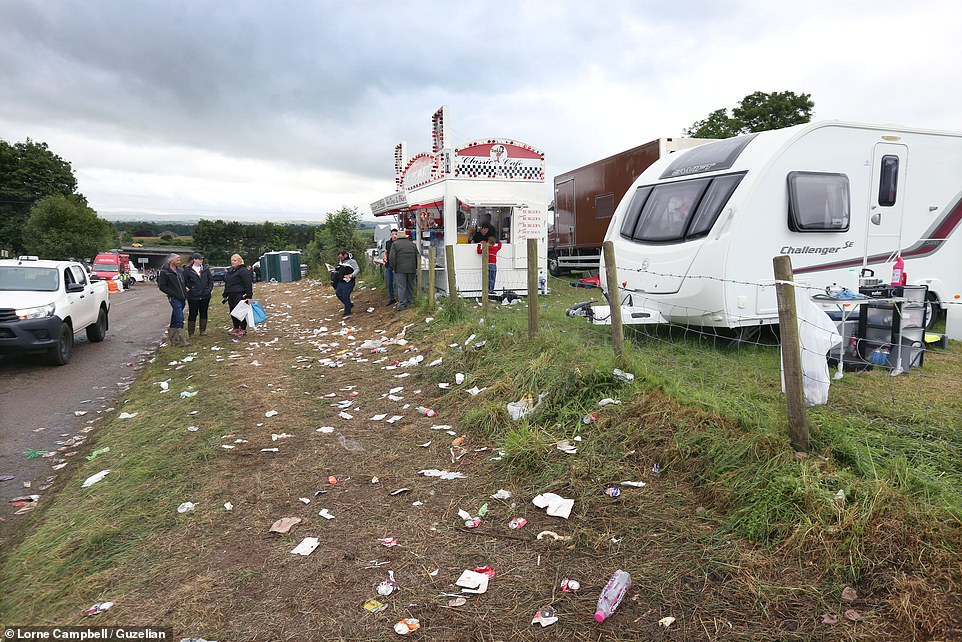 The return of the horse fair was marred by violence and a suspected sexual assault, while severe littering (pictured) polluted the landscape 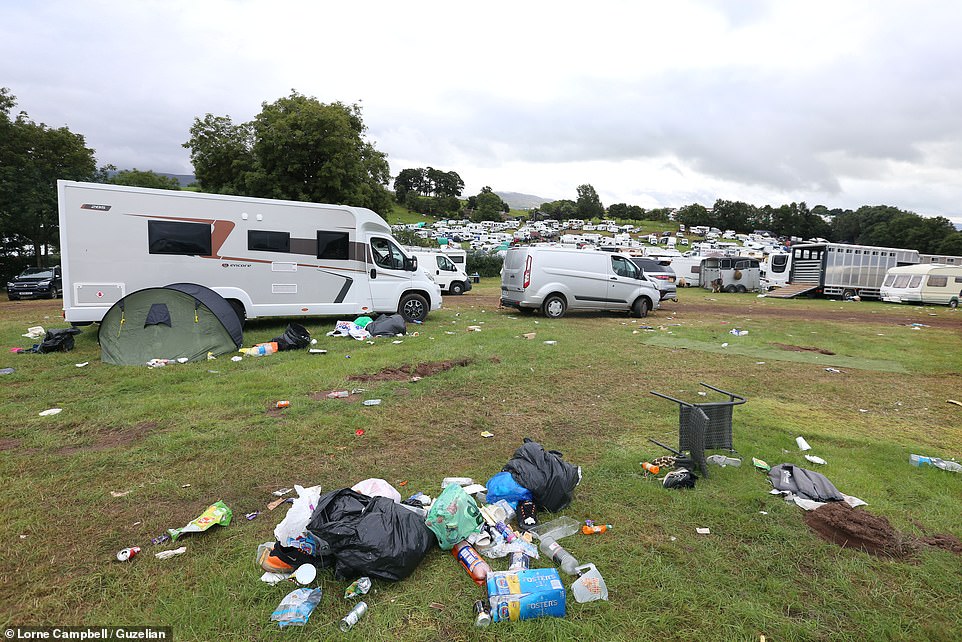 Bin bags, chairs and and other rubbish dumped on fields mean a big clean-up job for locals 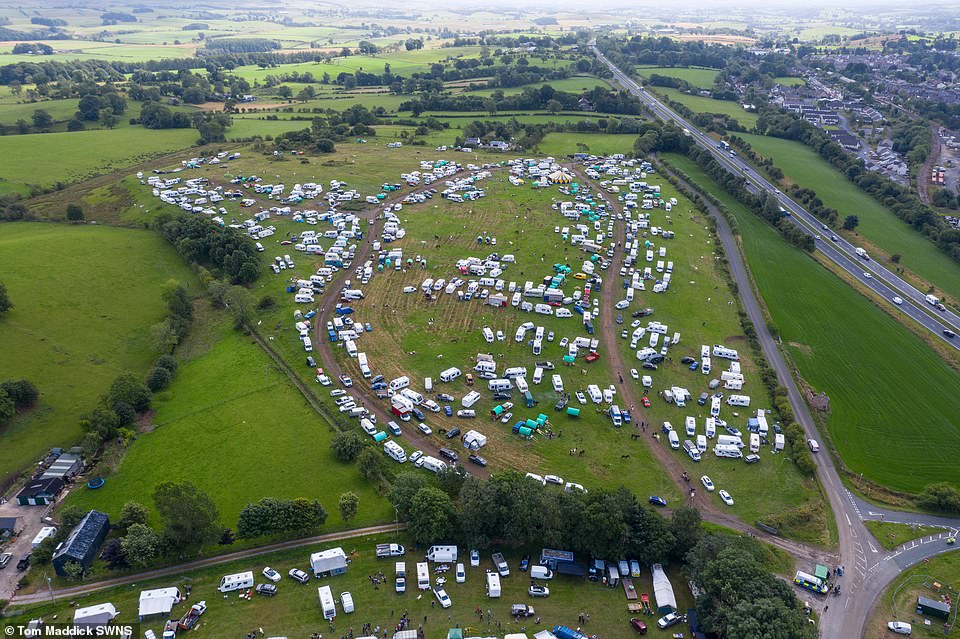 The moment travellers began to arrive Thursday at Appleby Horse Fair, Appleby-in-Westmorland in Cumbria. It is billed as the biggest tradition Gypsy gathering in Europe

Police said that at around 7am on Sunday, officers were told of a woman on Bridge Street, in the vicinity of St Lawrence’s Church, who was in distress and may have been a victim of a sexual assault in a field on the outskirts of the town.

Superintendent Matt Kennerley, Gold Commander for the police operation surrounding the fair, said: ‘Any suggestion of a sexual offence having taken place is taken extremely seriously, which is why the grounds of the church, where the woman was originally located, were closed off for much of yesterday (Sunday), allowing officers to carry out extensive enquiries.’

Detectives from the North Crime and Safeguarding Team are engaging with the woman to establish full details of the incident and provide support.

It came after violence put a dampener on the otherwise celebratory return of the fair, which celebrates the traveller community’s cultural heritage, after it was cancelled due to the coronavirus pandemic last year.

One 61-year-old local man was beaten up by a group of men while the fighting between rival families on Friday and Saturday saw one local describe the scene as something out of Dodge City.  At least four men have since been charged.

Cumbria Police announced they were sending in armed police teams after a tip-off that a simmering feud between two travelling families was on the point of escalating into serious violence. 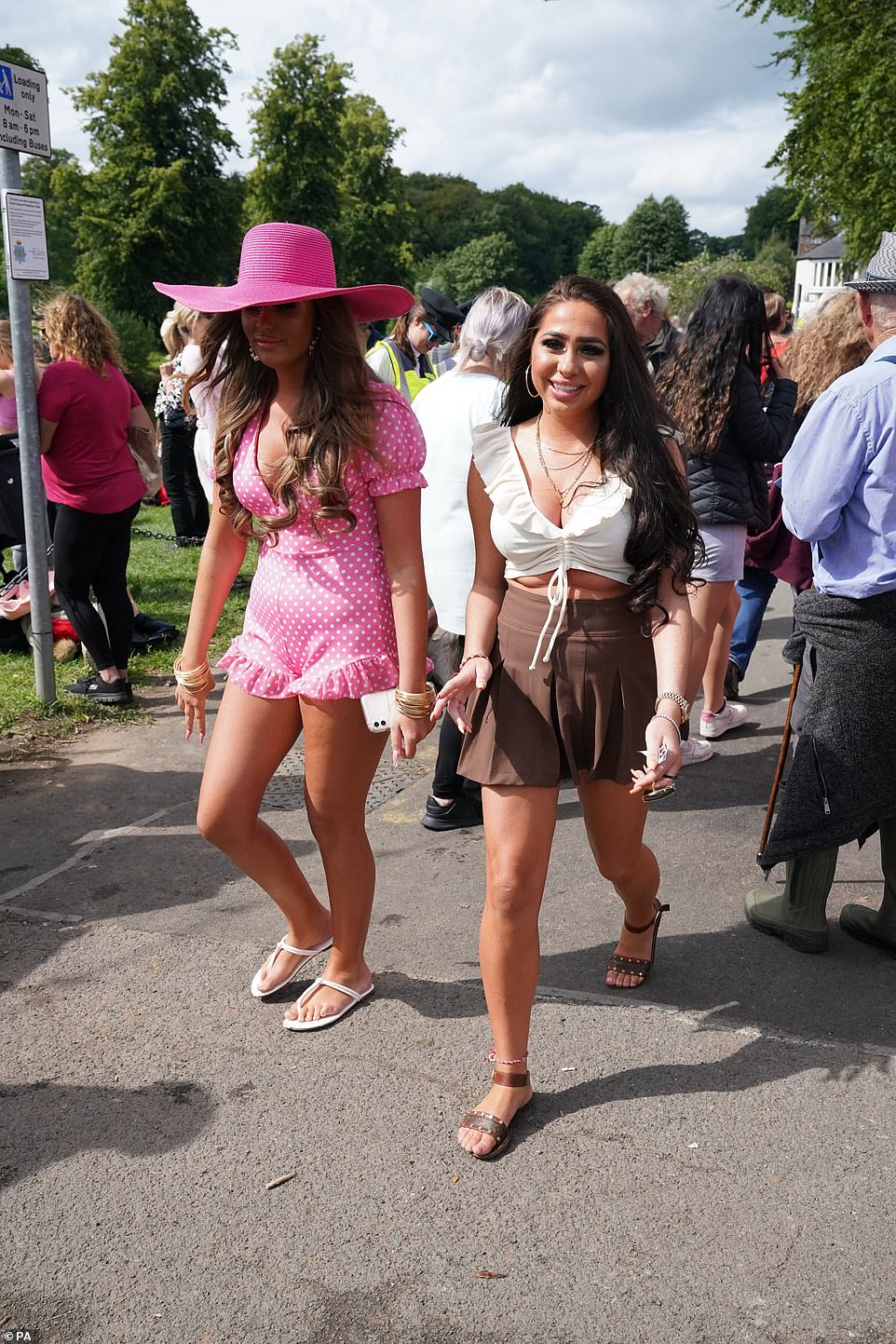 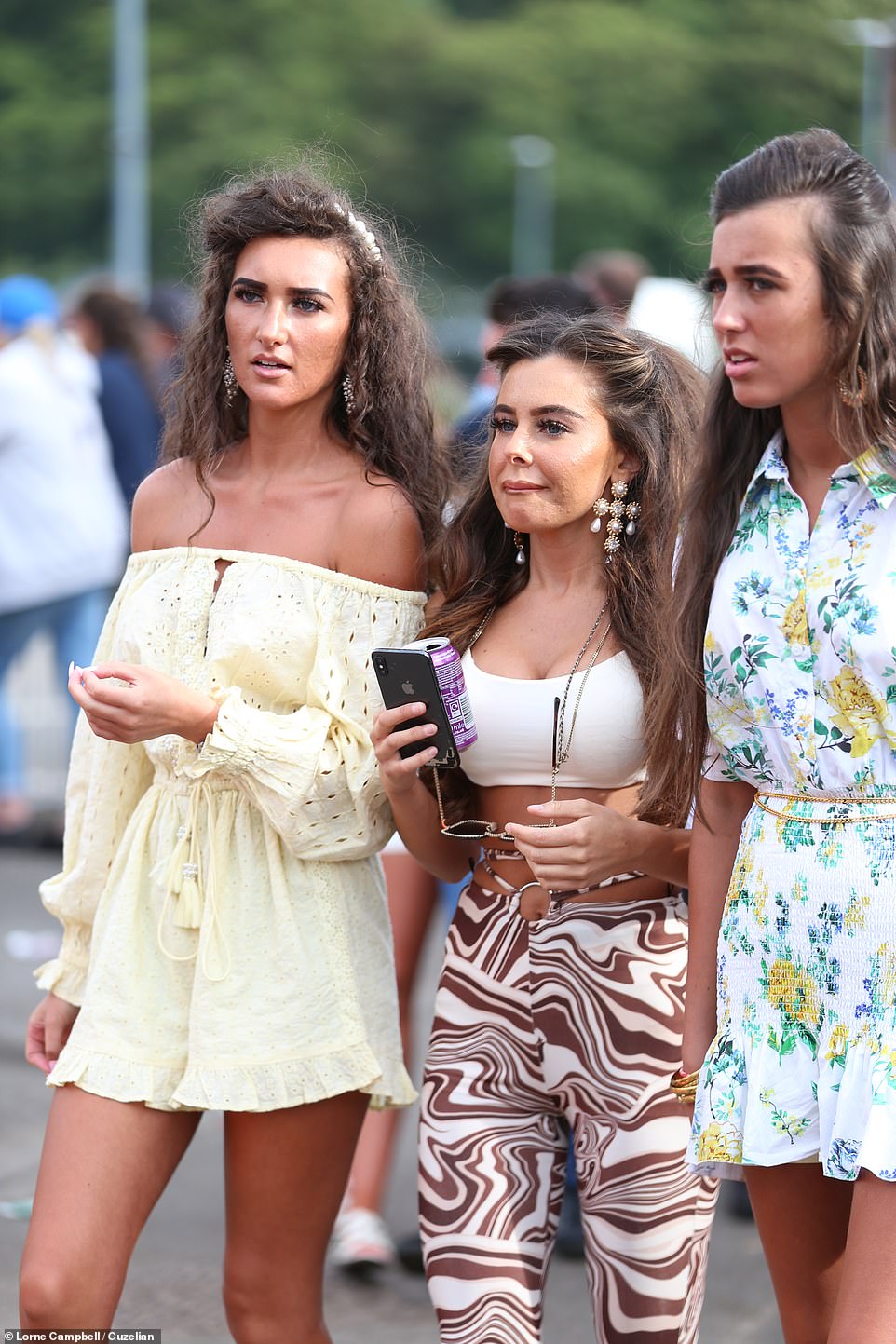 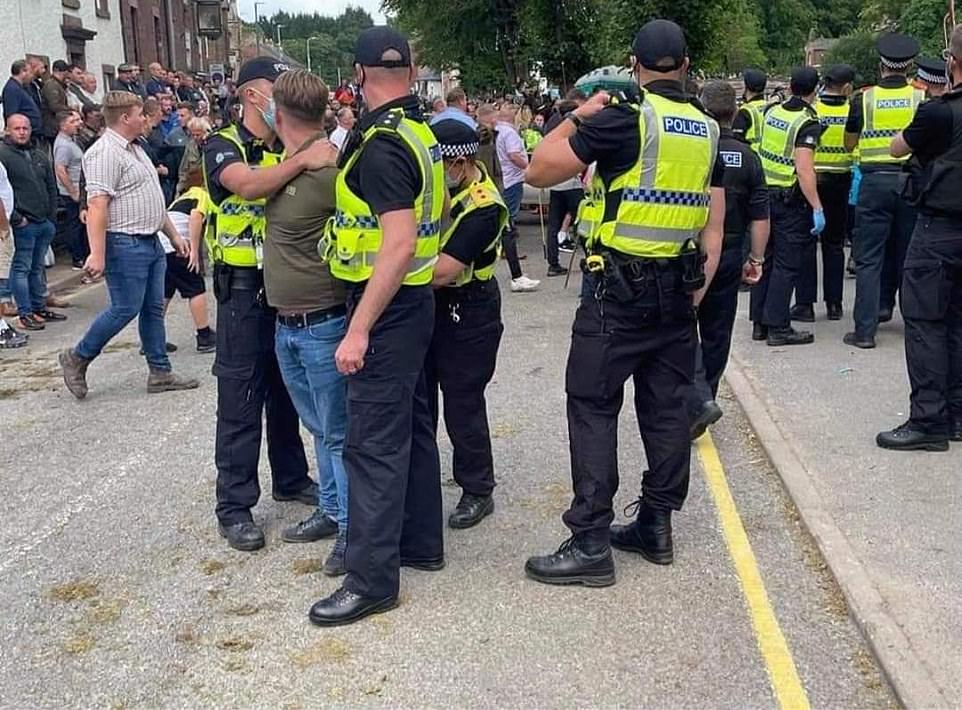 Cumbria Police had to implement an ‘immediate’ Section 60 order when violence erupted, which provided extra stop and search powers

It came after they received information that people were travelling to the fair with the intention of causing serious violence and disorder.

Superintendent Kennerley said at the time: ‘This is unacceptable and will not be tolerated.

‘Policing resources will be increased in key areas and at key times.’

Police also invoked section 60 powers, allowing them to stop and search anyone they deemed suspicious.

Supt Kennerley added: ‘These powers will help our officers to keep people safe.

‘However, I also urge anyone with information about potential disorder or any other type of criminality to contact the police.

‘Anyone who is seeking to come to the Fair to act violently is no friend to those of us – including Appleby people and the Gypsy and Traveller people – who wish for the Horse Fair to be an enjoyable and safe environment for all.’

Locals were also sickened to discover the area around a scout hut in Appleby was used as a makeshift toilet. 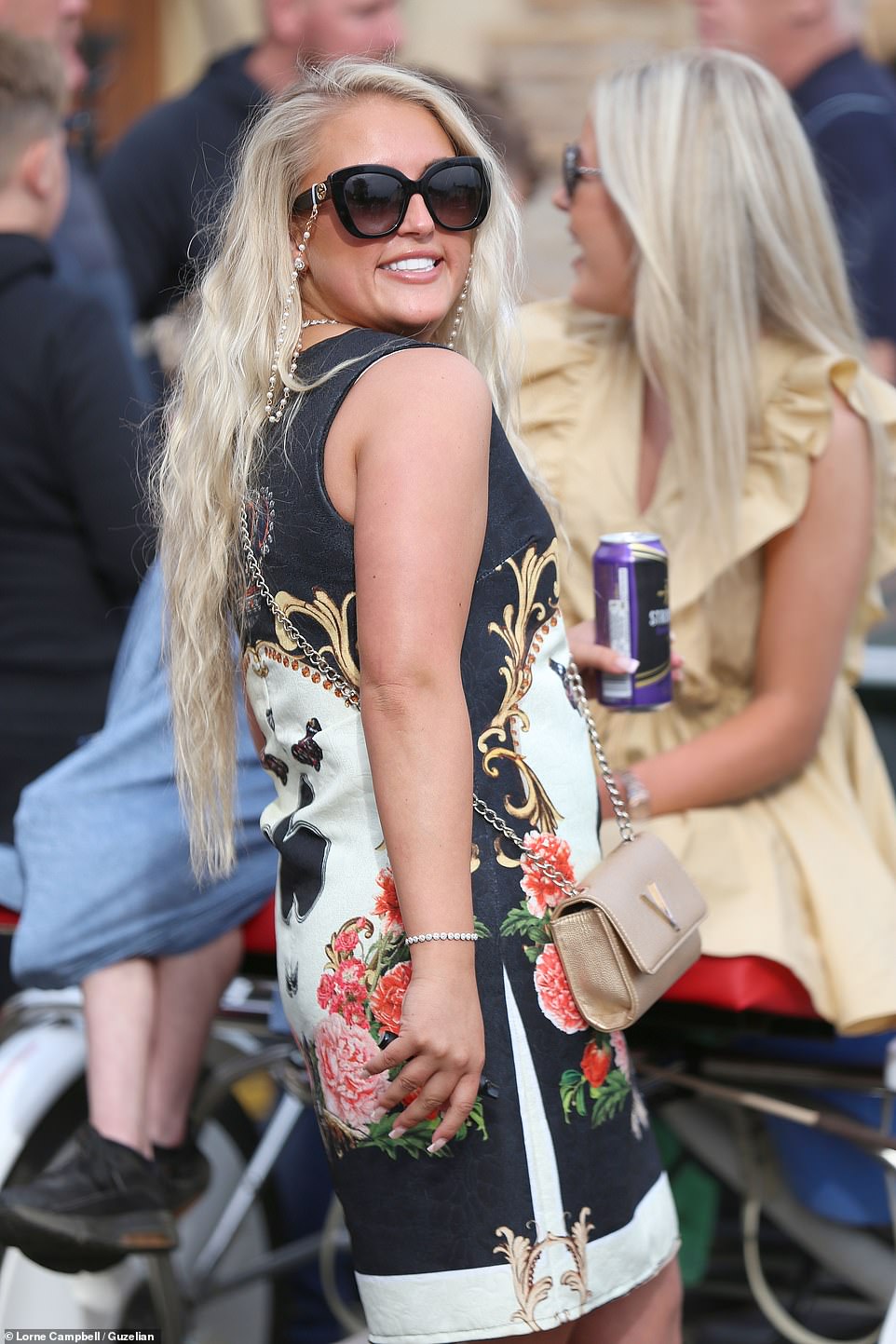 Smiling in the sunshine, one traveller opted for an elaborate patterned dress paired with a pair of oversized black sunglasses, featuring a pearl encrusted chain, and a diamante bracelet 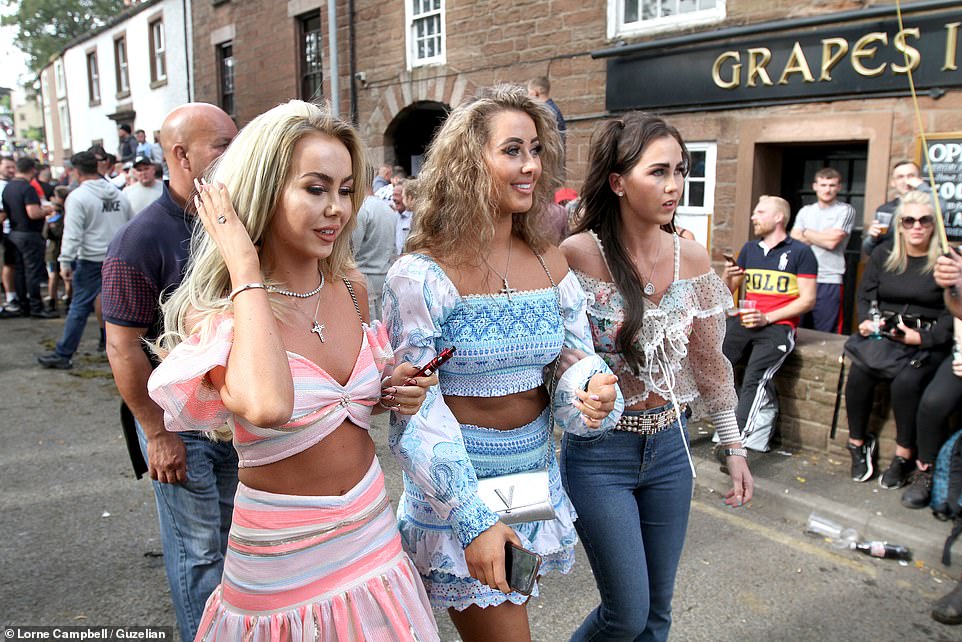 Crowds of women donning various designer goods strutted their stuff through the streets of Appleby-in-Westmorland, Cumbria for the annual gathering on Saturday afternoon 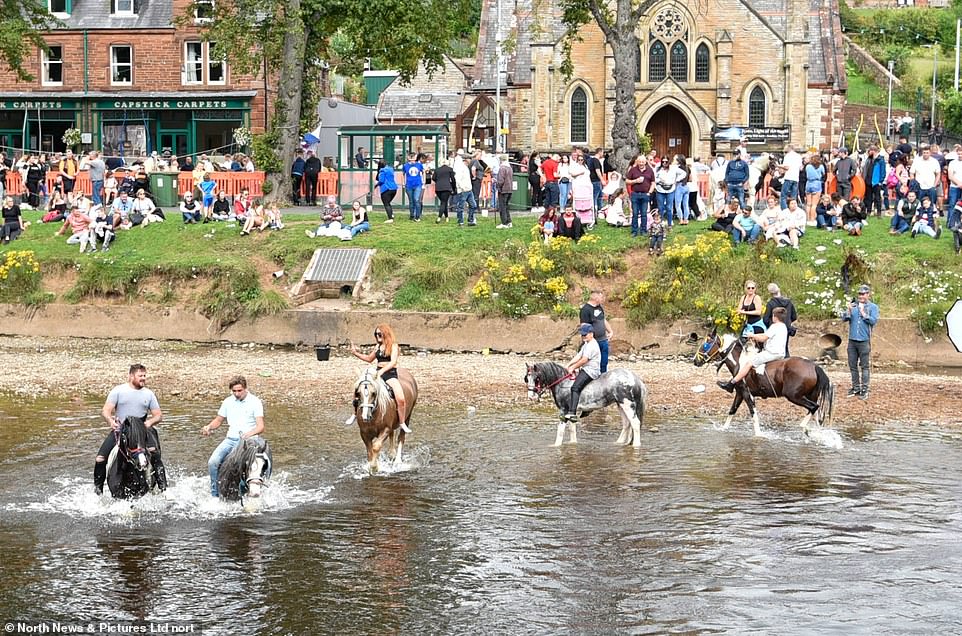 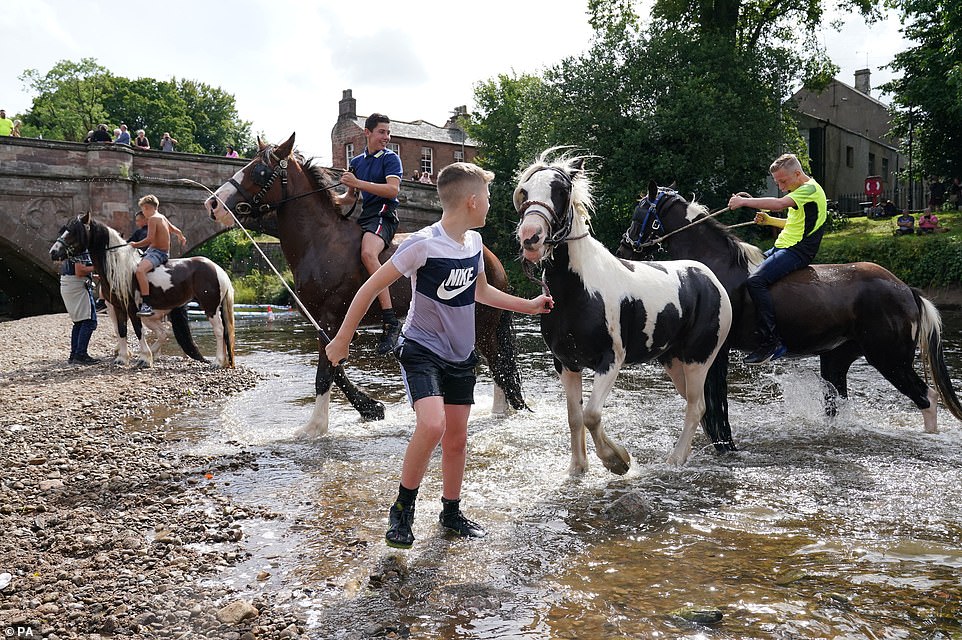 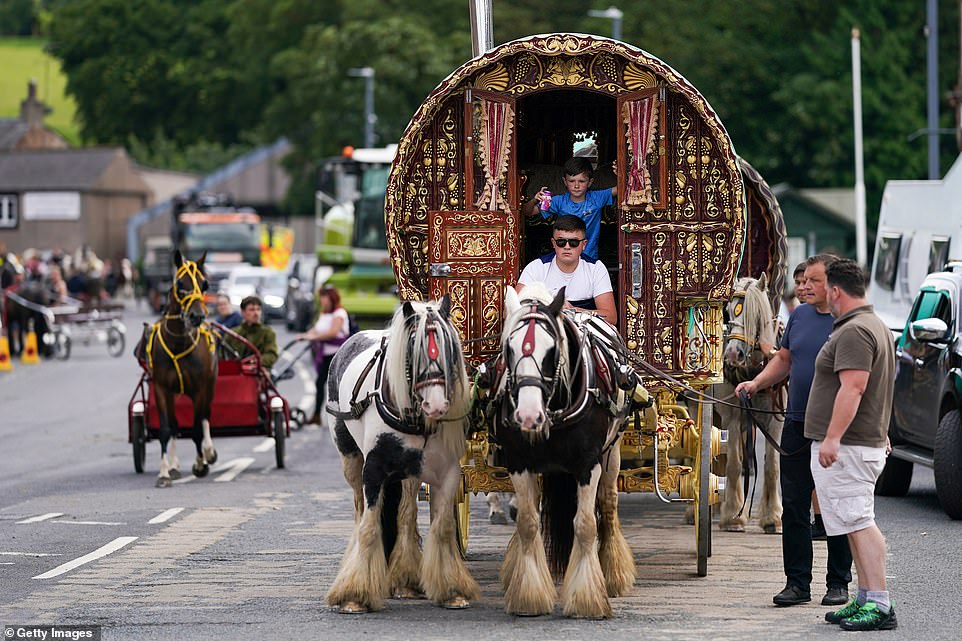 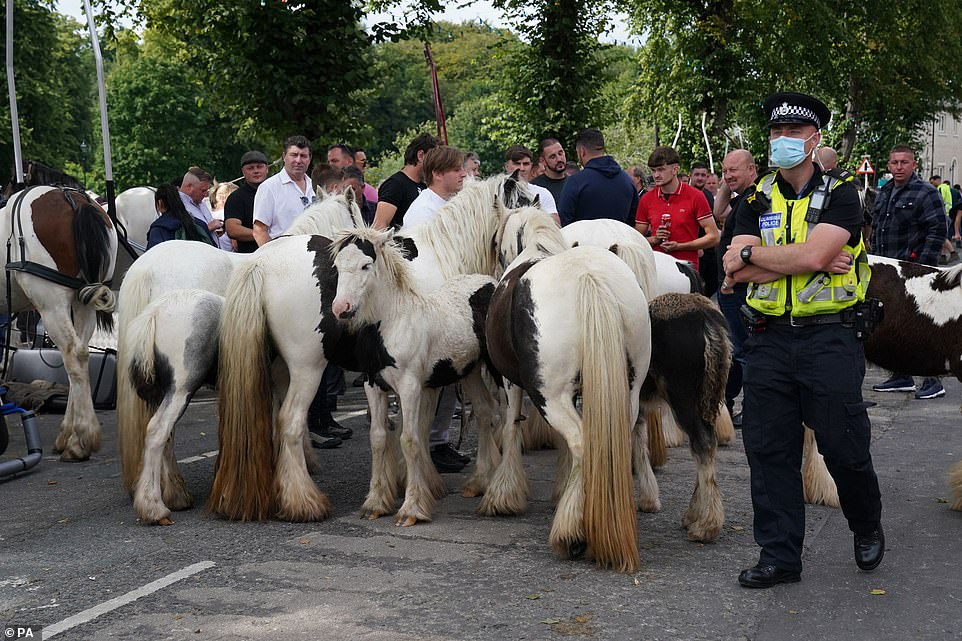 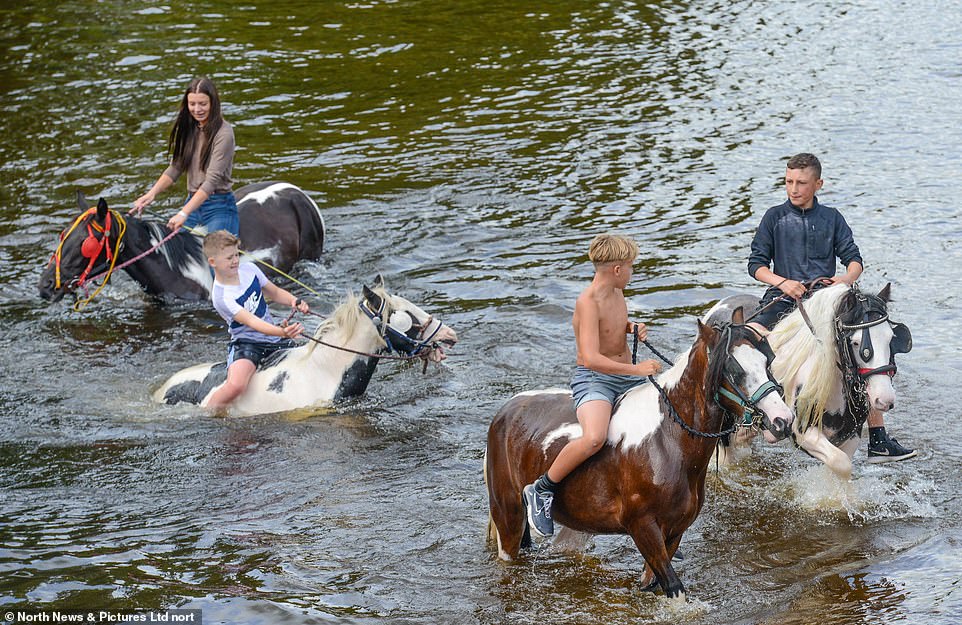 Not their first rodeo: Group of young friends walk their horses with ease in the River Eden at the Appleby Horse Fair 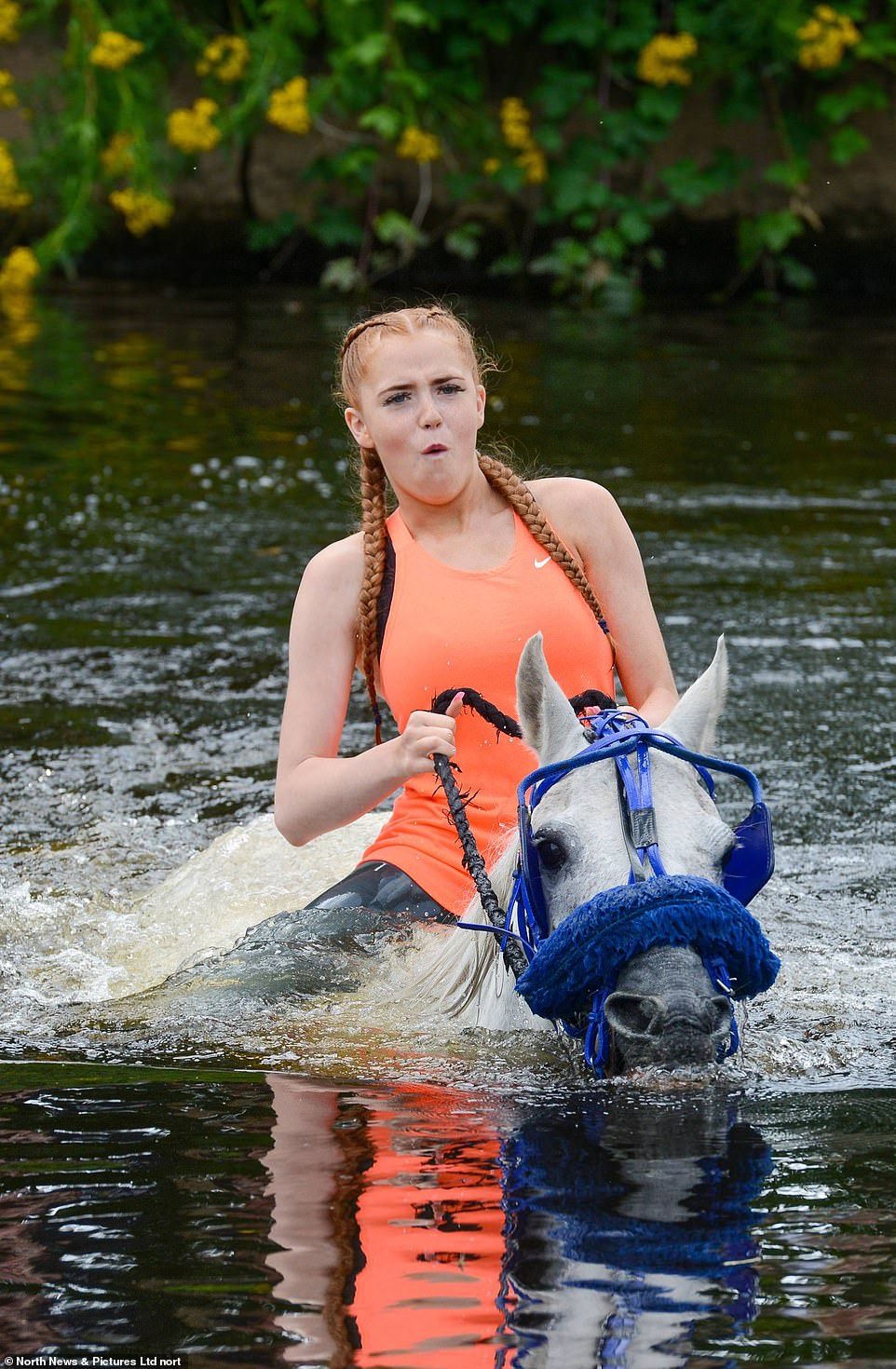 Soiled clothing and toilet paper were strewn around the hut as a leader of the scouting movement in the town called for volunteers to help with the clean up.

One local said: ‘This weekend says everything about why people in this town want to the fair stopped for good.

‘We had a brief reprieve last year but this time it’s returned to business as usual and it’s been appalling.’

Attendees are still leaving the town today, having arrived on Thursday.

Police said: ‘Please be aware that the roads surrounding Appleby will be congested today due to large volumes of traffic leaving the fair.’

The fair is billed as the biggest traditional Gypsy Fair in Europe.

Around 10,000 travellers are expected to have attended this year’s event, where they traditionally come to buy and sell horses.

It also offers an opportunity for the traveller community to come together to celebrate their heritage and culture.

The fair is usually held in early June outside the town of Appleby, in Cumbria, and attracts around 1,000 caravans, hundreds of horse-drawn vehicles, and up to 40,000 visitors.

York Ebor: Free bets, the world's best race and £4.7m up for grabs – all you need to know for summer festival

EXPLAINER: Why Haiti is prone to devastating earthquakes
World News