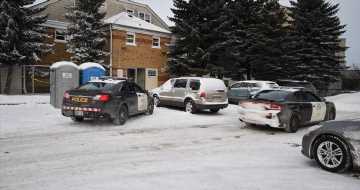 Collingwood and The Blue Mountains OPP say an investigation is underway after an incident resulted in the deaths of two people in Collingwood.

According to police, the incident took place on Tuesday shortly after 1:30 a.m. in the Georgian Blue area, formerly known as Matthew Way.

A neighbour in the area, Tammy Platchell, says she heard banging at around 1 a.m.

“I never thought anything of it. I just thought basically they were banging on the walls,” she said. “It sounded like gunshots — I don’t know if it was. And then all of a sudden, I heard yelling, and my dogs started barking.”

Platchell says that when she got up Tuesday morning, she looked outside and saw a body laying in a snowbank.

The OPP central region crime unit and OPP forensic identification services are assisting investigators, and officers are reminding the public to be vigilant of their surroundings and personal safety at all times.

According to police, the investigation is ongoing, and more information will be provided as it becomes available.

Democrats are now the ‘No Deal’ party

Watch: The moment Mariano Rivera found out he was Hall of Fame bound
World News