Home » World News » Police fear suspect 'got a lift' before mother and son, 9, were knifed 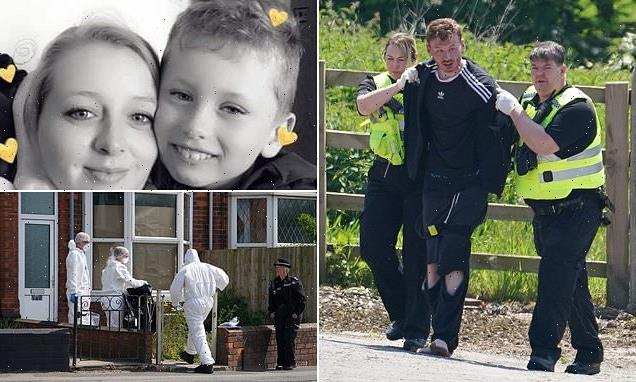 Police fear suspect 'got a lift' before mother and son, 9, were knifed

Did ‘double murderer’ get a LIFT to crime scene? Police fear killer ‘got 10-mile ride’ to village before mother, 26, and son, nine, were knifed to death – as it’s revealed suspect ‘tried to hijack woman’s car while making his escape

Detectives fear a murder suspect ‘got a lift’ to the village where a mother and her nine-year-old son were found stabbed to death.

Lincolnshire Police have launched an appeal for any witnesses to the 10-mile trip Daniel Boulton, 29, on Monday from Saltfleetby to Louth.

Boulton was arrested on Tuesday following a 15-hour manhunt after his ex-partner Bethany Vincent, 26, and her son Darren ‘DJ’ Henson, nine, were stabbed to death in High Holme Road, Louth, at around 8.29pm the previous day.

Boulton’s ten-month-old baby – who he shared with Miss Vincent – was found unharmed at the home on Monday, police confirmed.

The suspect – who remains in custody – was arrested barefoot at around midday at a farm near Louth, after a man banged on a neighbour’s car window shouting ‘let me in, let me in’.

Boulton has not yet been charged.

Both victims had suffered multiple stab wounds at an ‘absolutely devastating and dramatic scene’, the force said. 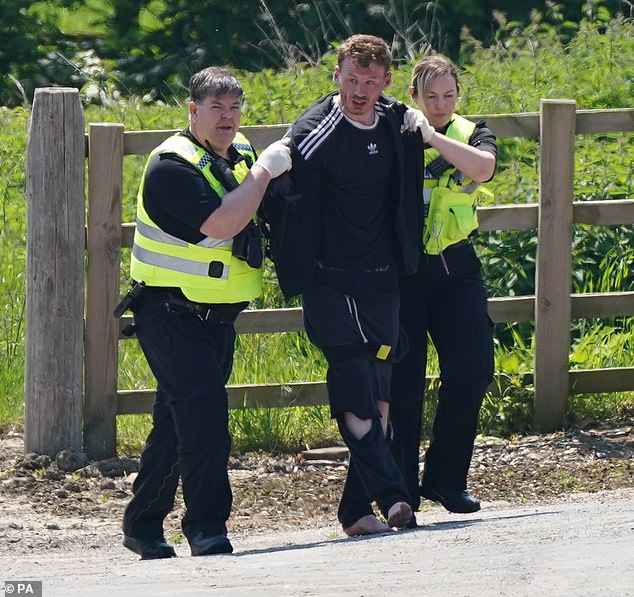 Detectives have said murder suspect Daniel Boulton ‘may have got a lift’ to the village where a mother and her nine-year-old son were found stabbed to death. Boulton was arrested (pictured) on Tuesday following a 15-hour manhunt 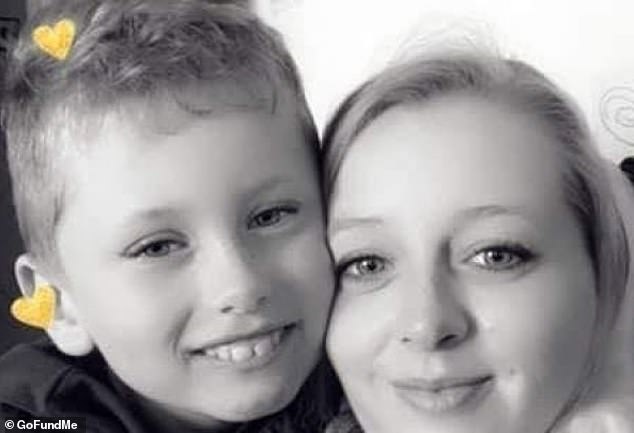 Miss Vincent and her son Darren, nine (pictured together) were found dead at her home in Louth 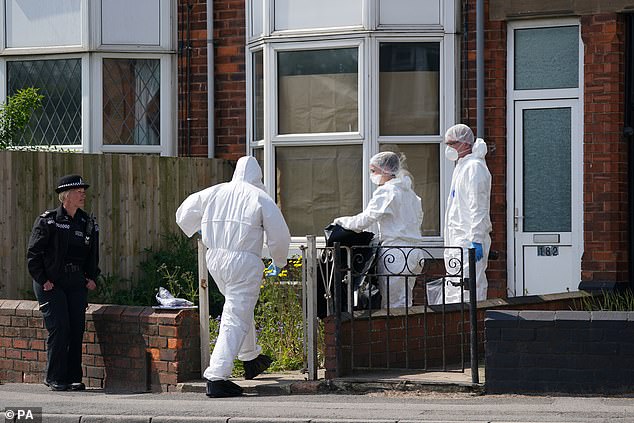 Boulton’s ten-month-old baby – who he shared with Miss Vincent – was found unharmed at the home on Monday, police confirmed. Pictured: Forensic officers at the house on Tuesday 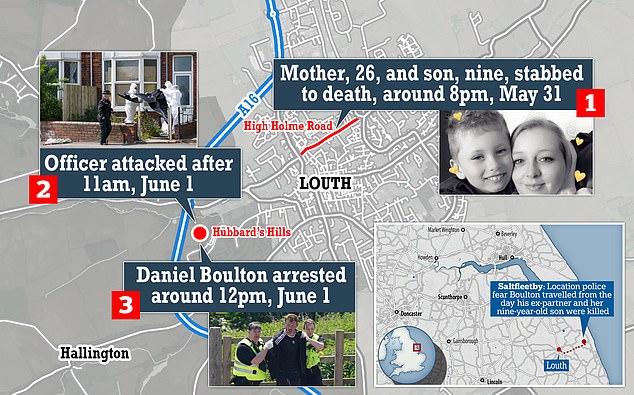 A knife believed to have been used to inflict the injuries was recovered.

An off-duty Lincolnshire Police officer was also injured in the Hubbard’s Hill area of Louth on Tuesday morning amid the manhunt for Boulton.

A neighbour at the scene of where a man was arrested in connection with the double stabbing told how she managed to escape after he banged on her car window.

The woman – who asked not to be named – said after the man attempted to get into her car, she drove down the road to where she had seen police vehicles in nearby Hubbard’s Hills.

Forensic officers also appeared at the scene of the arrest around four hours later.

Armed officers and several police vehicles were involved in the arrest at the farm in Hallington, near Louth.

Two officers in high-vis jackets escorted a man into a police van around the back of a farm building. He was wearing no shoes or socks, ripped tracksuit bottoms, an Adidas T-shirt and a Nike jacket.

An air ambulance and a number of police vehicles could be seen in the Hubbard’s Hill area where a police officer was injured.

Darren had been dropped off at the Louth address by his father, Kieran Henson, 28, on Monday afternoon, following a trip to stay with his grandmother for the weekend.

Distraught Michelle Sanders fought back tears on Tuesday as she paid tribute to her ‘football mad’ grandson.

Speaking at her home in Earlsdon, Coventry, Mrs Sanders, 47, said: ‘It’s surreal that Darren was with me 24 hours ago and now he is gone. 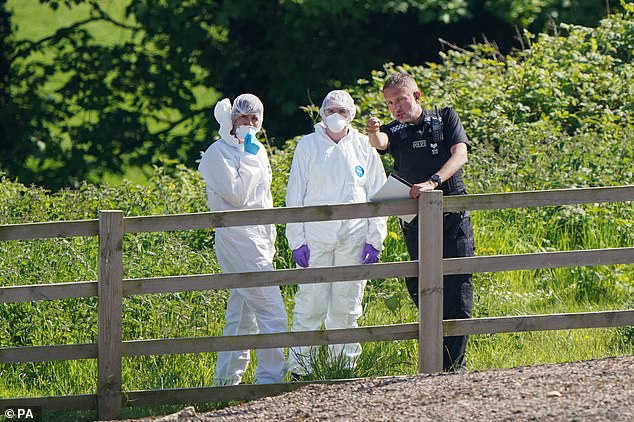 Forensic officers at Hallington House Farm on the outskirts of Louth, Lincolnshire, after a man was detained by officers on Tuesday 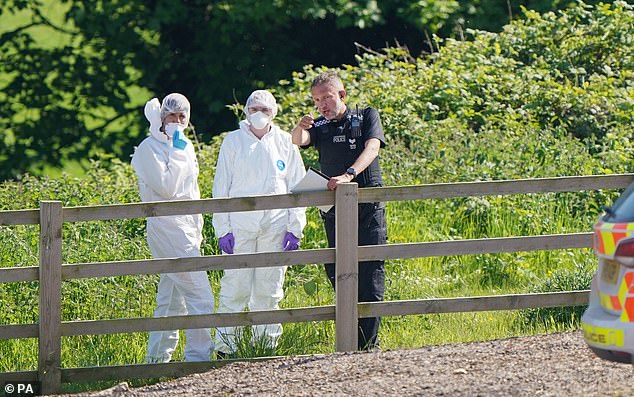 ‘He was a happy child with a kind heart. We all thought the world of him. Kieran brought him down to visit for the weekend after school on Friday… Kieran dropped him home with his mum at 4pm [on Monday] and by 8pm this had happened – they were dead.’

She added: ‘Darren was a Chelsea fan but he liked all football. We watched them in the Champions League final together on Saturday night and I was deaf by the end of it because he was cheering so much.’

Louth residents have launched a fundraising campaign to cover the cost of Miss Vincent’s and Darren’s funeral.

A post on the GoFundMe page says: ‘Let’s help support this family. Louth is a small town. You may not know the family as I don’t but we can all say we can all sympathise with the family.’ 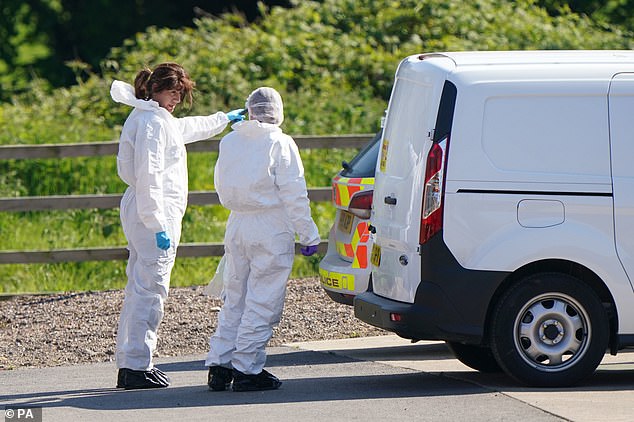 Mr Henson met Miss Vincent after moving to her home county of Lincolnshire. The couple split up when Darren – who was severely autistic according to Mr Henson’s friends – was young, but remained on friendly terms.

Miss Vincent started a relationship with Boulton, from Skegness, and gave birth to their own son last year, but they had since separated.

The ten-month-old baby was found unharmed at the home on Monday, police confirmed.

Police said no-one else was injured at the property where the stabbing happened, but another young child was found there and they have since been safeguarded.

Detective Inspector Andy McWatt, from the East Midlands Special Operations Unit, said: ‘Daniel Boulton may have got a lift from Saltfleetby to Louth on May 31.

‘If you have information relating to this, please get in touch.

‘Our investigation continues at a pace, and even a sighting or any piece of information – however small you think it may be – could prove vital.’

Who is Naftali Bennett, the man poised to topple Netanyahu?