A council ban on people erecting political signs in the hotly contested federal seat of Goldstein is at odds with state planning regulations, with the government saying on Tuesday that Victorians were free to promote candidates. 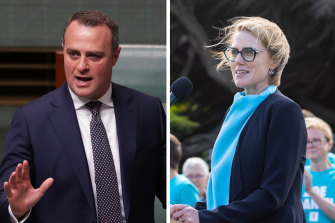 Independent candidate Zoe Daniel’s campaign manager will challenge the ban in the Supreme Court on Wednesday.

Planning Minister Richard Wynne would not comment specifically on the ban because it is before the Supreme Court, but he said on Tuesday that the state’s planning controls were “clear” and political signage was allowed.

“Advertising signs no larger than five square metres publicising information about a candidate for an election must not be displayed for longer than three months or 14 days after the event is held,” Mr Wynne said. “It does not require an election to be called.“

Residents who erect signs have been threatened with a $909 fine under the Bayside ban, though no penalties have been issued.

Just days before the ban was enacted, Goldstein’s Liberal MP Tim Wilson emailed supporters asking them to tell him the address of any property in the council area displaying a sign supporting Ms Daniel.

The state government said it was unaware of any other council banning political signage in the decades-long history of the planning regulations.

“As a community-backed independent seeking a level playing field, myself and my supporters merely want a clear and independent interpretation of the rules,” she said.

The Bayside ban on signs reversed an earlier council ruling in December.

The Age has consulted some of the state’s most senior planning experts and lawyers, all of whom claim that the council’s ban is wrong.

Stephen Rowley wrote The Victorian Planning System, a textbook used in the state’s universities where urban planning is taught.

He said Bayside’s ban until a federal election was called was “completely untenable”.

“Local councils are not the Australian Electoral Commission,” Dr Rowley said. “Their job is to manage impacts from inappropriate signage.” 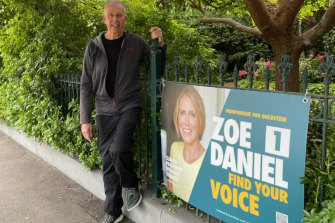 Zoe Daniel’s campaign manager Keith Badger with the sign on his front fence.

Dr Rowley said planning laws relating to electoral signs were there to allow political advertising signage, not to ban it.

The rules also ensured signs did not become permanent billboards, with laws limiting their display to three months before an election and two weeks after the poll was finished.

“Until a sign has been up for more than three months, or for more than 14 days after the election, I can see no basis for this [Bayside] ruling,” he said. 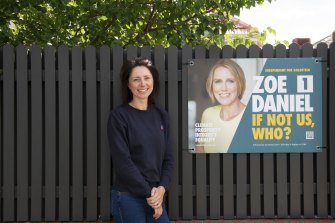 Hampton resident Lana Dacy is a supporter of Ms Daniel, a former ABC journalist whose campaign is centred on climate change.

To help fundraise for Ms Daniel’s campaign, she bought a sign for $20 and put it on her front fence. Later, she bought a larger one to increase the candidate’s prominence.

Last Tuesday, Ms Dacy got a letter from Bayside City Council, warning of a $909 fine unless she took down the sign, which she did.

After the council promised Ms Daniel’s lawyers it would not fine residents until after Wednesday’s court hearing, she reinstated her sign.

Ms Dacy said if the Supreme Court ruled in Bayside’s favour, every Victorian with a political sign on their front fence must be made to take them down.

“If we have to take down our signs, I assume that means everyone in the state has to take down their signs,” she said.

The Liberal Party holds the seat of Goldstein by a margin of 7.8 per cent, but is facing well-resourced opposition.

Mr Wilson said he was relaxed about any ruling by the Supreme Court and he simply wanted all candidates to play by the same rules.

“We just want consistency,” said Mr Wilson, who is the assistant energy and emissions reduction minister.

Lawyers for Ms Daniel’s campaign have written to state and federal attorneys-general to explain the national significance of the court case for freedom of political communication.

Federal Attorney-General Michaelia Cash would not comment on the ban because it was a matter before the court.

In the neighbouring Stonnington municipality, Liberal MP for Higgins Katie Allen was this week urging her supporters to put up signs in their front yards.

“One of the ways you can help me take care of you and our shared home of Higgins is by showing your support! If you’re able to host a sign like this please reach out!” Ms Allen said on Instagram on Saturday.

Meet Godolphin's Dubai Crown Prince Fazza, who trains with Ronaldo, is mates with Khabib, and is heir to £3bn fortune
World News