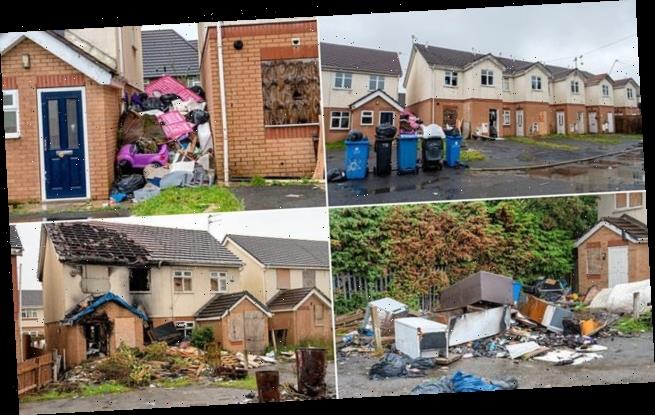 Pictures show reality of life on Liverpool's most dangerous estate

Torched houses, boarded-up windows and a fly-tipper’s paradise: Life on Liverpool’s most dangerous housing estate where homes go up for auction for 99p and police are called 10 times a day

Tucked away on a seemingly normal street in Huyton, Liverpool, you’ll find Primrose Court which has been described by those who live there as Liverpool’s most dangerous estate.

The eerie estate is full of burnt out and boarded up houses which have been left abandoned.

According to its residents, it was once just like any other street, full of nice well-kept family homes.

But when a group of new families moved in in June 2018, locals say things soon took a turn for the worse.

Walking around the 18-house estate today you’ll find piles of upturned furniture dumped in the gardens, smashed glass and boarded up windows.

Here’s what locals had to say about the estate and what action they think needs to be taken. 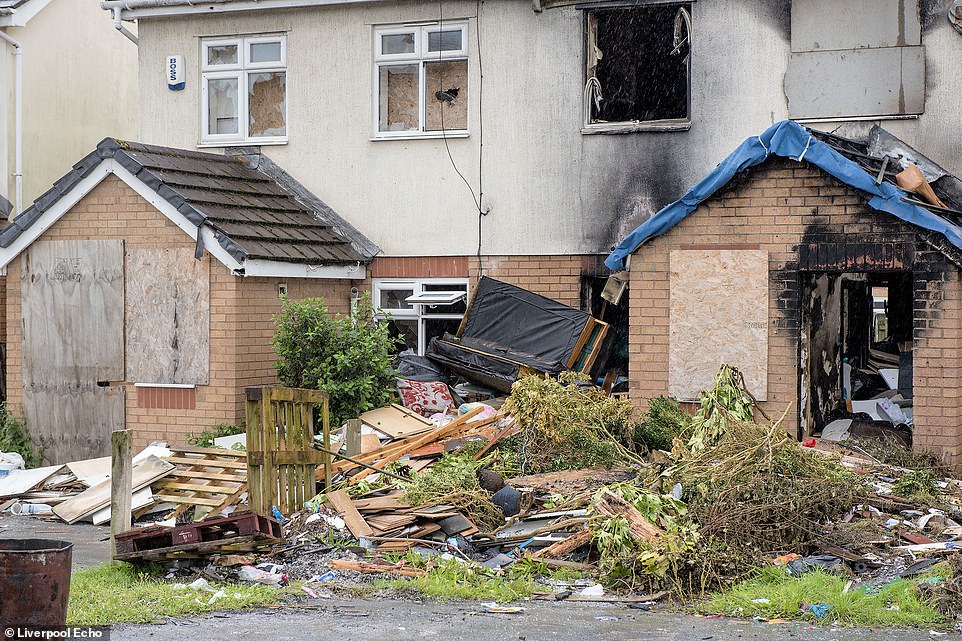 Shocking pictures show the Primrose Court estate which some residents have described as the most dangerous street in Liverpool as houses have been left abandoned, with some burnt out while others are boarded up behind mounds of rubbish 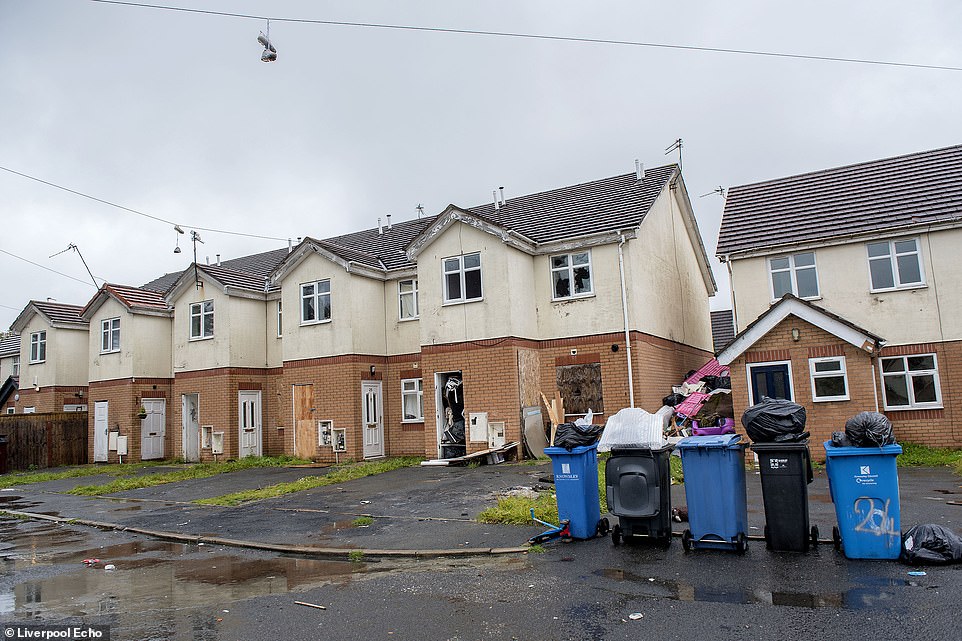 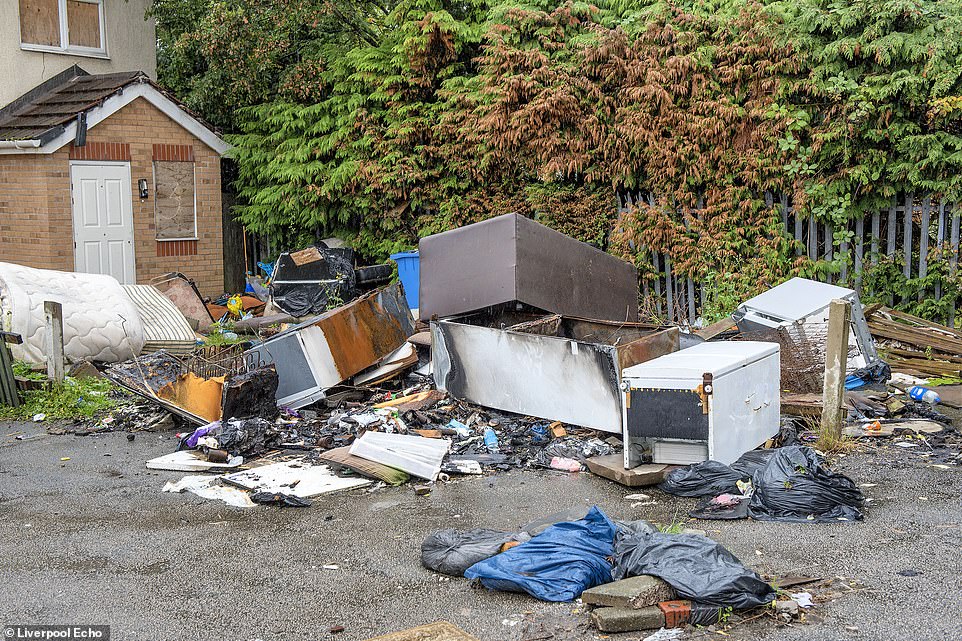 One woman who has asked not be named, said she lived in a house on Primrose Court for seven years until she couldn’t take anymore.

She said the problems first started two years ago after a family moved into one of houses.

She said: ‘It was nice when I first moved in. They were lovely houses.

‘It went really bad around June 2018. One family moved in and the next minute they all turned up.

‘That was when it all went down hill.’

The woman said the situation got so bad that her children witnessed serious violence while playing out in the front garden.

She added: ‘They were always in my front garden fighting, drinking and dumping rubbish.

‘You’d have taxis pulling up and they’d be threatening the taxi drivers with baseball bats.

‘Police are here ten times a day going around the estate.’

After the families moved out of the houses, the woman said kids living in the area continued to vandalise them by smashing up windows.

Photos show piles of rubbish from abandoned mattresses and sofas to overflowing bin bags wedged between the properties. 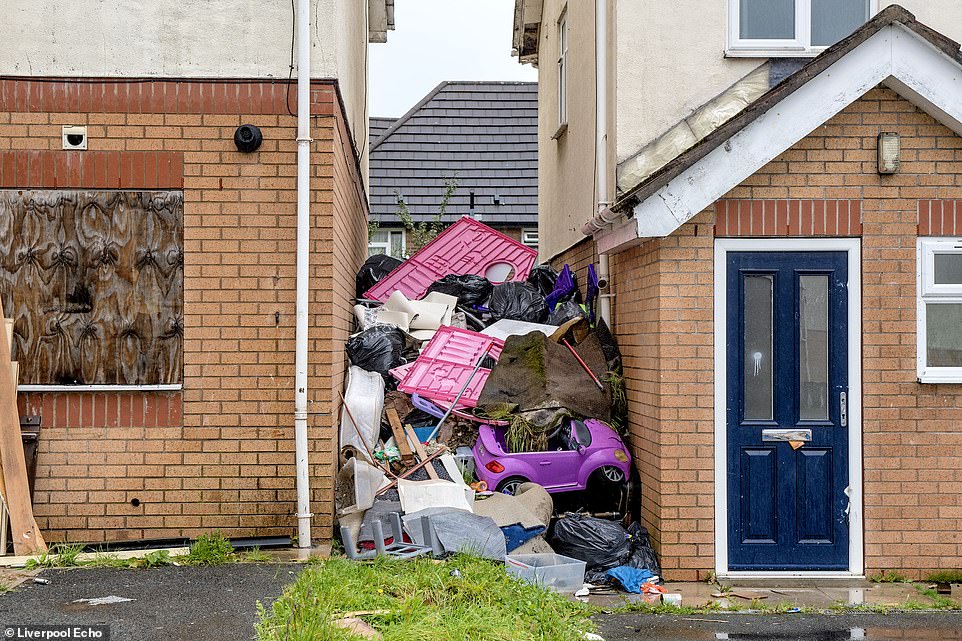 Despite troublesome families moving out, neighbours say kids with nothing better to do continued to vandalise empty homes 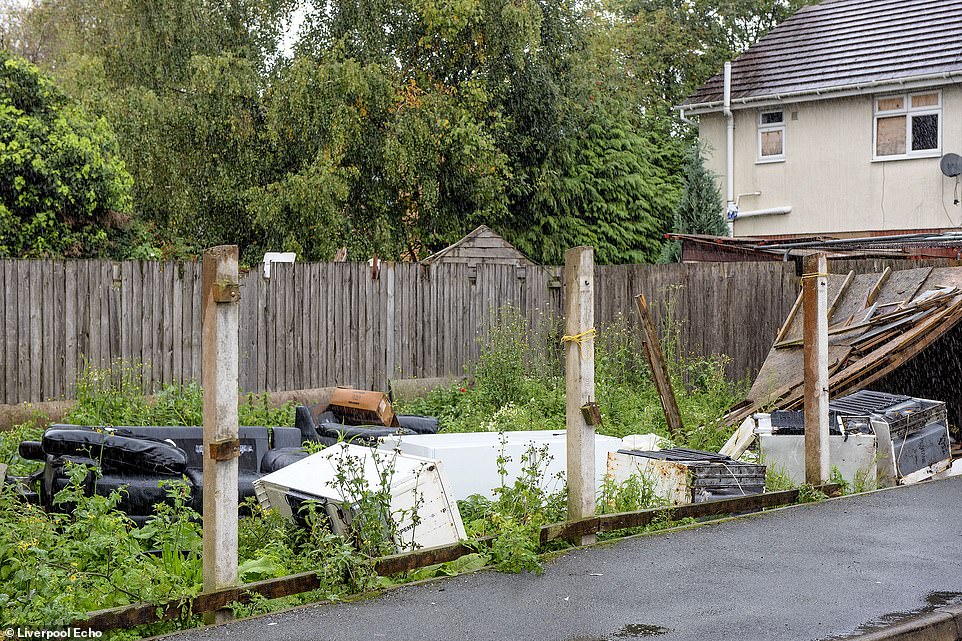 One property has been so badly damaged by a fire that half of its roof has been burnt down.

A Knowsley Council spokesperson said: ‘Fly tipping is a blight on our communities and sadly, as has been the case across the UK, has seen an increase during the coronavirus pandemic.

‘We are appalled by the ongoing issues at this location and appeal to our residents and communities to come forward with any information they may have.

‘Fly tipping is a crime and we take robust action against those who are responsible, which can result in a fine or prison sentence.’

Paul Mangan, 51, lived in a house on the corner of the close until three months ago, when he was kicked out following a dispute with his landlord.

The 51-year-old said it started then the families moved in two years ago and since then they have become an easy target for kids who ‘have nothing else to do’.

Paul said: ‘You didn’t know when the house next door was going to go up.

‘We try to stop the kids from burning them down but there’s nothing else for them to do.’

Just a few months ago Paul said three of the houses were put up for auction with a starting bid of 99p.

But he claims nothing has changed since then with the houses that sold.

‘I think the council should take them all and do them up properly. It’s one of the most dangerous areas in Liverpool.’

One man who asked not to be named for fear of repercussions for him and his family, said he felt unsafe living near the estate but had no other choice.

He said: ‘We’ve had a lot of problems with anti social behaviour. I think that’s why no one wants to take these properties.

‘I was new here in Liverpool. I never imagined it would be this way.’

He described Primrose Court and the surrounding streets as ‘one of the most dangerous area in Liverpool’, with teenagers regularly riding around on bikes with their faces covered and running way from police.

The man added: ‘I was riding my bike when a couple of teenagers tried to throw stones at me. They tried to push me off to take my bike. 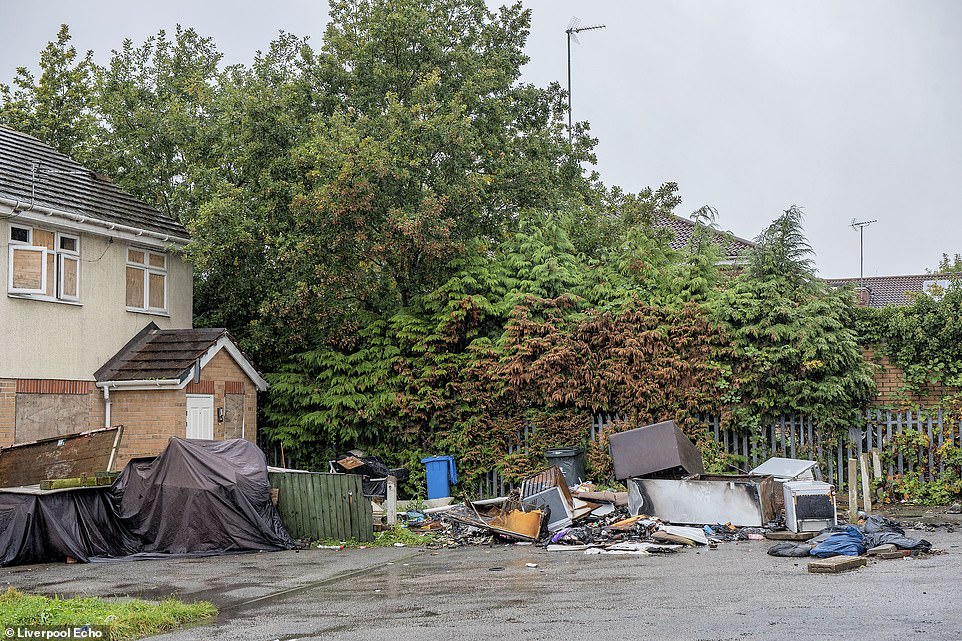 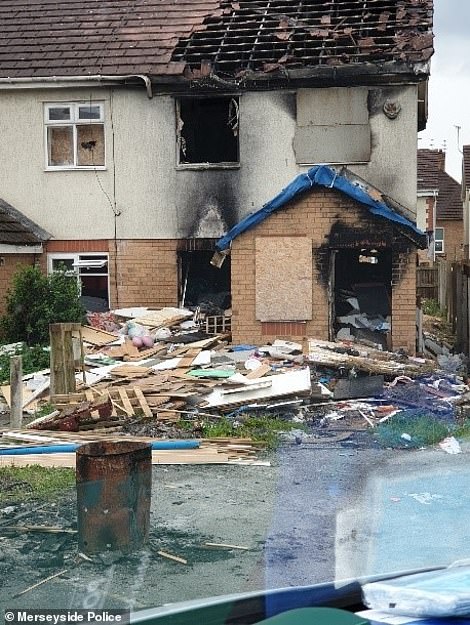 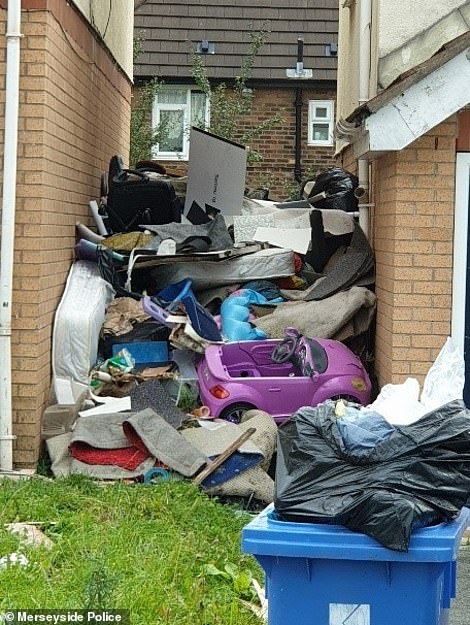 ‘They’ve tried to steal my motorbike a few times. I’ve reported it a couple of times to the police.’

On August 26, officers from Merseyside Police carried out a day of action in the area, along with Knowsley Council’s Crime and Communities, Environmental Health and Street Scene Teams and Merseyside Fire & Rescue Service.

They were also joined by the Police and Crime Commissioner’s Office and British Gas.

The force said the day involved ‘targeting those involved in serious violence and antisocial behaviour, whilst engaging with and reassuring the public’.

On the day, officers arrested a 37-year-old man on suspicion of abstracting electricity and drugs offences.

Chief Inspector Phil Mullally, Knowsley’s Local Policing Team said: ‘The local community will have noticed officers in this area regularly and we continue to be a visible presence to both tackle crime and anti-social behaviour but also to reassure the community that we’re here for them.

‘I would urge the community to contact my team with information of those involved in crime and those who may be having a negative impact on the area. We’re determined to tackle community concerns in Primrose Court, working with our partner agencies to have a long-term positive impact.’ 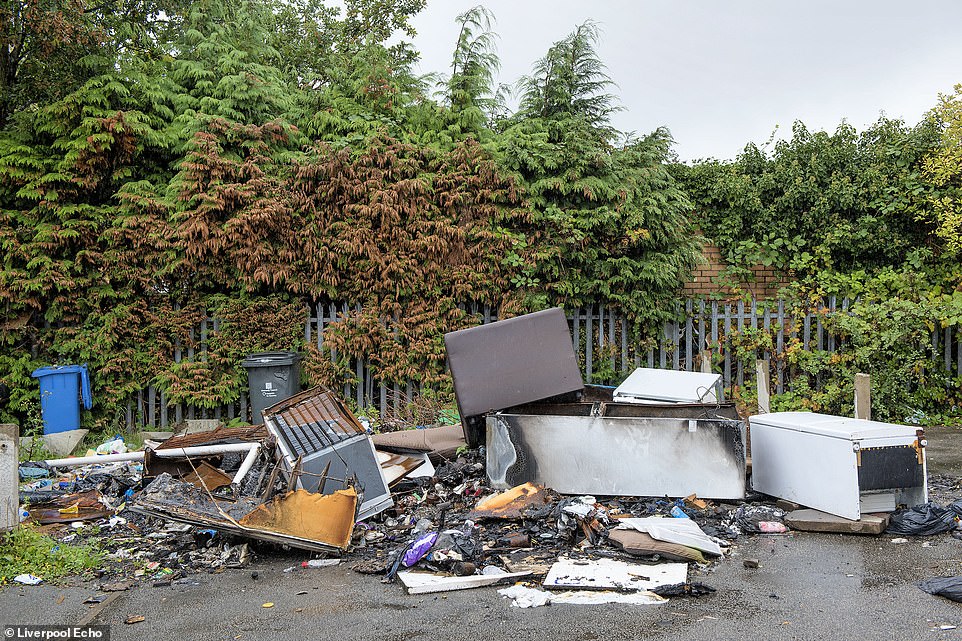 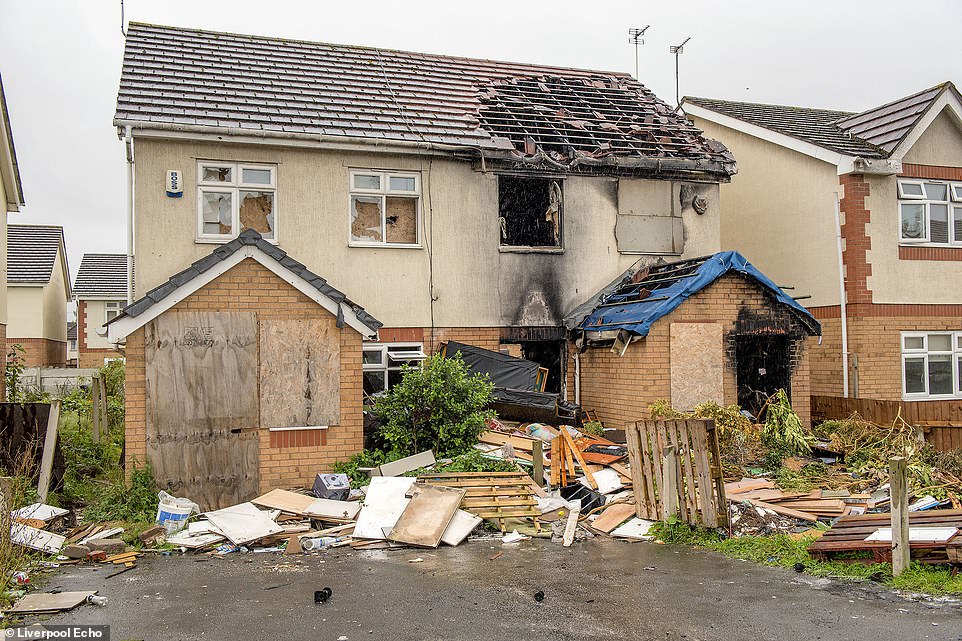 Cllr Shelley Powell, Cabinet Member for Neighbourhoods and Communities, said: ‘Our message is clear – we will not tolerate crime and ASB in our borough, and the Day of Action embodies all the hard work being done behind the scenes by ourselves and partners to tackle the concerns that matter to our residents.

‘As a partnership we have developed a strategy in order to bring about positive change and we are taking a holistic approach in order to create a safer borough for Knowsley’s residents.’

Sgt Mark Wilson, who spent the day at Primrose Court added: ‘[The day of action was] a real show of partnership activity and I hope the public see us working with the local authorities and other partners as a positive tool to reduce crime in the area and increase the safety of those living there.

‘Work is still ongoing in Knowsley to ensure our communities are free from harm and deployments like these will form a key part of our attempt to find those responsible for committing crime and putting others at risk.

‘If you would like to get in touch because you know someone involved in crime or want to report something else to us, please DM us @MerPolCC or contact @CrimestoppersUK anonymously.

‘Thank you to the wider public for your continued support, this is hugely appreciated and invaluable when it comes to taking dangerous people, weapons and substances off our streets.’

French & Saunders fans: this new podcast series is for you
World News