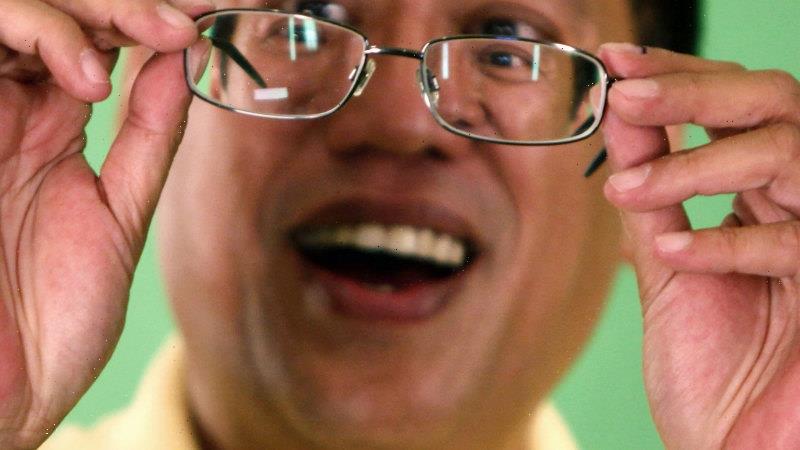 Manila: Former Philippine President Benigno Aquino III, the son of pro-democracy icons who helped topple dictator Ferdinand Marcos and had troublesome ties with China, has died, a cousin and public officials said. He was 61.

Former senator Bam Aquino said he was heartbroken by the death of his cousin. “He gave his all for the Filipino, he did not leave anything,” he said. 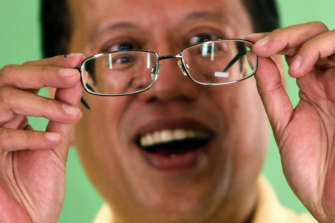 Then still a candidate, Benigno Aquino checks his glasses prior to a live television interview in 2010.Credit:AP

Details of his death were not immediately made public by members of his family, who were seen rushing to a metropolitan Manila hospital on Thursday morning. But one of his former cabinet official, Rogelio Singson, said Aquino had been undergoing dialysis and was preparing for a kidney transplant.

Condolences poured in from Philippine politicians, the Catholic church and others.

Aquino, who served as president from 2010 to 2016, was the heir to a political legacy of a family that has been regarded as a bulwark against authoritarianism in the Philippines.

His father, former senator Benigno Aquino jnr, was assassinated in 1983 while under military custody at the Manila international airport, which now bears his name. His mother, Corazon Aquino, led the 1986 “people power” revolt that ousted Marcos. The army-backed uprising became a harbinger of popular revolts against authoritarian regimes worldwide.

Although a scion of a wealthy land-owning political clan in the northern Philippines, Aquino, who was fondly called Noynoy or Pinoy by many Filipinos and had an image as an incorruptible politician, battled poverty and frowned over excesses by the country’s elite families and powerful politicians. One of his first orders that lingered throughout his presidency was to ban the use of sirens in vehicles that carried VIPs through Manila’s notorious traffic jams. 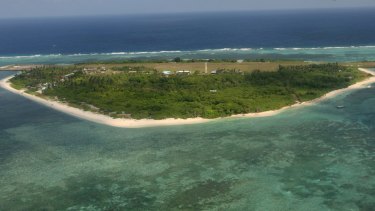 Pag-asa, part of the disputed group of islands in the South China Sea off the coast of western Philippines.Credit:AP

Aquino, whose family went into exile in the US during Marcos’s rule, had turbulent ties with China as president. After China effectively seized a disputed shoal in 2012 following a tense stand-off between Chinese and Philippine ships in the South China Sea, Aquino authorised the filing of a complaint before an international arbitration tribunal in The Hague that questioned the validity of China’s sweeping claims in the strategic waterway on historical grounds.

“We do not wish to increase tensions with anyone, but we must let the world know that we are ready to protect what is ours,” Aquino said in his State of the Nation Address to Congress in 2011.

The Philippines largely won. China refused to join in the arbitration and dismissed as a sham the tribunal’s 2016 ruling, which invalidated Beijing’s claims to virtually the entire South China Sea based on a 1982 UN maritime treaty and continues to defy it. Aquino’s legal challenge and the eventual ruling plunged the relations between Beijing and Manila to an all-time low. 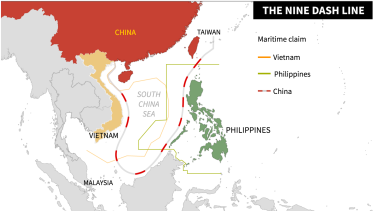 Born in 1960 as the third of five children, Aquino never married and had no children. An economics graduate, he engaged in businesses before entering politics.

During the politically tumultuous presidency of her mother, Aquino was wounded by gunfire during a failed 1987 coup attempt by rebel soldiers, who attempted to lay siege on the heavily guarded Malacanang presidential palace. Aquino was in a car with companions on the way back to the palace in Manila when they came under heavy gunfire. Three of his security escorts were killed and Aquino was severely wounded, with one bullet remaining embedded in his neck all his life because it was too dangerous to take out by surgery.

He won a seat in the powerful House of Representatives in 1998, where he served until 2007, then successfully ran for a Senate seat. Aquino announced his presidential campaign in September 2009 by saying he was answering the call of the people to continue his mother’s legacy. She had died just weeks earlier of colon cancer. 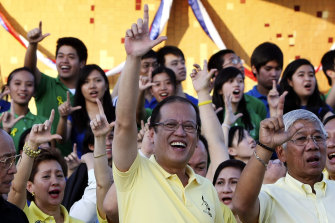 Benigno Aquino, centre, announced his presidential campaign in 2009 by saying he was answering the call of the people to continue his mother’s legacy. She had died just weeks earlier of colon cancer.Credit:AP

“I accept the responsibility of continuing our fight for the people. I accept the challenge to lead this fight,” he said.

He won by a large margin on a promise to fight corruption and poverty, but his victory was also seen as a protest vote due to exasperation with the corruption scandals that rocked the presidency of his predecessor, Gloria Macapagal Arroyo, who was detained for nearly five years and was released after the Supreme Court cleared her of the charges. Arroyo later successfully returned to political power, at one time serving as House speaker under Aquino’s successor, current President Rodrigo Duterte.

Public expectations of Aquino were high and while he moved against corruption — detaining Arroyo and three powerful senators over corruption allegations — and initiated anti-poverty programs, the problems in his disaster-prone Southeast Asian nation, which remained wracked by decades-old communist and Muslim insurgencies, remained daunting.

Under Aquino, the government expanded a program that provides cash dole-outs to the poorest of the poor in exchange for commitments by parents to ensure their children would attend classes and receive government health care. Big business, meanwhile, benefited from government partnership deals that allowed them to finance major infrastructure projects such as highways and airports for long-term gain.

One of the legacies of the Aquino presidency was the signing of a 2014 peace deal with the largest Muslim separatist rebel group in the country, the Moro Islamic Liberation Front, in 2014 that eased decades of sporadic fighting in the country’s south, homeland of minority Muslims in the largely Roman Catholic nation.

Political opponents have pounded on what they say were his administration’s bungling of a number of crises, including a Manila bus hostage crisis that ended with the shooting deaths of eight Chinese tourists from Hong Kong by a disgruntled police officer, and delays in recovery efforts in the massively disastrous aftermath of Typhoon Haiyan in 2013.

Aquino came under heavy criticism in 2015 for his absence in a solemn ceremony at a Manila airbase, where air force aircraft brought the remains of police commandos who had been killed by Muslim insurgents while staging a covert raid that killed one of Asia’s most-wanted terror suspects. Aquino proceeded with a scheduled inauguration of a car manufacturing plant and was criticised by his opponents for his lack of empathy amid a national mourning for the deaths of the anti-terror commandos.

Aquino retained high approval ratings when his single, six-year term ended in 2016. But the rise of the populist Duterte, whose deadly crackdown on illegal drugs has killed thousands of mostly petty drug suspects, was a reality check on the extent of public dissatisfaction and perceived failures during Aquino’s reformist rule.

Aquino campaigned against Duterte, warning he could be a looming dictator and could set back the democracy and economic momentum achieved in his own term.

After his presidency, Aquino stayed away from politics and the public eye. His former Public Works Secretary, Singson, told DZMM radio that Aquino told him in a cellphone message on June 3 that he was undergoing dialysis and was preparing for angioplasty, a delicate medical procedure to treat a blocked artery ahead of a possible kidney transplant.

Singson said he would pray for the ailing presidency and for a successful treatment. “That was the last time,” said Singson, a respected former member of Aquino’s Cabinet who, like the late president, had an image as an incorruptible official in an Asian nation long plagued by corruption scandals.

Aquino is survived by his four sisters.