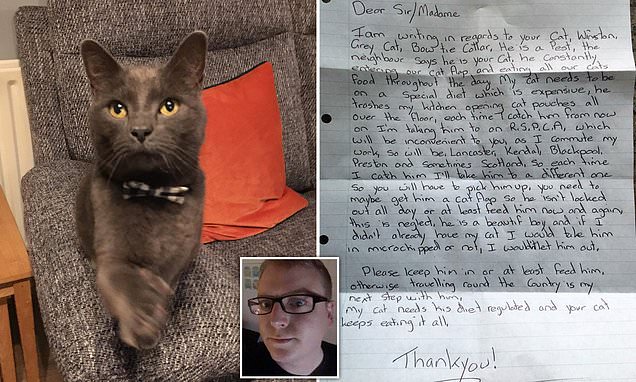 A pet owner was horrified after receiving a disturbing note which threatened to kidnap his cat because he is ‘constantly eating another moggie’s expensive food’.

Karl Hart, who lives in Walney, near Barrow-in-Furness, discovered the anonymous note on his doorstep.

It is claimed in the note that Karl’s grey moggie had been going through their cat flap constantly, trashing their kitchen and eating food from their cat’s pouches. 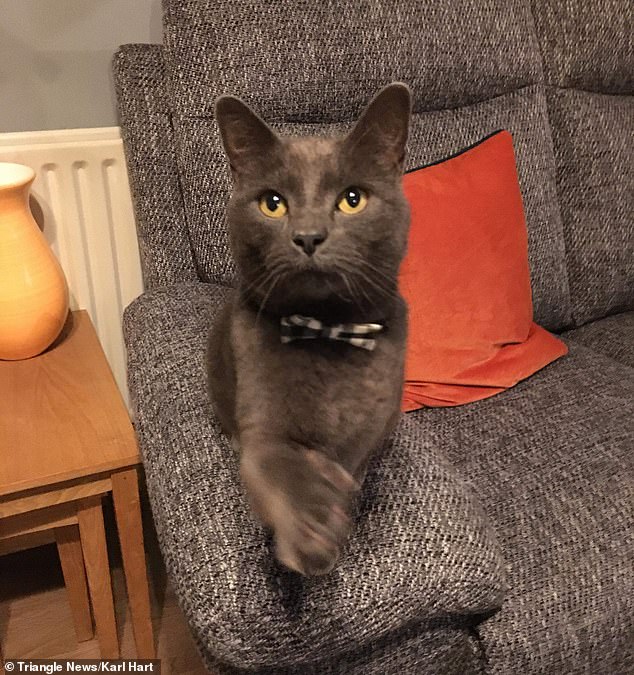 And the mystery writer also threatened to snatch Winston and drive him to a faraway RSPCA shelter so Mr Hart would have to go out of his way to collect him.

The note read: ‘I am writing regarding your cat Winston, a grey cat with a bow tie collar. He is a pest. The neighbour says he is your cat?

‘He is constantly through our cat flap and eating all our cat’s food throughout the day.

‘My cat needs to be on a special diet that is expensive, he trashes my kitchen opening cat pouches all over the floor.

‘Each time I catch him from now on I will take him to the RSPCA, which will be inconvenient for you as I commute to work, so will be Lancaster, Kendal, Blackpool, Preston and sometimes Scotland.

‘So each time I catch him I will take him to a different one so you will have to pick him up.

‘You need to maybe get him a cat flap so he isn’t locked out all day or at least feed him now and again. This is neglect. He is a beautiful boy and if I didn’t already have my cat I would take him in microchipped or not and I wouldn’t let him out.

‘Please keep him in or at least feed him otherwise travelling around the country with him is my next step with him.

‘My cat needs his diet regulating and your cat keeps eating it all. Thank you.’ 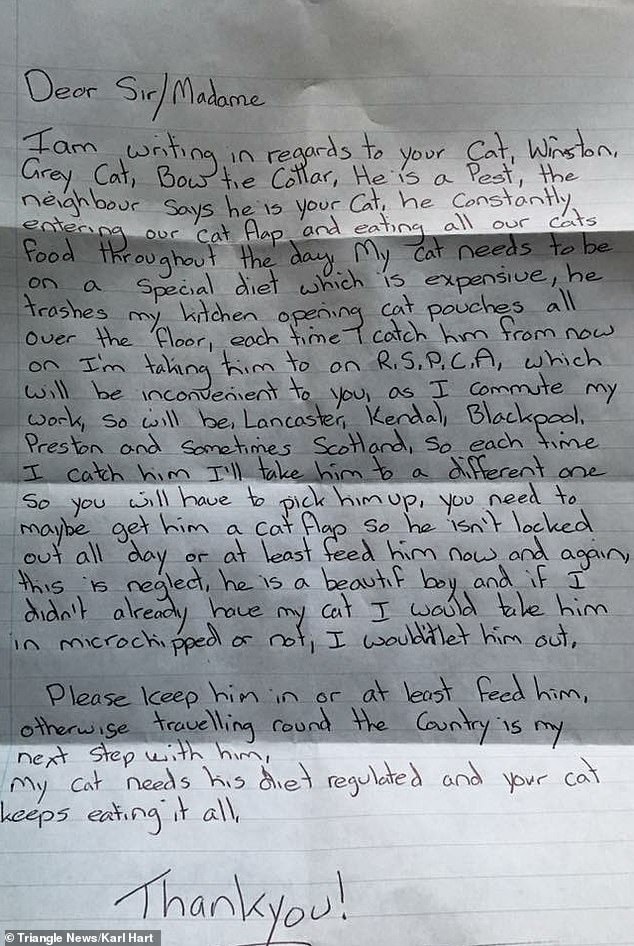 It is claimed in the  note that Karl’s grey moggie had been going through their cat flap constantly, trashes their kitchen and eating food from the pouches

Mr Hart wrote an open letter back to the aggrieved pet owner, in which he tried to reason with them.

He wrote on Facebook: ‘To the anonymous lady threatening to abduct my cat.

‘Firstly; let me assure you that I do appreciate your frustration with Winston coming into your house and eating your cat’s food.

‘I too find other cats entering my house through the cat flap that is present and eating the food that is here.

‘I however see it as an acceptable hazard of allowing my cat to come and go as he pleases.

‘Secondly; please be assured that as I do not follow Winston on his adventures, and he doesn’t report back to me on them, the letter you posted through my door was the first I’ve heard of him freeloading off you.

‘In all seriousness, in order to prevent what appears to be your objective of making my life hard by travelling around the country to retrieve my cat (in no way stopping him helping himself to your cats food once he’s home and exploring again) I would like to offer to buy you a new cat flap that only your cat can access.

‘Please get in touch with me to organise a rational solution to this issue.

‘Also, if you happen to be friends with the lady please pass this message along.’ 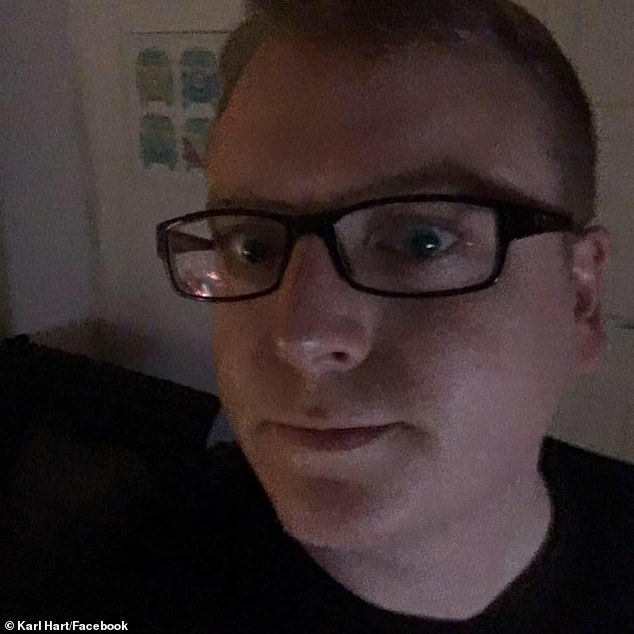 Mr Hart, who lives in Walney, near Barrow-in-Furness, wrote an open letter back to the aggrieved pet owner, in which he tried to reason with the note writer

Those who saw Karl’s letter were astonished that someone would drive a neighbour’s cat to a shelter.

Shazz Tucker said: ‘Why didn’t she just knock on your door?’

Victoria Thompson said: ‘This is the funniest sh*t I’ve ever read. She’s going to the RSPCA in Scotland?? What a numpty!!’

John Burgess added: ‘Sounds like a bit of a cat-astrophe to me.’

Paula Merchant said: ‘Haha Winston how could you, what a naughty boy.’

Dawn Green said: ‘Think she needs to take herself to the RSPCA.’

Janine Lewney said: ‘I love seeing Winston every day and him coming for a tin of tuna. He didn’t come in my catflap he came in the window.

‘He/she needs to have a chill pill, you can’t chain a cat to the floor.’

Rose SMith said: ‘Wow! My large boy goes to all our neighbours…he is a proper chancer.

‘He tucked into a roast chicken one neighbour had left on her counter*.I nearly died of embarrassment. I make him buy them presents at Christmas.’

Lucy Carrasco added: ‘If WInston is coming in and partying hard in your house then I would suggest the problem is not him.

‘Winston is doing what is in his nature.

‘Taking a cat to a charity that is already stretched and depends on public contributions when the owner lives across the street is malicious, selfish and quite pathetic.

‘Top marks to Winston. I hope he pees on their sofa too.’