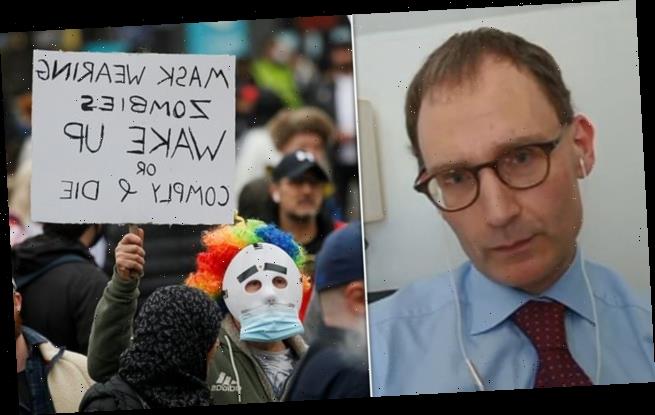 People may wear masks and keep distance 'even after rules scrapped'

Wearing face masks could become the norm in the UK even when Covid restrictions are scrapped, one of No10’s top scientific advisers said today.

‘Professor Lockdown’ Neil Ferguson, the epidemiologist whose grim modelling led to the first blanket shutdown last spring, said the pandemic may have caused a ‘cultural change’.

It is already routine in Southeast Asia for people to wear masks in public spaces if they have a cold or are feeling poorly.

And Professor Ferguson said it was ‘quite possible’ mask-wearing would become the ‘norm’ in the UK.

Quizzed about the topic, he said: ‘We have got used to being careful, particularly if we’re slightly ill ourselves, about not wanting to infect other people, and so those sort of things may well happen here.’

Professor Ferguson, of Imperial College London, claimed laws on wearing coverings are likely to be relaxed by the end of the year. Face masks were made mandatory on public transport in June last year and in indoor public spaces the following month.

Boris Johnson’s road map out of lockdown says ‘all legal limits on social contact’ will be lifted no earlier than June 21 this year. But the Prime Minister’s blueprint makes no specific mention of when face mask rules will be dropped. 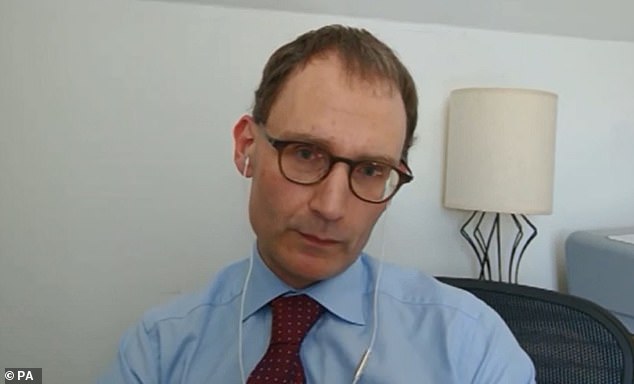 Professor Neil Ferguson, an epidemiologist at Imperial College London and SAGE adviser, has suggested people could wear face masks forever because of permanent changes to their behaviour during the coronavirus pandemic

But experts have previously suggested face coverings could be required for years to come, despite heated debates over whether they actually slow the spread of the virus.

Mary Ramsay, head of immunisation at Public Health England, suggested this weekend that people may need to wear face coverings and continue social distancing for several years until life gets back to normal.

The UK’s chief scientific adviser Sir Patrick Vallance last month said rules around mask-wearing are expected until the end of the year at least.

And Professor Graham Medley, a SAGE adviser and infectious disease expert at London School of Hygiene and Tropical Medicine, told MailOnline coverings may still be used years from now out of habit, if not law.

Asked about the prospect, Professor Ferguson told BBC Breakfast: ‘I suspect, later this year, the mandates, the legal requirements to do some of those things will have gone.

‘I think there’s an interesting question as to whether people’s behaviour changes as quickly.

‘People have got used to being very cautious around each other, used to wearing masks.

‘I can’t predict how quickly that will change or whether we’ve actually seen a permanent change in society, to some degree. 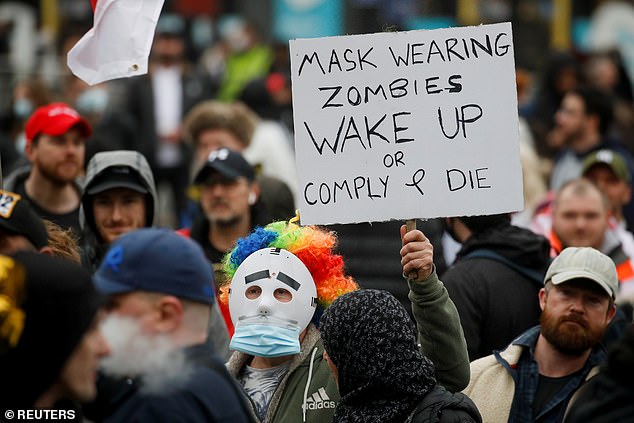 Pictured: An anti-lockdown protester holds a sign reading ‘mask wearing zombies wake up or comply and die’ during demonstrations in Manchester on Saturday

‘I think it’s quite possible that this pandemic, which has been an immensely traumatic event for this country and for the world, will cause significant long-term cultural changes, behavioural changes in the population.’

Professor Ferguson said he believes the UK’s reopening road map is still on track despite concerns over a third wave of Covid-19 in Europe.

He said the surge in Europe has ‘already happened to us and we’re through to the other side, but the real concern is things like the South African variant, where the vaccination programme we’re currently using, whilst it would still give some protection against that (variant), the protection would be reduced.’

The UK has ‘rolled out vaccination very fast and so we are in a very different position from most European countries’, he added.

‘We have vaccinated more than twice the proportion of the population than any other European country has done, so we’re in a better place from that point of view.

‘I don’t think, just because cases are rising in Europe, that necessarily throws our timetable into doubt; what it may do is affect planning around restrictions on international travel, how much we try and screen people coming into the country.’

On keeping to the road map, he said the UK has a ‘very good chance of both being able to relax measures and not needing to tighten up’.

However, he said, depending what happens in other countries, ‘travel may be one of the later things to be relaxed’.

‘But I think we… whilst not everything will be back to normal by the summer, certainly by the autumn, it will feel a lot more normal.’

Regarding booster jabs in the autumn, Professor Ferguson said these would be ‘critical’.

He said: ‘We don’t yet know how long the immunity lasts from the vaccines we’re giving, but natural immunity to coronavirus probably lasts a year or so, so it’s entirely likely we will need to boost immunity.

‘We can’t stop things like the Brazilian and the South African variants forever and they are different immunologically.

‘The current vaccines are not as effective against those strains probably, so for that reason as well we want to update vaccines and boost people’s immunity.’

WHAT HAVE STUDIES SHOWN ABOUT FACE MASKS AND COVID?

Research on how well various types of masks and face coverings protect against coronavirus has varied but experts and politicians have generally leaned towards the idea that the chance of some protection is better than none.

In the UK, face coverings were first made mandatory in for public transport in June and later for shops and other indoor spaces in July.

Here’s what studies have shown so far about whether masks work:

Researchers at Boston University in the US found wearing face masks is an effective way to stop the spread of the coronavirus.

The study, published in the journal Lancet Digital Health, found a 10 per cent rise in self-reported mask wearing is associated with a three-fold increase in the odds of keeping the R number – the number of others each person with coronavirus infects – below 1.

Co-author of the study Ben Rader, of Boston Children’s Hospital and Boston University, said: ‘An important finding of this research is that mask wearing is not a replacement for physical distancing.’

Scientists at New Mexico State University in the US found wearing a cloth mask may not shield the user totally from coronavirus because infected droplets can slip through, but it would significantly reduce how many.

‘Wearing a mask will offer substantial, but not complete, protection to a susceptible person,’ said Dr Krishna Kota, an associate professor at the university who led the research.

The study found while all masks blocked at least 95 per cent of droplets from coughs and sneezes – there was still a risk of the disease being passed on.

A MASK ‘WILL ALWAYS BE BETTER THAN NOTHING’ (DECEMBER 2020)

Research by the University of Massachusetts Lowell and California Baptist University in the US found wearing a used three-layer surgical mask can reduce the number of small droplets that are released into the air by two thirds.

Co-author Dr Jinxiang Xi said: ‘It is natural to think that wearing a mask, no matter new or old, should always be better than nothing.

‘Our results show that this belief is only true for particles larger than five micrometers, but not for fine particles smaller than 2.5 micrometers.’

A study by Copenhagen University Hospital in Denmark suggested face masks may only offer the wearer limited protection against Covid infection.

Researchers found there was no statistically significant difference in the number of people who contacted the virus in a group wearing masks in public compared to a group that did not do so.

The study was carried out in April and May when Danish authorities did not recommend wearing face coverings.

Research by Edinburgh University in Scotland suggested cloth face masks are effective at reducing the amount of droplets spread by coughing or sneezing.

The findings suggest a person standing two metres from someone coughing without a mask is exposed to 10,000 times more droplets than from someone standing half a metre away wearing a basic single layer mask.

Professor Paul Digard, of the University of Edinburgh’s Roslin Institute, said: ‘The simple message from our research is that face masks work.

‘Wearing a face covering will reduce the probability that someone unknowingly infected with the virus will pass it on.’

A study by Duke University in North Carolina, US, found N95 masks are the most effective masks at reducing the spread of Covid-19.

The research published in the journal Science Advances, studied 14 types of face coverings.

Co-author Dr Eric Westman said: ‘If everyone wore a mask, we could stop up to 99 percent of these droplets before they reach someone else.

‘In the absence of a vaccine or antiviral medicine, it’s the one proven way to protect others as well as yourself.’

A University of Oxford study published on March 30 last year concluded that surgical face masks are just as effective at preventing respiratory infections as N95 respirators for doctors, nurses and other health care workers.

N95 respirators are made of thick, tightly woven and moulded material that fits tightly over the face and can stop 95 percent of all airborne particles, while surgical masks are thinner, fit more loosely, and more porous.

The Oxford analysis of past studies – which has not yet been peer reviewed – found that surgical masks were worth wearing but any face mask is only as good as other health and hygiene practices.