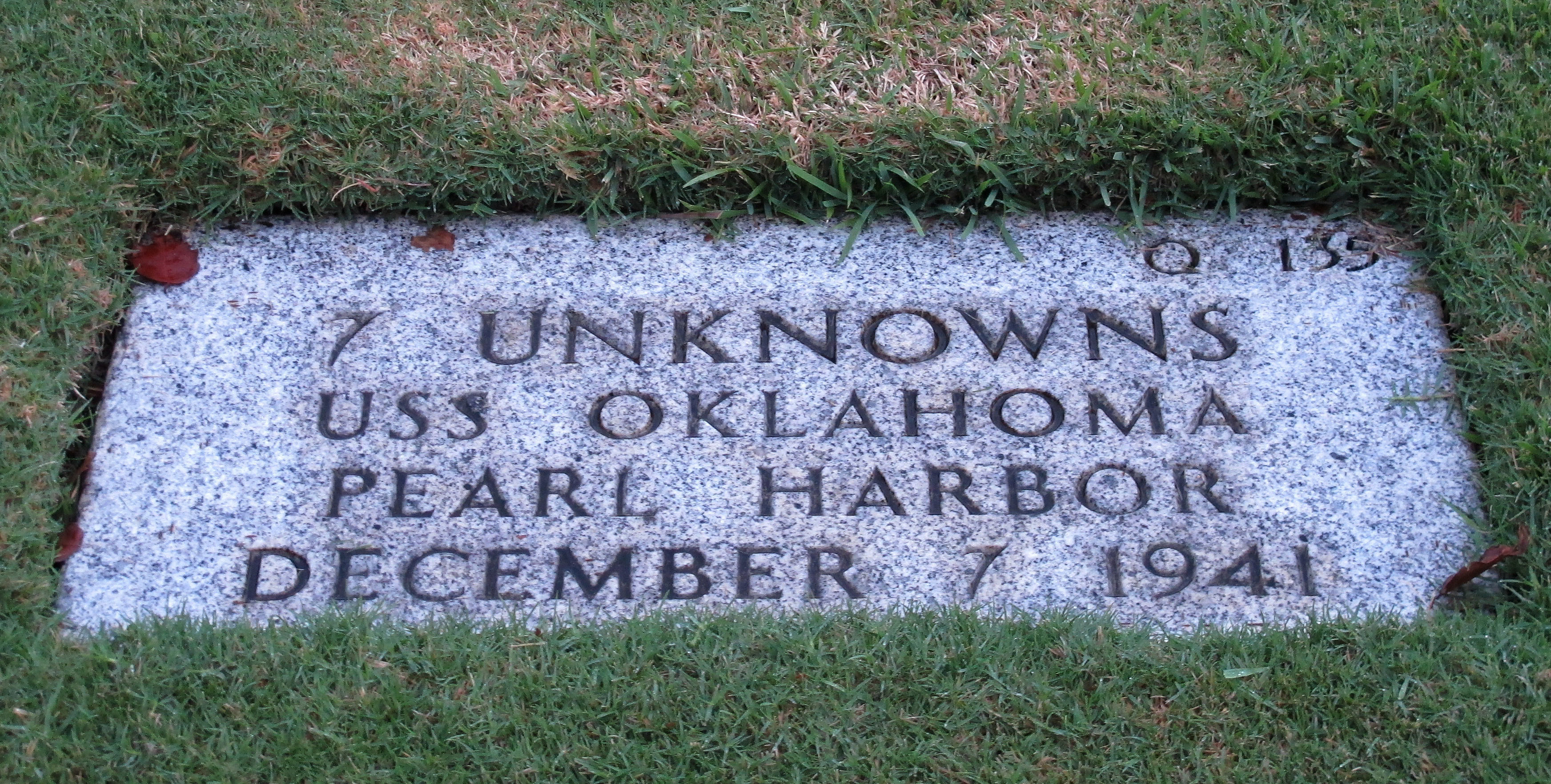 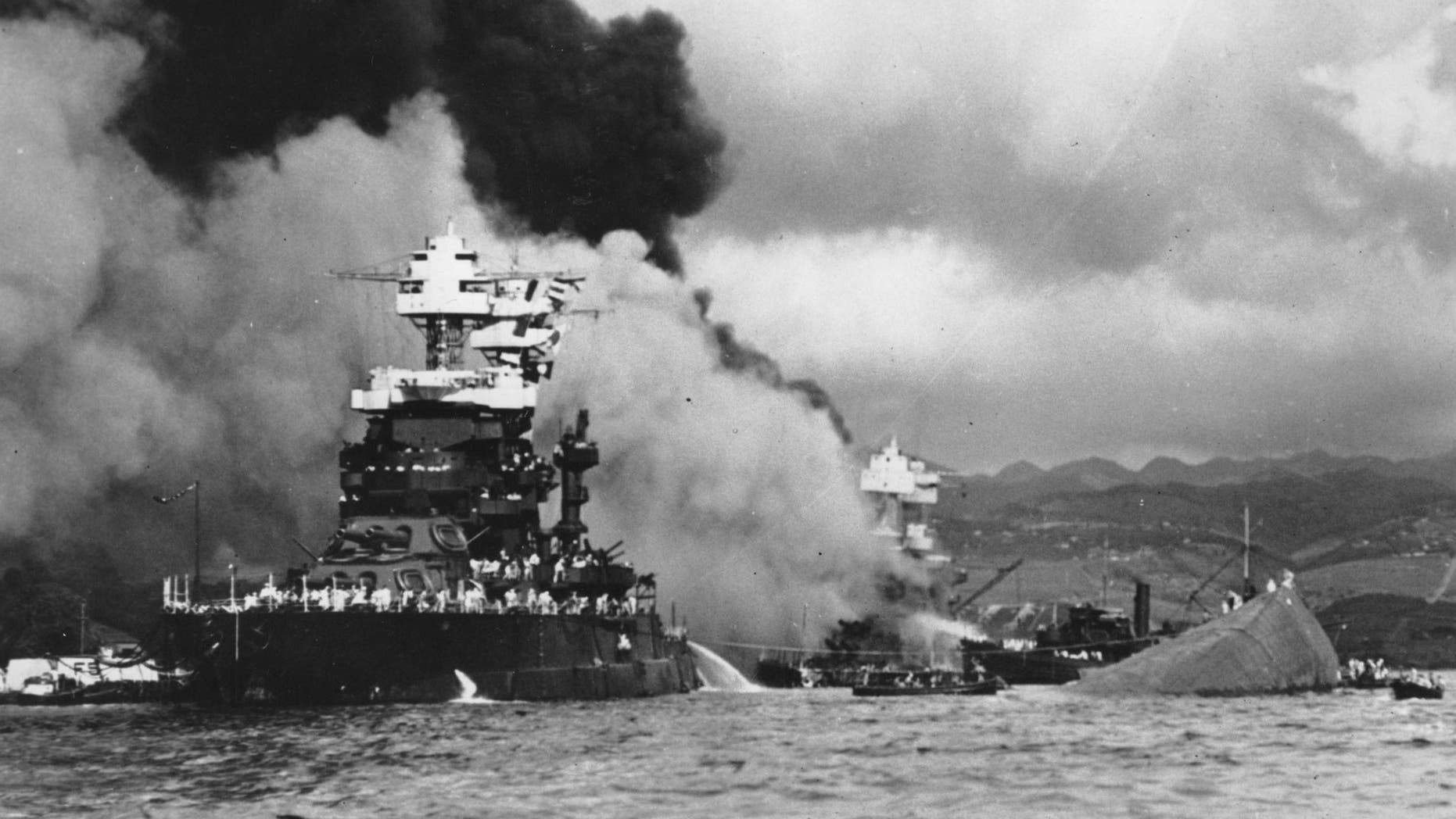 In this Dec. 7, 1941 file photo, part of the hull of the capsized USS Oklahoma is seen at right as the battleship USS West Virginia, center, begins to sink after suffering heavy damage, while the USS Maryland, left, is still afloat in Pearl Harbor, Oahu, Hawaii.
(U.S. Navy via AP, File)

After nearly eight decades, the lost victims of the infamous Pearl Harbor attack during World War II will finally be laid to rest this week thanks to DNA testing.

Nearly 2,400 members of the U.S. military were killed in the Japanese attack at Pearl Harbor, out of those 429 sailors and Marines were killed on the USS Oklahoma, which was capsized after it was struck by several torpedoes during the attack on December 7th, 1941. Only 35 were identified in the years immediately after the attack. The rest of the remains were exhumed when the ship was raised in 1942 and found to be unidentifiable. They were then buried in graves marked as unknown at the National Memorial Cemetery of the Pacific in Hawaii.

In 2015, the Defense POW/MIA Accounting Agency started exhuming nearly 400 sets of the remains after determining advances in forensic science and genealogical help from families could make identifications possible. As of earlier this month, the agency has identified 186 sailors and Marines from the Oklahoma who were previously unidentified. 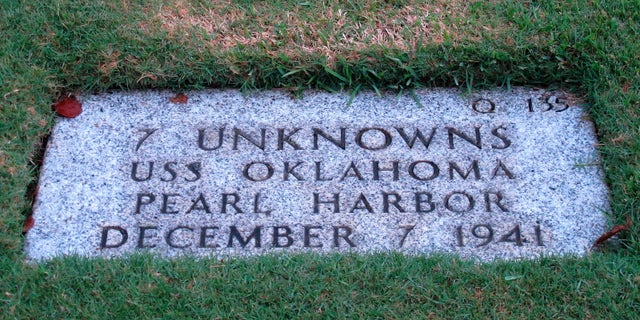 The National Memorial Cemetery of the Pacific in Honolulu displays a gravestone identifying it as the resting place of seven unknown people from the USS Oklahoma who died in Japanese bombing of Pearl Harbor.
(AP Photo/Audrey McAvoy, File)

Slowly, the remains are being sent to be reburied in places like Traer, Iowa, Ontonagon, Michigan, Omaha, Nebraska and Arlington Cemetery. Many were buried on Friday during the anniversary of the attack with other to be laid to rest throughout the weekend. Among those to be buried include:

WILLIAM BRUESEWITZ
Bruesewitz, of Appleton, Wisconsin, is to be buried in Arlington National Cemetery with nearly 50 family members from Wisconsin, Florida, Arkansas and Maryland will attend.

"It's a real blessing to have him returning and we've chosen Arlington because we feel he's a hero and belongs there," Bruesewitz’s niece Renate Starck said to the AP.

"We were too young to know him but we're old enough that we felt his loss," she added. "We know some stories. There's this stoicness about things from that time that kept people from talking about things that hurt."

BERT MCKEEMAN
The former Navy Fireman 1st class, whose remains were exhumed nearly six years ago for DNA testing, will be laid to rest in his hometown of Council Bluffs, Iowa on Saturday.

“[J]ust a young man waiting to start a life,” she said. “He was a very handsome man. To us, he’s our hero,” McKeeman’s niece, Kathy Rollin, 71, said to Omaha World-Herald.
“This finally puts things to rest,” her brother, Bill McKeeman, 56, said to the newspaper. 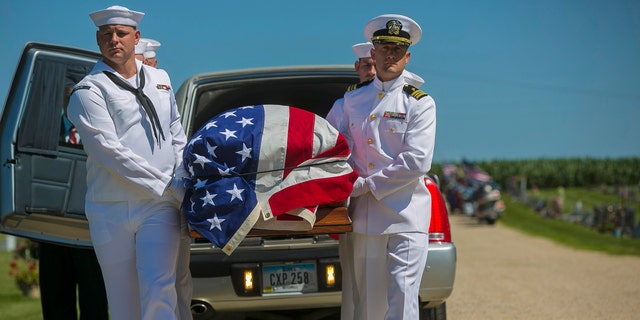 FILE – In this July 7, 2018 file photo, U.S. Navy sailors remove the casket with the remains of Seaman First Class Leon Arickx from a hearse at Sacred Heart Cemetery in Osage, Iowa. Arickx’ remains, which were unidentifiable after his death after the Japanese attack at Pearl Harbor in 1941, were identified through DNA testing earlier this year. (Chris Zoeller/Globe-Gazette via AP, File)

His burial in his home state was originally planned for a weekend when it would be more convenient for people to attend. But because of scheduling conflicts at the North Mississippi Veterans Memorial Cemetery, his family decided the 77th anniversary of the attack would be an appropriate date, even if some people have to take time off, said his nephew, Dr. Lawrence Wade.
He was one of the sailor's relatives who provided DNA to help identify him.

"My middle name is his name, Durell. My grandson has that name also," said the 75-year-old retired psychiatrist from Baton Rouge, Louisiana. "I'd gone through my life not really knowing anything about him, other than I carried his name and he was killed at Pearl Harbor. Once this DNA process came along and made it possible to identify his remains, it just made him much more of a real person to me."

Dorr’s remains were finally brought back to the Mainland on Wednesday in Atlanta, where family members and Veterans gave plane-side honors. Members of his family told a local news station from their native South Carolina that they had waited decades for Dorr’s return.

“He was missing in action,” nephew Charles Dorr Howard said to WCSC-TV. “That’s all they knew for years. My grandfather spent a good half of his life trying to find out what happened to his son. It’s up to us as the last Dorr family to receive Carl back and have him buried as close to his parents as we possibly could.”

The Associated Press contributed reporting to this story.