Pamela Anderson is giving fans a look inside her world. On Tuesday, Netflix dropped the first trailer for the 55-year-old actress' highly anticipated documentary, Pamela, a Love Story.

The 2-minute clip begins with a slowed version of The Cardigans' hit song, “Lovefool," and dives right into Anderson talking about blocking out the events following the stolen sex tape she made with her then-husband, Tommy Lee, and the time that followed.

"I blocked that stolen tape out of my life in order to survive," Anderson says, adding, "And now that it's all coming up again, I feel sick."

Anderson soon makes it clear that her mission for the documentary is to tell her own story.

"I want to take control of the narrative for the first time," she says. "I didn’t feel like I had a lot of respect. I had to make a career out of the pieces left, but I'm not the damsel in distress. I put myself in crazy situations and survived them."

The final minute of the trailer is filled with images of Anderson at the height of her career on Baywatch, as well as interview clips from the '90s, and her gracing the stage during her time in the Broadway musical, Chicago, last year.

In a more intimate look, Anderson is seen journaling at home and sharing sweet moments with her sons, Brandon and Dylan.

The trailer ends with optimism, as "Lovefool" plays at regular speed and Anderson talks about the joys of having the chance to speak up for herself.

"Why can’t we be the heroes of our own life story?" she asks. Anderson even jokes about stripping down for the occasion.

"Maybe I just do all the interviews naked," she quips. "There’s no mystery here." 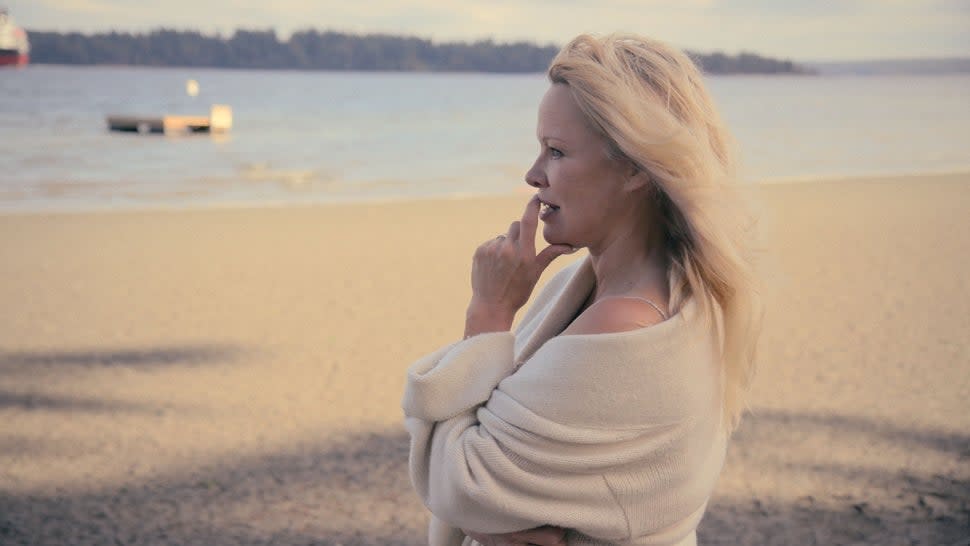 Pamela, a Love Story debuts on Jan. 31 on Netflix, and is produced by Jessica Hargrave (Ask Dr. Ruth, The Keepers), Julia Nottingham (Kingdom of Us) and Anderson's oldest son, 26-year-old Brandon.

The doc promises to be an "intimate and humanizing portrait of one of the world’s most famous blonde bombshells," and will follow the trajectory of Anderson's "life and career from small town girl to international sex symbol, actress, activist and doting mother."

Following the documentary's initial announcement in March, Anderson spoke to ET about the people who influenced her to speak candidly about her life.

"My kids really wanted me to do this," Anderson said of the documentary. "I just finished writing my memoir and that'll be out in eight months or so, and now the Netflix documentary is following me around."

In addition to her doc, Anderson's memoir, Love, Pamela, will also be released on Jan. 31.

Pamela Anderson on Sons' Influence on Doc and Her Broadway Debut