A “monster monsoon” season has wreaked havoc in Pakistan, as catastrophic flooding overtakes homes and land and has already left more than 1,000 people dead. New satellite images show the extent of the destruction – including a massive lake that has taken the place of part of the Indus River.

The worst flooding to hit Pakistan in a decade began plaguing the country in mid-June. As of Wednesday, nearly 1,200 people have been killed, including nearly 400 children, according to the National Disaster Management Authority. More than 3,600 others have been injured. More than 1.1 million homes and 3,100 miles of roads have been damaged.

Foreign Minister Bilawal Bhutto-Zardari said this week that at least 30 million people – more people than live in Texas, according to census data – out of Pakistan’s 220 million have been impacted by the flooding.

The areas that sit along the Indus River have suffered from the worst flooding, according to NASA’s Earth Observatory. Between Aug. 1 and Aug. 26, one of the provinces the river runs through, Sindh, received 443 millimeters (more than a foot and a half) of rain – more than 780% higher than the average.

Satellite images of the area, taken by NASA’s Landsat 8 and Landsat 9 satellites, show just how much the floodwaters expanded between Aug. 4 and Aug. 28.

The satellite photos show that the Indus River and Hamal Lake, once roughly 30 miles apart, have now been joined together as a massive lake.

NASA’s Moderate Resolution Imaging Spectroradiometer captured similar images, but showcased the difference in the region compared with last year. On Aug. 28, 2021, the Indus River veered northeast from the South’s Hamal Lake, with significant land areas separating it from bodies of water to the west and little to no flow between them. On Aug. 28 this year, however, the image shows the two conjoined to form a lake more than 100 kilometers (62 miles) wide. 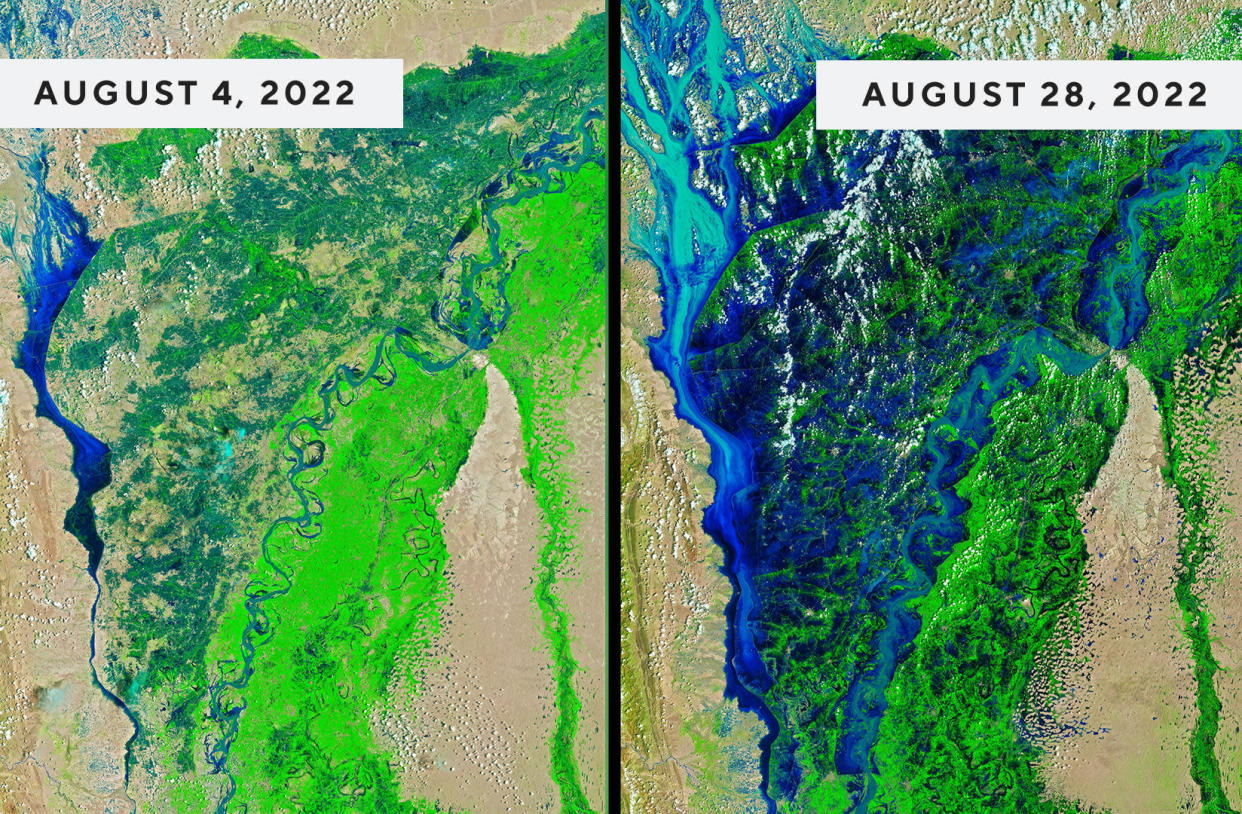 The dark blue hues in the image indicate water, with the darkest color indicating the deepest water. Vegetation appears bright green and open spaces with little vegetation are tan.

“These images clearly show the difference between the more normal monsoon season of 2021, when the flood plains near the Indus were green and the river remained within its banks, and the catastrophic and deadly inundation of the 2022 monsoon,” NASA said of the image.

Other satellite images from Planet Labs PBC show the extent of the floods in other regions. The Kabul River near the town of Charsadda in Pakistan’s northern province of Khyber Pakhtunkhwa saw significant overflow. Images show the water pouring out of the river and overtaking homes and large swaths of land. 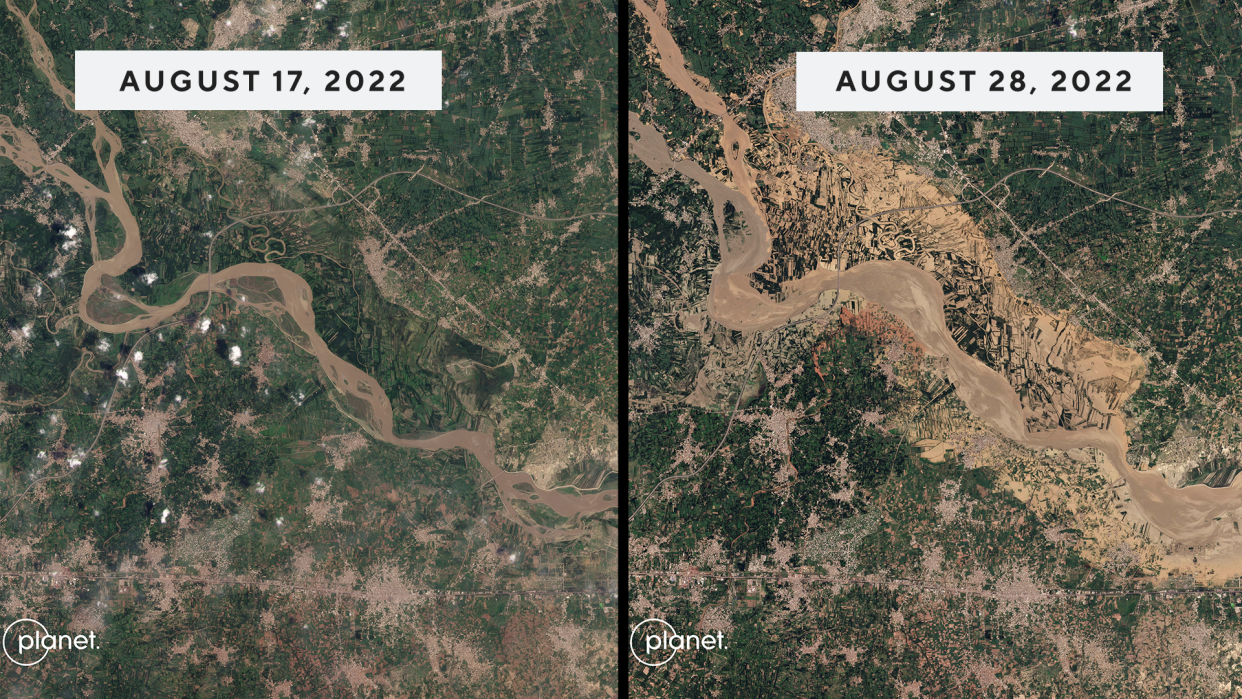 And the risk of further devastation is ongoing: Monsoon season lasts until the end of September.

The last time Pakistan saw severe flooding of this nature was in 2010, according to NASA. And as the country continues to face the ramifications of the situation, U.N. Secretary-General Antonio Gutteres said this week that what they are facing should serve as a warning to the rest of the world to better its actions to reduce the impacts of climate change.

The United Nations has repeatedly warned that heavy precipitation events like monsoons will only grow more intense as the planet warms and overwhelm cities throughout the world. In April, hundreds of people were killed and more than 40,000 were displaced in South Africa because of catastrophic flooding. Human-caused climate change is what made that kind of devastation all the more likely.

“Let’s stop sleepwalking toward the destruction of our planet by climate change,” Gutteres said in a video message this week. “Today, it’s Pakistan. Tomorrow, it could be your country.”

Grandmother and grandson one trip away from visiting all 63 U.S. National Parks together