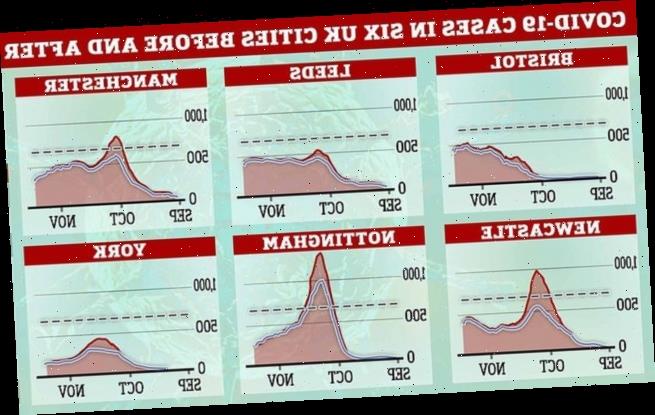 Around 12 per cent of Covid-19 cases were recorded in the wrong location due to a Test and Trace blunder which mistakenly listed students’ positive tests at their parental homes, it emerged today.

The error, which spanned the six weeks before Britain was plunged under a three-tier lockdown system, left several university cities unaware of the scale of the pandemic in their area, the Telegraph reported.

Students were erroneously reported to live in their home towns when they tested positive for the virus rather than being away at university.

Updated figures now show student hubs Newcastle, Nottingham and Manchester all had a higher case rate than Liverpool when it was placed under Tier 3 restrictions last month.

In Newcastle, between October 5 and 11, it was initially believed there had been 1,416 confirmed cases of coronavirus. This number has now jumped by 48 per cent to 2,104. 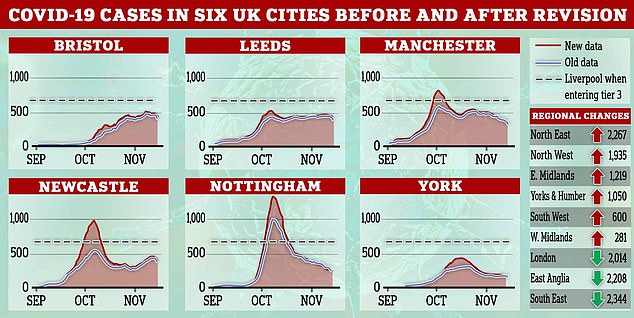 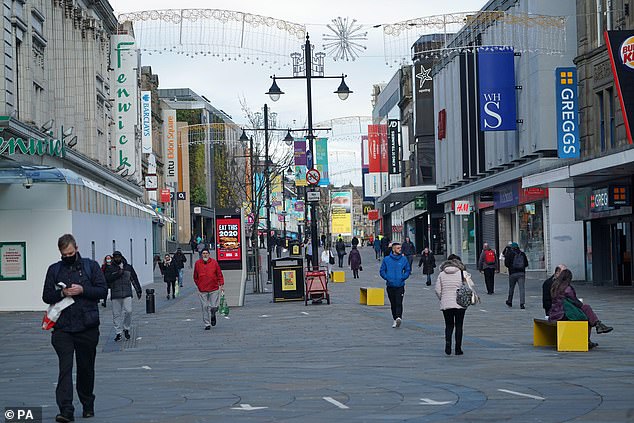 Updated figures now show student hubs Newcastle (pictured), Nottingham and Manchester all had a higher case rate than Liverpool when it was placed under Tier 3 restrictions last month

The blunder, which has since been corrected by Public Health England, was a consequence of test results being automatically linked to a student’s medical records.

These would then often connect the case to a parent’s address by default, regardless of whether a term-time address was given.

Following the address reallocation on Monday, areas such as Richmondshire in North Yorkshire saw 12 per cent of its total recorded cases disappear from its tally.

Around 30 further local authorities saw a fall in total Covid-19 cases of more than five per cent.

Regionally, the North West saw an increase of 1,935 cases following the correction while cases in East Anglia fell by 2,208. The South East saw the largest reduction, with 2,344 overall cases removed from its tally,

Dr Yvonne Doyle, medical director at PHE, told the Telegraph: ‘We have updated the way we record the location of people who test positive for coronavirus to prioritise addresses given at point of testing, rather than details registered on the NHS database. 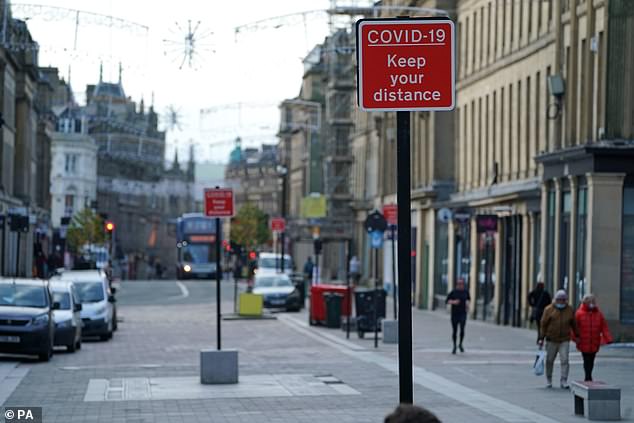 Students were erroneously reported to live in their home towns when they tested positive for the virus rather than being away at university. Pictured: Newcastle earlier this month 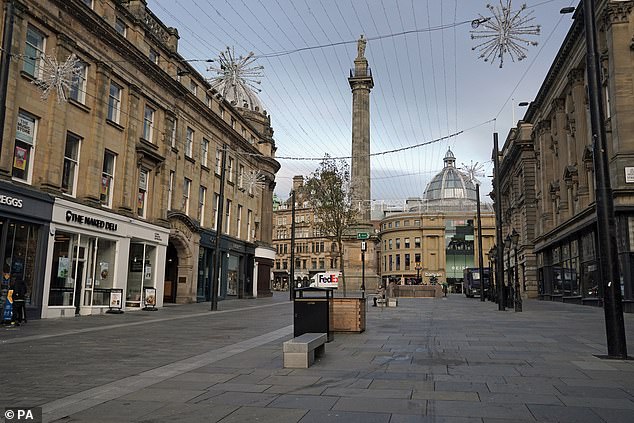 The blunder, which has since been corrected by Public Health England, was a consequence of test results being linked to a student’s GP records, which often automatically connected the case to a parent’s address

‘This better reflects the distribution of positive cases in recent weeks and months, particularly among younger people of university age who may not have yet registered with a GP at their term-time address.

‘This has not affected any decision about local and national restrictions, which take into account a wider range of evidence.’

PHE added it had considered whether the corrected data would have impacted decisions made about local and national restrictions earlier in the year.

It was concluded that ‘recording location based on the NHS database has not affected any such decisions which take into account a wider range of evidence.’

News of the blunder came as Britain recorded 1.7 per cent fewer coronavirus cases compared to last week in yet another indication the UK’s second wave is slowing.

The Government announced 20,051 new lab-confirmed Covid cases in the UK yesterday, down from the 20,412 infections confirmed last Tuesday.

The figure is also a fall from the 21,363 cases confirmed on Monday, with the total number of infections in the UK now at 1,410,732 since the start of the pandemic.

The Department of Health announced a further 598 people had died within 28 days of testing positive for Covid-19 as of Tuesday – up 12.4 per cent from the same point last week, when 532 deaths were recorded. 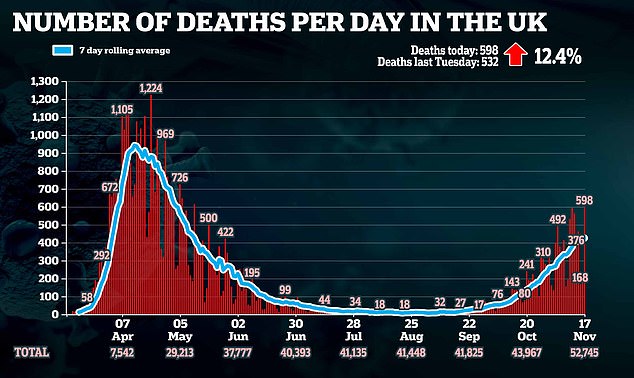 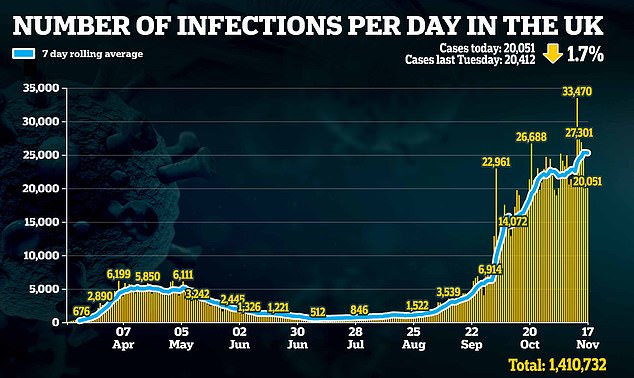 How could the new Tiers look?

Ministers insist no final decisions have been made on the Tier system after December 2, but there have been hints at the kind of measures it could feature.

It also seems clear that in future the rules will be applied on a wider regional basis, rather than to specific towns and cities.

The Rule of Six looks set to continue, and the 10pm curfew on pubs and restaurants would still apply.

However, there is speculation that households could be restricted from meeting in homes after health chiefs said the base level was proving ineffective.

Tier 2 previously involved all the curbs in the first level, plus a ban on mixing with other households in any indoor setting – including pubs and restaurants.

There is a ban on socialising indoors and in private gardens. Pubs and bars must shut unless they are able to operate as eateries.

There are restrictions on staying overnight in other parts of the country unless it is for essential work.

Ministers have been hinting at another bracket of restrictions above the existing highest level – as is already the case in Scotland.

There are suggestions it could ’embed’ some of the bolt-ons to the Tier 3 restrictions already being deployed in some areas.

For example, Nottinghamshire has imposed a ban on alcohol sales after 9pm, while other areas have shut gyms and leisure centres.

However, separate data from the UK’s statistic agencies suggest there have been more than 68,000 deaths involving Covid-19 in the UK.

These include deaths where the virus has been mentioned on the death certificate, together with additional data on deaths that have occurred in recent days.

Meanwhile, figures released by the Office for National Statistics today showed the number of people dying with Covid-19 rose by 40 per cent in the first week of November – when the virus was to blame for one in every six deaths in England and Wales.

The latest data comes amid fears that England could be headed for Christmas under a brutal four-Tier system when lockdown ends next month – with the prospect of tougher limits on mixing indoors and alcohol sales.

Housing Secretary Robert Jenrick today delivered a strong hint that the levels of local restrictions will be bolstered even if the national curbs are lifted as scheduled on December 2.

Mr Jenrick has suggested some extra measures taken in Nottinghamshire – such as a bar on alcohol sales after 9pm – could be ’embedded’ into any upcoming Covid-19 arrangements.

The Housing Secretary added no decision had been taken on whether to tighten the lowest Tier One after health chiefs branded it ineffective. This could potentially mean families being prevented from gathering indoors over the festive season.

Pressed on the issue in the Commons this afternoon, Health Secretary Matt Hancock refused to kill off the idea, saying it was ‘too early to do the analysis’. ‘We will remain vigilant,’ he told MPs.

In a round of interviews, Mr Jenrick also signalled regions, rather than individual towns and cities, will be subject to the same Tiers to make them more ‘consistent’.

He added there will not be any ‘definitive’ decision on the shape of the rules post-December 2 until the end of this month.

Mr Jenrick even refused to confirm that the blanket lockdown will end on that date, merely saying the ‘hope and expectation’ was that it would.

CategoryWorld News
Tagscases COVID-19 eight in One We