Home » World News » On record day for COVID-19 deaths, Trump falsely says at packed party he will ‘win this election’ 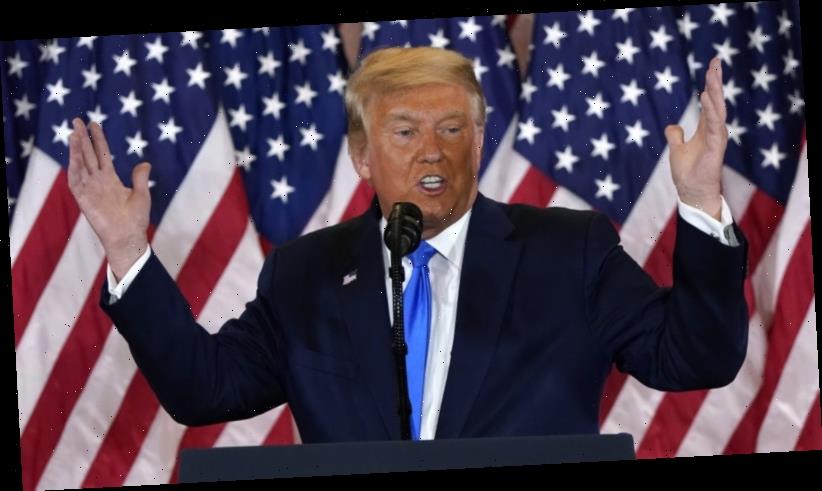 On record day for COVID-19 deaths, Trump falsely says at packed party he will ‘win this election’

At the end of the United States' deadliest day so far during the coronavirus pandemic, President Donald Trump emerged at an indoor Hanukkah party to speak with a crowd mostly wearing masks but not adhering to social distancing in the East Room at the White House.

Then, the President falsely said again that he won the election, boasting that a "miracle" was coming in the form of long-shot legal efforts that have been repeatedly defeated in multiple states. 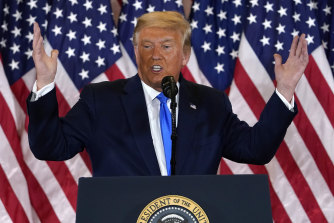 President Donald Trump has declined to address the dramatically worsening pandemic in the US.Credit:AP

"All I ask for is people with wisdom and with courage, that's all," Trump told the crowd on Wednesday night, according to a video of the event shared by Jewish Insider's Jacob Kornbluh, "because if certain very important people, if they have wisdom and if they have courage, we're going to win this election in a landslide."

The crowd responded by breaking into a chant of, "Four more years!"

The moment highlighted a consistent theme of Trump's actions in the last month, as he's declined to address a dramatically worsening pandemic while focusing instead on his thus-far failed efforts to overturn the election results.

Wednesday's White House holiday party came on the same day that 3140 people died of COVID-19 in the US, a record for deaths, according to a Washington Post analysis. Nationwide, 106,000 people were hospitalised with COVID-19, another record.

The Hanukkah party was among at least 25 indoor parties planned in a packed holiday season at the White House, which ignored warnings from the Trump administration's own public health experts to avoid large groups and limit travel.

More than 100 guests attended each of the two Hanukkah parties held on Wednesday, according to The Times of Israel. White House chief of staff Mark Meadows, who recovered from the coronavirus last month, was shown not wearing a mask and shaking hands in multiple photos taken with maskless partygoers.

White House officials said they were taking safety precautions for the events, but would still allow more than 50 guests at each of the parties, reported The Post's Josh Dawsey and Yasmeen Abutaleb. Other administration gatherings included a State Department party at the presidential guesthouse featuring roughly 200 guests earlier this week.

Trump defended the White House holding holiday parties during a pandemic this week, saying many of the guests have worn masks "and I think that's a good thing".

A request for comment to the first lady's office, which has overseen the party planning, was not immediately returned late on Wednesday.

Speaking in an East Room filled with lights and Christmas trees, Trump wished the crowd a happy Hanukkah before using the celebration of the eight holy nights to talk about the alleged strength of his campaign's legal efforts, which have been soundly defeated in multiple states.

Courts and election bodies have repeatedly ruled that the President's campaign has not presented evidence supporting its baseless claims of fraud and wrongdoing. Trump's allies were dealt a significant blow this week when the US Supreme Court denied a last-minute attempt to overturn the results in Pennsylvania.

But Trump remained upbeat at the party, citing Wednesday's news that 17 Republican-led states threw their support behind a lawsuit from Texas Republican Attorney-General Ken Paxton seeking to invalidate votes in key swing states the President lost to President-elect Joe Biden. That suit has been dismissed as a "disaster" by some experts and officials for pushing disproved allegations.

A maskless Trump also falsely told partygoers that he won this year's election against Biden "in a much easier way" than he did in 2016 against Hillary Clinton. While he earned more than 74 million votes last month, an increase of more than 11 million compared to his 2016 victory, Trump was bested by Biden's 81 million votes, the most ever for a presidential candidate.

As one guest could be heard coughing and attendees yelled out, "Rigged!" and "We love you!," the President asked the favourable crowd, "We got 75 million and we can't win the election?"