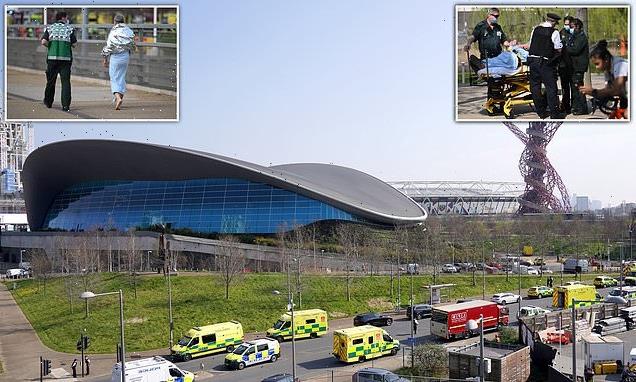 London Aquatics Centre remains closed today as a probe was launched into a chemical gas leak that left 29 people in hospital, with some forced to stay in overnight.

Hundreds of people were evacuated from the centre in London’s Olympic Park yesterday morning after a delivery is thought to have led to deadly Chlorine gas being pumped out into the air.

A total of 29 people were taken to hospital with breathing difficulties after the gas, which is used to disinfect swimming pool water, leaked out as a result of a ‘chemical reaction’.

Those affected, which included at least five children, were taken to Homerton Hospital, The Royal London Hospital (RLH) and Newham Hospital, with some being kept in overnight.

Dozens more people were treated at the scene by paramedics, while police and firefighters shut access to the site for hours while the evacuation took place.

The Health and Safety Executive is thought to be on the scene today, but no announcement has been made as to whether it will be conducting an investigation, however the centre itself is closed for a second day.

In a statement London Legacy Development Corporation, which runs Queen Elizabeth Park where the centre is based, said police remain in control of part of the building.

‘The incident has been reported to the Health and Safety Executive and the building will remain closed until Environmental Health Officers from the London Borough of Newham have carried out their investigation,’ she said.

‘Safety of our customers and staff is a priority and we will be working closely with those investigating so we fully understand the cause of the incident.’

‘Our thoughts are with those affected and our thanks go to the emergency services for their prompt action.’

Dramatic video and photos from the scene on Wednesday morning show dozens of ambulances, as well as firefighters and police helping people leave the venue. 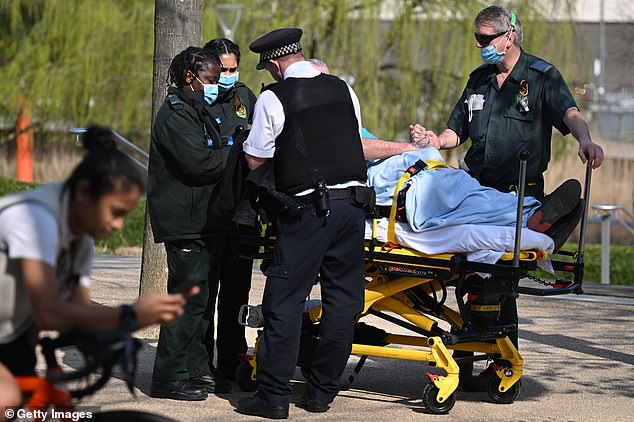 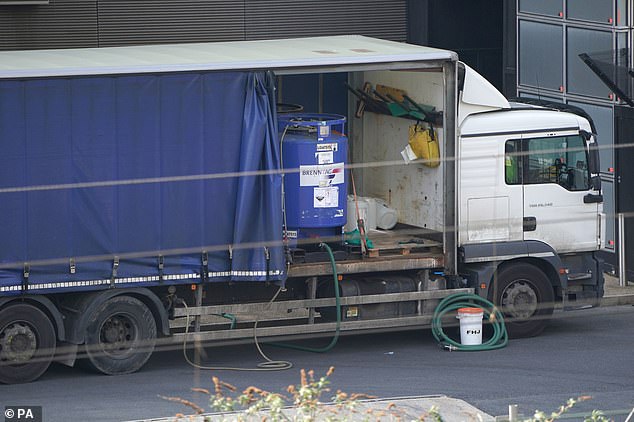 A lorry carrying a tank of hydrochloric acid, parked outside the Aquatics Centre at the Queen Elizabeth Olympic Park in London, following a gas-related incident sparked by a chemical reaction

One person was treated on a paramedic’s gurney while multiple swimmers, still in their trunks and goggles, were seen being cared wrapped in foil blankets to keep them warm.

Witnesses near the scene said they could smell chlorine which rapidly diffused once it was pumped into the atmosphere.

London Fire Brigade said a ‘high quantity of chlorine gas’ was released inside the Aquatics Centre at the Queen Elizabeth Olympic Park in London due to a ‘chemical reaction’.

In a statement on Twitter, the London Aquatics Centre said the leak had happened when its plant room took a delivery of chemicals.

‘At approximately 10am this morning we took the decision to evacuate the London Aquatics Centre,’ it said.

‘This was due to a release of gas that occurred when the facilities management company that operates the plant room took delivery of pool chemicals.

‘We are awaiting guidance on when the Centre will be able to reopen.’

A statement on the aquatic centre’s website added: ‘To ensure the safety of everyone in our community, London Aquatics Centre will remain closed on Thursday 24th March following a chemical gas leak incident on the morning of Wednesday 23rd March. 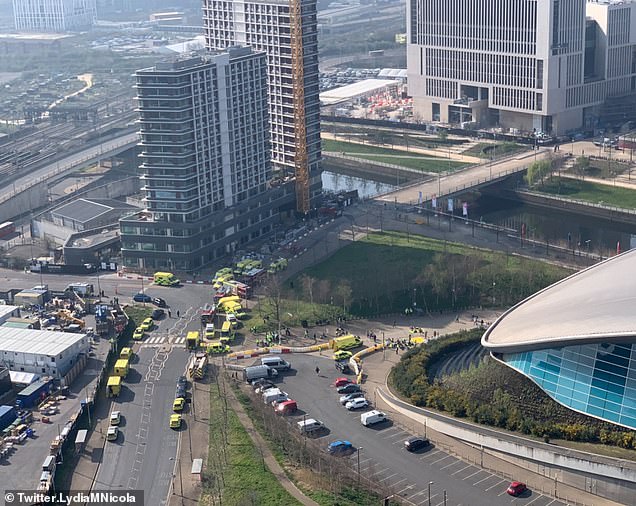 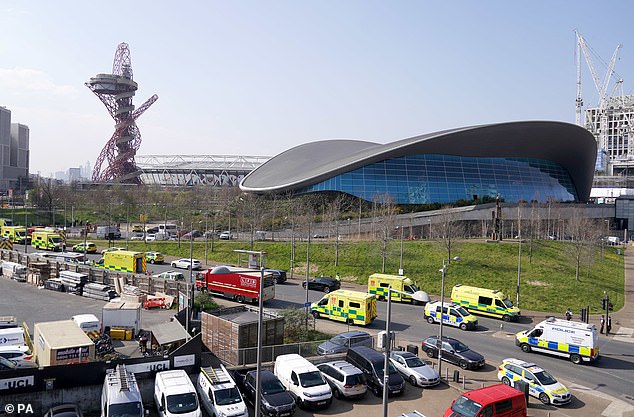 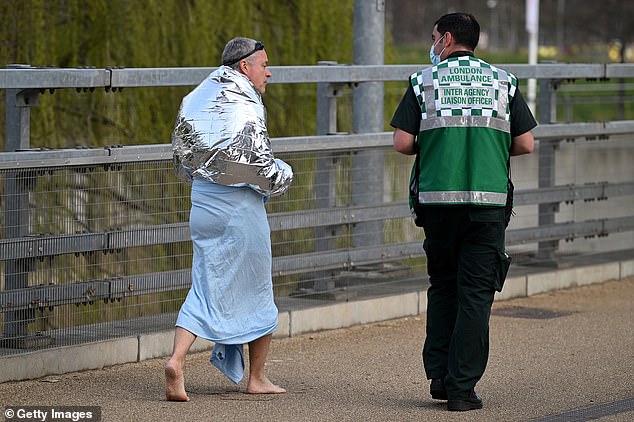 ‘If you had a booking at London Aquatics Centre for Wednesday 23rd March or Thursday 24th March, your booking has been cancelled and your account will automatically be credited.

‘Thank you for your understanding as we await further guidance on when we can re-open. Please return to this website for further updates on when we can welcome you back.’

A spokesperson for Homerton Healthcare NHS Foundation Trust, which runs Homerton Hospital, said it had received patients who required treatment for ‘respiratory problems’ following the incident.

The London Aquatics Centre has announced it will remain closed today, although the surrounding area has reopened 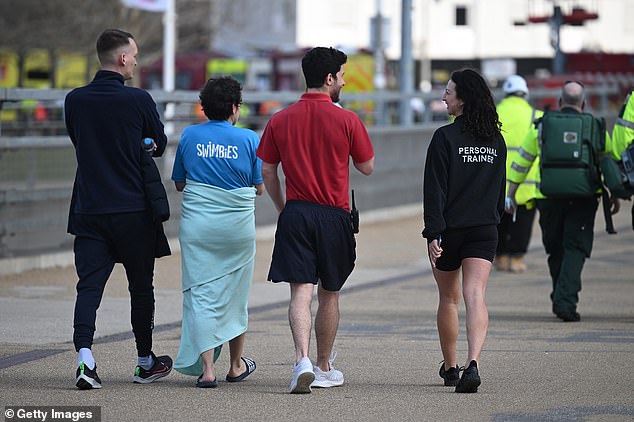 Swimmers, personal trainers and pool staff had to be evacuated from the building following the delivery error 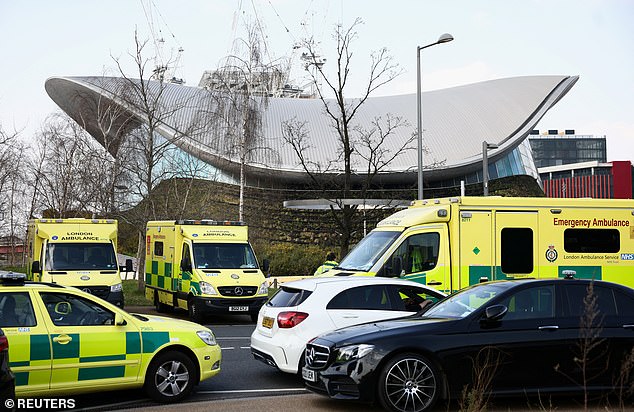 Emergency vehicles are pictured outside the Queen Elizabeth Olympic Park

A total of 18 people had been brought in to the hospital from the scene by paramedics, five of whom were children.

The spokesperson said: ‘We were put on alert by London Ambulance Service at around 10.30am. The first (patients) came in an hour and a half later. We were stood down at about 2.50pm.

‘The majority of people who were affected were treated at the scene by paramedics.’

He added ‘a couple of people’ had been kept in overnight as a precautionary measure.

A spokesperson for Barts Health NHS Trust, which runs RLH and Newham Hospital, said: ‘We are treating patients at Newham Hospital and The Royal London Hospital who were evacuated from the Queen Elizabeth Park aquatics centre following an incident.’

They added the trust had not declared major incidents at New Hospital or The Royal London Hospital. 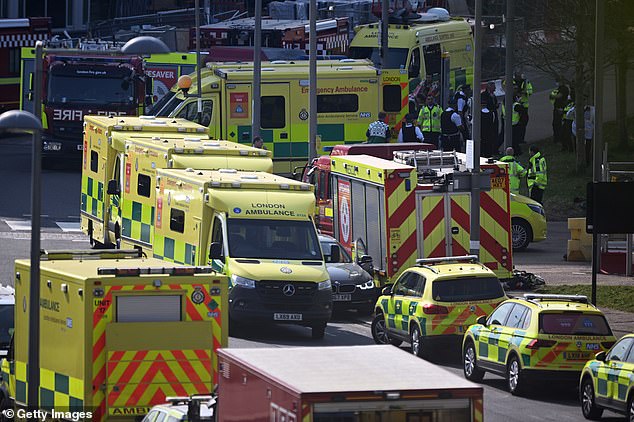 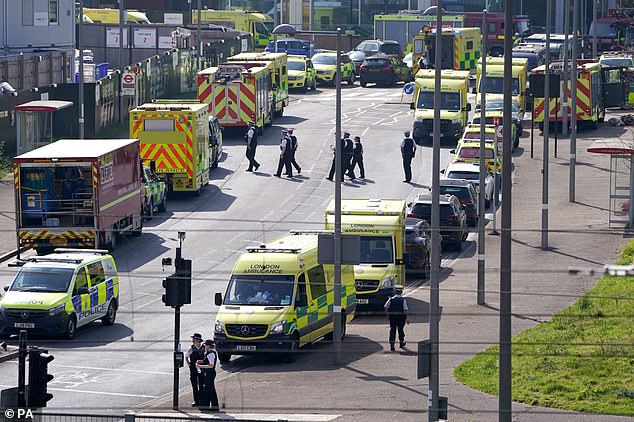 Emergency services near the Aquatics Centre, at the Queen Elizabeth Olympic Park in London, following a gas-related incident at the London Aquatics Centre 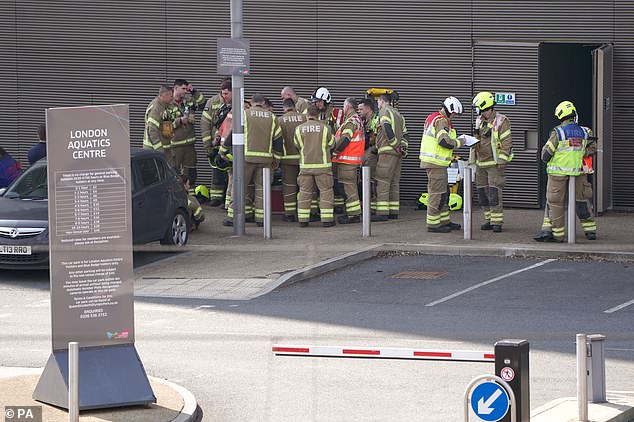 A team of firefighters make plans to enter the London 2012 Aquatics Centre, which is being ventilated due to the release of a deadly gas 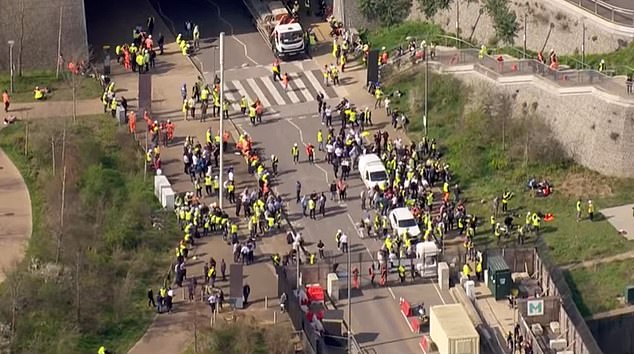 Pictures from the scene showed a blue lorry with tanks of hydrochloric acid abandoned outside shortly after the incident. It is not known what happened next, but for safety reasons, experts recommend that hydrochloric acid and pool chlorine should never be stored together – and should absolutely never, ever be mixed, under any circumstances – because they can cause the release of chlorine gas.

Chlorine gas, a substance so deadly it has been used as a weapon of war, can be fatal if breathed in. It also causes shortness of breath, blurred vision, burning pain in the nose, eyes and throat and and blisters on the skin.

Darren Farmer, London Ambulance Service gold commander, said yesterday: ‘This morning we responded to a major incident at the London Aquatic Centre in Stratford, alongside colleagues from the London Fire Brigade and Metropolitan Police.

‘We also dispatched medics from London’s Air Ambulance. Our crews took 29 patients to hospital and assessed a further 48 patients at the scene. The majority of patients were reporting minor breathing difficulties’.

LAS said it stood down its response shortly after 3pm. 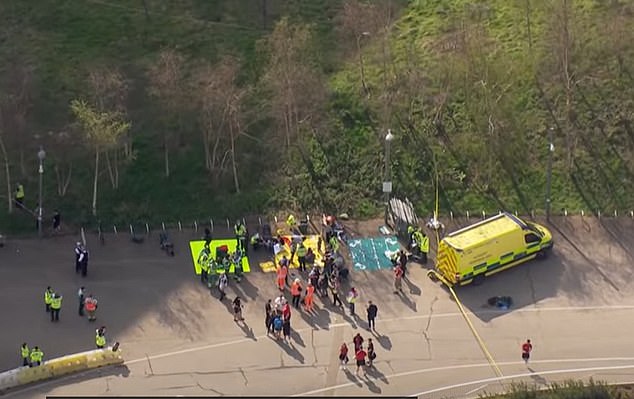 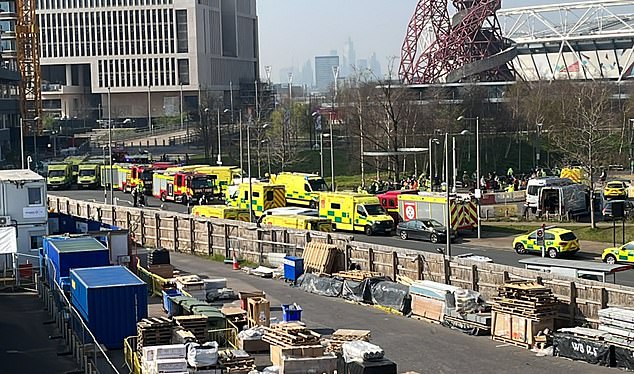 The building, close to West Ham United’s London Stadium (pictured right), has been evacuated and the Mayor of London has urged people to avoid the area

Chlorine is the 17th element in the periodic table and forms the basis for many everyday household bleaches.

It is also known for its use in swimming pools, where it reacts with the water to form hypochlorous acid that kills bacteria to give sanitary conditions.

But it has a darker history from its use in warfare, with its first appearance being during the First World War at Ypres in April 1915.

The Germans used it against the French and killed 100 men, before more gas attacks were carried out by both sides as the war continued.

The Geneva Protocol of 1925 banned the use of chemical weapons in war, but they were still used in the 1930s by Italy against Ethiopia, and Japan against China.

Improved defences such as gas masks, clothing and detectors made chemical warfare innefectual by the Second World War – although they were used in the Yemeni conflict of 1966-67 and the Iran-Iraq War of 1980-88. But they have since remerged as a weapon during the Syrian civil war, with more than 80 people killed in a recent suspected chemical attack.

A builder told The Standard he saw a group of children evacuated from the building along with several older people.

He said: ‘The children looked ok but the group of elderly people looked worse off.’

The Aquatics Centre was ventilated for most of the day and the Mayor of London urged people to avoid the area.

‘Due to a chemical reaction a high quantity of chlorine gas was released. London Ambulance Service are treating a number of patients’, a London Fire Brigade spokesman said.

He added: ‘Around 200 people were evacuated from the centre. While we ventilate the premises we would ask those residents in the immediate vicinity to close doors and windows’.

The London Ambulance Service were called the the Olympic Park in east London at just before 10am after a noxious substance leaked into the building containing the swimming pool and diving area.

People described suffering headaches and struggling to breathe because of the fumes. Some were seen lying on their backs on the pavement.

A spokesman for the Queen Elizabeth Olympic Park tweeted:  ‘There has been an incident @AquaticsCentre this morning involving the release of a gas.

‘The area has been cordoned off and evacuated. We’re working with emergency services on site. There are a number of casualties with breathing difficulties being treated by @Ldn_Ambulance’.

Pictures from the scene showed more than 20 ambulances and three fire engines outside the sealed off building being supported by police. Footage filmed from helicopter showed paramedics treating people in the car park outside.

Police evacuated the swimming pool and cordoned off the surrounding area in Stratford, East London at around 10am.

A Scotland Yard spokesman said: ‘Officers were alerted by London Fire Brigade at 9.53am on Wednesday to a leak of noxious fumes at the Aquatics Centre, Queen Elizabeth Park, E20.

‘Officers and London Ambulance Service have also attended the scene. A number of people have been evacuated from the premises.’ 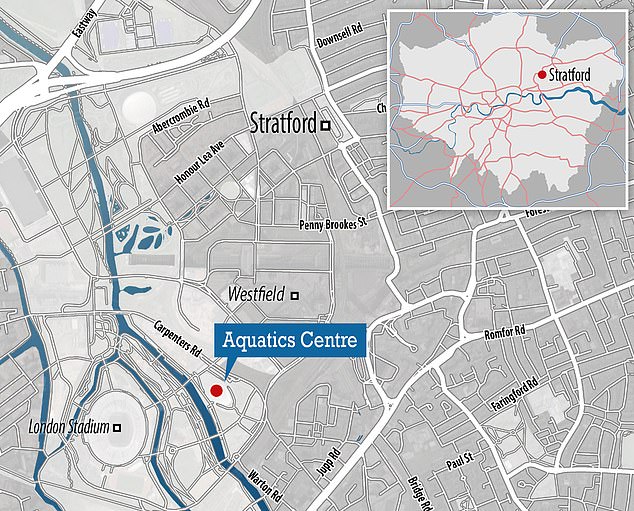 British Olympic diver Tom Daley performs a dive into the dive pool of the Aquatics Centre, venue for the London 2012 Olympic Games. It has been evacuated today