Home » World News » Oh, nose!: Monk seals are getting eels stuck up their snouts and nobody knows why 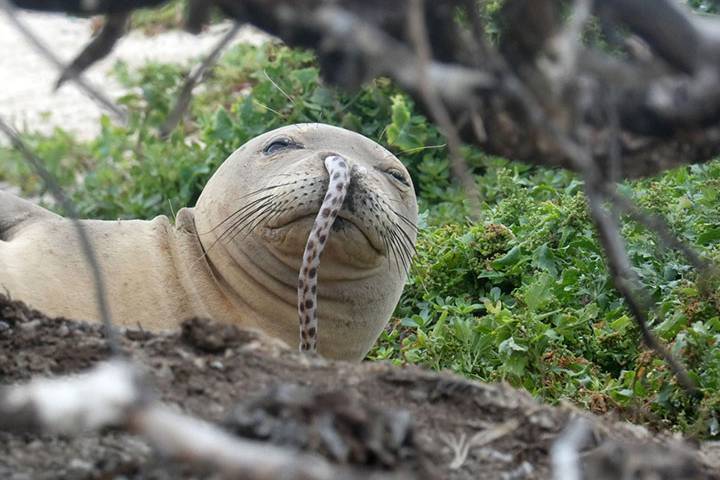 Oh, nose!: Monk seals are getting eels stuck up their snouts and nobody knows why

Nosy researchers are trying to understand why Hawaiian monk seals keep getting slippery eels lodged up their snouts, adding to the challenges faced by the endangered species.

“Mondays…it might not have been a good one for you, but it had to have been better than an eel in your nose,” the agency said in a Facebook post. “We have reported on this phenomenon before, which was first noted a few years back. We have now found juvenile seals with eels stuck in their noses on multiple occasions.”

But researchers are still baffled as to why and how this happens.

“Our researchers have observed this phenomenon three or four times now. We don’t know if this is just some strange statistical anomaly or if we will see more eels in seals in the future,” NOAA said. “Hawaiian monk seals forage by shoving their mouth and nose into the crevasses of coral reefs, under rocks, or into the sand. They are looking for prey that likes to hide, like eels.”

The NOAA suggested that perhaps the seal had cornered the eel and the slippery creature tried to defend itself or escape before becoming the seal’s lunch.

“Alternatively, the seal could have swallowed the eel and regurgitated it so that the eel came out the wrong way,” NOAA said. “We might never know.”

Researchers noted that in all the cases, the eels have been successfully removed.

Officials estimate only about 1,400 Hawaiian monk seals remain in the wild, most of which are found near the northwestern Hawaiian Islands.