Christchurch: The New Zealand government will ban young people from ever being able to purchase tobacco in their lifetime under world-leading plans to make the country smoke-free.

Older generations will only be able to buy tobacco products with very low-levels of nicotine, and fewer shops will be able to sell tobacco products, Associate Health Minister Dr Ayesha Verrall announced in Parliament on Thursday. The measures are part of the government’s new Smokefree 2025 action plan.

“We want to make sure young people never start smoking, so we will make it an offence to sell or supply smoke tobacco products to new cohorts of young people,” she said. “People aged 14 when the law comes into effect will never be able to legally purchase tobacco.” 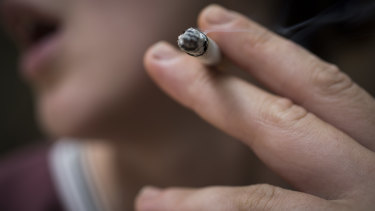 The plan: Banned from smoking as soon as they turn 14, New Zealanders will then not be able to buy or smoke cigarettes during their lifetime.Credit:Dominic Lorrimer

She said more was needed to be done to stop young people from taking up smoking in the first place and to make it less addictive and appealing.

Smoking is the leading cause of preventable death in New Zealand and causes one in four cancers.

“While smoking rates are heading in the right direction, we need to do more, faster to reach our goal,” Verrall said.

“If nothing changes, it would be decades before Māori smoking rates fall below 5 per cent and this government is not prepared to leave anyone behind.” 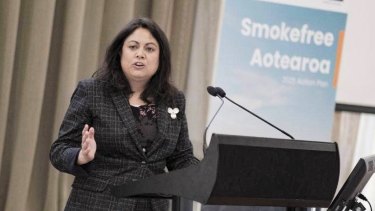 There would be an estimated NZ$5 billion ($4.7 billion) in savings on future public health expenditure as a result of the plans, she said.

Some decisions in the plan are non-legislative, such as practical support measures for smokers, but others will require amendments to existing legislation. These are expected to be passed next year.

They include ensuring smoked tobacco products are only sold by authorised retailers, that only products with very low nicotine levels are permitted to be manufactured, imported, distributed and sold, and that designs aimed at enhancing the appeal and addictiveness of smoking products are restricted.

As many as 8000 retailers sell tobacco nationally now, but this would be cut down to about 500 under the new rules – meaning 7500 would need to transition to a new business model.

Legislators would also “think very carefully” about how the laws would be enforced to stop an illicit tobacco market forming.

The Ardern government would also set up a Māori advisory taskforce with a focus on achieving better outcomes for Māori, chaired by Dame Tariana Turia, and to hold the Ministry of Health, Government and tobacco control sector to account over the plan, she said. A Pacific advisory group would also be established in the new year.

“Cigarette smoking kills 14 New Zealanders every day and two out of three smokers will die as a result of smoking. We believe that this action plan offers some hope of realising our 2025 Smokefree Aotearoa goal, and keeping our tamariki smoke-free,” he said.

“Once these measures are implemented, cigarettes will no longer be addictive and will reduce the number of young people who start smoking,” she said.

Collin Tukuitonga, associate dean Pacific at the University of Auckland’s faculty of medical and health sciences, said ​the government should be commended on the new measures, while preventative actions should be focused on Māori and Pacific communities.

“It is important that a focus on these efforts should be in neighbourhoods where Māori and Pacific people live. Experience with the COVID-19 vaccination rollout has reminded us of the importance and impact of community-led events,” he said.

Boris Johnson's Plan B Covid curbs at a glance