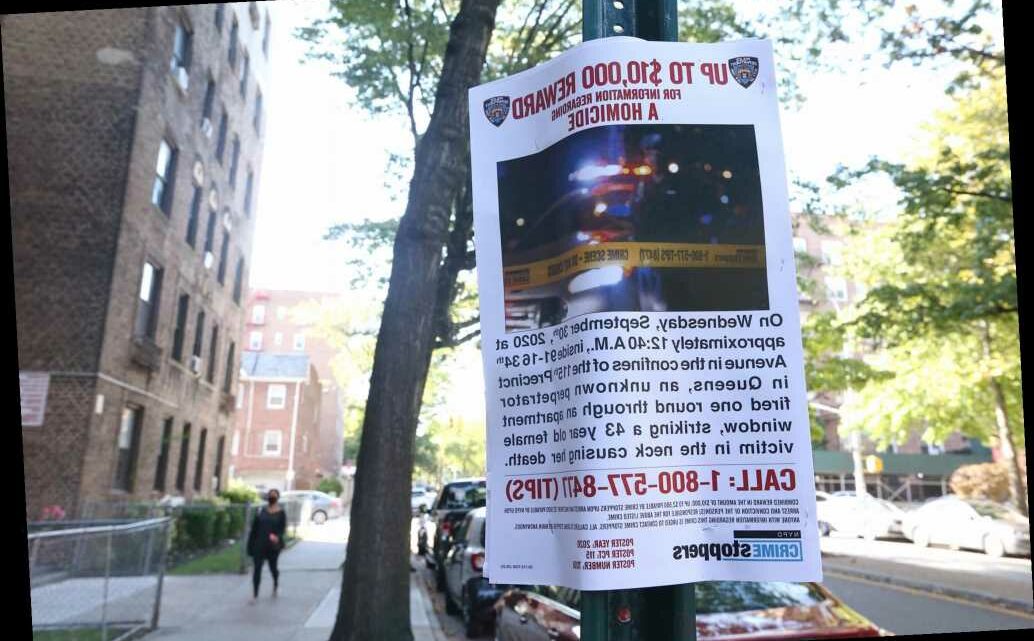 The NYPD is offering a $10,000 reward for tips leading to the arrest of a gunman whose stray bullet killed a Queens mom inside her bedroom, cops said Thursday morning.

Bertha Arriaga, 43, was inside the family’s Jackson Heights apartment on 34th Avenue around 12:45 a.m. when she heard some commotion, went to the window and was struck in the neck by a bullet that sailed inside, according to police and the family.

Arriaga’s 14-year-old son, Angel Gabriel, heard the gunfire and rushed into the room, where he found his mom bleeding to death. He called 911, but by the time police arrived, it was too late. Arriaga was pronounced dead at the scene.

In the moments before the shooting, two men tried to steal a bicycle that was locked up on a street pole outside the building, cops said.

Footage released later Wednesday shows the men — one on a scooter — attempting to saw the lock off the bicycle before leaving empty-handed.

The award includes $2,500 offered by Crime Stoppers upon the arrest and indictment of those responsible, and $7,500 from the NYPD upon conviction, cops said.

Signs advertising the reward were plastered around the neighborhood Thursday morning. One of the flyers was attached to the pole where the bike — which the men had attempted to steal — was chained.

Relatives were inside the home Thursday morning, discussing whether to have Arriaga’s body cremated or to send it to Mexico City, where the family is from, her husband, Jorge Aguilar, 56, briefly told the Post.

Within an hour, three plain clothes officers with badges on their suits arrived in a black unmarked car, went inside the home and came back out with the family, who left with them.

“She met my brother 20 years ago and fell in love and they started a beautiful family,” he wrote. “They have 3 wonderful boys…14, 10 and 6 years old.”

“Unfortunately her dream of seeing his 3 sons grow up and go to college was cut too soon,” he added. “While she was sleeping with her three sons she [heard] noises that [woke] her up and got her to [peek] out of the window not knowing that a stray bullet will take her life away.”

I Spent all Day Sitting in These $38 Jeans — And Look Mom, No Hip Marks!
World News