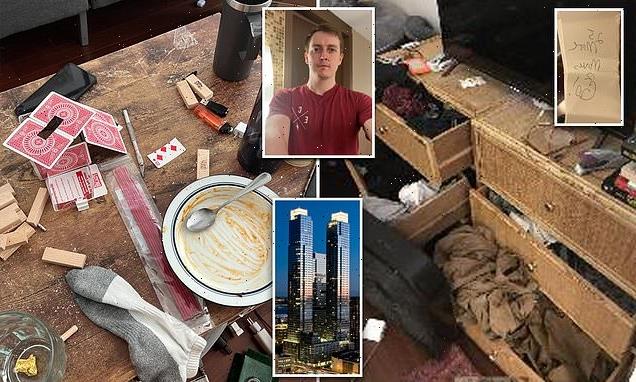 EXCLUSIVE: Software engineer, 28, returns home after six days of vacation to discover a STRANGER turned his NYC apartment into a drug den littered with dirty needles and strange handwritten notes

A 28-year-old Manhattan man returned home from vacation to discover that a stranger had been living in his apartment while he was away – sleeping in his bed, wearing his clothes, eating his food, and even doing drugs.

Thomas Mayo-Smith said the hellish discovery was made on September 6 when he returned home to his apartment at Silver Towers, a high-rise building located on West 42nd Street.

He said before he left on his trip he locked his apartment door.

The software engineer told DailyMail.com that when he returned to his apartment it was in shambles and appeared to have been burglarized and transformed into a drug den.

‘There was drug paraphernalia next to my couch,’ Mayo-Smith said. ‘The Creeper left behind needles, a suitcase, shoes, dirty dishes, and hair shavings in the bathroom sink.’

What made the ordeal even more terrifying was that once Mayo-Smith was inside, he thought the vandal was still there ‘hiding.’

‘I tiptoed around with a baseball bat like an idiot until it was clear that the apartment was empty.’

He also said strange handwritten notes were left behind. One of the messages said: ’25 more moves to go,’ and cryptic symbols written on the wall. 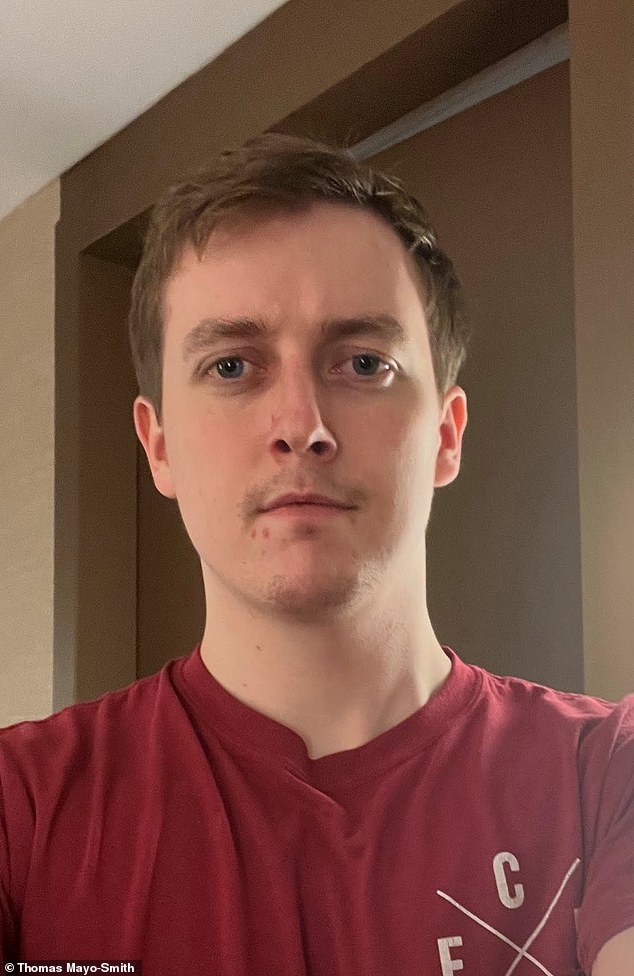 Thomas Mayo-Smith says that, in his six-day absence, someone was sleeping in his bed, wearing his clothes, eating his food, and even doing drugs in his apartment. He said he locked his door before he left for his trip 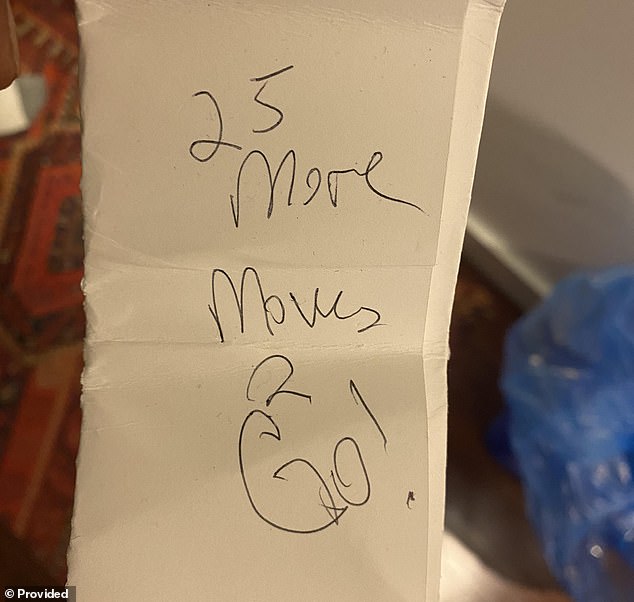 He also said strange handwritten notes were left behind. One of the messages said: ’25 more moves to go,’ and cryptic symbols were written on the wall 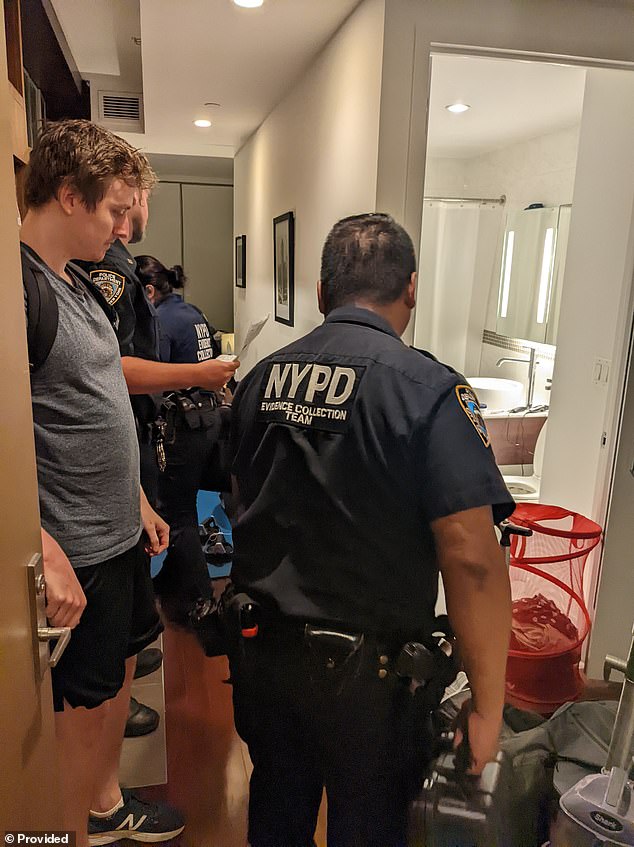 The hellish discovery was made on September 6 when Mayo-Smith, a software engineer, returned home to his apartment at Silver Towers, a high-rise building located on West 42nd Street

An NYPD spokesperson said an ‘unknown individual(s) entered the apartment and removed approximately $3,494 worth of items and fled.’

‘There are no arrests at this time and the investigation is ongoing.’

According to Dara McQuillan, Chief Marketing & Communications Officer at Silverstein Properties, however, the police found no sign of forced entry.

‘The only way someone could have entered his apartment is if he let them in, or if he left his door unlocked,’ McQuillan said.

According to Mayo-Smith, the vandal stayed in his studio apartment for days accessing his streaming media accounts, hacking into his private email, and accessing information health, tax and financial documents.

Utterly shaken by what had taken place, the resident said that at the advice of the NYPD, he temporarily moved to a hotel.

Part of the reason, he said, was the NYPD Evidence Collection Team warned there was risk of contracting Hepatitis B  from the needles and bodily fluids that were left behind.

He said he has lived at the building for more than two years, and whoever was in his apartment ‘completely escaped the notice of Silver Towers security.’

According to McQuillan, Silver Towers has studio, one and two-bedroom apartments. Studio apartments start at $3,000 a month and can go up to $5,000 to $7,000 a month for a two-bedroom depending on how high up you are.

Mayo-Smith told DailyMail.com that although the high rise has a doorman, ‘anyone with a pizza box and an apartment number can get into the building.’

‘Tenants rarely get calls for guests/delivery people,’ he said. ‘I’ve specifically told the front desk on numerous occasions after the burglary to call me for every guest who wants to see me.’

‘Somehow a CBS reporter with a camera crew and multiple delivery people were able to reach my apartment door without me receiving a call. I have video evidence of this.’

McQuillan told DailyMail.com that ‘our policy is that when visitors arrive, they have to check in with the front desk, and are only admitted when our concierge speaks by phone with the resident, who has to confirm that they are expecting that visitor.’ 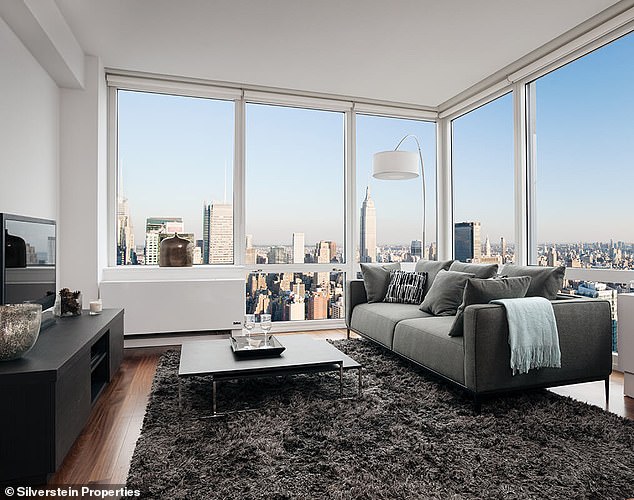 The photo (pictured) is of a ‘model’ studio apartment that is shown to prospective tenants and similar to the apartment Mayo-Smith occupies. The  high-rise building owned by Silverstein Properties has stunning views of the Hudson River 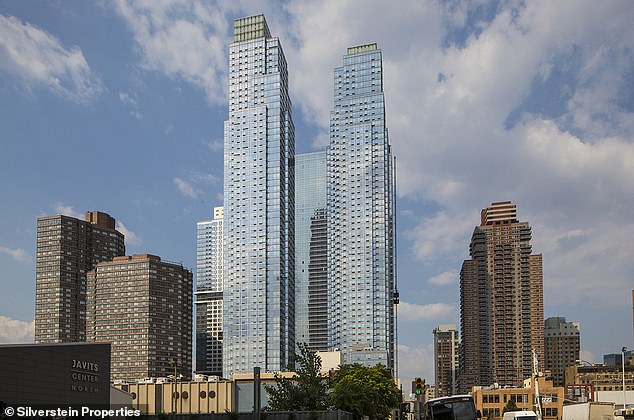 Mayo-Smith said when once building management was notified of the ordeal they ‘haven’t done much.’

But, said that it has nothing to do with the doormen but instead with building management and their head of security.

‘I think the doormen at Silver Towers have an impossible job – especially during the morning and evening rush. There is so much going on that it is easy for someone to just enter the building.’

Once he arrived back to his apartment and saw the destruction, he filed a report with the Tenth Precinct giving them a meticulous breakdown of the the person’s possible arrival time – between September 1 to September 3 – and departure – September 5 to September 6.

He said during the filing, he learned that the NYPD calls squatting cases like this ‘creepers.’

Some of the items that were stolen were his checkbook, backpack, electric toothbrush, pocketknife, shoes, and iPhone 13.

There were also some very sentimental items taken, including a clay mold of his dog’s paw that he got made after she died, an old Roman coin, and a piece of a meteorite.

When he returned to his apartment after living in a hotel, he said it was difficult to sleep – and still felt unsafe, but said after he created his own security system, he feels more confident.

‘I turned my apartment into a burglar’s nightmare,’ Mayo-Smith told DailyMail.com

‘I made it more complicated to open my door while I’m inside my apartment, if a pin drops while I’m away I’ll instantly know about it and there’s no longer anything of value that’s easily stealable here.’

He added: ‘If the psycho really wants to find me it’s unfortunately likely they’ll be able to do it unless I take really drastic measures.’

‘Given they went through my entire phone, the burglar likely knows what I do for work, where I go out and who my friends/family/acquaintances are. They also accessed my calendar and know about vacations/weddings etc. that have been planned a year in advance.’

A few days after Mayo-Smith returned to his apartment, McQuillan said the tenant sent a letter to management -that he showed to DailyMail.com – ‘asking to be moved to a larger apartment with 18 months of free rent.’

‘That is an odd request from someone who now claims to feel unsafe in our building,’ McQuillan said.

Mayo-Smith said he sent that letter to management on September 9. He had asked for the ‘free-rent’ out of frustration for what he was going through.’

He said days later he received a letter in the mail from an attorney representing Silverstein Properties.

In the letter, Mayo-Smith said the lawyer, said in part, ‘there are no unaccounted for individuals who we have noted accessing the building over the past 10 days.’

But, Mayo-Smith told DailyMail.com the building ‘does not account for individuals accessing the building.’

He added: ‘I learned from the head of security at Silver Towers that nothing even close to 10 days of security cam footage was actually reviewed.’

He said as of September 26, twenty days after the burglary, Silver Towers still hasn’t sent unedited footage to the NYPD due to so called technical issues.’

‘Building management/security is likely not your friend – their primary goal will be to absolve themselves of any fault – from my experience this involves an absolutely absurd amount of gaslighting,’ he said.

‘They’ll try to convince you your own shoe got stuck in your apartment door (preventing it from closing) and the whole time you were away you didn’t realize you were walking around barefoot.’ 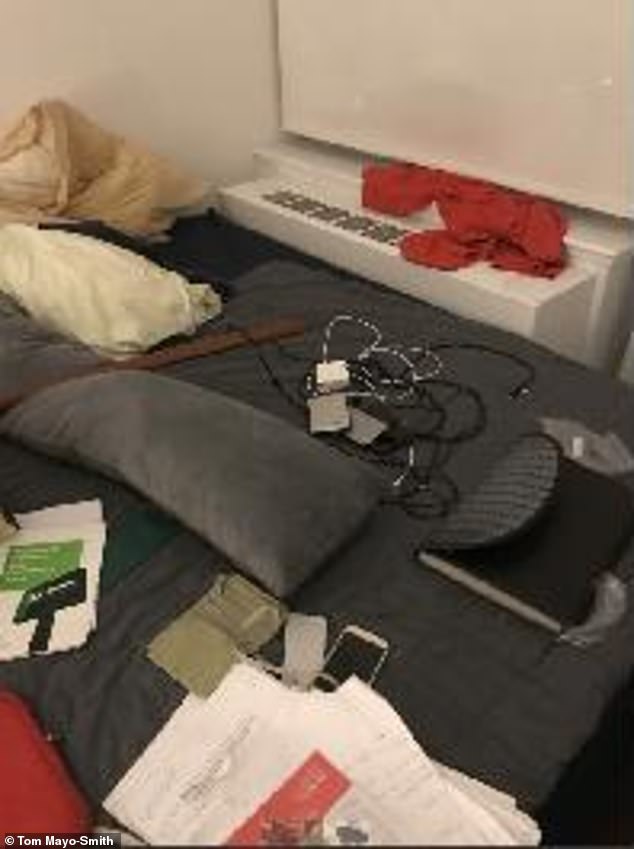 Building management are skeptical of Mayo-Smith’s claims. He asked to be moved to a larger apartment with 18 months of free rent after the ordeal. ‘That is an odd request from someone who now claims to feel unsafe in our building,’ management said 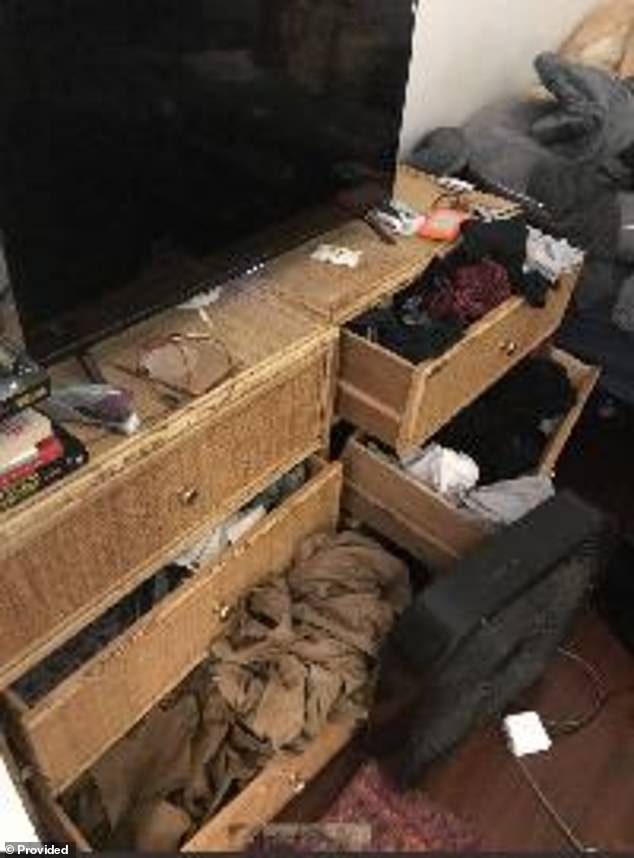 Some of the items that were stolen were his checkbook, backpack, electric toothbrush, pocketknife, shoes, and iPhone 13. He said that some very sentimental items were also taken, including a clay mold of his dog’s paw that he got made after she died, an old Roman coin, and a piece of a meteorite 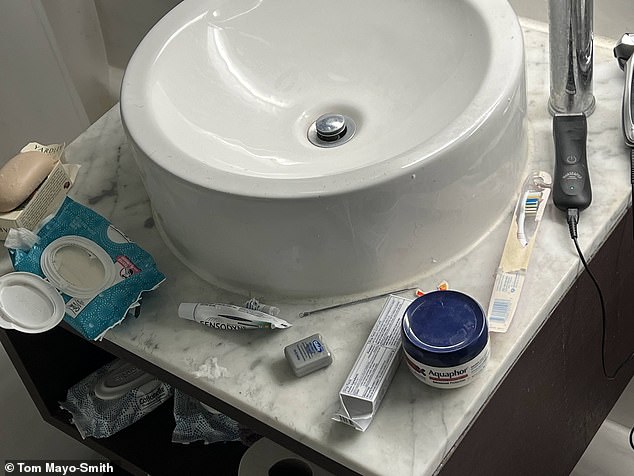 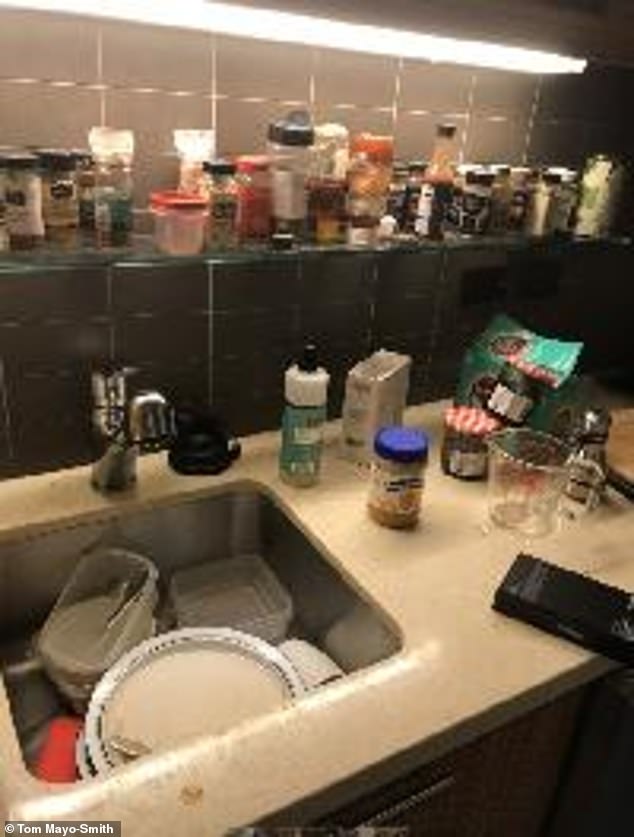 McQuillan, however, told DailyMail.com that ‘his story doesn’t add up.’

‘I feel badly for Mr. Mayo-Smith, and wish him nothing but the best,’ he said. ‘There is no evidence at all that anyone broke into his apartment while he was away.’

McQuillan explained that the Silver Towers property is a luxury residential building with a fully staffed lobby 24 hours a day, key fob access to the elevator lobby, cameras in the lobby and elevators, and digital key access to each apartment.

He said that at any given time, the building is staffed by a doorman, a concierge in the lobby, a package room staffer, a security guard in front of the building, and several roving security guards throughout the property.

He said the only way into an apartment is with a unique digital key that leaves a record of when it is used.

‘When Mr. Mayo-Smith reached out to us, the first thing we did was check those records. They showed that the only time his apartment door was unlocked was before he left, and once again when he came back,’ McQuillan said.

‘The security in the building is first-class in every way. There is no way into the building without a key fob. Residents need their key fob to access the elevator lobby, as well as their own individual digital key to access their apartments.

He said they have been cooperating with the investigation, sharing key logs, video footage from the lobby and elevators with detectives.

‘We are waiting for them to complete their investigation,’ he added.

In the interim, Mayo-Smith said he doesn’t believe anyone will be caught, and he must move on with his life.

‘This is a very serious event, but at the same time it’s really tricky to put my entire life on pause,’ he told DailyMail.com.

”It would be nice in the meantime for Silver Towers to enhance their security in even the smallest of ways.’

He added: ‘My hope is that if this story has enough notoriety, people will start to connect the dots between different burglaries,’  he said, ‘especially since the perpetrator claimed he was going to do this 25 more times.’ 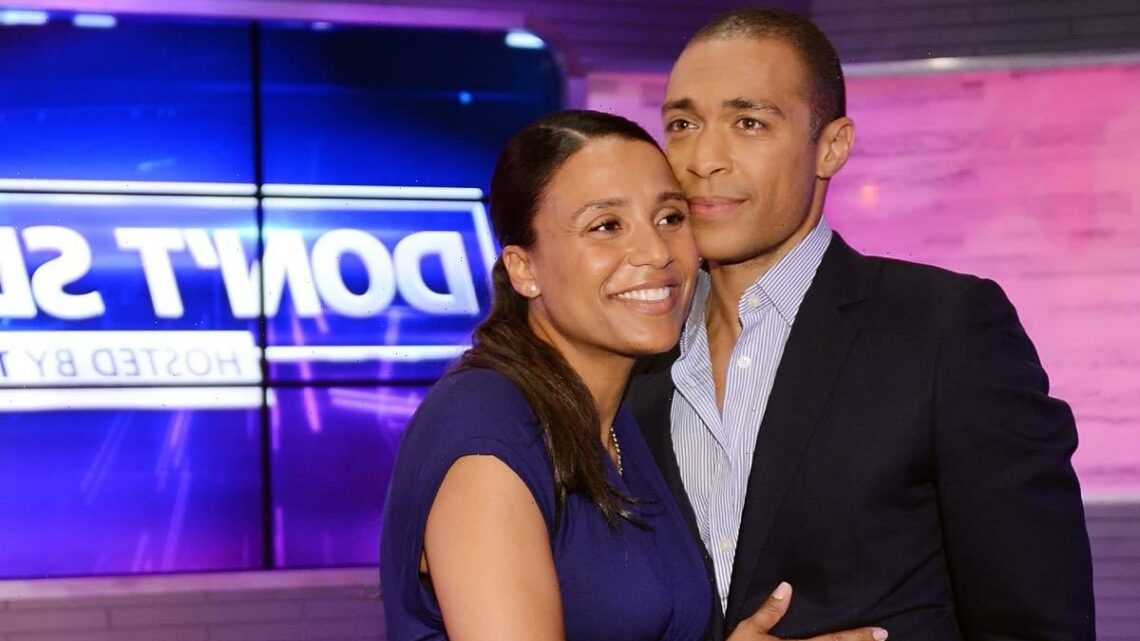