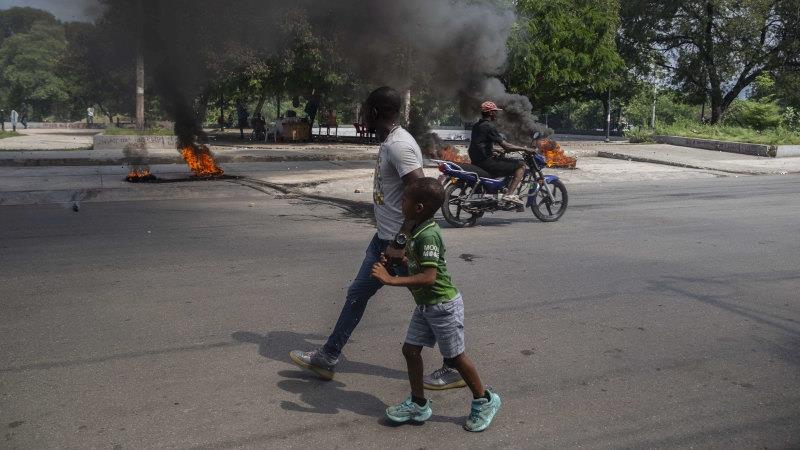 Notorious Haitian gang blamed for kidnapping 17 missionaries from US, Canada

Port-au-Prince: A missionary group including 16 Americans and one Canadian were kidnapped in Haiti while on a trip to an orphanage, the Ohio-based Christian Aid Ministries group said on Sunday.

“We request urgent prayer for the group of Christian Aid Ministries workers who were abducted while on a trip to visit an orphanage on Saturday, October 16,” it said in a statement, saying seven women, five men and five children were taken. 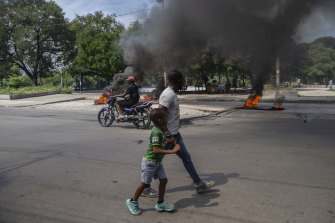 A man and a child walk by burning tires on a street on Sunday in Port-au-Prince, Haiti, where a group of 17 missionaries, including children, was kidnapped by a gang.Credit:AP

The 400 Mawozo gang kidnapped the group in Ganthier, a community that lies east of the capital of Port-au-Prince, Haitian police inspector Frantz Champagne said. The gang was blamed for kidnapping five priests and two nuns earlier this year in Haiti.

The gang, whose name roughly translates to 400 “inexperienced men,” controls the Croix-des-Bouquets area that includes Ganthier, where they carry out kidnappings and carjackings and extort business owners, according to authorities.

The gang members kidnapped the group after they left an orphanage in the Caribbean nation, where violence has surged since the assassination of President Jovenel Moise in July and an earthquake in August, CNN and the New York Times reported earlier.

Christian Aid Ministries provided no information about where the group may have been taken or on efforts to free them, beyond saying “we are seeking God’s direction for a resolution, and authorities are seeking ways to help”.

Nearly a year ago, Haitian police issued a wanted poster for the gang’s alleged leader, Wilson Joseph, on charges including murder, attempted murder, kidnapping, auto theft and the hijacking of trucks carrying goods. He goes by the nickname “Lanmò Sanjou,” which means “death doesn’t know which day it’s coming”.

Joseph, who could not be immediately reached for comment, has posted videos detailing the alleged crimes the gang has committed in recent years. 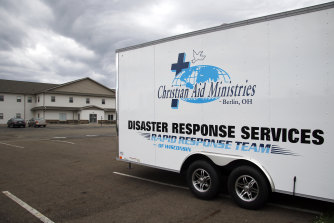 Christian Aid Ministries in Berlin, Ohio, said the missionaries were on their way home from building an orphanage when they were kidnapped. Credit:AP

Once, when the gang opened fire on a small bus carrying several passengers and killed an infant, Wilson said it was not their fault because the bus driver refused to stop. In a more recent video, he appears holding a bottle of alcohol surrounded by heavily armed men. Another video from June shows people inside a church fleeing as gunfire erupted outside on a Saturday morning. The gang was accused of raiding the area and setting cars on fire.

A senior US official, speaking on condition of anonymity, said the United States is in touch with Haitian authorities to try to resolve the case.

US congressman Adam Kinzinger, an Illinois Republican, told CNN the United States must find the group and see if it can negotiate their release without paying a ransom or should use the military or police to secure their freedom.

“We need to track down where they are and see if negotiations – without paying ransom – are possible. Or do whatever we need to do, on a military front or a police front,” Kinzinger who sits on the House Foreign Affairs Committee, said.

Asked if it could confirm the kidnapping, a spokesperson for the US State Department said only that it was aware of the reports, adding: “The welfare and safety of US citizens abroad is one of the highest priorities of the Department of State.”

The Department had warned US citizens on August 23 against travelling to Haiti, the poorest nation in the Americas, citing the risk of kidnapping, crime, civil unrest, and COVID-19.