Home » World News » ‘Nothing to do with me’: PNG leader distances himself from suitcase of cash

‘Nothing to do with me’: PNG leader distances himself from suitcase of cash

Singapore: Papua New Guinea Prime Minister James Marape has declared he has no connection to a suitcase of cash discovered on a charter flight on the eve of the country’s elections.

Marape’s son Mospal was detained and spent two nights in a cell after police found 1.56 million kina ($644,000) on a plane that landed in the highland province of Hela on Saturday. 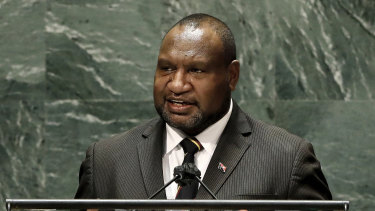 James Marape is seeking to be extend his three years in power in Port Moresby.Credit:AP

Elections in PNG have long been blighted by fraud and payoffs as well as deadly violence and an Australian Defence Force team has been deployed to assist more than 10,000 local police and armed forces personnel on security and logistics for this year’s poll.

But as nearly three weeks of voting began, Marape said he had no involvement in the transportation of the banknotes.

“I just want to inform the country [it’s] nothing to do with me,” he told local media.
“I have never used money to win elections.”

Marape, who has held the top job in Port Moresby since 2019, also stressed that his son was not linked to the suitcase of cash, which he said was owned by a construction company. He said his son had been picked up by police because he had been in the vicinity of the plane while taking a group of visiting reporters around the town of Komo and had been released on bail.

The arrest provided an eventful start to the elections, which started on Monday, run to July 22 and include 3625 candidates.

More than 130 Australian troops have been on the ground since last month, distributing ballot papers to some of the most remote areas of the country on Royal Australian Air Force aircraft.

Australia has also provided its near neighbour with 3000 ballistic vests and helmets to aid its costly election security effort.

There were 204 election-related deaths during the 2017 polls, according to an observer group from the Australian National University, and police have said they have recorded 15 fatalities to date during this year’s campaign.

Marape is facing a challenge from former prime minister Peter O’Neill, who is bidding to return to power three years after resigning following a series of defections from his governing party. 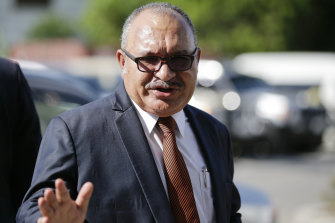 A former finance minister under O’Neill, 51-year-old Marape has the advantage of incumbency in a nation where ruling parties tend to be returned.

But he has faced criticism from businesses over his “Take Back PNG” policy, under which the Porgera gold mine was shut in 2020. Amid an ailing resources sector the country is also struggling to emerge from the COVID-19 pandemic. Only 3 per cent of the population of 9 million are fully vaccinated.

“Right now PNG is suffering from reduced income and high levels of debt so it’s a time when the government needs income badly,” said Mihai Sora, a research fellow in the Pacific Islands program at the Lowy Institute and project director of its Aus-PNG network.

“These things have put the PNG government under a lot of pressure.”

The elections are also being held with the backdrop of China’s bid to extend its influence.

O’Neill took aim at Marape over the timing of a visit in late May by China Foreign Minister Wang Yi, coming so soon before voters cast their ballots, but the former PNG leader has also been highly receptive to Chinese investment in the past.

Wang was touring the region as Beijing was seeking to convince Pacific nations to sign wide-ranging agreements with China, having the previous month clinched a controversial security deal with Solomon Islands.