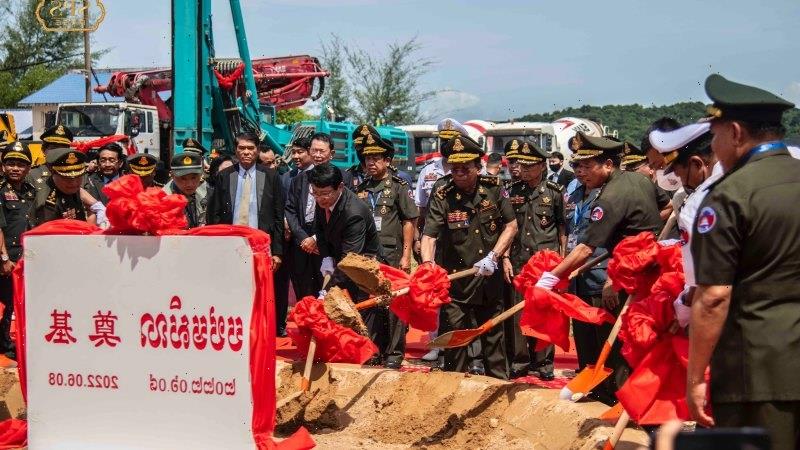 Singapore: Cambodia has denied new claims that China’s military will have access to a controversial naval base on the Gulf of Thailand after Foreign Minister Penny Wong raised it directly with its deputy leader.

In a phone call with Cambodia Deputy Prime Minister and Minister for Foreign Affairs Prak Sokhonn, Australia’s new top diplomat asked about a report by The Washington Post that quoted an unnamed Chinese official saying the People’s Liberation Army would have exclusive use of a new facility Beijing is financing at the Ream Naval Base. 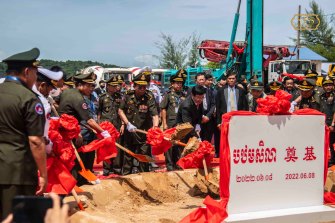 Cambodian and Chinese officials take part in a groundbreaking ceremony at the Ream Naval Base on June 8. Credit:General TEA Banh/Facebook

According to a statement from Cambodia’s Ministry of Foreign Affairs, Sokhonn told Wong that Hun Sen’s government rejected the “groundless accusations”, reiterating its “firm adherence to the constitution of Cambodia, which does not permit foreign military bases or presence on Cambodian soil”.

The renovation of the base has long been viewed with suspicion by the United States and Western allies, who fear that China, which is funding and building the project, would seek to establish another strategic foreign military outpost to add to the one it already has in Djibouti, Africa.

The latest report prompted Prime Minister Anthony Albanese to express concern and call on Beijing to be transparent about its intentions for the port.

Sokhonn, however, maintained in his conversation with Wong that Ream was being upgraded purely to enhance Cambodia’s own naval capabilities and help it crack down on maritime crime. China also denied having grander ambitions there. 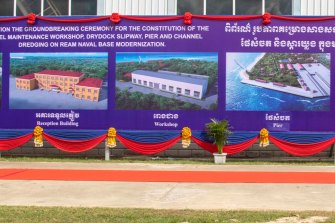 Details of some of the facilities China will finance and build at the Cambodian Ream Naval Base.Credit:General TEA Banh/Facebook

During a speech at a groundbreaking ceremony for new facilities at the base on Wednesday, China’s ambassador to Cambodia, Wang Wentian, said he had “noted that certain countries have inflated their propaganda and smeared the normal relation between Cambodia and China”, accusing them of “using democracy as an excuse” to interfere in Cambodia’s internal affairs.

“We absolutely oppose these acts,” he said. “Hopefully certain countries will abide by what they have said and join and cooperate with the countries in the Asia-Pacific region. China is a neighbouring country which is a friend that Cambodia can trust and can rely on forever.”

Wang had a day earlier been pictured swimming in the ocean with Cambodian Defence Minister Tea Banh, who said they had gone for a dip “in order to strengthen cooperation” between the two countries. 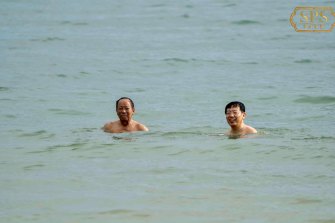 Tea Banh is expected to meet with Australian Defence Minister Richard Marles, US Defence Secretary Lloyd Austin and other officials at the Shangri-La Dialogue security conference in Singapore this weekend, according to Cambodia’s Defence Ministry.

At the groundbreaking ceremony, Tea Banh thanked China and its army for “providing non-binding grants” for sand dredging and for the construction of new facilities at the base, which he said included a dry dock for repairing ships that Cambodia has not previously had.

“The Kingdom of Cambodia will not allow any foreign military base in Cambodia,” he said.

“The Kingdom of Cambodia retains the rights to receive military aid, weapons and training of the armed forces and for self-defence and to maintain social order and security. Therefore, the modernisation of Ream Naval Base is not a strange issue”.

The event was broadcast on state-friendly website Fresh News.

Chao Phirun, a senior Defence Ministry official who was last year sanctioned by the US over allegations he “conspired to profit from activities regarding the construction and upgrading of the Ream Naval Base facilities”, also spoke at the event.

He said China had provided 36,900 sets of naval uniforms and Chinese workers would also build a hospital, a slipway and a ship repair warehouse over the next two years. He also proposed that the Chinese government provide additional aid to help modernise his country’s armed forces.

Ream faces the Gulf of Thailand, adjacent to the South China Sea, where China has aggressively asserted its claim to virtually the entire strategic waterway under its so-called nine-dash line. A Chinese base in Cambodia could become a choke point in the region close to the strategically important Malacca Strait.

– with Nara Lon and AP