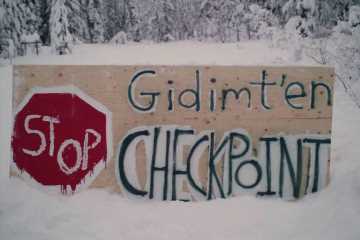 ‘No consent, no pipeline’: UBCIC President says Wet’suwet’en hereditary chiefs have been ignored

That’s Grand Chief Stewart Phillip, president of the Union of BC Indian Chiefs, speaking about the Coastal GasLink pipeline project.

According to Phillip, there’s been no real resolution reached despite Thursday’s agreement between RCMP and the Wet’suwet’en Nation at the Coastal GasLink site, and you can expect to hear more about protests in the coming year.

Phillip said detractors who claim protesters are breaking the rule of law aren’t noticing that the federal government is ignoring its own policy of First Nations consultation and consent with hereditary chiefs.

“The law clearly states that not only must there be substantial and thorough consultation, but there must also be consent. It must involve both parties, both elected and traditional,” Phillip said.

Phillip said the issue of consent is a common one along prominent “battlegrounds” in B.C., where projects are being acted on against the wishes of the First Nations who have traditionally lived on the land in question.

“Not only does that apply to the Unist’ot’en Healing Centre, but of course we know it applies to the Trans Mountain Pipeline Expansion Project as well as the ongoing battle with Site C,” Phillip said.

“Believing that 2019 will not be a battleground is a complete misread of the current reality.”

Phillip said there’s a huge difference between First Nations consultation and consent, and both the hereditary and elected chiefs need to be involved at all levels of major projects.

“The proper title holders are the people themselves. So you cannot take a shortcut and just simply engage the elected band council system and call it a day and expect to move these projects forward.”

He said the Canadian government has drawn international flak for its methods in dealing with contentious projects like the Site C dam. On Dec. 14, the United Nations sent a letter requesting Canada to suspend construction of the Site C dam until it receives “free, prior and informed consent” from the Indigenous community.

‘The law is the law,’ critics say

Not everyone agrees with the protesters’ methods. Business Council of British Columbia CEO Greg D’Avignon says the law is the law: decisions have been made by the federal government, and protesters have to accept it.

“They have a full right to protest those decisions, but it’s not in keeping with the governance, structure, and legal process that’s in Canada today,” D’Avignon said.

“Business needs the certainty of the rule of law, and that’s what we’re counting on Canada and British Columbia to uphold.”

D’Avignon said Coastal GasLink and LNG Canada went through the proper channels to build a “deep, lasting and meaningful relationship with the First Nations involved,” and to allow First Nations to benefit from the projects.

He said projects might not please everyone, but once the decision has been made, it needs to be business as usual.

“You can protest but you can’t do it in a way that is illegal or that gets in the way of the intent of the decision going forward.”

Fourteen protesters were arrested at a blockade set up by members of the Wet’suwet’en Nation on Monday.