Byron Bay residents gathered on the beach to decorate a large sand mandala with orange flowers, feathers, shells and stones to commemorate the two years since the disappearance of Belgium backpacker Theo Hayez.

As the sun set, beachgoers continued to reminisce and pray for answers about what happened to the 18-year-old. 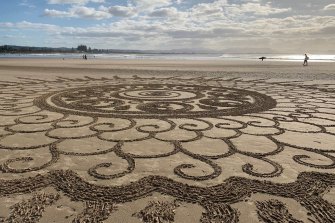 The mandala at Byron Bay to commemorate the second anniversary of the disappearance of backpacker Theo Hayez.Credit:Georgia Schefe/NBN news

Resident Miriam Healy said the disappearance of Mr Hayez was still raw and the community hoped someone would come forward with information.

“As a community, we don’t have answers and it breaks our heart. He is always in our thoughts and minds,” she said.

Mr Hayez was last spotted around 11pm on May 31, 2019 leaving the Cheeky Monkeys bar on Johnson Street. He was reported missing in early June by Byron Bay’s WakeUp! Backpacker hostel, when they noticed he had not checked out of his room.

At the time of his disappearance, he was wearing a black hooded jumper, beige pants and black shoes. 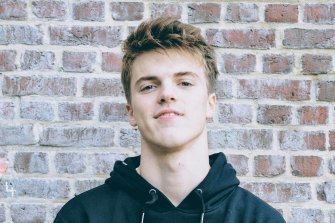 Backpacker Theo Hayez was last seen in Byron Bay in May 2019.Credit:Facebook

Ms Healy said the mandala motif had been put forward by Mr Hayez’s family who were unable to attend the memorial, while many of the decorations had been in his favourite colour – orange.

”We talked about Theo, held hands and people shared different wishes for Theo and their appreciation for each other. We shed tears, we are still heartbroken. It feels the same after two years that it did after one year, there are no answers,” she said.

Mr Hayez’s godfather Jean-Philippe Pector, who travelled from Melbourne for the event, told the ABC: “We know sometimes it can take years and years before someone decides to talk, but we believe that someone could hold some kind of information that could be the key to understanding what happened.”

Mr Hayez had been on a backpacking gap year around Australia, with Byron Bay the penultimate stop on his tour. He told his family how keen he was to come home and begin his university studies.

After several months, the police search was formally ended in September.

The Byron community was active in the search, with members of the public gathering in the area between Byron Beach and Tallow Beach near Tallows Ridge, where Mr Hayez’s phone last pinged. Despite their efforts, My Hayez has not been found.

A NSW spokesperson said detectives were still continuing their inquiries as they prepare a brief for the coroner.

“As it is now under coronial jurisdiction, it would be inappropriate for the NSW Police Force to comment,” the spokesperson said.

A hearing into Mr Hayez’s disappearance is scheduled in Byron Bay in November.