The harassment lawsuit filed against Nicki Minaj by her husband Kenneth Petty's alleged rape victim, Jennifer Hough, has been dropped, according to documents obtained by PEOPLE.

"The case against Nicki was voluntarily dismissed. The case against Kenneth Petty is still ongoing. Stay tuned!" Hough's lawyer, Tyrone Blackburn, tells PEOPLE. TMZ was first to report the news.

Now, the "Starships" rapper, 39, plans to fight for money lost in legal fees.

Minaj's lawyer, Judd Bernstein, told Hough's lawyer he was pleased that Hough and Blackburn "came to their senses," according to an email obtained by PEOPLE.

"Your conduct in pursuing this case against Nicki represents the worst of our legal system: bottom-feeding lawyers who pursue frivolous actions against a celebrity assuming that they will be paid off if they throw up enough dirt," he wrote.

Bernstein added, "It is just the beginning of Nicki's and my efforts to make you pay for your disgraceful conduct with both money and, if the Court recommends it, disciplinary sanctions."

The lawsuit, filed by Hough in August, claimed that Minaj and Petty, 43, tried to threaten her into recanting her accusation of rape — which Hough said occurred in 1994 when she was 16 years old.

Petty was convicted for the first-degree attempted rape in 1995. He was sentenced to 18 to 54 months, but spent four years in prison.

Hough's lawsuit also accused the couple of intentional infliction of emotional distress and alleged sexual assault and battery, referring to the 1994 incident.

"As a direct result of the actions of Defendant Minaj and Defendant Petty, Plaintiff has been traumatized her entire life," the lawsuit read. "Plaintiff has never felt safe since being raped by Defendant."

The lawsuit also said that Hough was offered $20,000 once in exchange for signing a prepared statement that would recant her rape accusation. It also alleged that Minaj called her to speak about recanting her story and that she received numerous harassing calls and visits from people associated with the couple. (It also detailed how Hough's brother was offered half a million dollars by associates of the rapper and her husband in exchange for her recantation.)

One month after filing suit, Hough appeared on The Real and recounted the day she was allegedly raped by Petty, describing the fear she has experienced ever since he married the "Super Bass" rapper. 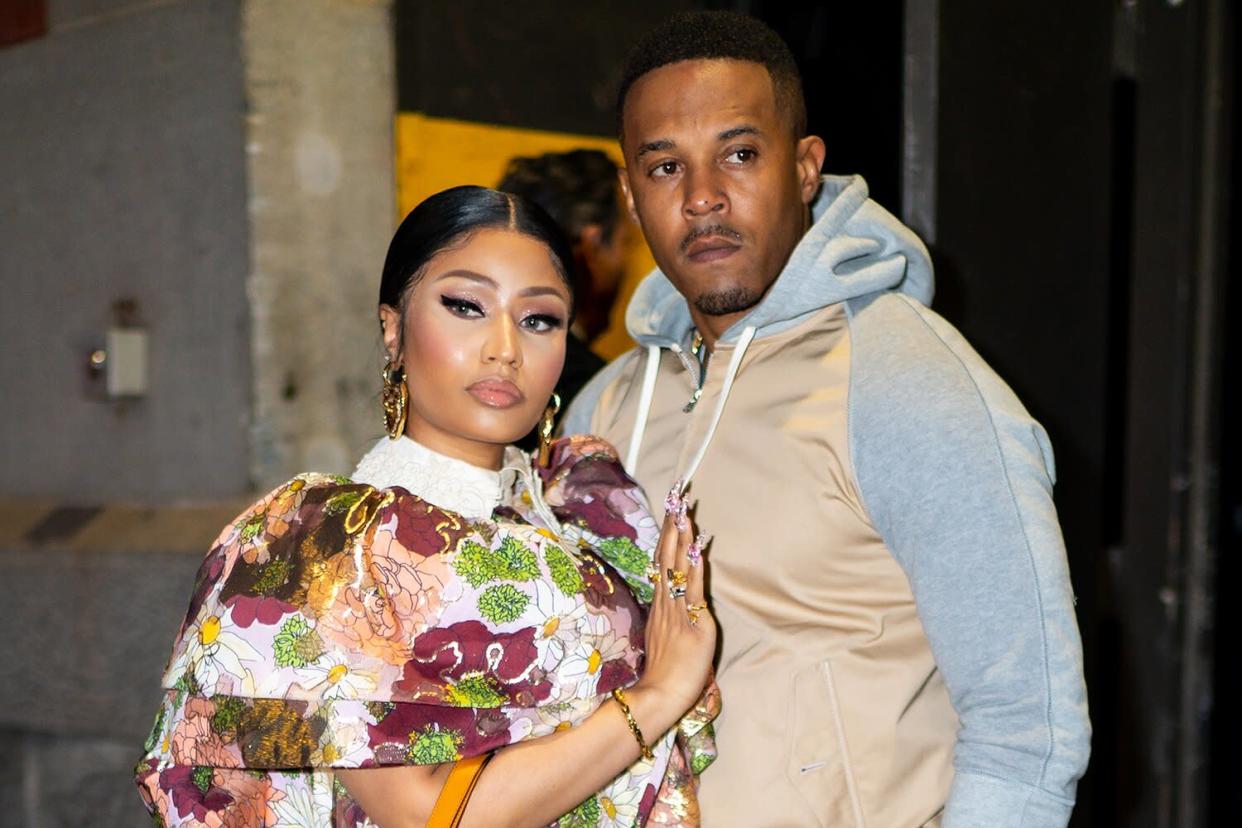 "I felt like the actions that were taken in regards to this whole situation, have put me in a different type of fear at my age now," Hough said. "It was wrong. And I don't want to be afraid anymore, so the only way not to be afraid is to continue to speak up."

As for what she hoped would come from her lawsuit, which asked for $500,000, Hough said she wanted the Pettys to know that "they were wrong" and that "you can't do this to people."

"He did something a long time ago and he had consequences that he was supposed to stick with. What they did to me and my family wasn't OK," she said. "It wasn't right and it doesn't matter how much money you have. It doesn't matter what your status is, you can't intimidate people to make things go better for you. And that's what they did."

As she wiped away tears, Hough told the story of the day Petty allegedly led her to a house and raped her.

"Before you know it, he was grabbing a hold of my jacket," she said. "I felt something in my back so I just assumed there was a gun. And I started walking. And I'm pleading with him the whole way, trying to understand what he wants."

Hough said they walked up the steps of a house and Petty allegedly told her she "knew what he wanted" as she attempted to fight back.

"All I could do was hold my pants as tight as I can," she said. "I didn't know why it didn't dawn on me to like really fight. I just held on to my pants and he held my arms down and squeezed the sides of my stomach so hard. I let go and as soon as I let go he grabbed my pants. It was like a tug of war and after a while I just got tired."

After he allegedly raped her, "he stood in the mirror and beat his chest. He said, 'I am the man. I'm the man,'" she said as she wiped away tears.

Hough found a way to escape and ran to school where she informed a security guard of what had allegedly happened. The school then called the police and he was taken out of the home in handcuffs and she was transported to the hospital.

Addressing comments from Petty's family that the two were in a relationship at the time, Hough said, "We were never in a relationship. Ever. We never had no type of romantic anything. We never talked on the phone. We never hung out together. I just knew him from the neighborhood."

Never miss a story — sign up forPEOPLE's free weekly newsletter to get the biggest news of the week delivered to your inbox every Friday.

Petty is a level two registered offender in New York, which means he's considered a "moderate risk of repeat offense."

Petty was arrested in March 2020 after being indicted for failure to register as a sex offender in California. At the time, Petty pleaded not guilty and posted $100,000 bail, according to records accessed by PEOPLE.

In September, PEOPLE confirmed he pleaded guilty during a virtual hearing. He now faces a maximum sentence of 10 years in prison and a lifetime of supervised release.

If you or someone you know has been sexually assaulted, please contact the National Sexual Assault Hotline at 1-800-656-HOPE (4673) or go to rainn.org.

‘CODA’ Challenged Star Emilia Jones at Every Turn, but It Also Gave Her a Once-in-a-Lifetime Breakout Role

Quarantine hotels to be used for COVID-19 patients
World News