The Big Easy is BACK! New Orleans enjoys its first parade since COVID ravaged the city in spring 2020, with one excited local branding the Halloween-themed party ‘Better than Christmas’

The high school bands played, the marching groups danced and float riders threw Moon Pies and beads to the thousands of people who turned out for the Krewe of Boo on Saturday – New Orleans’ first big parade since the onslaught of the coronavirus pandemic.

The Halloween celebration started in 2007 as a Hurricane Katrina fundraiser, but it’s taken on a new significance after COVID-19 brought the party city to a halt last year.

Experts estimate that last year’s Mardi Gras celebration, which happened before COVID-19 was declared a pandemic, may have contributed to 50,000 infections in Louisiana’s first wave.

On Friday, Mayor LaToya Cantrell signaled that Mardi Gras will go on as planned next year barring a ‘dramatic turn for the worse.’

‘It’s better than Christmas,’ said Lacey Sanders, a member of the Pussyfooters marching club, on Saturday. ‘I have been waiting for this since April of 2020.’

After over a year in which the coronavirus largely put an end to parades, the streets were lined with thousands of residents and tourists who came to watch the Krewe of Boo parade. 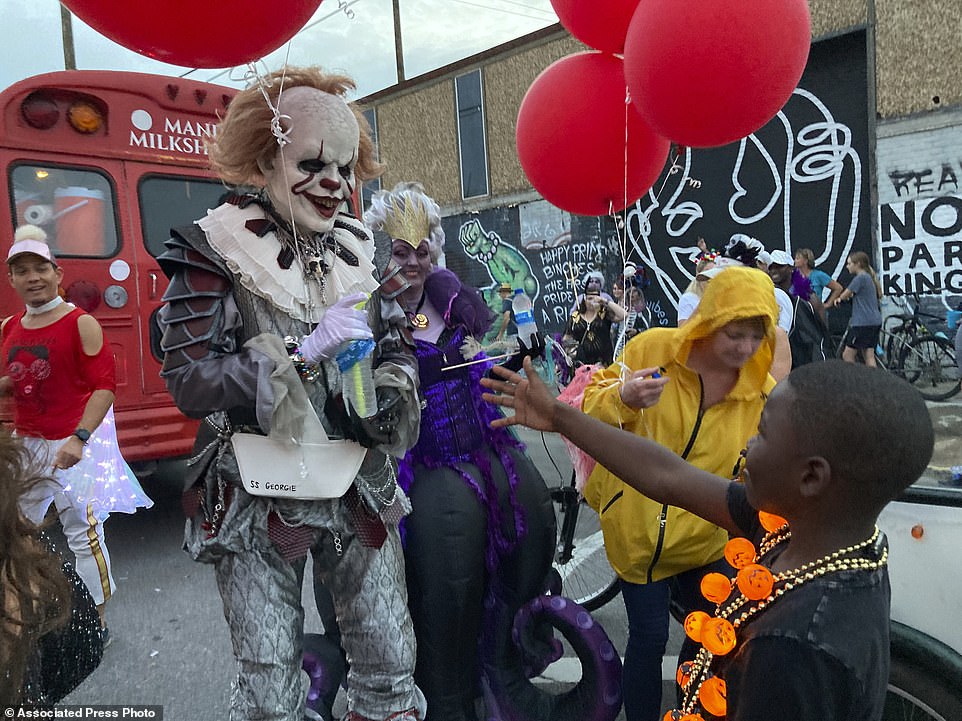 A costumed man greets a young boy at the Krewe of Boo parade in New Orleans on Saturday. It was the first big parade since Mardi Gras in February 2020 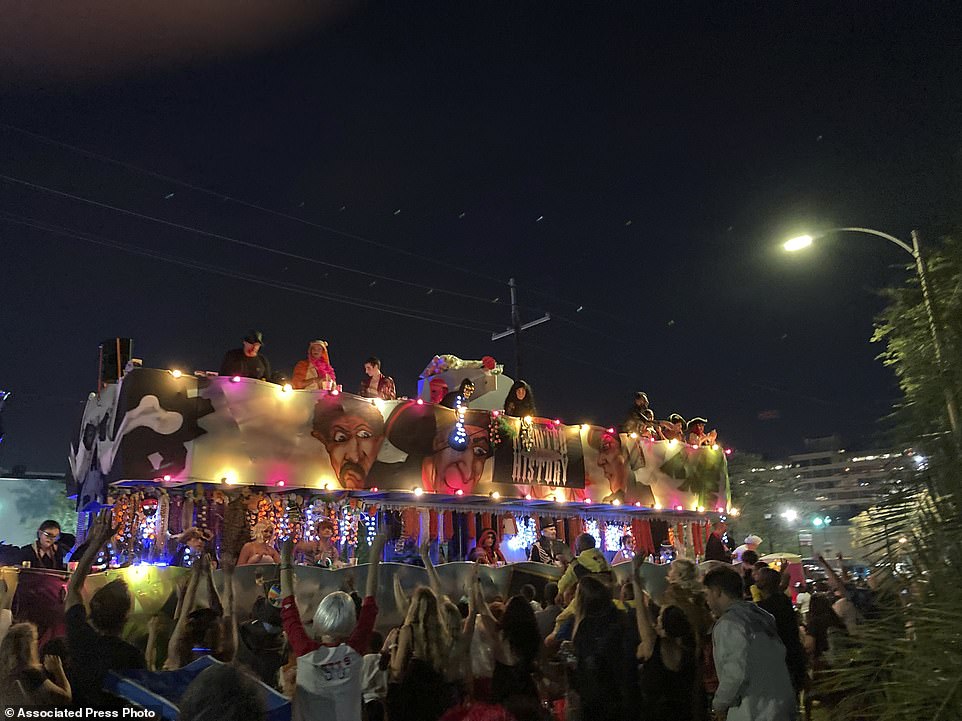 A float rolls down the street during the Krewe of Boo parade, which started out as a fundraiser for Hurricane Katrina in 2007 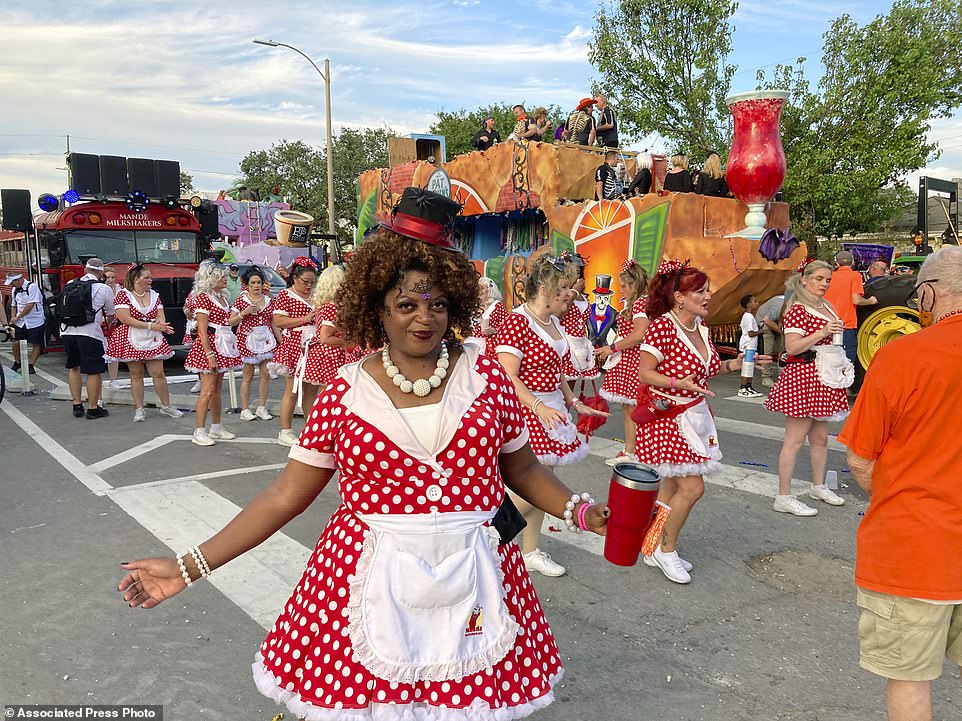 Members of the Mande Milkshakes dance at the parade. ‘It’s better than Christmas,’ said the member of one marching club 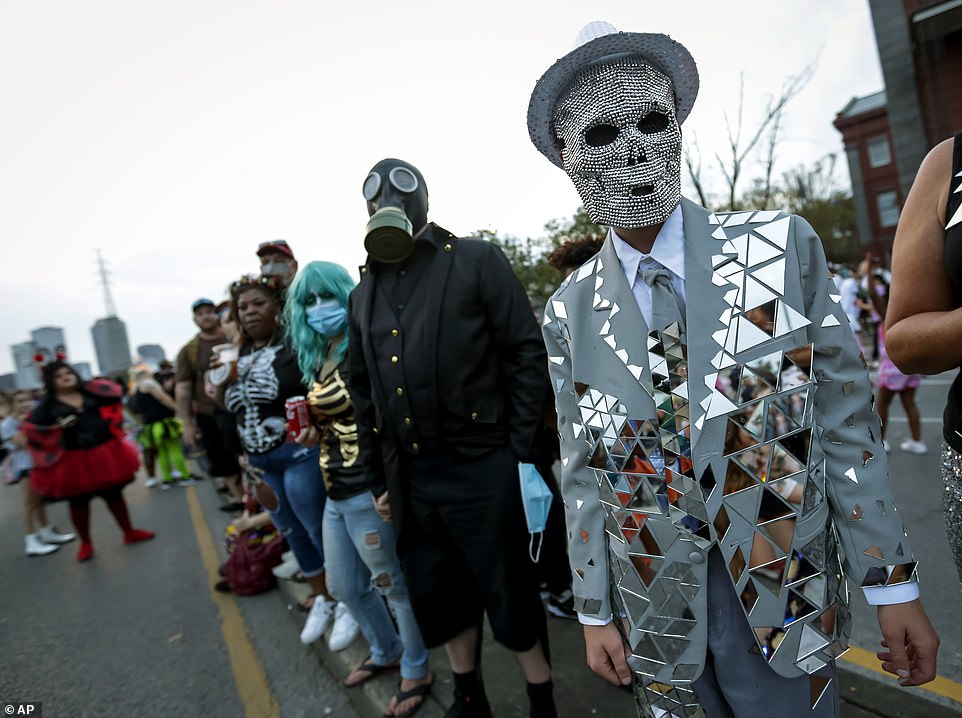 Krewe of Boo stretches from the city’s Marigny neighborhood, through the French Quarter and into the Warehouse District

Krewe of Boo stretches from the city’s Marigny neighborhood, through the French Quarter and into the Warehouse District.

Riders on the floats dress up in Halloween-themed outfits and throw ghoulish and fun trinkets and beads to crowds that pack the streets.

‘I think everybody’s ready to get back to normal life. So why not? Why Not?’ Pussyfooters member Tawanda Carter told local station WDSU.

Video from WGNO shows crowds in sequined or glittery costumes lining the streets. Parents held costumed children on their shoulders. Members of the Rolling Elvi – an Elvis tribute group that rides scooters – took photos with each other.

Students from the Lafayette Academy marching band warmed up while girls in a dance troupe practiced their moves.

All would have been common sites during a regular year, but many were cognizant of how long it’s been since the city has seen such an event.

‘This is one of the best feelings in a very long time. It’s so lovely,’ said Jordan Philebar, a New Orleans resident who was dressed as Wednesday Addams from The Addams Family as she rode a float along with four members of her family.

Mardi Gras 2020, held on February 25, was credited with contributing to the city becoming an early hot spot for the coronavirus. It was the last major parade in New Orleans before Saturday. 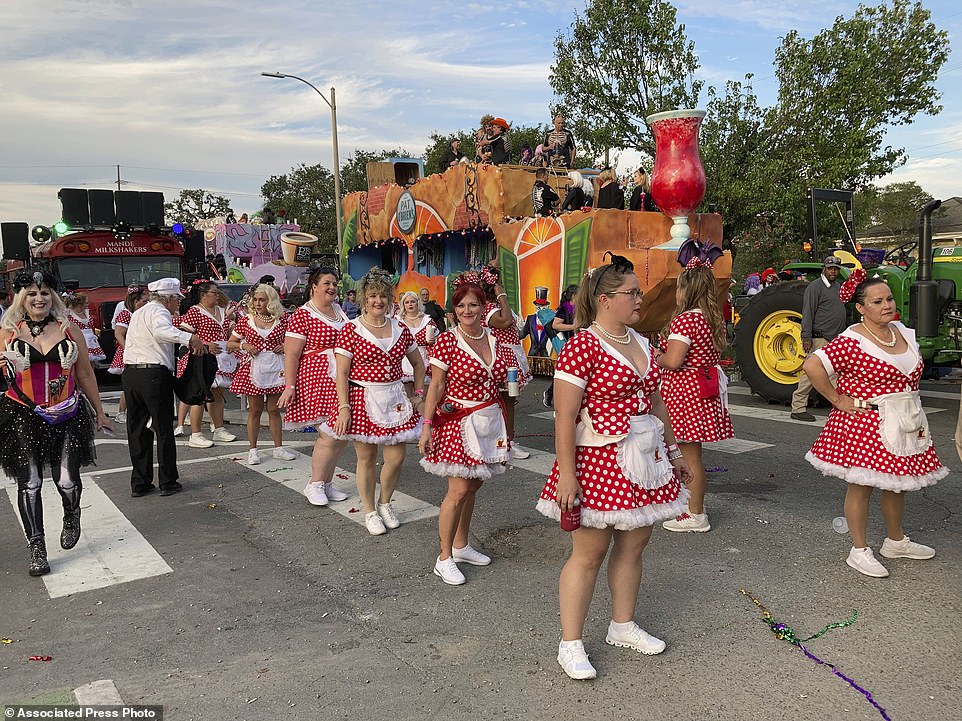 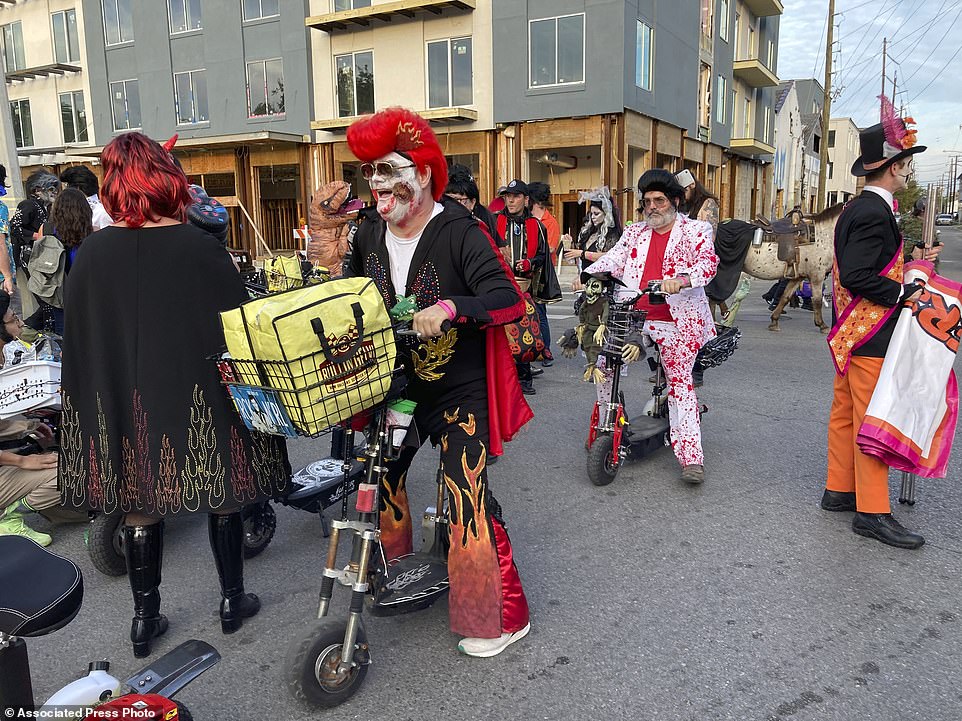 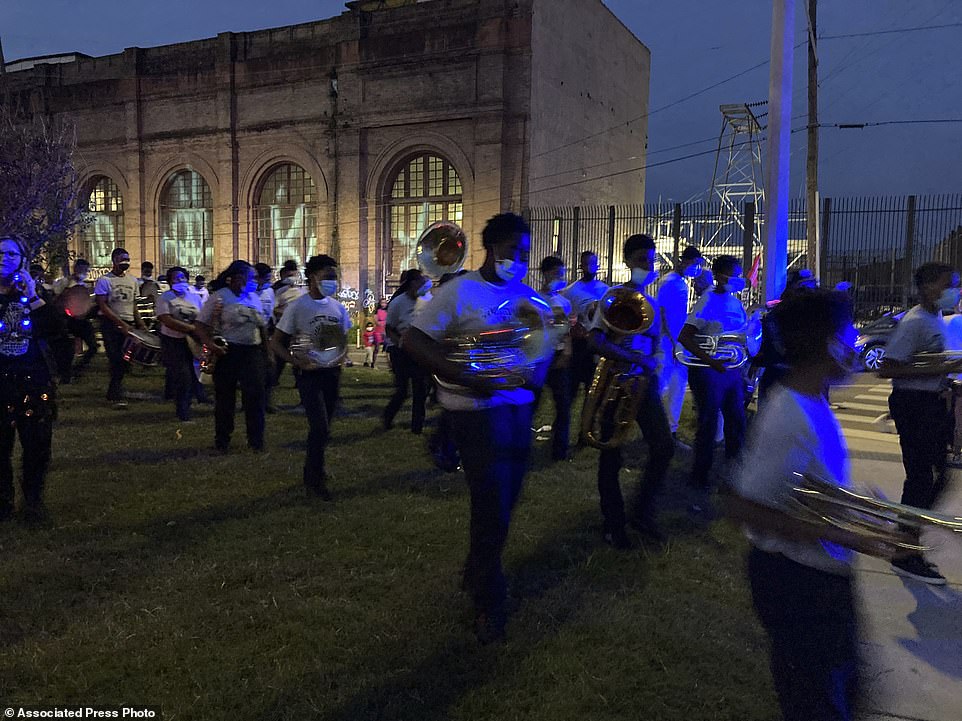 Members of the Lafayette Academy band march in the parade. ‘It’s lovely to feel slightly normal again,’ one person said 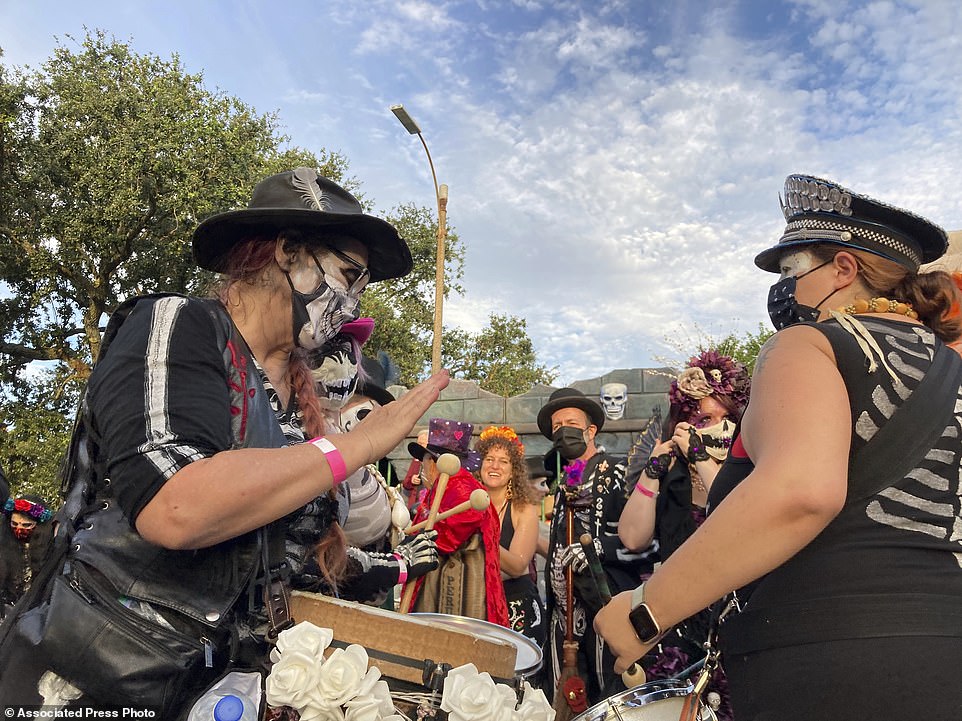 Louisiana’s COVID-19 cases grew 67.8 percent in the first two weeks after the initial diagnosis on March 9, according to The Advocate.

It outpaced New York, which saw cases grow by 66.1 percent after getting its first diagnosis, according to data from the University of Louisiana at Lafayette.

Researchers also calculated that the parade likely yielded 800 infections that contributed to the 50,000 confirmed cases in Louisiana’s first wave, according to The Times-Picayune.

As the extent and seriousness of the pandemic became apparent, parades and music festivals were canceled.

If the city can pull off the Halloween-themed Krewe of Boo parade safely, without a resulting uptick in COVID-19 infections, it will bolster Mayor Cantrell’s tentative plans toward bringing back the lavish Mardi Gras processions that fill city streets during the annual pre-Lenten celebration.

‘This is a step towards the return of Mardi Gras next spring,’ Cantrell tweeted after announcing in September that the Krewe of Boo parade could proceed.

‘What happens next depends on what we do right now!!’ 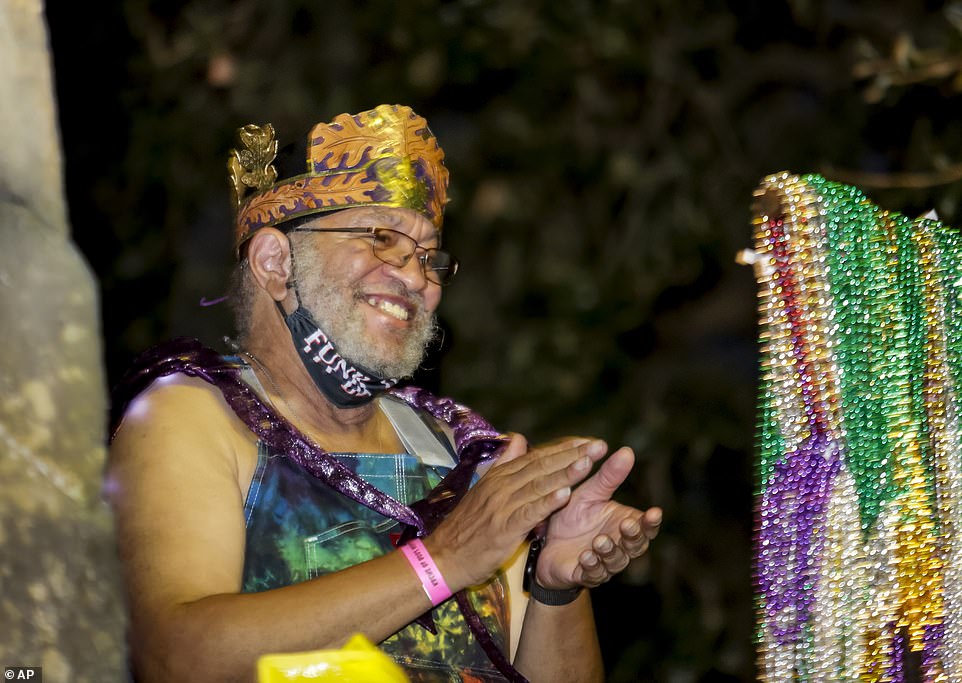 George Porter Jr., 73, of the local funk band The Meters reigns as king during the Krewe of Boo parade on Saturday 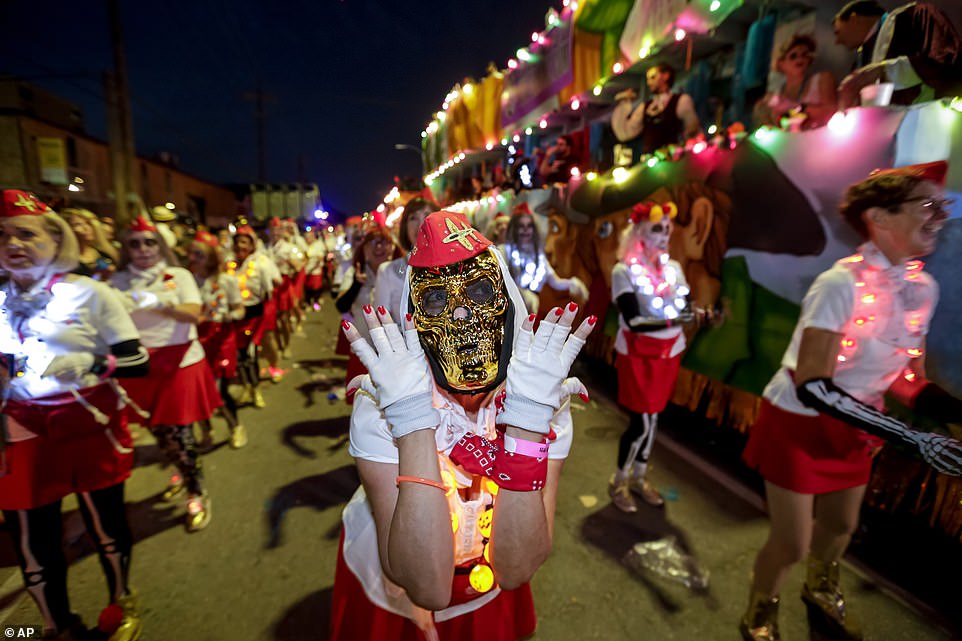 Witches, goblins and masked creatures took to the streets Saturday night in the city’s first large float parade since COVID-19 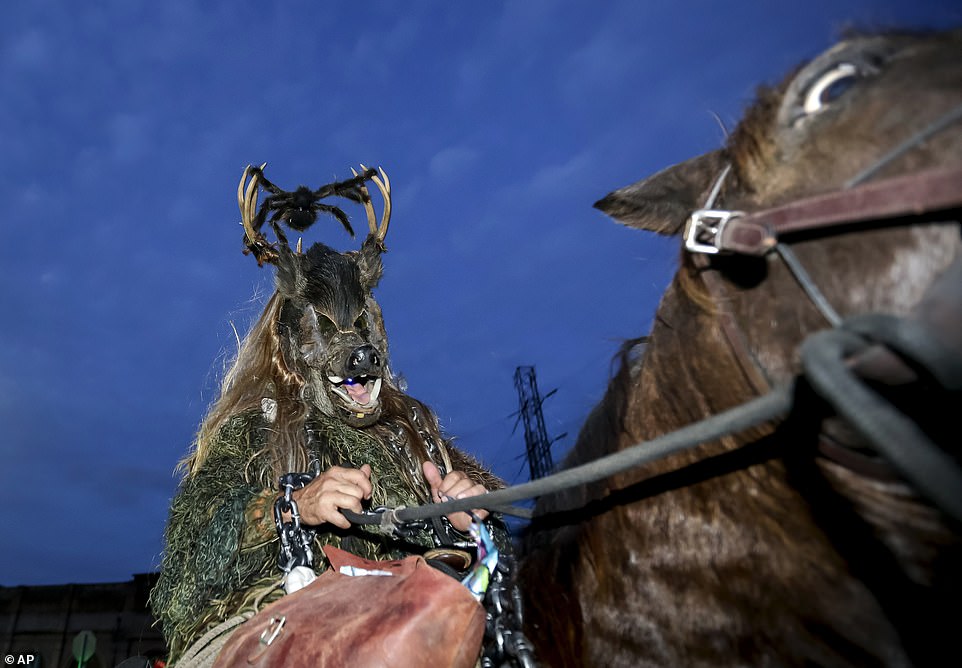 ‘We miss it. Us locals, we miss it very much, and we’re just glad to be back,’ one attendee said

On Friday, the mayor said that Mardi Gras will go on next year unless there is a ‘dramatic turn for the worse in our COVID numbers’ – her strongest comments yet that the massive parades that accompany the yearly celebration would roll again.

New Orleans resident Melanie Smith walked with her granddaughter along Elysian Fields Avenue on Saturday, taking photos of especially good costumes, and participating in something she hadn’t been able to do for over a year.

‘We miss it. Us locals, we miss it very much, and we’re just glad to be back,’ she said.

She hopes that with the city’s vaccination numbers continuing to rise the parade wouldn’t result in more coronavirus cases.

In New Orleans, 60 percent of the city’s total population is vaccinated, according to city data. 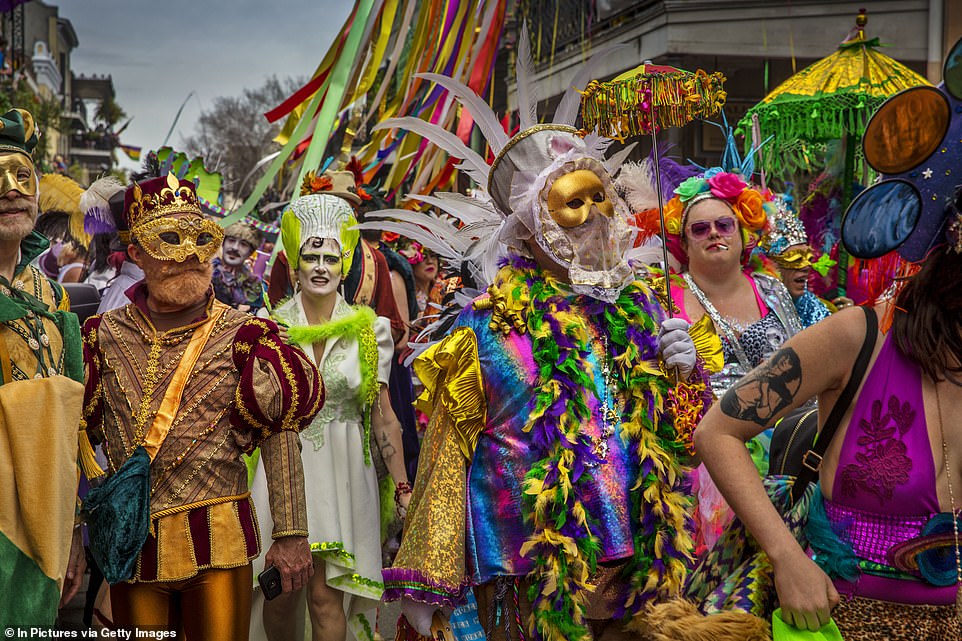 Mardi Gras 2020, held on February 25, likely yielded 800 infections that contributed to the 50,000 confirmed cases in Louisiana’s first wave, according to researchers. Above, the Society of Saint Anne at last year’s Mardi Gras celebration 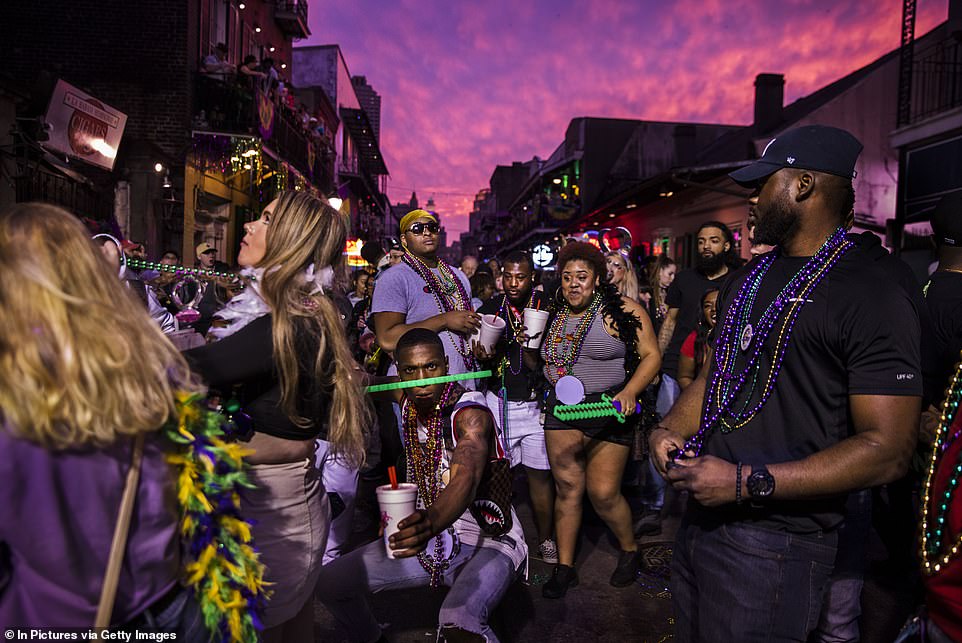 Louisiana’s COVID-19 cases grew 67.8 percent in the first two weeks after the initial diagnosis on March 9. Mardi Gras 2020, above, was held days earlier on February 25

About 47.3 percent of the population of Louisiana is fully vaccinated, according to the CDC, below the national average of 57.4 percent.

The state had 681 new cases on Sunday, and 83 percent of COVID cases from October 7 to 13 were among the unvaccinated.

As part of Saturday’s safety measures for Krewe of Boo, riders and marching group members had to be vaccinated, or show proof of a negative COVID-19 test.

Health officials were out conducting a study during the parade to better understand coronavirus spread in large gatherings.

About 40 health employees and volunteers were slated to be at the parade route to assist people in taking the survey and handing out goody-bags to those who take part.

In keeping with the Halloween theme, the 40 dressed up as Dr. Anthony Fauci, the White House adviser and face of the federal pandemic response.

Louisiana has the fourth highest death rate of any state in the US per 100,000 people, according to data hosted on Statista. It comes behind Alabama, New Jersey and Mississippi, the state with the highest rate. 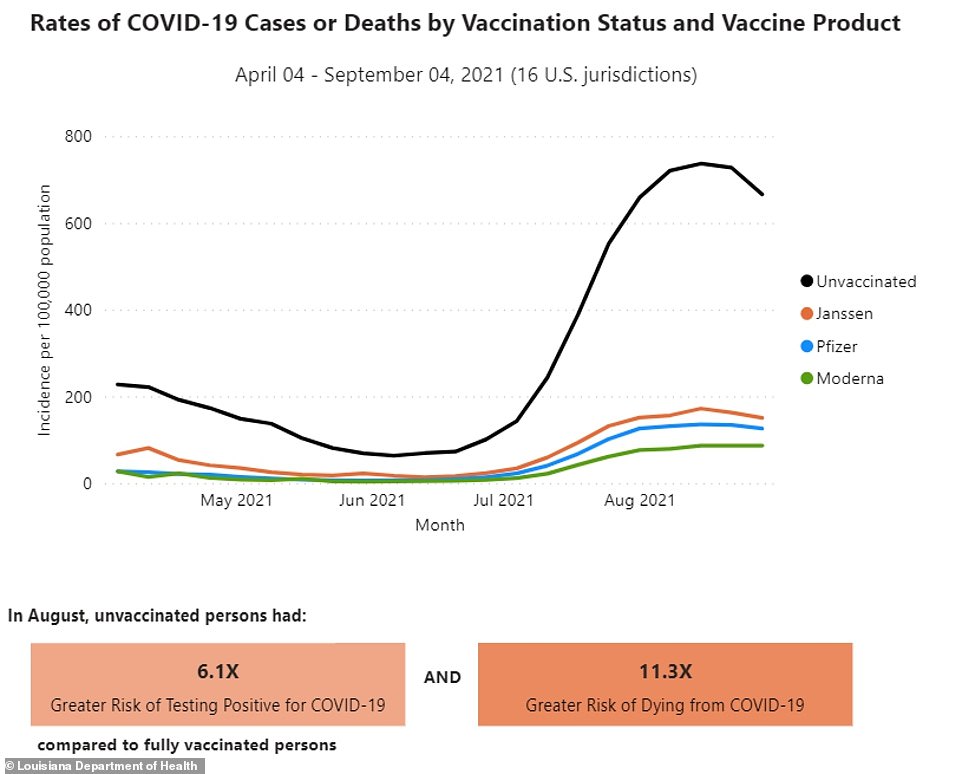 Louisiana had 681 new cases on Sunday, and 83 percent of COVID cases from October 7 to 13 were among the unvaccinated 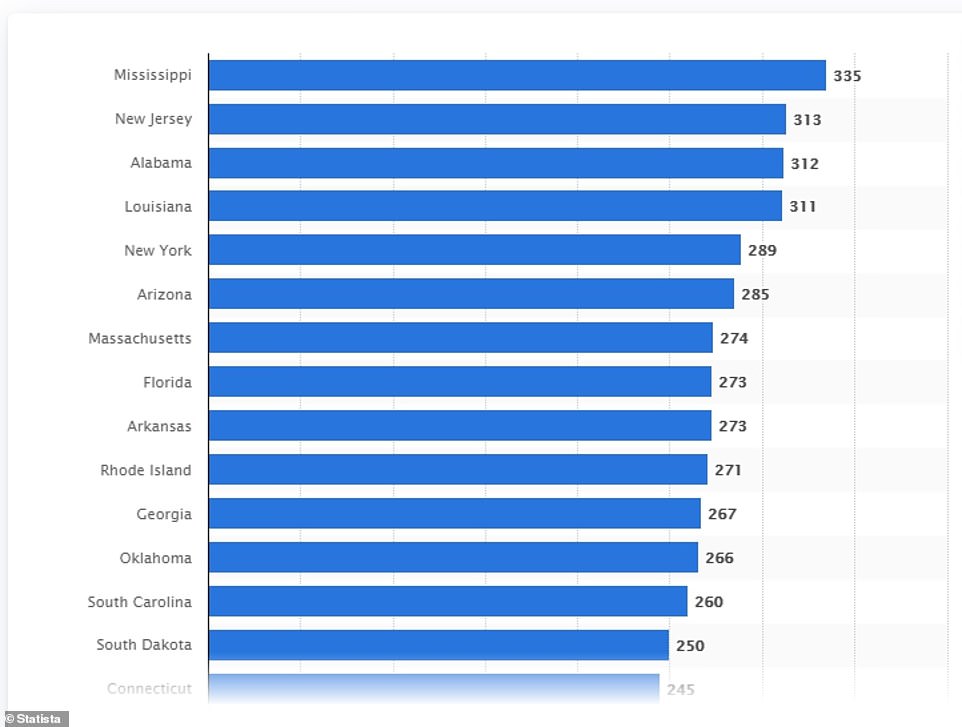 Louisiana has the fourth highest death rate of any state in the US, behind Alabama, New Jersey and Mississippi

Krewe of Boo was scrapped last year and this year’s Mardi Gras was a subdued affair without parades and a largely vacant French Quarter.

As vaccinations became more widespread and infections dropped, the city began loosening restrictions that had limited capacity at restaurants or music venues. In one of the last stages of loosening restrictions, officials announced in May that they would start to accept applications for parades and the smaller processions called second-line parades.

The rise of the Delta variant, which filled hospitals across the state over the summer, called into question the viability of parades.

But in September, Cantrell announced Krewe of Boo would be allowed to parade. She credited work residents had done to slow the delta variant’s spread.

New Orleans resident Stephen Hawkins watched the parade with his family although as a longtime member of the Krewe de Lune, he knows what its like to parade as well.

He said the krewe’s dancers practiced throughout the pandemic – outside and socially distanced – but with no one to perform for. Now their time was here.

He said everyone in their krewe was vaccinated but that it’s impossible to say the same for the throngs of people crowded along the parade route. He said he hoped Saturday would lay the groundwork for Mardi Gras next year.

How old are Reese Witherspoon's kids?