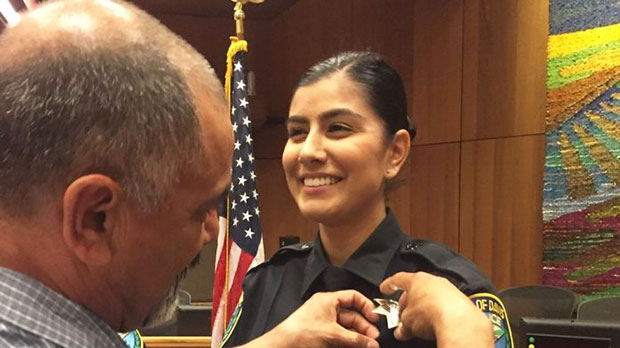 Natalie Corona: 5 Things About Cop, 22, Killed By An Armed Suspect While Investigating A Crash

A rookie cop, Natalie Corona, was shot dead at the scene of a car accident in Sacramento, California on Jan. 10. Here’s everything to know about the situation.

Natalie Corona, 22, was fatally shot when she responded to a three car accident in Davis, California on Jan. 10. Police received a call about the crash just before 7:00 p.m., and Natalie reported to the scene alone. She was shot by a suspect at the scene of the crash, and rushed to UC Davis Medical Center in Sacramento, but sadly, she was pronounced dead later that evening. “She was a rising star in the department,” Chief Darren Pytel said. “She just worked like you can’t believe.” Here’s more to know about Natalie and this tragedy:

1. She had just recently joined the force when she was killed. Natalie got her start in the Sacramento Police Department as a community service officer in 2016. Even when funding for that position was ended, she continued to work the job as a volunteer, then went onto graduate from the Sacramento Police Department’s training academy in July 2018. After that, she did her field training, which was completed just before Christmas. Natalie had only been a police officer for two weeks when she was tragically shot dead.

2. Being a cop runs in her family. Natalie’s ather, Merced Corona, worked in law enforcement for 26 years. He was a Colussa County Sheriff’s deputy during his long career on the force.

3. She left her mark on the police department. Even though Natalie was only on the force for a short time at the time of her death, her impact on the Sacramento Police Department is quite evident. “I haven’t seen anybody work harder in a part-time capacity and be more motivated to be a police officer than Natalie,” Pytel added. “She was just an absolute star in the department and someone that pretty much every department member looked to as a close friend, a sister.”

4. She was vocal about her reason for wanting to become a cop. Natalie previously wrote on her Facebook page that she wanted to become a police officer to “serve as my gratitude or all those law enforcement men and women who have served, who are currently serving and those who have died in the line of duty protecting our liberties in this great country.”

4. The person who shot her is also dead. After Natalie was shot, police swarmed the scene and surrounded a home where they believed the suspect to be hiding. They spent hours trying to get the suspect to come out of the home, and even sent a robot inside to coax him out. When they finally went inside the home around 1:30 a.m., they found the suspect dead of an apparent gunshot wound. He has not been identified, but police confirmed that he is a “white male in his 20s, average build, baseball cap, black jacket, blue or tan jeans, black tactical boots.”