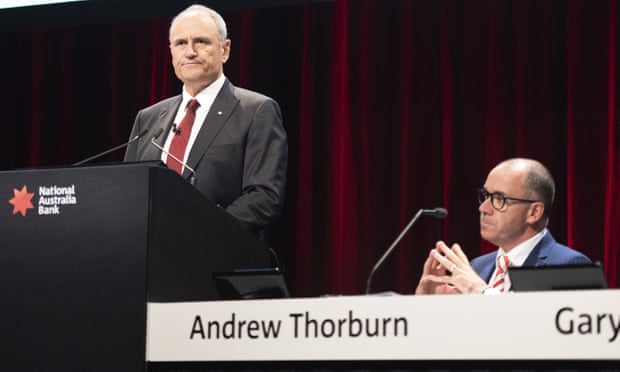 The National Australia Bank has faced a revolt from angry shareholders over executive pay with a record protest vote at its annual general meeting.

The bank announced it is scrapping its new executive pay scheme after more than 85% of shareholders voted against it.

The first strike was the largest protest vote in Australian corporate history against management over pay at a blue-chip company. NAB will now be at risk of a second strike and a board spill next year.

ANZ also faced a shareholder revolt at its Perth annual general meeting on Wednesday and Westpac was hit with a first strike last week.

NAB shareholders are angry over the bank’s falling share prices, a dividend that has not been raised since 2013 and allegations of misconduct.

The NAB chairman, Ken Henry, said the bank understood shareholders wanted rewards aligned with performance and for senior executives to be accountable.

“The board is hearing loud and clear that our new scheme is not right,” Henry told shareholders. “We tried, but we got it wrong.”

Henry said he was appalled by some evidence that had come out at the royal commission and apologised for poor customer service.

Shareholder Chris Schott characterised the board and senior managers as “failed capitalists”. “You have destroyed billions and billions of shareholder value,” he said. “You are the unacceptable face of capitalism.”

He said there had to be changes to the board and it could not pretend everything was “hunky dory”.

Schott said bonuses had created a culture of “unconscionable greed” across the financial system and he disputed the need to pay them in order to attract the best talent. “We’ve had all of that and what have we got? A scandal-ridden financial system,” Schott said.

Henry disagreed, saying the bank had to compete in the “global talent market” and argued the board and executive should remain in place.

A taxi driver and shareholder named John Scott said the bank’s boss didn’t deserve a bonus. “I don’t think a man who earns [more than] $1,000 an hour deserves a bonus,” he said as other shareholders applauded.

Thorburn said the bank had lost customers’ trust. “We haven’t got it right for all our customers, all of the time,” he said. 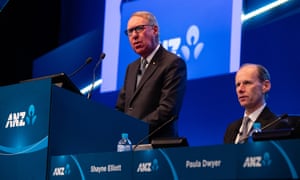 The ANZ chairman, David Gonski, also offered a mea culpa to shareholders. “It is not adequate to simply blame our failures on the complexities of being a large organisation, or on our systems and processes,” he said.

“In the past we were at times too focused on the short-term profit of the group, rather than the long-term sustainability of our relationships and our obligations to all our stakeholders.”

The bank also faced a first strike against its remuneration report with 34% of early votes against.

His performance-related remuneration was cut 23% to $3.15m, reducing his overall package to $5.25m from $6.2m in 2017, but shareholders apparently did not feel this went far enough.

ANZ also faced scrutiny of its human rights record and the failure to compensate Cambodian farmers forced off land to make way for a sugar plantation.

The bank granted a $40m loan to Phnom Penh Sugar in 2011, which resulted in the displacement of hundreds of farming families. ANZ has handballed responsibility for compensation to the Cambodian government.

“We call on ANZ to immediately divest the profit from its loan to Phnom Penh Sugar to help address the harm caused to these families,” Human Rights Law Centre spokeswoman Keren Adams said.