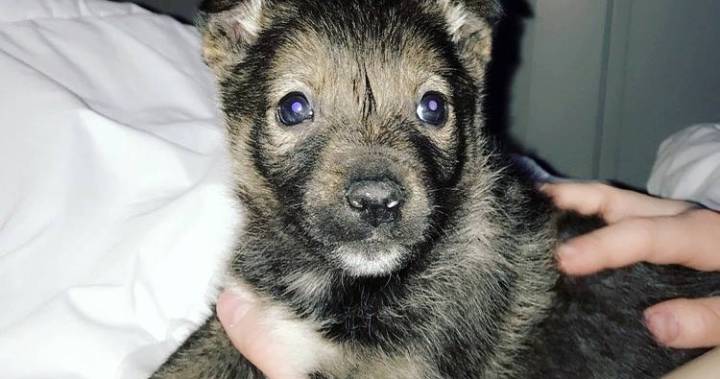 Madi Jopling told 680 CJOB she came home Monday to find a box outside her house, containing a tiny, shivering puppy wrapped in a jacket.

The identity of the person or people who dropped him off remains a mystery.

“My family fosters dogs, so we do have a couple of dogs at a time at our house,” Jopling said.

“I think the people who left this puppy knew that we have dogs, but that doesn’t make it right.”

Jopling said the puppy – a Husky cross around a month old who has since been named Oliver – appears to be in good health, all things considered.

“He was definitely cold, but other than that, he’s pretty good. He’s healthy. He doesn’t seem like he’s sick or that there’s anything wrong with him.

“It could have ended badly for this little guy. Luckily I came home when I did.”

Little Oliver is headed to the vet Thursday to make sure he’s as healthy as he seems, and after that, he’ll be in foster care via Earthdog Terrier Rescue of Manitoba.

“Either my family or another foster in our rescue will take him in until he’s old enough to actually be adopted out, which should be another month or so.”

Jopling said there’s no reason anyone should have to take the route Oliver’s previous owner did, and put a pet’s life at risk by anonymously dropping it off somewhere.

“There’s so many better options,” she said. “There’s the Humane Society, obviously, but there’s also other rescues. There’s so many that can help you.”

On its website the Winnipeg Humane Society describes surrendering a pet as a ‘last resort’, but has a process in place – including an interview with an advisor – to help pet owners ensure their pets will be safely adopted into a new home.

They also provide a list of local rescues for both dogs and cats, covering dozens of organizations across Manitoba.

Nighttime podcast recap: The story of Lindsay Souvannarath — an introduction