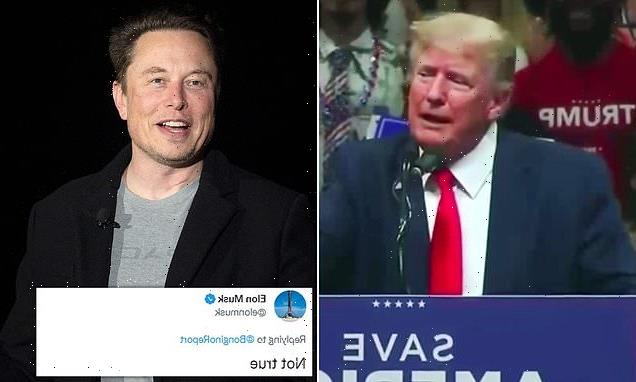 ‘Not true’: Elon Musk hits back at Trump over the former president’s claim that the Tesla CEO voted for him in the last election as their war of words continues

Elon Musk’s much-talked-about tiff with Donald Trump continued in full force this week – with the Tesla CEO this time taking to Twitter to question the ex-president’s credibility and brain capacity.

The online barrage from Musk – who pulled out of $44b deal to buy the social media platform last week – saw the outspoken mogul slam Trump as a liar, and ‘too old’ to run for president.

The claims came in response to a recent appearance by the politician – who has repeatedly hinted at a second presidential run in 2024 – that saw him mock Musk by calling him a ‘Bull***t artist.’

The insult followed a claim from Trump that Musk lied about voting for him during his ill-fated presidential run in 2020.

The accusation referred a Tweet from Musk last month, which saw the South African businessman brag about voting for a Republican for the first time, casting a ballot for new Texas Congresswoman Maya Flores.

Trump seemingly took issue with the endorsement, and accused Musk of lying about his political allegiance at the Alaska event Saturday.

Scroll down for video: 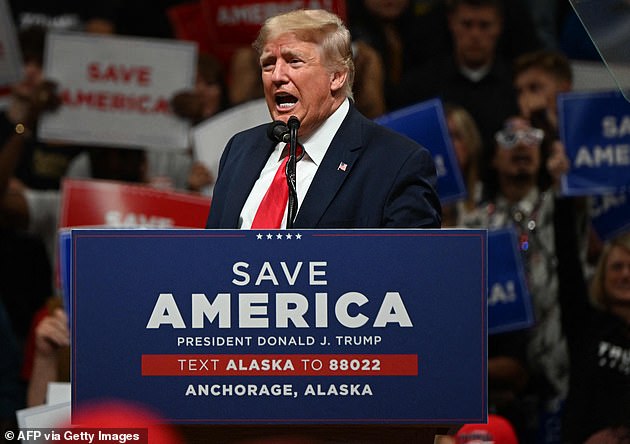 The claims came in response to a recent appearance by Donald Trump in Anchorage, Alaska, Saturday, that saw him mock Musk by calling him a bBull***t artist’

‘You know he said the other day, “Oh, I’ve never voted for a Republican.” I said, “I didn’t know that. He told me he voted for me,” Trump, 76, said at his Alaska rally when speaking about Musk’s Twitter deal falling through.

‘So he’s another bulls*** artist,’ the former president added.

Musk promptly replied to a post that shared the clip – along with an article titled ‘Donald Trump: Elon Musk Told Me He Voted for Me’ – to make his own bulls**t call on the president’s claim.

‘Not true,’ Musk wrote, in an uncharacteristically succinct clap-back. 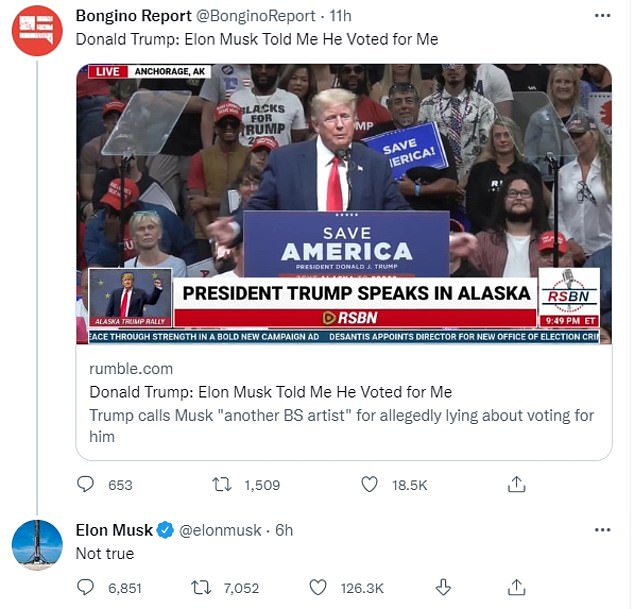 The SpaceX CEO proceeded to further pan the politician, saying he should ‘hang up his hat’ and call it quits on his political career, due to his advanced age.

‘I don’t hate the man, but it’s time for Trump to hang up his hat & sail into the sunset,’ Musk, 51, wrote to his more than 100million followers.

‘Dems should also call off the attack,’ he went on to add, referring to the currently ongoing public hearings into the Jan 6 riots by a violent mob of Trump’s supporters – an occurrence the left has been trying to pin on the former president.

‘Don’t make it so that Trump’s only way to survive is to regain the Presidency,’ Musk warned.

When one Twitter user questioned which of Trump’s policies Musk took issue with, the mogul instead pointed to the politico’s notorious no-nonsense – and at points plain brazen – approach to politics, which he said causes ‘too much drama.’ 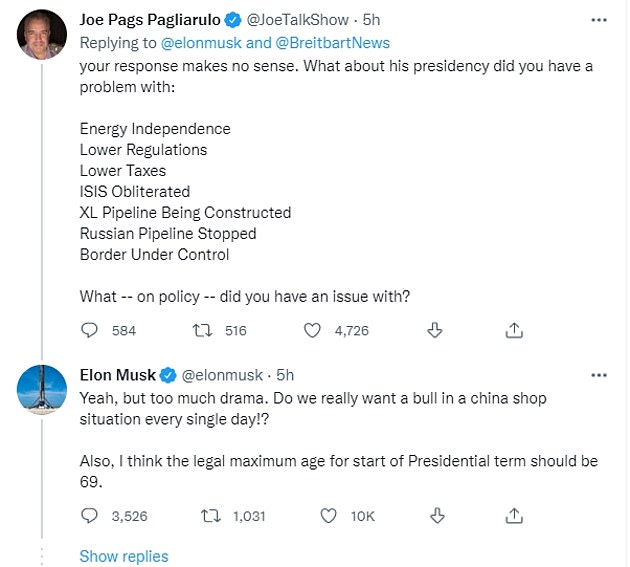 The world’s richest man replied to several tweets on the topic, saying Trump’s presidency had ‘too much drama’ and was akin to a ‘bull in a china shop’

‘Yeah, but too much drama,’ Musk wrote in response to the user’s query. ‘Do we really want a bull in a china shop situation every single day!?’

Musk then circled back to the topic of the president’s age.

‘Also, I think the legal maximum age for start of Presidential term should be 69,’ Musk wrote, before elaborating on the issue.

‘Trump would be 82 at end of term, which is too old to be chief executive of anything, let alone the United States of America.’

He added: ‘If DeSantis runs against Biden in 2024, then DeSantis will easily win – he doesn’t even need to campaign.’

The slew of posts also saw Musk agree with another Twitter user that the world has a ‘serious issue with gerontocracy’ – meaning the government is controlled by old people. 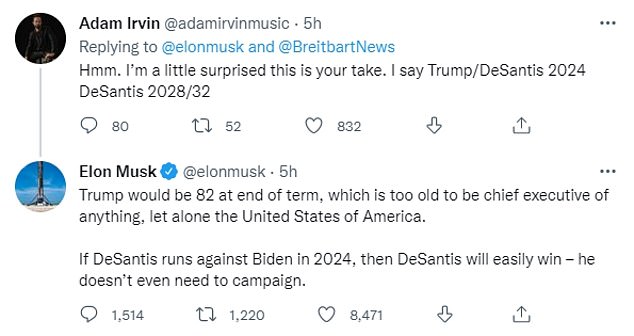 The South African billionaire was critical of presidents being to old, saying Trump at 82 would be ‘too old to be chief executive of anything’

Musk, who now lives in Texas, said that he voted Republican for the first time in June’s special election when he cast his ballot for Flores in her bid for the 34th congressional seat against Democrat Dan Sanchez.

When a Twitter account called Tesla Owners Silicon Valley asked Musk if he was voting Republican in the 2024 presidential election, the Tesla CEO replied ‘tbd.’

Trump has yet to respond to Musk’s comments.

Who is Sir Mo Farah’s wife Tania and how many children do couple have? – The Sun | The Sun