‘Mum or Dad won’t be there’: Teens tell of hurt over mother’s stabbing death

WARNING: Aboriginal and Torres Strait Islander readers are warned that the following story contains an image of a deceased person.

Three teenagers who tried to shield their mother from being stabbed by their father have told a court of the hurt and sadness her death had caused and the daily struggles they endure.

Noeline Dalzell and her children were cornered in a bedroom of their home in Seaford, in Melbourne’s south-east, on the afternoon of February 4, 2020, when James Fairhall reached over his children and stabbed his ex-partner in the neck with a kitchen knife. 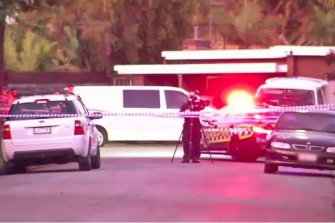 Police at the scene after the stabbing in Seaford in February 2020.Credit:Nine News

As Zachary, then aged 15, tackled his father to the floor, Ms Dalzell made it out of the house and into the street to raise the alarm. The 49-year-old collapsed and died shortly afterwards.

Fairhall was in December found guilty of murder after his trial heard he held the knife to his former partner’s throat during a drunken and jealous rage while they were on a couch in the lounge. Days earlier he had learned his former partner wanted to start a relationship with another man.

When Ms Dalzell pulled away on the couch, Zachary and sister Paige, then aged 16, ushered her into the boy’s bedroom. Despite the children screaming at their father to leave their mother alone, Fairhall entered the bedroom and inflicted a fatal wound.

Fairhall, 47, watched on a video link from prison as prosecutor Jane Warren read to the Supreme Court the victim impact statements made by his children, each of whom spoke of their constant sadness, frustration and hurt. 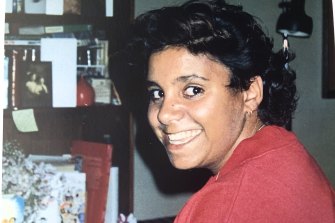 Noeline Dalzell was murdered by her former partner.

“I feel really sad thinking about future events without my mum,” Zachary wrote.

Younger sister Olivia wrote: “Living day to day is hard as mum or dad won’t be there for big celebrations, for example: first job, getting married, babies, birthdays.”

Paige wrote she had experienced sleep troubles, anxiety and panic attacks since her mother’s death, and said she could not bear handling knives or the sound of men’s voices being raised.

“I get mad with my friends when they complain about their parents being too strict or something … I say, ‘I don’t have any parents so don’t say that’. It makes me angry and sad,” Paige wrote.

Ms Warren said Fairhall regularly pulled knives and scissors out to intimidate his family when he was angry or drunk. Ms Dalzell’s brother, Malcolm, told the court of the guilt he now felt over his sister’s death.

“I always worried something would happen to Noeline and I feel like I’ve failed her and the children,” he said.

He and wife Jenny now care for the children.

When Fairhall chose to fight the murder charge at trial, his children had to give evidence and that was recorded and played to the jury. Fairhall accepted he killed his former partner and pleaded guilty to manslaughter, but argued he did not intend to kill. Prosecutors didn’t accept that plea and pushed for a murder conviction.

Fairhall’s lawyer, Jarrod Williams, on Thursday said his client endured a traumatic childhood as both parents were alcoholics, and after they separated he was physically beaten by his mother’s partners.

Fairhall began drinking as a teenager and by his early 20s was drinking every day.

After the stabbing, Fairhall held a knife up to a neighbour and told him not to call police. But Mr Williams said his client later showed some contrition and remorse, as he became distressed at seeing his former partner’s critical injury. He was arrested at the scene.

Justice Jane Dixon will sentence him on a later date.

'Sister Wives': Paedon Brown Admits He Was Told Not to Talk About Meri Brown