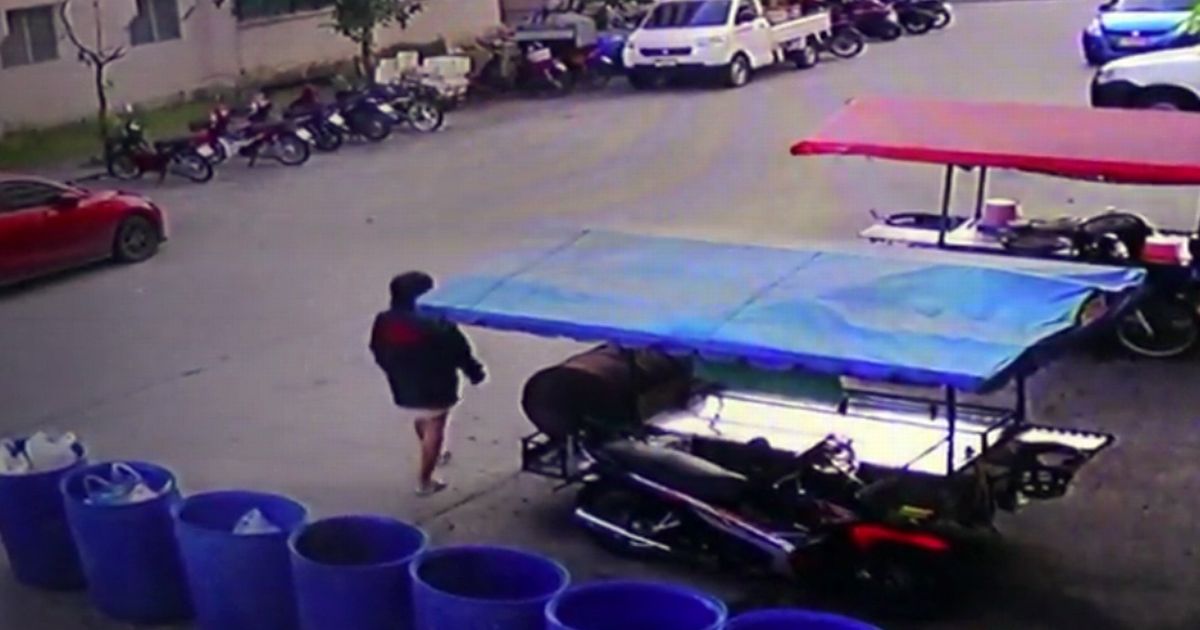 Harrowing CCTV footage shows a young woman throwing her stillborn twins into a rubbish bin- before walking off.

The mum is seen walking towards the large blue drums on Friday, November 30 at 4.30pm in Samut Prakan, Thailand, while carrying a plastic bag.

Then she drops the package into the container and turns to walk away, going back to her flat in the same block.

Later in the evening, a horrified woman found the stillborn foetuses while she was looking through the container for plastic drinks bottles.

Thonglun Kaewwonghiew, 57, told police that she was collecting recyclable plastic bottles for sale when she found the babies in a plastic shopping bag.

She said: ”I saw a white bag inside the bin and I thought it looked unusual. There was blood around the edges so I took picked it up to have a look.

”Two tiny babies fell from the bag. I was shocked so I ran over to people nearby to ask for help.”

Police arrived at around 8.30pm and sealed off the scene.

They checked security cameras and traced the woman to a nearby apartment. While officers were checking the area, she handed herself in to police.

The woman, who has not been identified, claimed that she did not realise that she was pregnant because she broke up with her boyfriend over four months ago.

She said she felt pain on Friday morning but she thought it was menstruation pain so she took two painkiller pills.

At 11am she said she went to the toilet to relieve herself and the two stillborns came out.

She said she was shocked and did not know what to do.

The woman said she waited until the bleeding receded before dumped the bodies.

Police took her to hospital to be treated for bleeding.

Lieutenant Colonel Nipon Kongpoon said that officers had not charged the woman.

He said: ”This is not the correct way to handle the situation.

"The woman should have called the emergency services.

"But currently we do not believe that a crime has been committed.”