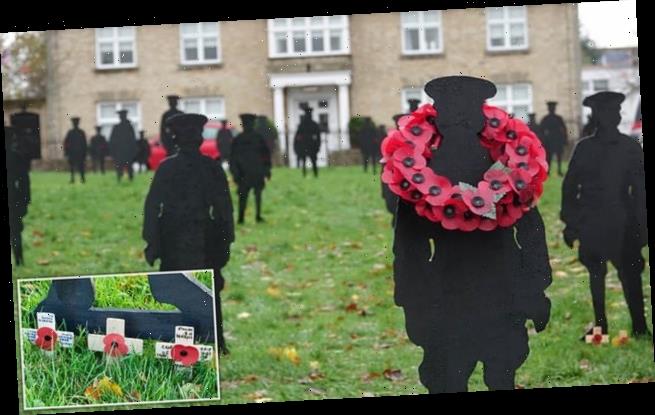 They shall not grow old: Moving display of 41 fallen soldiers’ silhouettes is erected on exact spot in where young men from Suffolk village were enlisted to fight in WWI

A haunting display of silhouettes of fallen soldiers has been erected on a village green where men were enlisted in a poignant act of Remembrance.

The black-painted 4ft tall plywood cut outs of 41 soldiers represent all the men from Haughley, near Stowmarket, Suffolk, who died in World War One and World War Two.

The touching display has attracted hundreds of visitors since being installed last week on the green at the centre of the village.

The silhouettes were designed by villager Kieron Palmer, 47, as a way of paying tribute to those who lost their lives.

He was inspired to create his art installation for the first time last year after he planted daffodils on the green in 2018 to celebrate the 150th anniversary of his family’s bakery in Haughley. 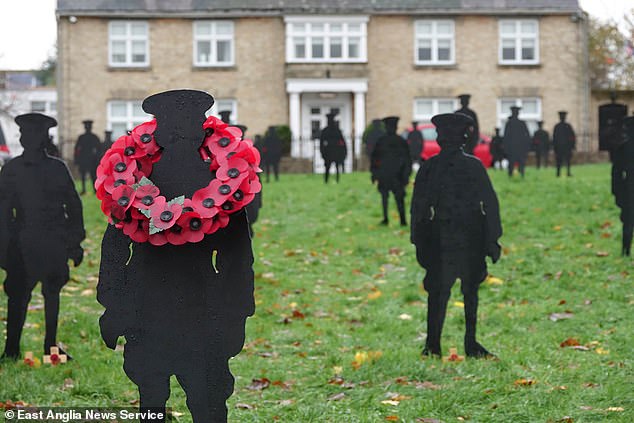 The black-painted 4ft tall plywood cut outs of 41 soldiers represent all the men from Haughley, near Stowmarket, Suffolk, who died in World War One and World War Two

When the daffodils grew up in clumps in the spring, he thought they looked like clusters of troops on a battlefield which gave him the idea to make his soldiers.

Mr Palmer whose family have lived in the village for 500 years got a carpenter to make a template from an old photograph of a soldier.

He then used a jigsaw to create each silhouette over a period of 20 weeks, paying for materials out of his own pocket

Each silhouette represents one of the names on the village war memorial of the 31 men from the Haughley who died in World War One or the ten from World War Two. 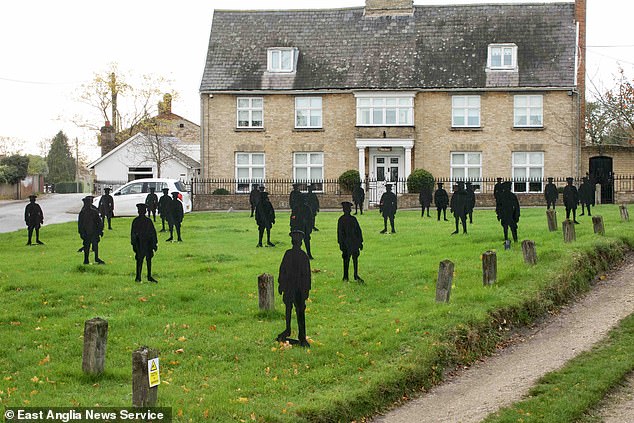 A small wooden cross at the feet of each one gives the name and age of a fallen soldier from the village, and the year of their death.

Several families in the village today are related to the soldiers who are being commemorated.

The display proved so popular in 2019, that Mr Palmer decided to install it again this year.

He said: ‘It is quite poignant that it is on the village green because that is where the young men were recruited during World War One.

‘One of the Captains from the Yeomanry turned up and urged them to sign up for King and Country. 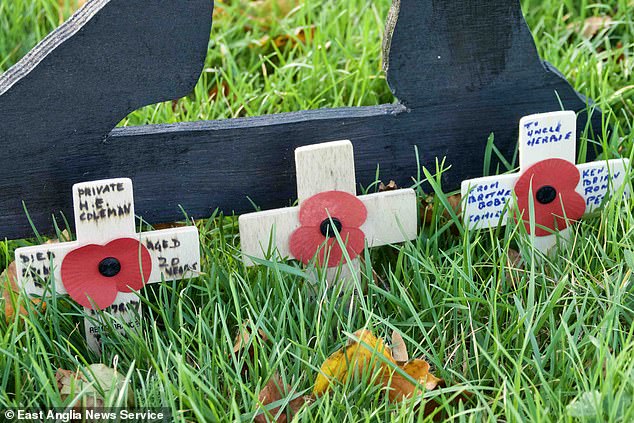 A small wooden cross at the feet of each one gives the name and age of a fallen soldier from the village, and the year of their death

‘He assured the local lads that it would all be over in six months and they all marched off to go and fight. Most of them were just teenagers. Sadly, many of them never returned.

‘Four or five of them were killed when they went over the top on the first day of the Battle of the Somme.’

Mr Palmer said the dead included his great grandmother’s nephew Edwin Woods, a Boer War veteran aged in his 40s, who was killed at Arras in France.

He added: ‘Walking around the silhouettes, gives you a real feeling of being amongst them. It transposes what you may read on paper, to being something physical. 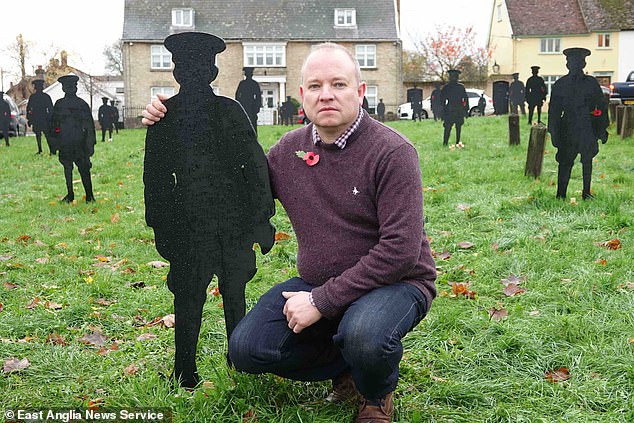 Village baker Kieron Palmer, 47, who erected the silhouettes of fallen soldiers on the village green at Haughley, Suffolk

‘It’s important to visualise how many died. Just seeing a number means it is sometimes difficult to see how many sacrificed themselves.

‘It is really emotional walking amongst them, I get goose bumps. It’s really poignant. The display brings home the sheer loss of young life.

‘Thousands of people visited the installation last year and we had 350,000 looking at the pictures of it online.

‘One group of people included a blind man who was very impressed as he could actually feel the silhouettes.’ 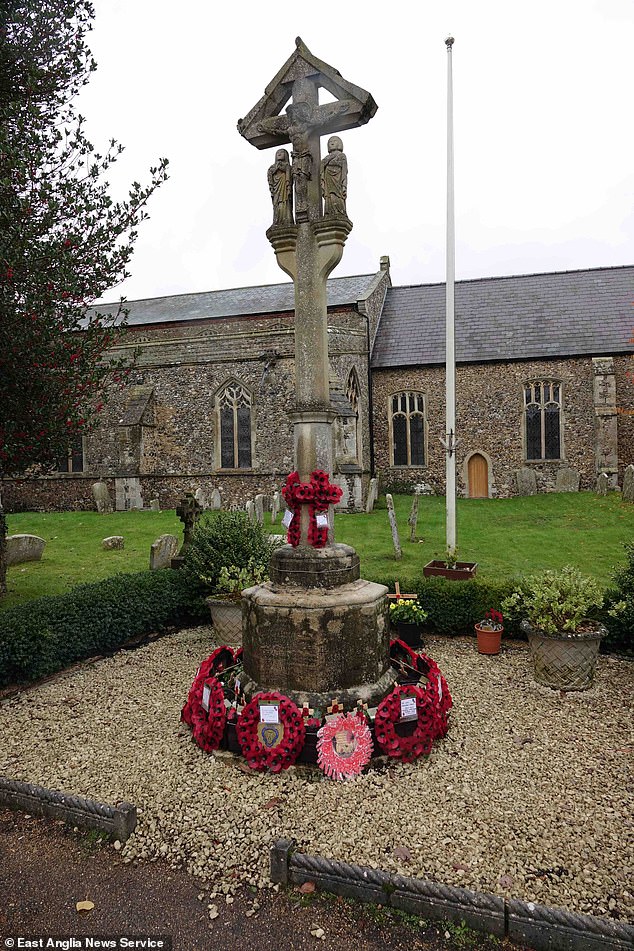 The village war memorial at Haughley, Suffolk. Thirty one men died in WWI and ten in WWII

Last year’s installation raised £1,000 for the Royal British Legion from donations left by visitors and collected in Mr Palmer’s bakery next to the green

This year he is also selling poppy-shaped biscuits and muffins to help his appeal.

Mr Palmer added: ‘It is important that even a small village like Haughley honours the men who fell for them.’

It had been planned to hold an open air service among the soldiers on Remembrance Day – November 11 – but that has been cancelled due to coronavirus restrictions. Villagers are instead being urged to stand on their doorsteps during the two minute silence.

The Prime Minister’s official spokesman on Monday said that guidance would be given to councils but remembrance events would be allowed as long as social distancing was maintained.

There will still be a national service at the Cenotaph in London, which will be broadcast on TV.

The PM’s spokesman said: ‘We are certainly not cancelling Remembrance Sunday events but we must be mindful of the risks such events pose, especially to veterans who are often elderly.

‘What we are saying to local authorities in England is that they may organise remembrance services but they should be outside and social distance should be maintained.

‘We will be updating the guidance shortly.’

The spokesman added: ‘It’s important that the country can continue to come together to remember the sacrifice of those who have died in the service of their country and we will ensure that Remembrance Sunday is appropriately commemorated while protecting public health.’

It had been reported that Health Secretary Matt Hancock had told Tory MPs that only ‘short, focused’ wreath-laying events will be allowed.