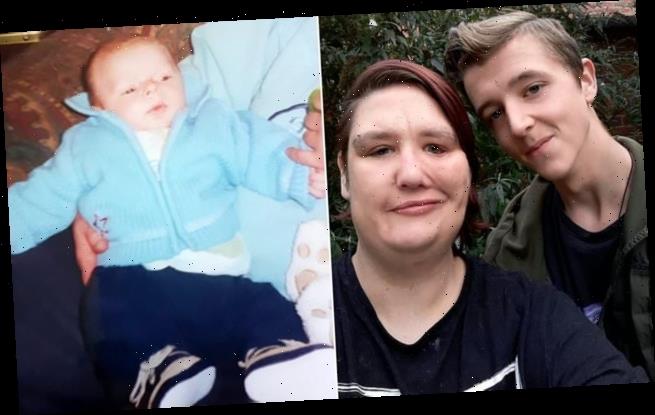 Mother, 37, warns parents not to sleep with their newborns after her six-week-old baby died as they shared bed

A mother whose six-week-old baby died while they shared a bed has revealed her life of heartbreak as she pleads with other parents not to sleep alongside newborns.

Bex Middleton, 37, woke to find Lewis lifeless by her side after she brought him into her bed to help him settle better.

Paramedics fought to save his life but medics later confirmed he died of Sudden Infant Death Syndrome (SIDS). 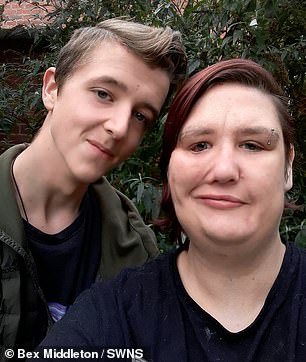 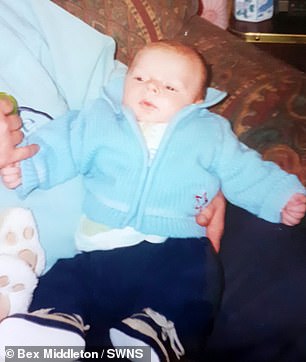 Bex Middleton (pictured with her 15-year-old son, Connor) is disturbed that parents continue to co-sleep with their infants

Sometimes called cot death, SIDS is the unexpected and unexplained death of an apparently healthy baby, but studies show bed sharing can be a contributing factor.

More than a decade on, Bex said she still blames herself, despite the co-sleeping link being almost unknown at the time of his death in 2003.

Figures recently released by the ONS reveal in 2017, 182 babies died from SIDS – a 20 per cent decrease on the year before.

Now a mother to 15-year-old Connor, she said she’s left fuming and upset when she hears parents continue to co-sleep.

Bex, a care worker, from Stafford, Staffordshire, said: ‘It’s just not worth it. The consequences of what could happen do out-weigh the benefits. 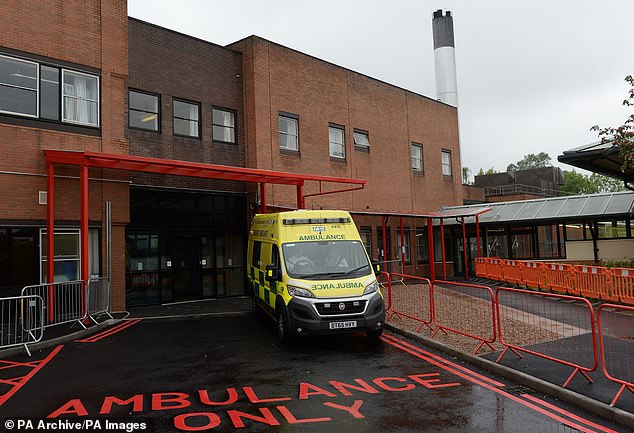 ‘It’s heartbreaking for me. Nothing will bring Lewis back and I think about him every day.

‘There was no awareness of the dangers of bed-sharing at the time. The midwives actually told me to bed share to help Lewis settle at night. I was given no advice but after he died I did my own research and realised the link.

‘I blame myself and still feel guilty about it. I shared beds with Lewis every night and have lived a lifetime of guilt because of it. The consequences of sharing a bed are devastating.’

Bex was just 21 when she fell pregnant with Lewis in 2002 and admits she wasn’t planning on becoming a mum at the time. She was in a short-term relationship with a previous partner.

Lewis was born at the County Hospital in Stafford on November 24 2002 and he was a perfectly healthy baby.

But Bex woke up next to Lewis on the morning of January 4 2003 to find him motionless and with a trail of blood coming from his mouth.

She said: ‘He looked ok but when I picked him up he was lifeless and there was a trickle of blood from his mouth.

‘I screamed at the top of my voice and rang the ambulance. They tried to resuscitate him but he was pronounced dead in hospital. I was absolutely devastated and felt completely numb. I didn’t deal with it very well at all and the grief was awful.’

Cot death, or SIDS, was confirmed as the cause of death by doctors and when Bex was told, it was the first time she’d ever heard of the syndrome.

She said she was never warned not to share a bed with her newborn and was in fact advised to sleep next to Lewis to help him sleep better at night.

It wasn’t until after his death she realised the link between co-sleeping and cot death. 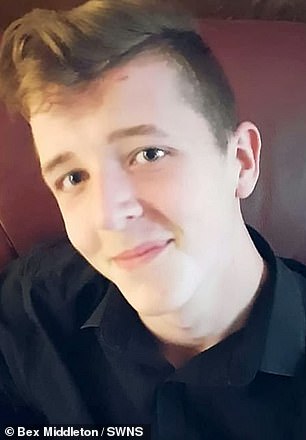 The mother says that where it not for her teenage son, Connor (pictured), she wouldn’t be here today

‘It’s the worst feeling a mum can go through and I can’t describe the emotions’, said single mum Bex. I felt like my world had come crashing down on top of me. I felt so guilty.

‘There was no awareness of the dangers of bed-sharing at the time. The midwives actually told me to bed share to help Lewis settle at night.’

Since the 1990s the rate of SIDS related deaths has decreased by 82 per cent, according to SIDS charity The Lullaby Trust.

They raise awareness of safe sleeping and the dangers of co-sleeping and argue sleeping with a baby can increase the risk of cot death 50 times.

But despite this, around 200 babies still die every year of SIDS in the UK. Of 8,207 infant deaths studied by US researchers between 2004 and 2012, 69% of the babies were bed-sharing when they died.

According to Department for Education statistics, 665 UK baby deaths have been linked to co-sleeping over the past five years.

Bex fell pregnant with Connor after a drunken night out, just a month after Lewis’ death.

She found out about the pregnancy in March 2003 and admits she ‘wasn’t ready’ to be a mum again.

Bex said she felt like she was ‘replacing’ Lewis, but as the pregnancy went on, realised just ‘how much I wanted the baby’.

DOES SMOKING CAUSE SIDS?

There is a large and convincing body of evidence showing that smoking during pregnancy and around a baby increases the risk of cot death.

Scientific evidence shows that around 30 per cent of sudden infant deaths could be avoided if mothers didn’t smoke when they were pregnant, according to The Lullaby Trust.

Taken together with the risks of smoking around a baby at home, this means that smoking could be linked to 60 per cent of sudden infant deaths.

A major study from Bristol University’s institute of child life and health found nine out of ten cot death victims had mothers who smoked during pregnancy.

The report in 2007 said smoking may have an effect on brain chemicals in the foetus, or could prevent the lungs developing properly.

Remarkably Bex found out Connor was due to be born on Lewis’ birthday – November 24 – but asked to be induced into labour early.

‘There was no way I could have given birth on the same day,’ she said. ‘I just could not imagine the boys having the same birthday.

‘That date is Lewis’ birthday and it would have felt wrong. The thought of it made me feel sick.

‘But if it wasn’t for Connor I don’t know if I’d be here now. He gave me the strength to carry on. He’s not a replacement for Lewis, they are brothers.’

Bex celebrates Lewis’ birthday every year by eating cake and remembering happy memories of their short time together.

She has a memory box at home to remember Lewis by which includes congratulations cards, prints of Lewis’ feet, flowers and sympathy cards from friends and family.

Bex is sharing her story to raise awareness of the potentially tragic consequences of bed-sharing.

She dedicates a lot of her spare time to raising awareness of the dangers of bed sharing.

WHAT IS COT DEATH AND HOW CAN IT BE PREVENTED?

Sudden infant death syndrome (SIDS), or cot death, is the sudden, unexpected and unexplained death of an apparently healthy baby.

It usually occurs within the first six months of an infant’s life and is more common in those born prematurely or of a low birth weight.

The cause of SIDS is unknown, however, it is associated with tobacco smoke, tangled bedding, co-sleeping with parents and breathing obstructions.

Prevent the risk by:

Arsenal star Mesut Ozil is a party animal who ‘loves ladies’ and ‘knew how to fire it’ in nightclubs, claims Bendtner – The Sun