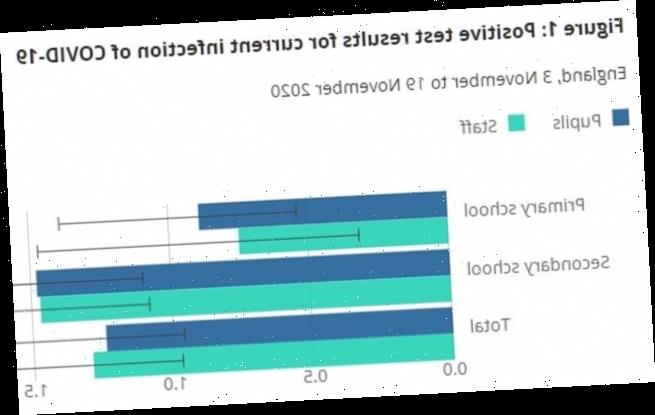 More than HALF of schools in England had coronavirus cases during first fortnight of November’s lockdown, surveillance report reveals

More than half of schools in England had coronavirus cases during the first two weeks of November’s lockdown.

A report from the Office for National Statistics shows that of 105 schools that had mass testing between November 3 and 19, 58 found one or more positives.

The same number of schools found one case as found multiple – 29 in each category (27.6 per cent of the total).

Infection rates were highest among secondary school pupils in the study, and lowest in primary school staff, the report found.

Although teenagers have had some of the highest infection rates in the country during the second wave, closing schools is no longer included in lockdowns because of the long-term damage experts fear it could do to young people.

The ONS survey was conducted on 9,662 staff and pupils in 63 secondary schools and 43 primaries.

Two thirds of the schools were in areas with relatively high rates of coronavirus – the statisticians said the survey results were not representative of the whole of England because choosing high prevalence areas meant there was bias, likely to the North.

One of the study’s lead investigators said it showed ‘a significant number of students and staff who were attending school had coronavirus infection’.

But they admitted the results of the study were not statistically significant, meaning they are not strong enough to prove differences between the groups. 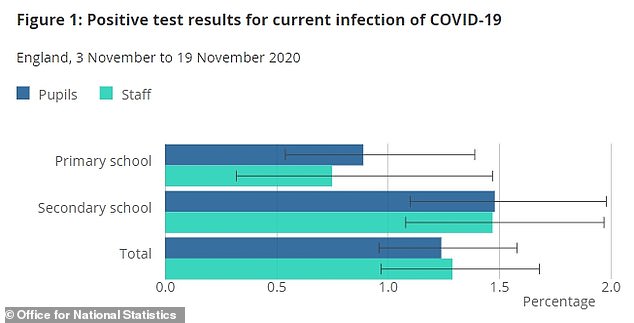 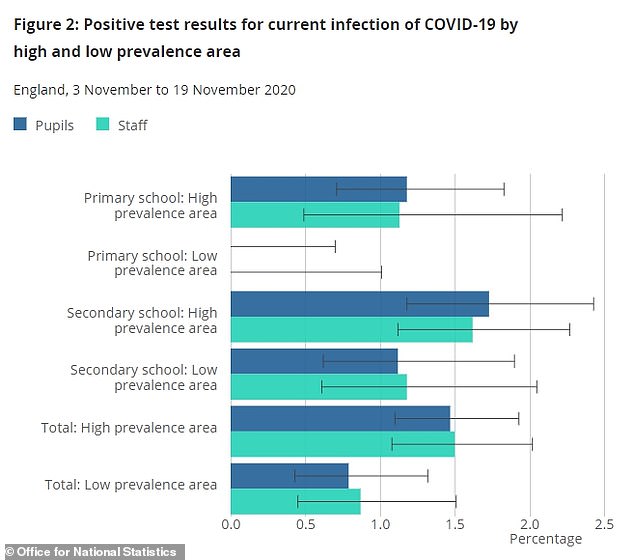 The ONS survey found that in the worst-affected parts of the country 1.47 per cent of school pupils and 1.5 per cent of staff tested positive for coronavirus.

This is equal to around one in every 67 people.

In areas that had lower rates of officially diagnosed coronavirus the survey found 0.79 per cent of pupils and 0.87 per cent of staff were infected without knowing – around one in 124.

Pupils had higher rates than staff at both age groups in areas where coronavirus was high.

But in areas where coronavirus was less common, secondary school staff were more likely to test positive than their pupils, the survey found.

No cases were found in primary schools in ‘low prevalence’ areas.

Schools are a major focus for scientists and officials because they have the potential to be hotbeds for transmission as proper social distancing is impossible – but for some reason they haven’t been conclusively linked to outbreaks.

Children and teenagers are significantly less likely to develop Covid-19 or any symptoms of viral infection than adults, scientists have found.

And they believe this may also make young people less likely to spread the virus, and the better immune response might mean they’re less likely to catch the illness in the first place.

Dr Shamez Ladhani, lead investigator on the study and a Public Health England epidemiologist, said: ‘While there is still more research to be done, these results appear to show that the rate of infection among students and staff attending school closely mirrors what’s happening outside the school gates.

‘That’s why we all need to take responsibility for driving infections down if we want to keep schools open and safe for our children.’

He said this was the ‘clearest picture to date’ of how coronavirus affects schools.

His colleague Professor James Hargreaves, from the London School of Hygiene & Tropical Medicine, added: ‘These findings show that, in November, a significant number of students and staff who were attending school had coronavirus infection.

‘With this crucial collaboration between the scientists, school staff and pupils, and their parents, we hope to answer questions to ensure children’s education can continue in the safest way possible.’

Separate Public Health England data shows that some of the highest rates of infection during the second wave have been among teenagers.

This was a higher per-person rate than any other age group except people in their 40s, among whom it was 196.

CategoryWorld News
TagsE HALF in More of Schools than