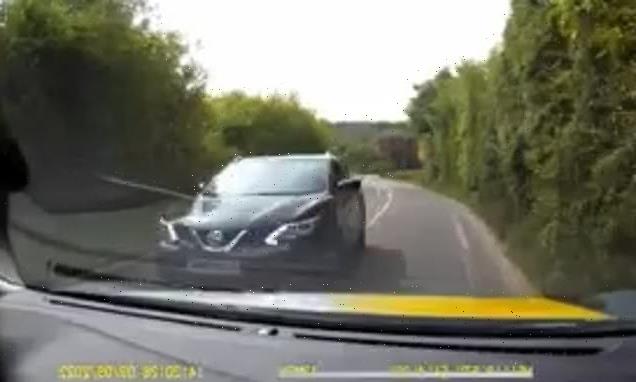 This is the terrifying moment a car veered onto the wrong side and ploughed into a driving instructor’s vehicle, causing it to flip before slamming into a tree – as the ‘idiot’ motorist avoids prosecution for the crash.

Colin Savage, 48, suffered whiplash and a shoulder injury when a black Nissan Qashqai ploughed into his Ford Puma along a country lane in Canterbury, Kent.

The driving instructor had tried to take evasive action and swerved towards roadside bushes, but could not avoid contact with the errant car.

His vehicle was left smashed to pieces following the collision, while his wife, a passenger in the car, is now a ‘nervous wreck’ and is scared to get back into a car.

Mr Savage has now slammed a decision by Kent Police not to prosecute the driver of the Qashqai, who was instead only asked to undertake a considerate driver awareness course. 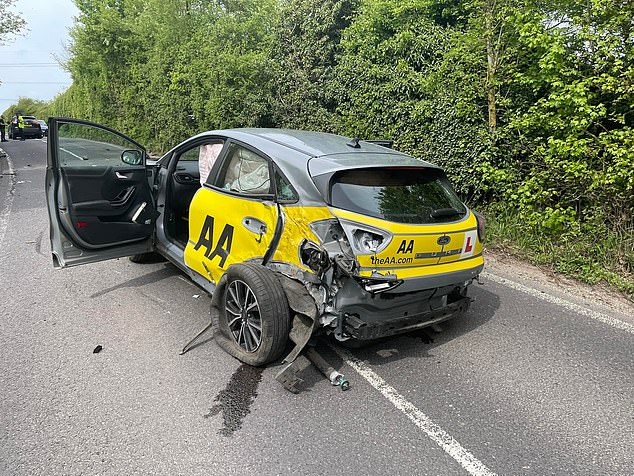 The driving instructor’s car was left in a heap following the collision, which caused it to overturn before striking a tree 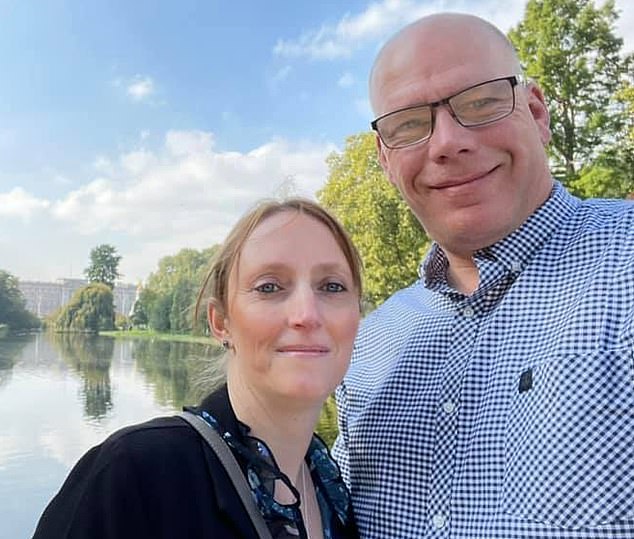 Colin Savage suffered whiplash and a shoulder injury, while his wife (both pictured) was rushed to hospital and is now scared of the prospect of getting into a vehicle 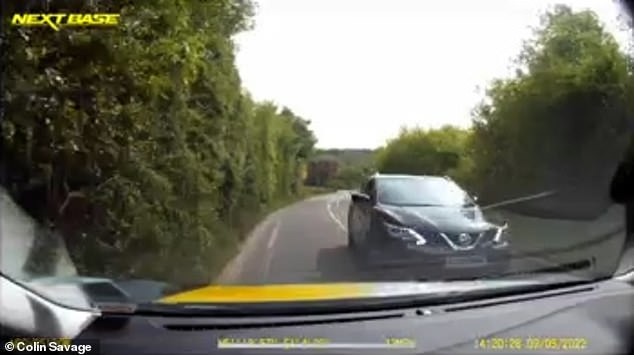 A Nissan Qashqai veered onto the wrong side of the road in Canterbury, Kent, before crashing into the driving instructor 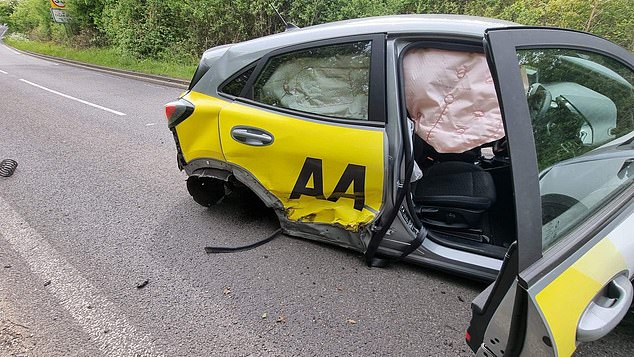 Wheels were removed from the car, such was the impact of the crash, while the airbags were deployed 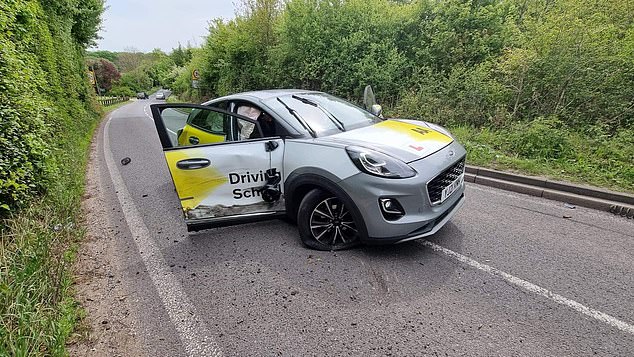 He told KentOnline: ‘I think it’s disgraceful. The police said, “Oh, he’s not got away with it” – but he has.

‘They are not prosecuting him, he has nothing on his licence and he’s not affected in any way, shape or form.

‘I have potentially got to have surgery on my shoulder and my wife is seeing a psychiatrist because she bursts into tears every time we drive down a country lane and a car comes the other way.’

He said he had only ‘one second to react’ after the driver had veered ‘a metre’ into his side of the road.

The Nissan caused Mr Savage’s vehicle to overturn before hitting a tree.

He added: ‘I absolutely dread to think if it had been one of my learners driving and he had come round the corner. I look at the video and I don’t know how I missed it.’

Mr Savage’s wife was taken to hospital following the crash having suffered muscle damage that has made her existing arthritis ‘1,000 times worse’.

He described how she was left ‘black and blue all over’ from the impact of the seatbelt and airbag, while she has also been referred to a psychiatrist.

The driving instructor said: ‘She tries to avoid driving now. She used to be a very confident driver and passenger.

‘We would drive everywhere and she would do map-reading, but now she is a nervous wreck. 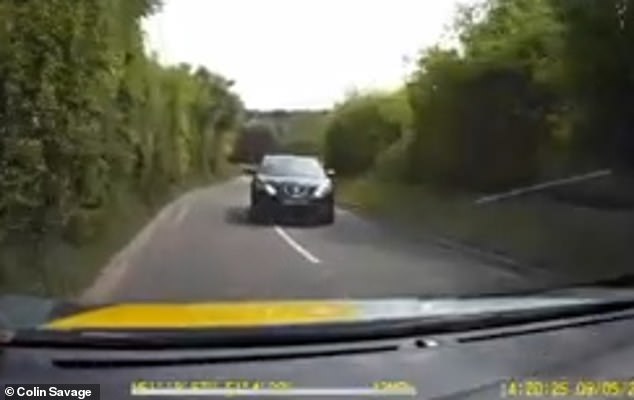 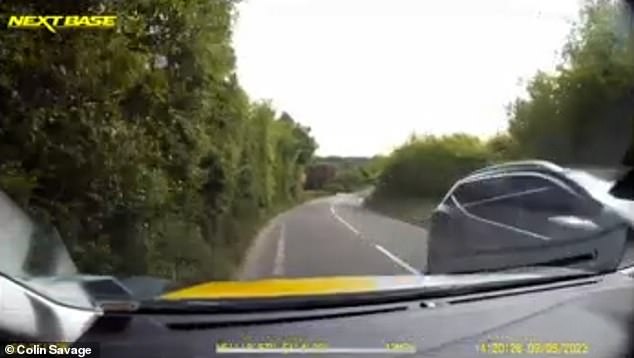 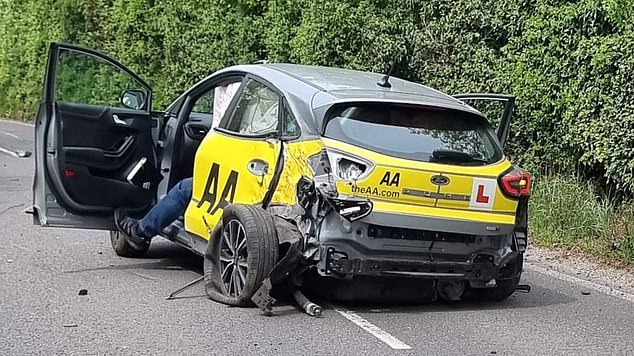 The car was left with a huge amount of damage, while Mr Savage and his wife also suffered injuries in the collision 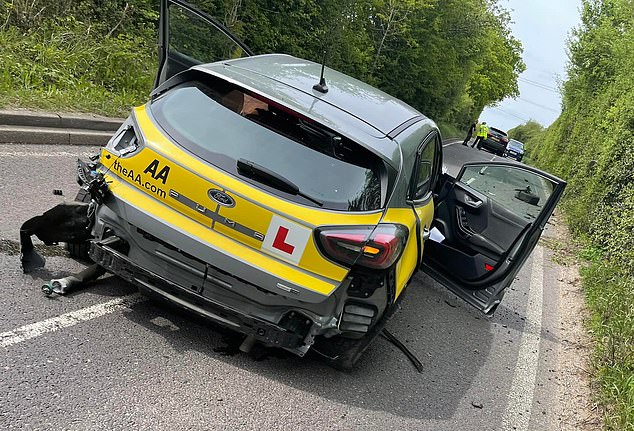 But police have decided against prosecuting the driver, instead asking him to undertake an awareness course

‘Every time we go on the road and there is a car coming the other way, she flinches.’

A spokesperson for Kent Police said officers and paramedics were called to the scene at around 2.25pm on May 9.

The force added: ‘A woman was taken to a local hospital as a precaution and officers worked to clear the road and assist the recovery of the vehicles.

‘A breathalyser brought to the scene was found not to be working, so neither driver was breathalysed, although there was no suspicion of drink driving against either of the parties involved.

‘Following a review of the circumstances by Kent Police’s Traffic Summons Case Review Team, one of the drivers involved has been offered to undertake a safe and considerate driver awareness course.

‘Should the driver decline to take the course, the issuing of a court summons or fine will be further considered.’