This is the moment a cheeky boxer dog was caught drinking from a fridge’s water dispenser at a family home in Washington.

In video footage shared online, Walter can be seen standing on his back legs with his head tucked well inside the machine.

His owner continues filming as she walks around him and observes him gulping away, completely undisturbed by her presence. 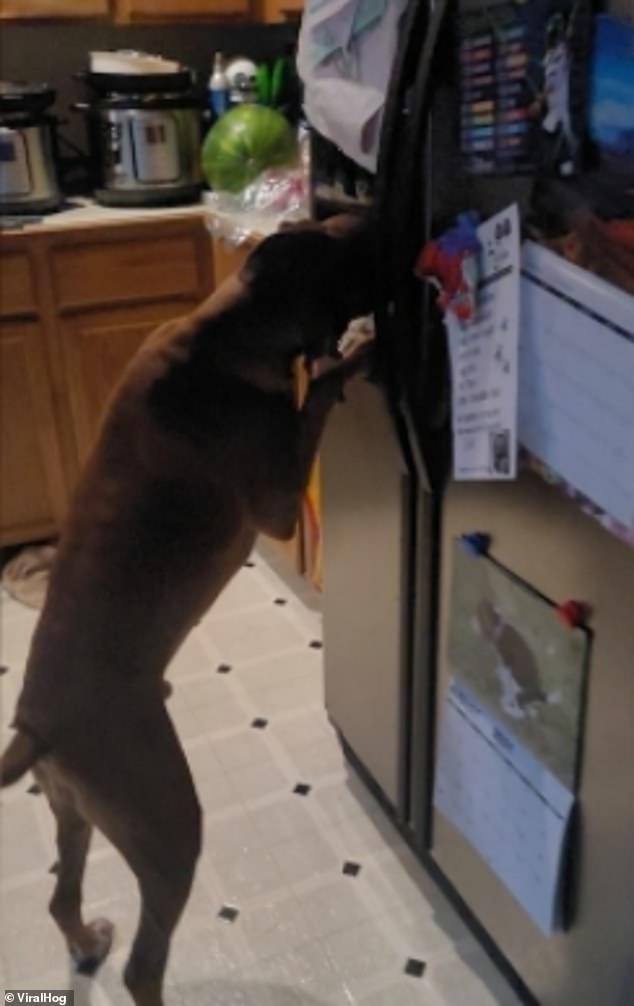 Walter is seen in a video gulping away at the fridge’s water dispenser at a family home in Renton, Washington 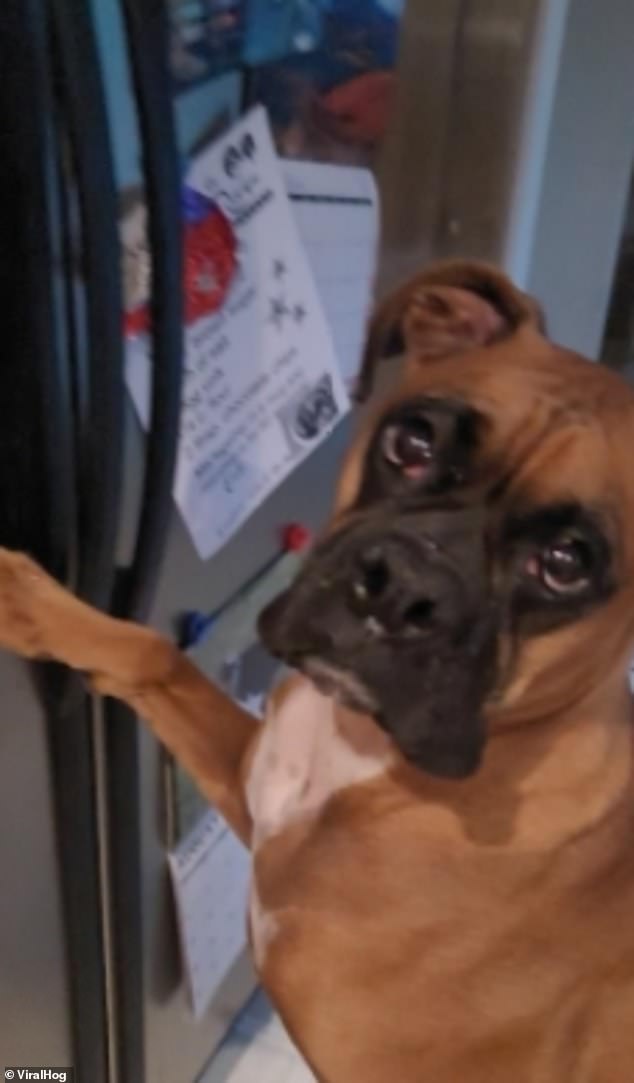 Walter’s owner eventually calls out his name, causing him to remove his head and give her a glance with his puppy eyes 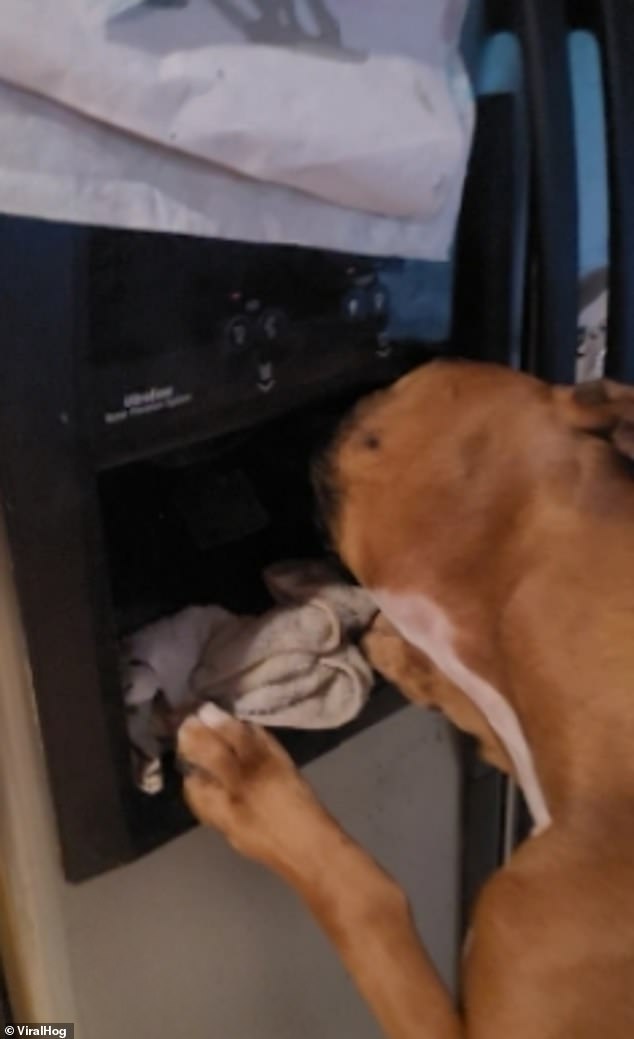 In the short clip, Walter can be seen with his head deep inside the dispenser as he gulps away 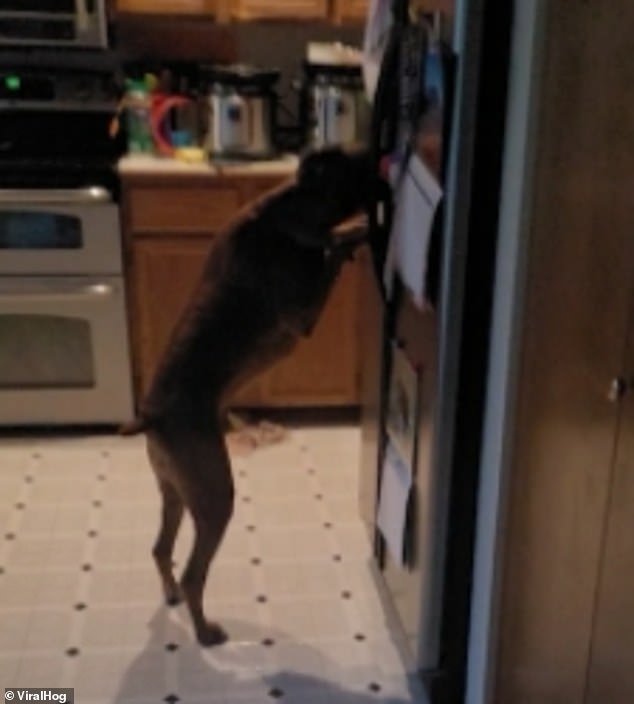 The clip has divided social media users, with some calling it cute and others ‘unhygienic’

She eventually shouts his name, causing him to remove his head from inside the dispenser and glance at her with his puppy eyes.

The video, recorded in Renton, has been viewed more than 50,000 times since being uploaded to Facebook this week.

But the footage has divided viewers, with some branding it cute and others labelling it ‘disgusting’ and ‘unhygienic.’

Some branded Walter a ‘very clever boy’, with one saying: ‘He’s no dummy…knows where the good stuff is.’

Another said: ‘I’ve often said animals are smarter than some people I’ve met.’

But others were not impressed by the clip.

One social media user wrote: ‘Cute and you can get a little giggle from this’, but added: ‘He’s intelligent but this disgusting!’

Another said: ‘And then, they lick their parts and their behind and they drink some more… I love dogs, but this is too much!’

‘Yuk that’s hygiene gone down the drain!’ said one, while another agreed, adding: ‘I certainly wouldn’t want to be getting water from there after that dog did that. Ew.’

It’s not the first time a dog has been caught misbehaving in the kitchen. 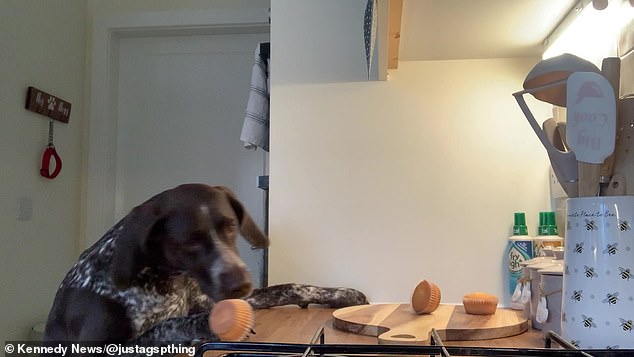 The hungry pointer tries to grab hold of the one of the baked goods before it topples over the worktop in Wrexham, North Wales 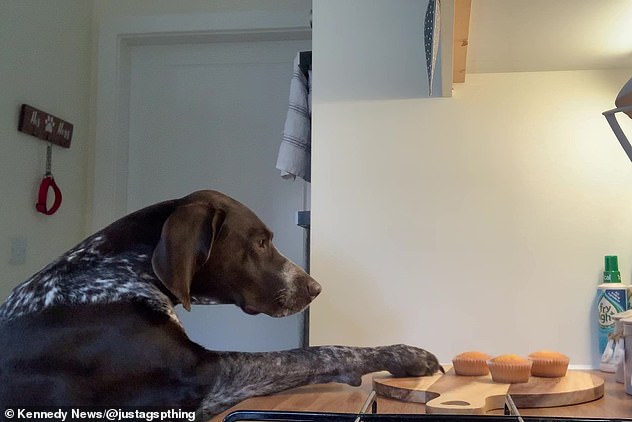 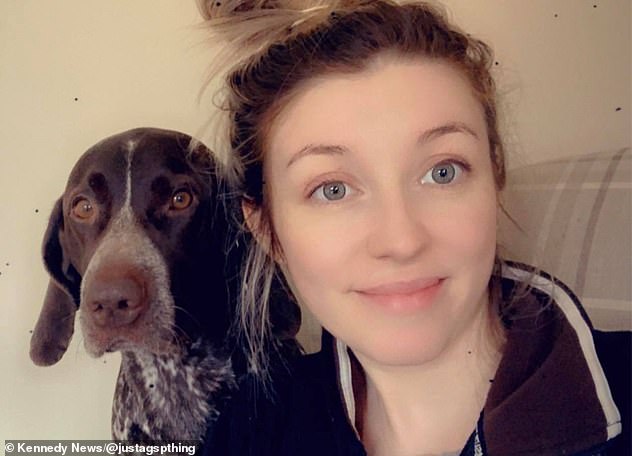 Owner Kara Probin (pictured with her dog River), 25, from Wrexham, North Wales, decided to set up a hidden camera after more than 15 cakes went missing amid the coronavirus lockdown

Kara Probin, 25, from Wrexham, North Wales, decided to set up a hidden camera after more than 15 cakes that she had baked during the coronavirus lockdown last July vanished.

After leaving the lens pointed at three cupcakes on her wooden counter, the mother-of-one, who had been baking at home with her civil engineer partner Owen Davies, 26, saw her hungry pointer River steal the baked goods and scarper.

During the footage, which was captured on June 29 last year, the three-year-old dog sniffs out the tasty treats and tries to reach one using her paw.

Having checked the coast is clear, River drops out of sight before reappearing and grabbing the nearest cake with her right paw and dragging it to the floor.

Seconds later, the hungry hound reappears and snaffles another cupcake in her jaws before scarpering out of shot and leaving the final cake on its side.