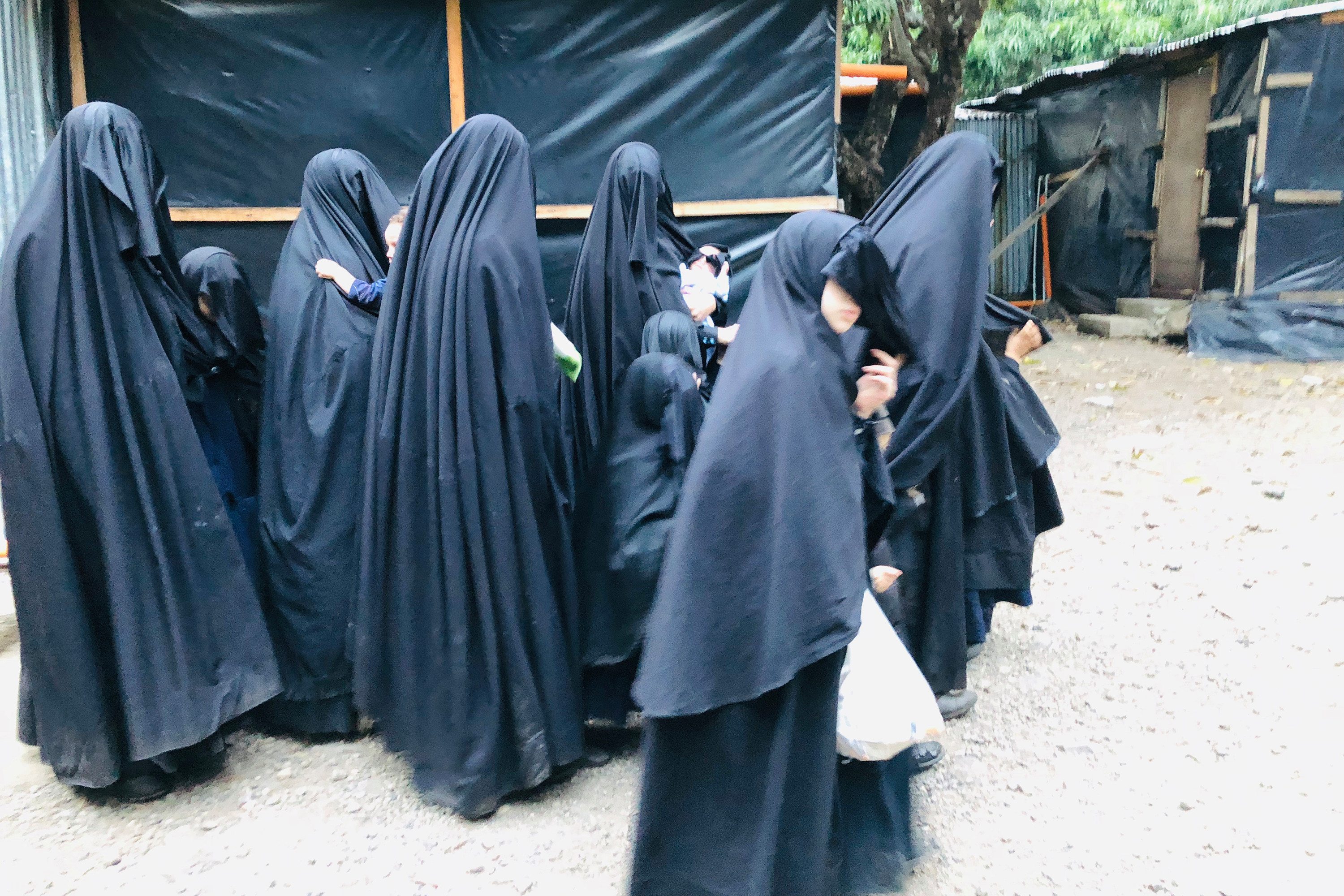 Her home was a remote, guarded compound in Guatemala featuring makeshift houses with wood pellets for floors, plastic bags over two-by-fours for walls and tin sheets for ceilings.

There was no air conditioning, no hot water and, until recently, no toilets.

But Sara Helbrans, 32, didn’t start making waves until earlier this year, when she was told her then-13-year-old daughter would be marrying the son of a community leader, according to filings she submitted to a Brooklyn court.

Sara spoke up, and her world collapsed, setting off a chain of deeply disturbing events that have now resulted in a court custody battle and the reported arrest of five former community leaders, including her brother.

Helbrans alleges the group from which she escaped is a cult — and she and her six kids are in desperate need of protection.

“I am very imminently afraid from the cult and what the [children’s] father and other cult members may do now that we are no longer under their power and manipulation,” the frantic mom wrote in the court filing.

“The cult,’’ as Helbrans calls it, is a religious Jewish group known as Lev Tahor, or “Pure Heart’’ in Hebrew.

And until she fled, it had provided the mom with the only life she had ever known: Her father, Shlomo Helbrans, founded the group in Jerusalem in 1987.

Lev Tahor’s goal is to practice “unadulterated Judaism,” according to literature distributed by the group. This includes demanding severe modesty for its women and girls, who must wear burqa-like black coverings from head to toe, as well extreme dietary restrictions for members — and an unwavering adherence to their faith.

But critics say Lev Tahor is more persecutor than proselytizer.

In 1994, the group settled in Brooklyn — where Sara’s father was convicted of kidnapping and conspiracy in the case of a teenager who disappeared from his mom’s New Jersey home. Shlo­mo served two years in prison and was later deported.

The group, which consists of between 35 and 40 families, moved to a quiet town in Quebec, Canada’s, Laurentides region north of Montreal in the early 2000s. There, the home-schooling of its more than 100 kids without a secular component drew the attention of child-protection workers.

Denis Baraby, the former director of Laurentides’ Youth Protection Services, which has investigated Lev Tahor, told The Post he witnessed alarming conditions during visits to some Lev Tahor homes.

There were holes in the floors, urine-soaked mattresses and bugs — with rarely a toy in sight, he said.

“Medical services, proper hygiene, proper food was not provided for these children,” Baraby said, adding he and his co-workers were “shocked by the children’s living conditions.’’

He said the Quebec Youth Court was ready to grant his agency oversight of two Lev ­Tahor families with 14 kids between them but couldn’t execute the order because the secretive community had already fled.

A former member who escaped from the community in 2012 told The Post that group leaders forced him to live in a closet for 10 days as punishment for arguing when he was 8.

There were holes in the floors, urine-soaked mattresses and bugs — with rarely a toy in sight.

The young man’s only reprieve during that span was for bouts of public denigration, he said.

“Basically, what they do is they take you in front of the whole community, and they talk against you, and they embarrass you, and they spit in your face just to break you down . . . slap you in front of like 80 people,” the now-22-year-old Staten Islander, who asked to be identified only as David, told The Post.

Because he was seen as too rebellious to reform, his request for freedom was eventually granted, according to David.

So one night, he signed papers nullifying his engagement to a teenage girl in the community and promising not to speak ill of the group.

Then he hopped into a taxi bound for New York.

By last year, Lev Tahor had resettled once again, this time near the small city of Oratorio in Guatemala — and with a new leader.

Shlomo Helbrans had drowned in a river on a trip to Mexico in 2017.

His son, Sara’s brother Nachman Helbrans, took over the leadership role along with a group of associates, sources and Sara’s court filings said.

Even with those family connections, however, Sara’s complaints about her young daughter’s arranged marriage weren’t well received.

The mom, who through associates declined to comment to The Post, alleged in the court papers that she was instantly ostracized by her community, separated from her husband and children and ordered to perform the most menial of tasks.

“They tortured her. She wasn’t allowed to talk to anyone,” said a source familiar with the alleged incidents. “She was forced to clean toilets.”

Sara was finally told to leave and renounce custody of her kids, according to her court filing.

She refused. Instead, early on Oct. 5, 2018, she quietly hunted for her children in the homes where they had been living in a bid to rescue them.

“She tried grabbing all her kids, but since her kids were with different families, she only found” three, Yakov Flitchkin, a Jewish-community activist in Brooklyn, told The Post, referring to Helbrans’ 10-, 8-and 5-year-olds.

The mom grabbed the children she could locate and “ran for her life,’’ said Flitchkin, a friend of Sara’s family who flew down to Guatemala to assist in October.

Sara’s supporters, worried about the three of her kids she had left behind — then-13-year-old Yante and two of her brothers, 12-year-old Chaim and 6-year-old Duvid — soon contacted local authorities, who blasted out their version of an Amber Alert on Oct. 29.

The kids were discovered with their father in Mexico 10 days later, according to Sara’s court filings.

The dad, with whom The Post unsuccessfully tried to speak, was detained and the children flown to Brooklyn by an advocate for Sara, sources and the court filings said.

The mom was already in the borough with supporters, as were her other three children.

But Sara’s mind was not eased.

“I am very worried, afraid and concerned that the father and his fellow members of the cult will try to kidnap the children and compel the children to return to the cult, where they are in danger of malnourishment, corporal punishment and forced to marry persons much older than them,” she wrote in her Nov. 14 filing in Brooklyn Family Court, seeking custody of her children and an order of protection against her husband.

At least one of Lev Tahor’s leaders, who identified himself to The Post as Shmiel Weingarten, arrived in Brooklyn from Guatemala after Sara and the kids did, according to associates of the mom.

On Nov. 20, in response to Sara’s court filing, he filed a petition on behalf of Yante in which she purportedly requested to live with her father or be emancipated from both parents so she could return to Guatemala.

The filing included allegations against Sara of abuse, which ­allegedly intensified after Shlomo Helbrans’ death.

“She would beat the children much more because of anger, and the house became a nightmare, until my father had no other choice but to send the children to other families from time to time,” says the petition filed in Yante’s name.

Weingarten told The Post his group considers the children kidnapped from their father.

He denied all claims of abuse and mistreatment of children in Lev Tahor that have been leveled over the years, saying the stories were being whipped up solely to destroy the group.

Then, nearly two weeks ago, Sara and all of her kids were supposed to be together upstate to relax and try to strengthen the bonds that had been weakened by months of hardship.

She has custody of the children pending a Jan. 3 hearing, and she also received an order of protection against her husband, who still belongs to the group, according to court documents.

But at about 3:30 a.m. on Saturday, Dec. 8, Yante and Chaim were spotted hopping into a car outside the Fallsburg home of friends with whom the family had been staying in the Catskills.

“The teens were last seen getting into a vehicle in front of the home,” the New York State Police said in a press release. “The children are not believed to be in any imminent danger, and are believed to have traveled to New York City.”

Local and state police have since warned officials at a regional New Jersey airport about the disappearance of the children.

On Wednesday, Nachman Helbrans and four other Lev Tahor leaders and members were arrested in a joint operation involving the FBI and Interpol in Mexico, according to The ­Yeshiva World.

FBI officials didn’t immediately respond to a request for comment.

As of late Wednesday, however, the two kids were still missing — leaving their mother distraught, according to Flitchkin.

Sara “is very concerned about the kids,’’ he said. “It’s not an easy time for her.”

After ‘Get Out’ Breakthrough, Betty Gabriel Is Ready to Build a Career That Lasts