Heritage groups, architects and residents fear acclaimed Shell House is at risk of destruction after Planning Minister Richard Wynne called in an application to redevelop it under the Heritage Act.

The 28-level skyscraper at the corner of Flinders and Spring streets, which was designed by world-renowned architect Harry Seidler, is heritage listed and one of Melbourne’s most awarded pieces of architecture. 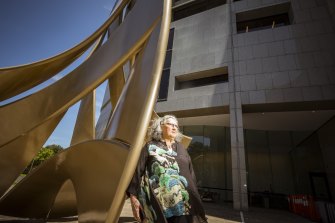 Spring Street resident Elizabeth Loftus, is concerned about the proposed tower to be built over and around heritage buildings at 1 Spring Street. Credit:Chris Hopkins

However, the National Trust, the Australian Institute of Architects and residents are concerned the building’s aesthetic will be ruined after an application to demolish part of the building and construct a second 33-storey office tower was called in by the minister.

Shell House’s owners, the Besen and Roth families, want to dig up the rear plaza in Flinders Lane and build a second tower, standing apart from Shell House but linked via a sky bridge at the 15th level.

Mr Wynne’s decision to call in the application meant the independent Heritage Council review hearing scheduled for early 2022 was cancelled.

The minister has never personally called in an application included in the Victorian heritage register, but it has happened four times in the past 25 years — for applications on the former Victoria Car Park, the Bacchus Marsh Avenue of Honour, the former Hoffman Brickworks and the Herald and Weekly Times building.

Simon Ambrose, chief executive officer of The National Trust for Victoria, said the group had serious concerns about Mr Wynne’s “extraordinary” decision to call in the redevelopment application.

“Shell House is included in the Victorian Heritage Register as one of the state’s most significant buildings,” he said. “This redevelopment will destroy its setting, and undermine its architectural and aesthetic integrity.”

Shell House is Melbourne’s only tower designed by Mr Seidler, a pioneer of modernism in Australia and one of the country’s most influential architects. 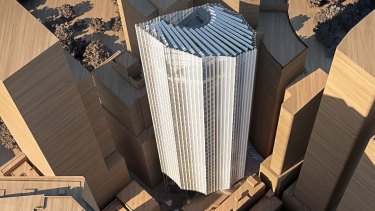 It has won both state and national architecture awards and was heritage listed in 2017.

Mr Ambrose said, if the development was approved, it would set a concerning precedent for future developments at heritage sites in the CBD, and undermine the integrity of the state’s heritage register.

“All Victorians should be concerned about Minister Wynne’s extraordinary decision to use his powers to ‘call-in’ the permit application, pre-empting the outcome of an appeal before the state’s independent Heritage Council,” he said. “Decisions about our most important places should not be made behind closed doors.”

The Australian Institute of Architects also objected to the proposed redevelopment in a rare intervention. It said constructing a second tower at 1 Spring Street would result in “irreversible damage” to a significant heritage place.

Mr Wynne, who announced he would retire at the 2022 election, defended his decision to call in the application. He said it was due to Shell House’s heritage significance and the site’s position as a gateway to the city.

“Calling in the application means the heritage permit and development applications can be considered in tandem in a single forum,” he said. “The Heritage Council will provide a report on the amended application that will inform the decision.”

CBD resident Elizabeth Loftus said she was concerned the development would change the character of the area, which was a unique heritage pocket.

“Shell House was only heritage listed in 2017 and yet here we are with an application to redevelop the site four years later. With the minister calling it in, it takes away the right of the Heritage Council to consider that application but also interested parties in the community,” she said.

Ms Loftus said she was concerned the actions showed the minister’s push to increase his powers.

“Normally the minister would allow the Heritage Council to have a hearing and receive public submissions, but in this case it has been called in without a public hearing. He is really sidestepping the purpose of the Heritage Act and the heritage listing.”

Fascinating answers to perplexing questions delivered to your inbox every week. Sign up to get our new Explainer newsletter here.

Spoilers: Daisy proves her love by saving Daniel this Christmas in Corrie