Home » World News » Millions are on the move in China, and Big Data is watching 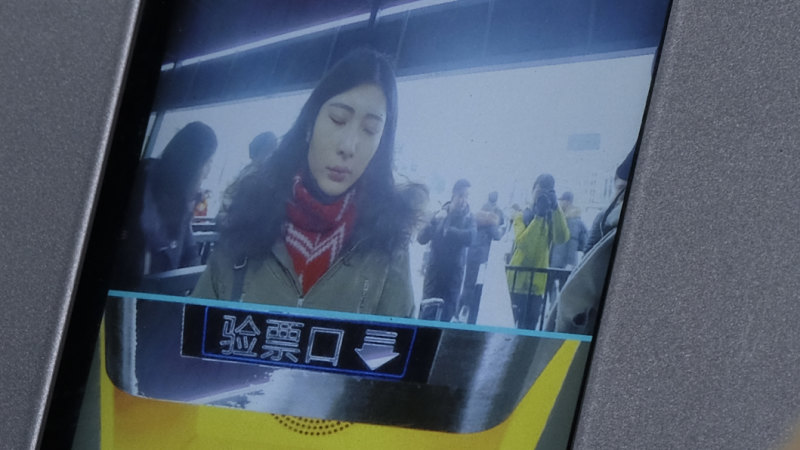 Millions are on the move in China, and Big Data is watching

Beijing: At Beijing's high-speed railway station, there is confusion as city workers heading home for Spring Festival encounter a new machine where humans once checked tickets.

Hat off, scarf off, eyes ahead – despite the bitter winter chill, China's facial recognition system 2.0 requires a clear image for its records. Passengers also put their national identity card in the machine. 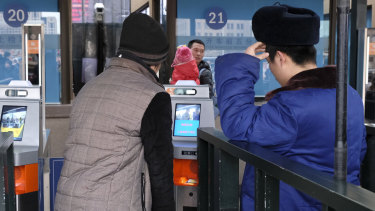 Train travellers are confronted by a new facial recognition system as they travel home from Beijing for Chinese New Year. Credit:Sanghee Liu

Dai Shanshan, deputy director of the Beijing Station, told the Beijing Evening News that a system in which multiple cameras simultaneously watch a face has improved the speed and accuracy of Facial Recognition 2.0, a major upgrade installed for the railway's peak season.

But passengers are not used to the machines, he said, and there had been high demand for assistance from railway staff, who remind people to remove smog masks and hats. 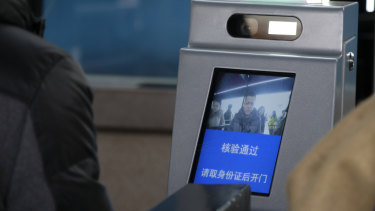 The screen displays “Verification is made. please open the gate after collecting ID card”.Credit:Sanghee Liu

The facial recognition system is another step up in surveillance, capturing faces for inclusion in vast databases to be mined by artificial intelligence algorithms.

While new to these Beijing residents, the facial recognition machines are pervasive at entrances and exits of train stations in the troubled western region of Xinjiang, part of a system to restrict the movements of the Uighur ethnic minority.

As the technology is rolled out across China's major cities, state media is highlighting its convenience, promising shorter queues, and "safety" benefits. 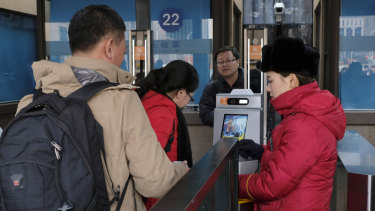 Missing people could be found during Spring Festival if a face matches a database, it has been reported. Yet missing children would be unable to use the machines – they can't be used by anyone under 1.2 metres tall.

On the high-speed train passengers are warned to behave, or else rule-breaking will be recorded in their social credit file.

The Global Times, a nationalist newspaper, describes another type of face that could be matched to a database: "The technology can also help track those who break the law via a blacklist, and monitor and alert authorities … the technology helps quickly deploy security to the scene." 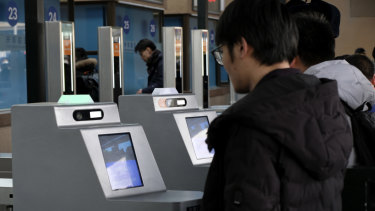 Passengers are warned over the railway station’s PA system to behave or their behaviour will be recorded on their social credit file.Credit:Sanghee Liu

Human Rights Watch's China director, Sophie Richardson, says "states always resort to public safety issues when they are collecting data", but China is embarking on a "pan-opticon hoovering up of all the data you can find", even though it does not have a big problem with violent crime.

Instead, it appears the high-speed rail network that so many Chinese rely on to travel long distances for business or holidays has become the fulcrum of the Chinese state's experiment in harnessing digital technology to not only watch its citizens, but also to shape their behaviour.

On the high-speed train from Beijing to Shanghai, passengers are warned over the public announcement system to behave, or else transport rule-breaking will be recorded in their social credit file. 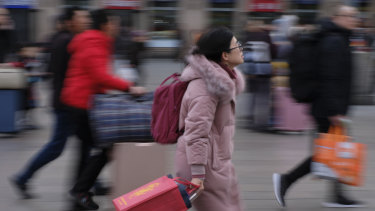 Smoking in a no-smoking zone, disturbing public order or fare evasion could result in offenders being barred from future train travel, the announcement says.

"In order to avoid affecting personal credit, please consciously abide by relevant regulations and maintain the station and train operational order," it warns.

It is due to be unveiled nationally next year, but piecemeal trials to link data from 44 government departments have been expanding rapidly, with a focus on punishing tax evasion, fraud, fine defaulters and unpaid court debts.

China's National Development and Reform Commission, which is overseeing the social credit project, said it had collected 30 billion pieces of information by December.

Within a few months of airlines being added to the social credit system, more than 5000 people were banned from future air travel for their conduct on planes, most for carrying dangerous goods, a quarter for trying to use false ID, and some for their behaviour in the cabin.

Only 1417 people managed to get off the blacklist in 2018 and have their travel rights restored, after paying the due tax, late fees or fines.

Beijing's city government recently flagged it would expand its city social credit system so that "untrustworthiness in one area is met with restrictions everywhere, making it hard to move an inch".

Richardson says: "It is very important for people to understand there are no privacy rights in China. Large amounts of data are being collected without people knowing it is collected, so the ability to give consent, which is vital, is never an option."

She says it was "not clear to us just how integrated and functional the data collection strategies are … but we should be concerned about the state's intent".

In Guangzhou, subway commuters who sign up for a new facial recognition system and have a "good travel record" can avoid queues for luggage checks and use a special biometric gate.

But what happens when the technology fails? The first trial of facial recognition at Beijing station in 2016 found the system couldn't recognise a person with a recently shaven head, plastic surgery or make-up that made them looks 10 years younger.

The pan-opticon might not yet be perfect, but it is everywhere, and learning fast.