Microplastics have been found in air, water, food and now … human blood

Plastic – it's in your blood. And we know so because researchers have just found microscopic plastic particles flowing in our bloodstream for the first time.

Previous research had found we inhale and ingest enough microscopic pieces of plastic to create a credit card each week. But until now, scientists didn't know whether those particles were entering the bloodstream.

"It's the first step for proper risk assessment … (of) the internal concentrations of plastic particles," Dick Vethaak, professor of ecotoxicology, water quality and health at Vrije Universiteit Amsterdam, The Hague, the Netherlands, told USA TODAY. Vethaak is among the authors of a study published Thursday in the peer-reviewed journal Environment International.

Plastic particles were found in the blood of more than three-fourths (17 out of 22) of the Netherlands-based donors who participated in the study. Of course, knowing there is plastic in the blood of many people just leads to more questions for researchers to tackle.

What lies beyond our solar system? Over 5,000 planets including 'super-Earths,' NASA says

The great unmasking: COVID is 'not over,' but CDC says most of America don't need masks. Should you listen?

"We have to find out where are these particles traveling. Do they accumulate in certain organs?" Vethaak said. "Are (accumulations) sufficiently high enough to trigger responses leading to diseases?"

Related video: In 2019, WHO said bacteria in water was a bigger worry than microplastics

Plastic particles can enter the body through your food and drink, the air you breathe – there are microscopic plastic bits flying around in the air – and even from the rain.

Finding signs of plastic in the blood

Researchers analyzed subjects' blood samples for traces of the presence of different polymers, which are the building blocks of plastics. Most prominent was polyethylene terephthalate (PET), a common type of plastic used in making drink bottles, food packaging and fabrics, and even lip gloss.

What's everyone talking about? Sign up for our trending newsletter to get the latest news of the day

The second most commonly found plastic in the samples: polystyrene, used to make a wide variety of common household products including disposable bowls, plates and food containers, and what we call styrofoam.

The third most likely plastic found in subjects' blood was polyethylene, a material regularly used in the production of paints, sandwich bags, shopping bags, plastic wrap and detergent bottles, and in toothpaste.

Polypropylene, used in making food containers and rugs, was also found in subjects' blood, but at concentrations too low for an accurate measurement. 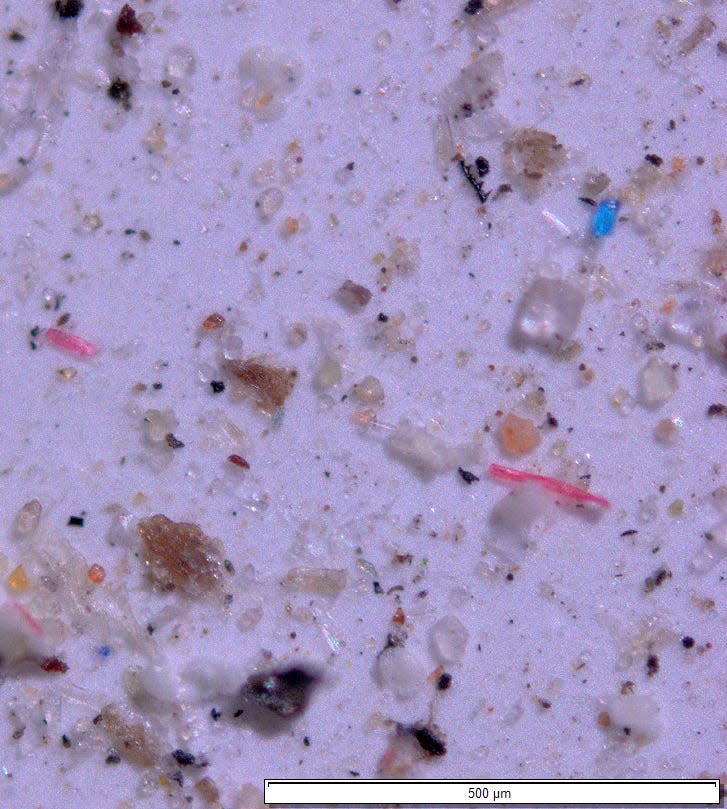 The overall concentration of plastic particles in the donor's blood averaged 1.6 micrograms, or one-millionth of a gram – the equivalent to one teaspoon of plastic per the amount of water in ten large bathtubs, researchers say.

That's not much, but researchers only searched for a few plastic polymers. And plastic particles may be in different concentrations in different parts of the body.

Researchers particularly wonder whether microplastics – or even smaller particles called nanoplastics – could affect the brain, digestive system and other parts of the body. Could they help cancers develop or grow?

"More detailed research … is urgently needed," Vethaak and other researchers say in a separate article published this week in the peer-reviewed journal Exposure and Health. "The problem is becoming more urgent with each day."

Microplastics: A problem that's not going away

That's because microplastics, a type of pollution, are literally everywhere, having been found from the bottom of the ocean to Mount Everest. We've known that fish have been ingesting them.

More foods including fruits and vegetables may contain microplastics, too. Previous research found that infants may ingest 10 times the amount of microplastics that adults do, based on a 2021 study comparing adult and infant feces. Babies could have higher microplastics exposures from bottles and baby toys, researchers suggest.

Microplastics will continue to spread because plastic production is only increasing, said Jo Royle, CEO of Common Seas, an organization targeting plastic pollution in the oceans. Common Seas, along with the Netherlands Organisation for Health Research and Development, commissioned the research. "We need to hurry up and invest in the research to be able to understand what threats plastics pose to human health," Royle told USA TODAY.

She said her blood, and that of Vethaak's, was analyzed and found to have plastics in the bloodstream but was not included in the published research. "To find this plastic in my blood, it is concerning," Royle said.

With research, "we can make informed choices," she said. "But there's a lot of steps that we can take each day to reduce our exposure to single-use plastics and particularly food and beverage packaging."

This article originally appeared on USA TODAY: Plastics found in human bloodstream by researchers in the Netherlands