Met Police is placed in SPECIAL MEASURES after catalogue of scandals

The Metropolitan Police was today placed in special measures for the first time ever due to concerns about ‘serious or critical shortcomings’ following a wave of scandals that blighted Cressida Dick’s tenure.

What does ‘going into special measures’ mean?

The HMICFRS has two stages of its monitoring process for police forces – the ‘scanning’ phase and the ‘engage’ phase.

The scanning phase ‘uses data and information from a range of sources to highlight poor or deteriorating performance and identify potential areas of concern’.

At this point, forces develop an ‘improvement plan’ to address concerns and must meet with inspectors regularly to ensure improvements are being made. It may also be given specific targets.

The Met has been escalated straight to ‘engage’, suggesting HMICFRS is particularly concerned about its performance.

Her Majesty’s Inspectorate of Constabulary and Fire & Rescue Services also mentioned the ‘racially profiled’ stop and search of the Team GB sprinter Bianca Williams, 26, who was hauled from her car alongside her husband.

It followed the revelation of racist WhatsApp messages exchanged by officers at Charing Cross Police Station and the strip-search of a 15-year-old schoolgirl known as Child Q, which prompted fresh claims the force was institutionally racist.

Other scandals included the jailing of two officers for taking photos of the corpses of murdered sisters Nicole Smallman and Bibaa Henry, and Operation Midland – the disastrous probe into fake claims of VIP paedophilia.

The force was also heavily criticised for failing to stop Extinction Rebellion protests from shutting down London, with videos of officers dancing with protesters sparking anger.

Today’s news is a humiliation for the Met, which is now officially ranked among Britain’s failing forces.

Dame Cressida retired as commissioner in February when London Mayor Sadiq Khan withdrew his support, saying he did not believe she had the ability to restore confidence.

The force will now be put under enhanced scrutiny, required to report to inspectors more regularly and could be asked to meet specific targets.

Home Secretary Priti Patel said: ‘I expect the police to get the basics right. It is clear the Metropolitan Police Service is falling short of these expectations which is why I support the action that HMICFRS has taken today to highlight their failings – and I expect the Met and the London Mayor to take immediate action to begin addressing them.

‘The process to recruit a new Commissioner is well underway and I have made clear that the successful candidate must demonstrate sustained improvements in the Metropolitan Police Service in order to regain public trust both in London and across the country.

‘The new Commissioner will need to deliver on the public’s priorities for the police – making our streets safer, bearing down on crime and bringing more criminals to justice, while continuing to recruit thousands of new officers to protect local communities.’

A HMICFRS spokesman said: ‘We can confirm that we are now monitoring the Metropolitan Police Service through our Engage process, which provides additional scrutiny and support to help it make improvements.’ 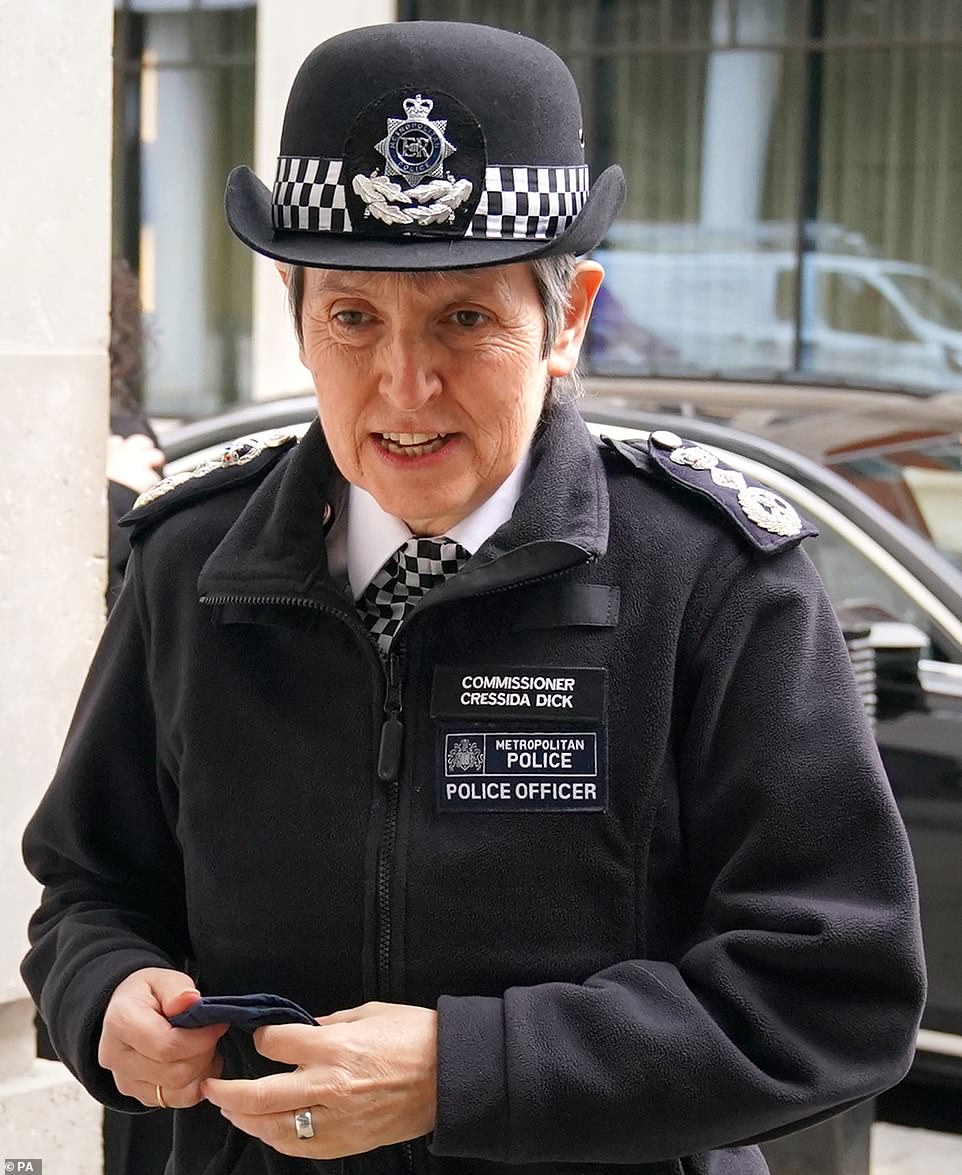 The Met’s scandal ravaged former commissioner, Cressida Dick, who stepped down in February after Sadiq Khan said he no longer had confidence in her 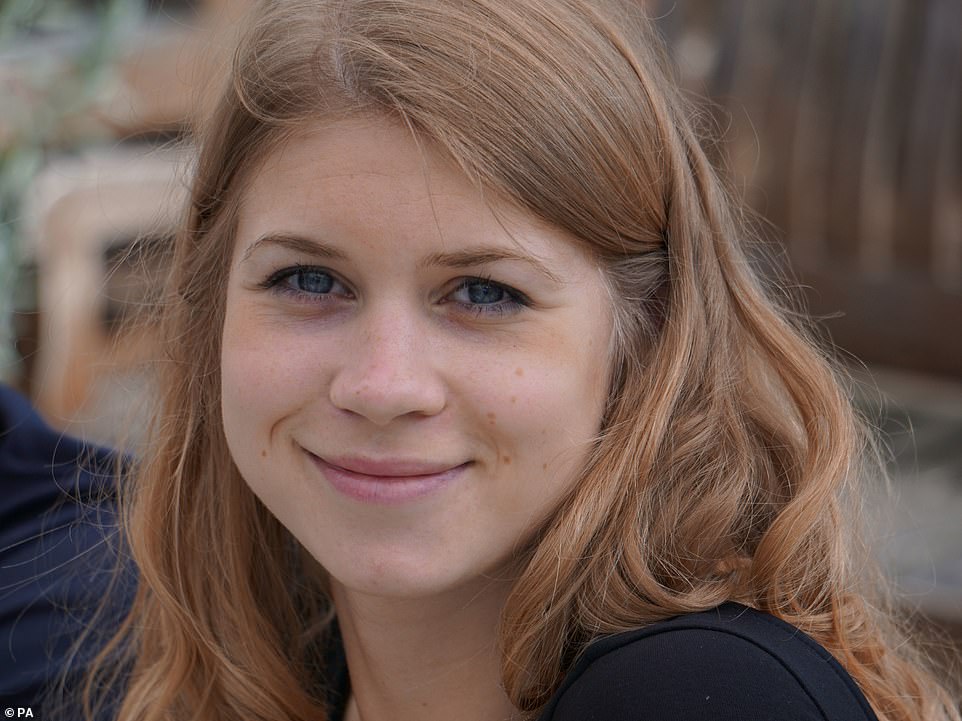 The brutally horrific murder of Sarah Everard in March 2020 by serving Met firearms officer Wayne Couzens went from disastrous to worse for Dame Cressida. She faced a clamour to quit after he was exposed as the killer.

It then emerged Couzens had not been vetted properly and Met officers had failed to investigate after he was reported flashing women days before the murder.

But perhaps the worst moment for the Commissioner was her officers’ heavy-handed policing of a vigil for the murdered woman at Clapham Common in South London. 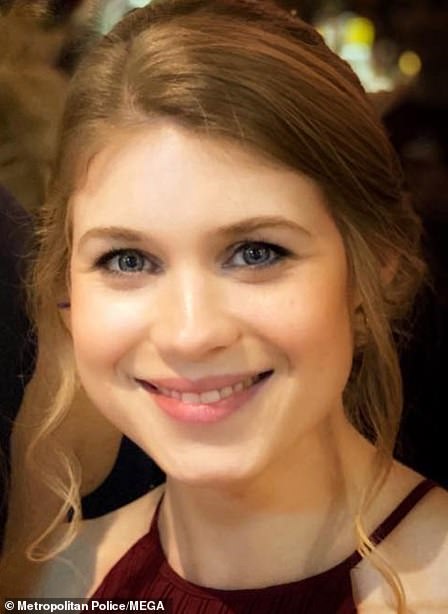 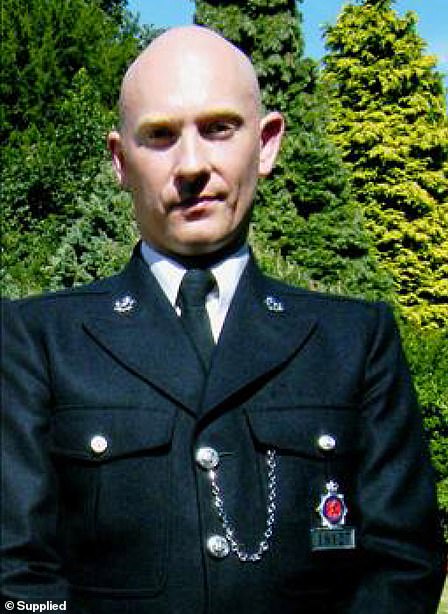 Photographs of protesting women being pinned down by arresting officers who cited Covid restrictions on gatherings were published around the world, sparking condemnation.

When Couzens was convicted, it was dubbed Scotland Yard’s ‘darkest day’. Dame Cressida stood outside the Old Bailey and humbly admitted the murder had corroded trust in the police and brought ‘shame’ on her force.

Five years later, when the embarrassing operation began seriously unravelling, she refused to allow an inquiry into the conduct of officers involved.

This was despite former High Court judge Sir Richard Henriques revealing how officers had used false evidence to obtain a search warrant for the raids. Dame Cressida said that an inquiry would be ‘completely improper’. 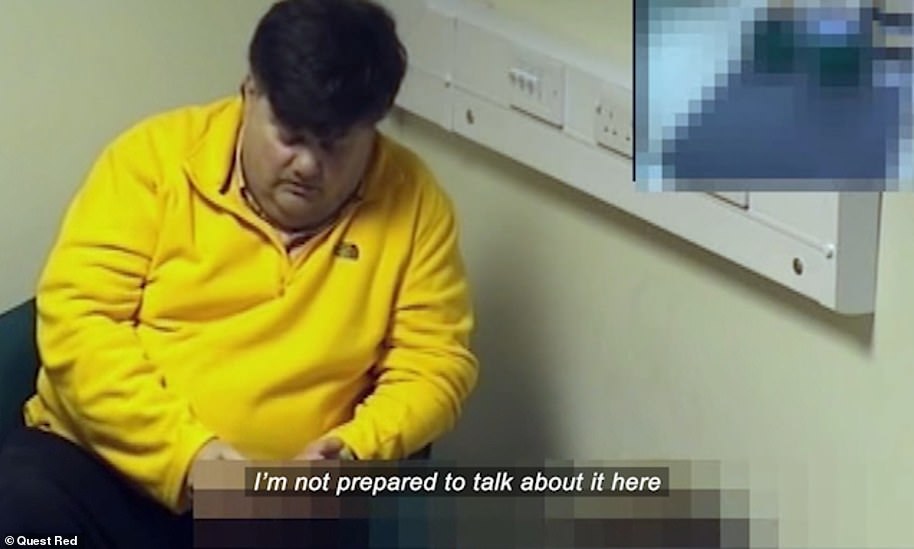 Dame Cressida was also slammed by the families of victims of VIP paedophile ring fantasist Carl Beech, whose spurious allegations were investigated by police – ruining the lives and reputations of those he accused

A report in 2020 found the Metropolitan Police was more interested in covering up mistakes than learning from them.

The Hampshire home of the Queen’s confidant, Lord Bramall – who was also former head of the Armed Forces – had been invaded by police with search warrants in the early hours on the basis of spurious allegations of abuse by paedophile Carl Beech, a palpable fantasist.

After the Daily Mail exposed him, Beech was jailed. Before he died, D-Day hero Lord Bramall told his son Nick that ‘he had never been so mortally wounded, even in battle’.

Former Tory MP Harvey Proctor, who received a substantial payout after his life was ruined by the disastrous paedophile inquiry, last night expressed his delight at Dame Cressida’s downfall.

He was among seven high-profile victims of the Met – including Baroness Lawrence, whose son Stephen’s 1993 murder investigation was botched by racist officers – who last year came together in a Mail interview to accuse Dame Cressida of having ‘presided over a culture of incompetence’.

In December last year, two Scotland Yard officers who took photos of the bodies of two murder victims were jailed.

The sisters who died – Nicole Smallman, 27, and 46-year-old Bibaa Henry, were black and there were accusations of racism. 2021 was also the force’s worst ever year for teenage killings, with 30 deaths. 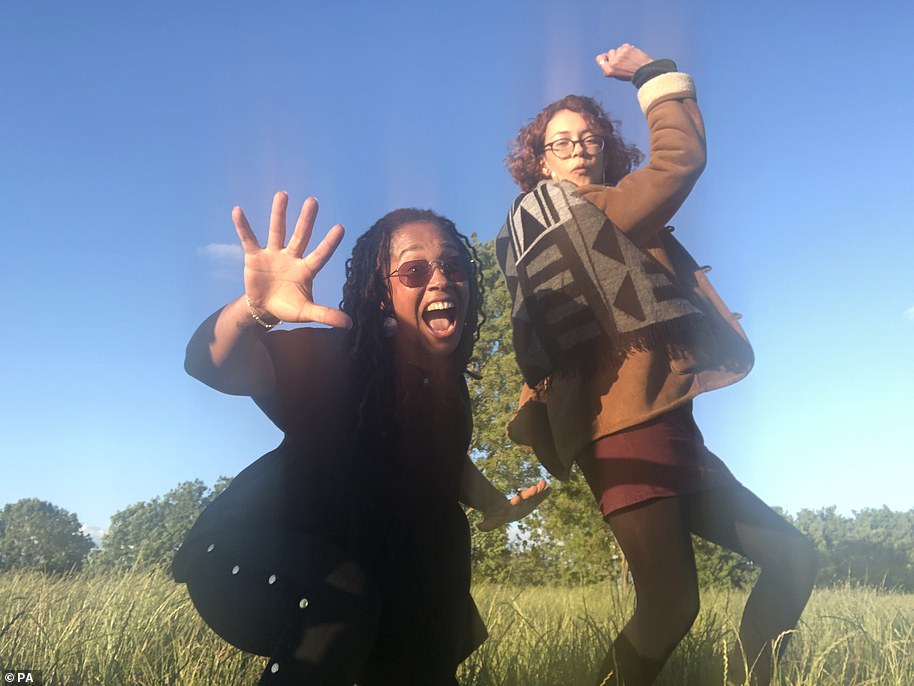 Bibaa Henry, 46,  and Nicole Smallman, 27, who were stabbed to death in Wembley last year 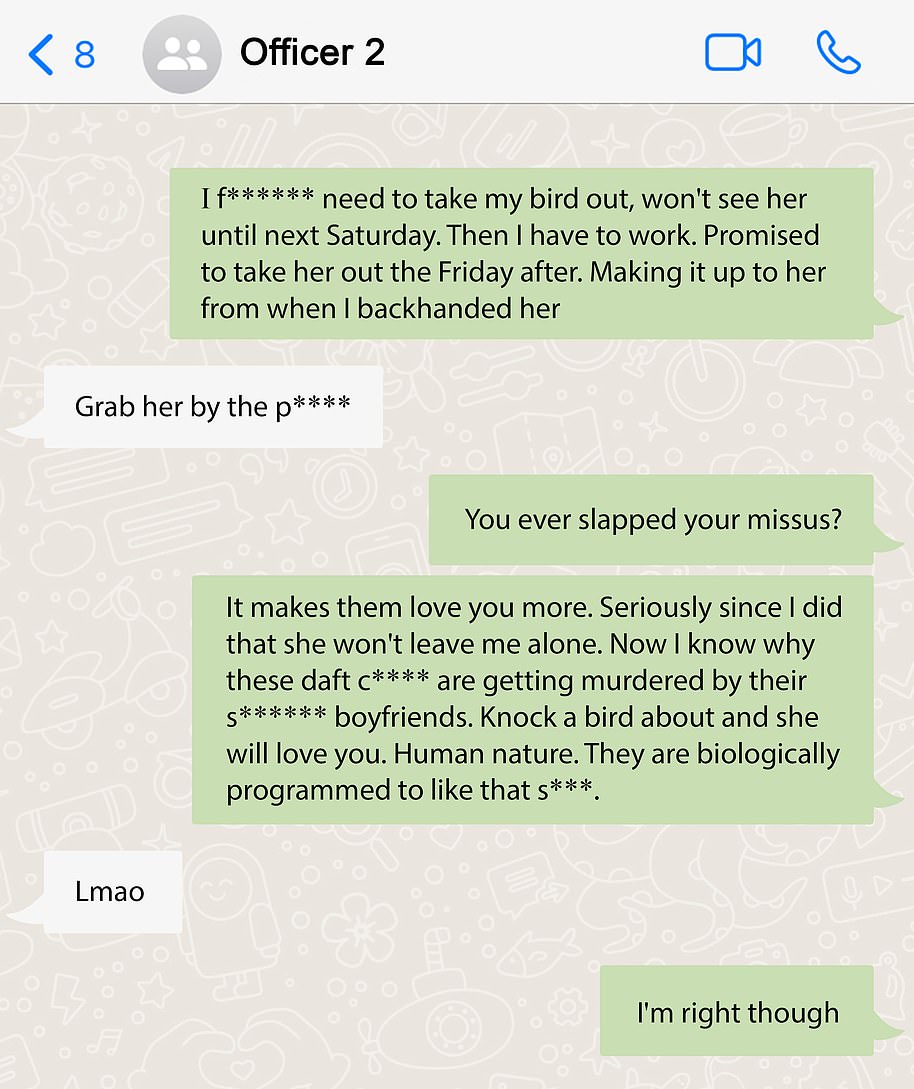 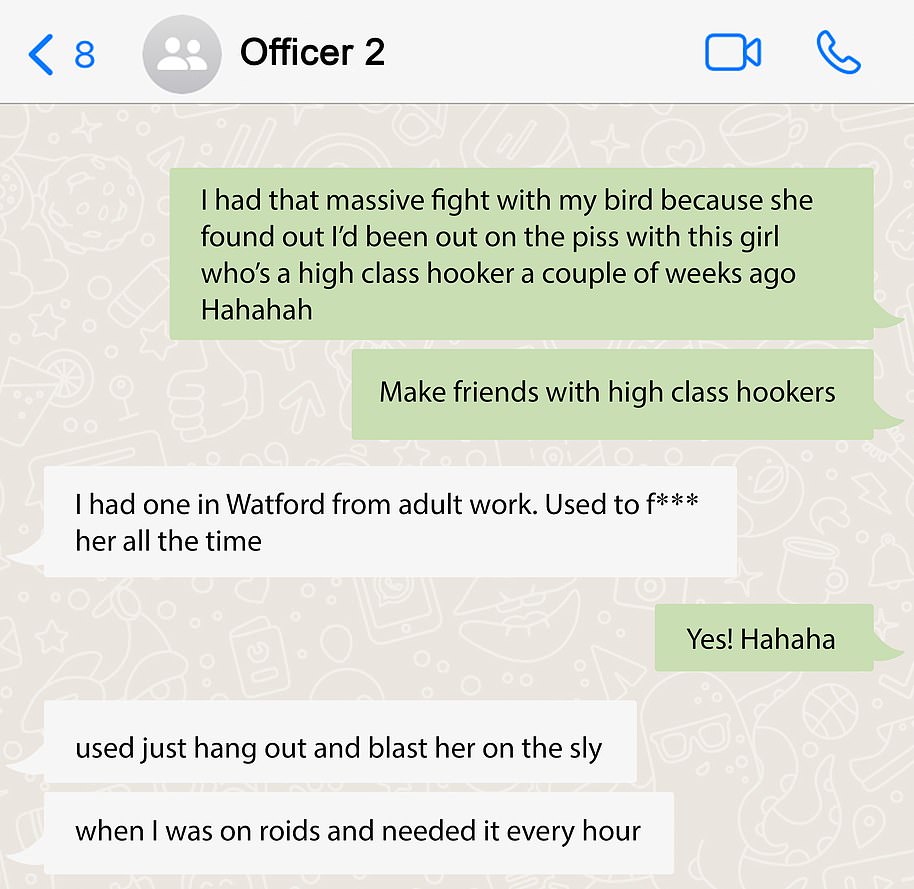 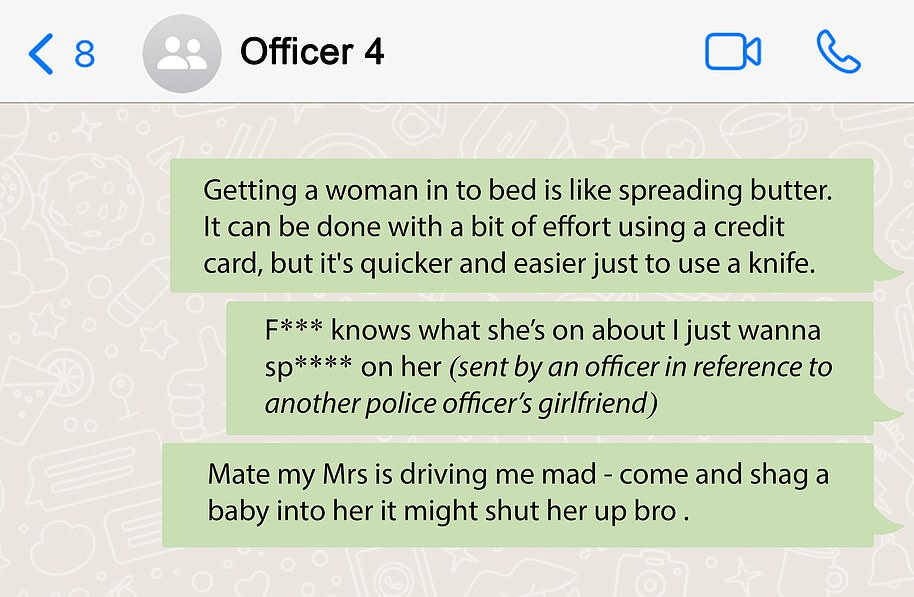 Some 14 officers were investigated as a result, with two found to have a case to answer for gross misconduct.

One was sacked and another resigned before he would have been dismissed. Another two had already left, while in some of the other cases the Independent Office of Police Conduct found ‘no further action should be taken’.

Incredibly, nine officers kept their jobs and two were promoted – but their sickening WhatsApp messages exposed an ongoing culture of racism, sexism and bullying.

It appears this sickening episode was the straw which finally broke the back. For, by the end, it was clear that confidence in the police chief had gone.

In 2019, the force was widely condemned for its ‘light-touch’ policing of Extinction Rebellion protests, which blocked several key areas of London.

Under her watch, career eco-activists from XR and its off-shoot Insulate Britain were given free rein to cause mayhem.

Ambulances were stopped from getting through, while businesses and workers were forced to halt their activities.

A low point came when police were filmed asking road-blocking protesters if they needed anything – rather than just arresting them.

Perhaps the most jaw-dropping condemnation of Dame Cressida came in June of last year when an official report described her force as ‘institutionally corrupt’.

And far from blaming the fiasco on a predecessor, it concluded that she had personally placed ‘hurdles’ in the way of a search for the truth about the death of Daniel Morgan – a private investigator who was brutally murdered in a south London pub car park in 1987. 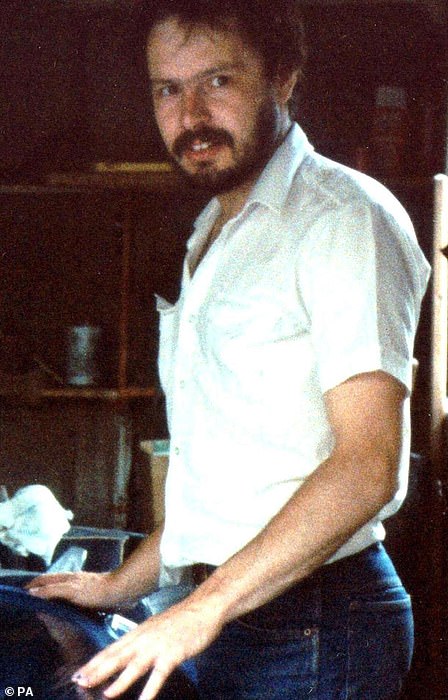 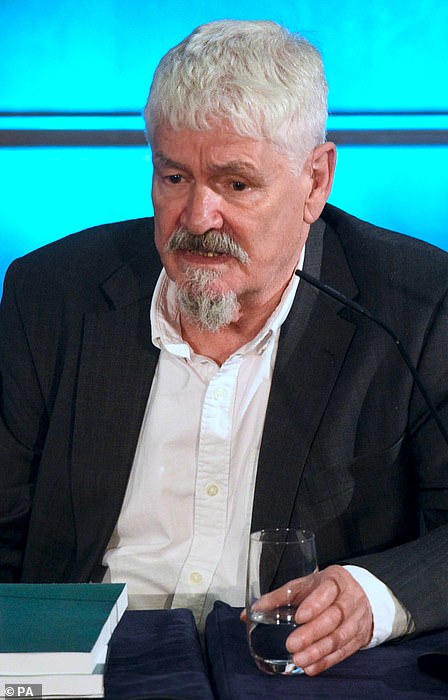 Daniel Morgan was investigating claims of corruption within the Metropolitan Police when he was murdered in 1987 – and the force failed him and his family ever since. His brother Alastair told the media that Cressida Dick should resign

Dame Cressida was accused of ‘obfuscation’ for thwarting the Morgan inquiry team’s attempts to access sensitive documents, leading to delays that cost the taxpayer millions. The report by Baroness O’Loan found that Scotland Yard was ‘institutionally corrupt’.

The Met has never found Mr Morgan’s murderer, but there were long-standing allegations of police corruption over the killing and the aftermath.

They all signed a letter to the PM demanding Dame Cressida’s resignation. Instead she clung on.