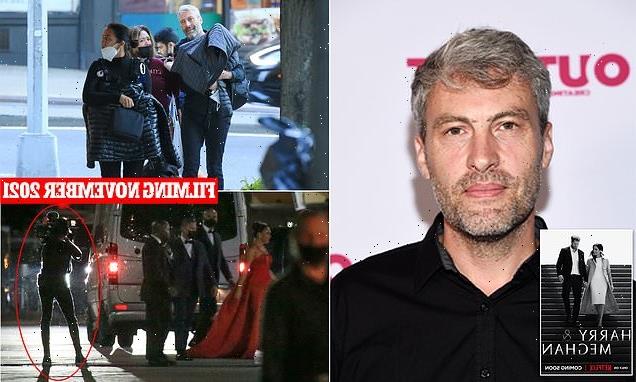 EXCLUSIVE: Filmmaker hired by Harry and Meghan to shoot their explosive documentary is mired in controversy – previous projects include Woody Allen’s alleged abuse of his children and Epstein’s madam Ghislaine Maxwell

Prince Harry and Meghan Markle’s cinematographer for their new bombshell documentary has a history of shooting controversial films, including a recent HBO docuseries about Woody Allen’s alleged abuse of his children, DailyMail.com can reveal.

Brooklyn-based cinematographer and director Thorsten Thielow, 43, shot scenes for Netflix docuseries, Harry & Meghan, which is being released in two parts, one today and the second on December 15.

The highly anticipated six-episode series promises to reveal the ‘truth’ about the couple’s split from the British royal family.

According to production credits, Thielow served as the director of photography for the project, which features never-before-seen footage from the early days of Harry and Meghan’s relationship as well as more recent scenes of the couple’s life behind closed doors.

The show is just one of many documentary-style films by the German-born cinematographer, who has helped shoot several other non-fiction projects about A-list stars and controversial figures in recent years. 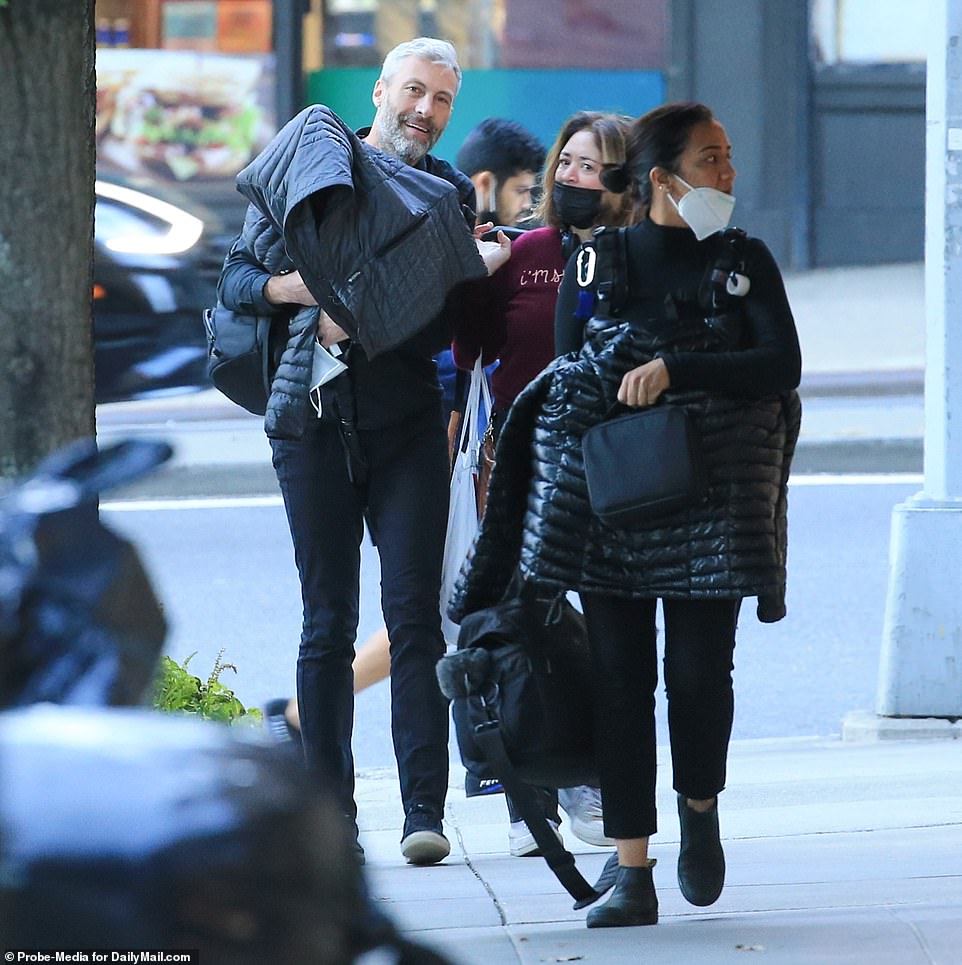 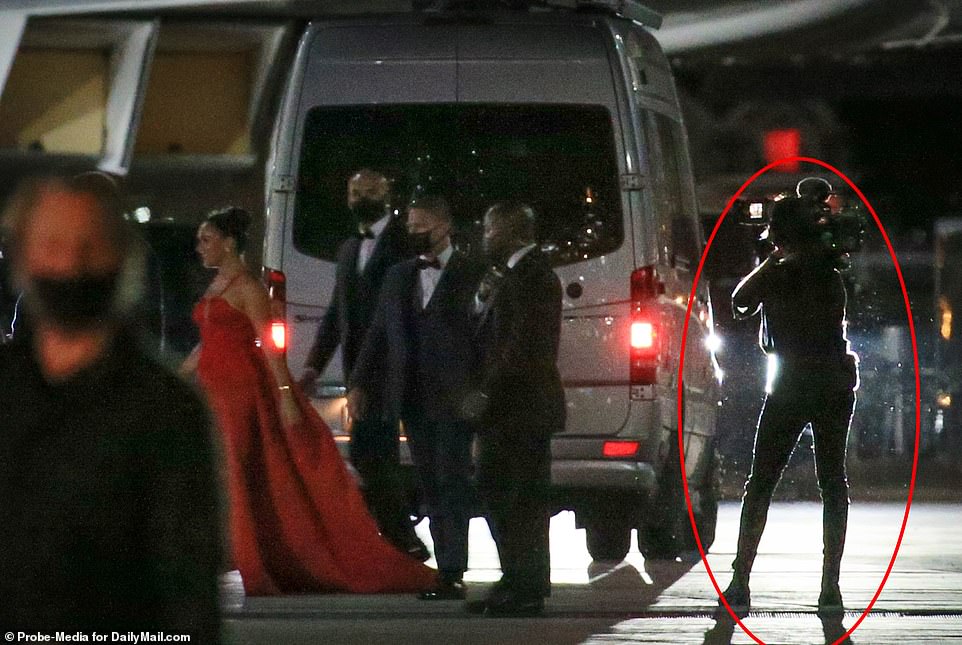 The cinematographer can be seen in exclusive DailyMail.com photos following the couple with his camera during their November 2021 trip to New York City

Among his other credits is 2020 film, Excuse Me, I Love You, a Netflix documentary about pop star Ariana Grande.

Thielow was also behind the camera for 2021 HBO miniseries, Allen v. Farrow, which explores the allegations of sexual abuse against Woody Allen by his own children. 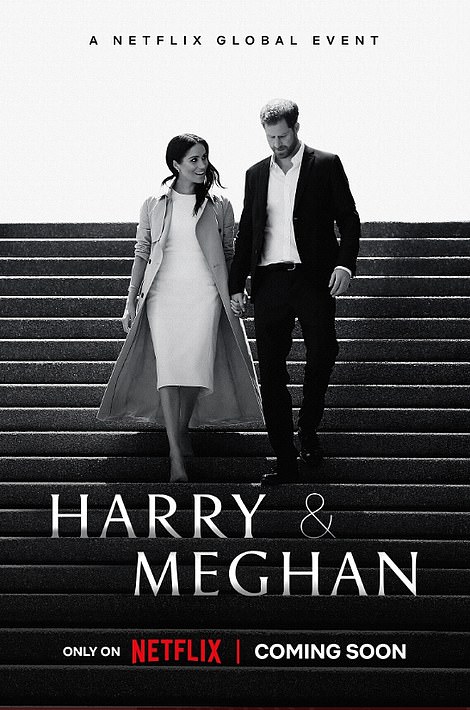 More recently, and in perhaps a troubling sign for Buckingham Palace, he served as a cinematographer on Ghislaine Maxwell: Filthy Rich, the 2022 Netflix docuseries about Jeffrey Epstein’s madam.

Thielow, who has won the Grand Jury Prize at movie festival Sundance, appears to have a lot of experience in making films about challenging family issues and prominent celebrities, according to his filmography.

Teaser clips of the former royals’ Netflix series show he used a wide range of cameras to shoot Harry and Meghan, including mobile phones and sit down interviews with a film crew.

Thielow was also seen following Meghan and Harry around with a film crew in exclusive DailyMail.com photos during the couple’s trip to New York last November.

He was snapped bundling camera equipment hidden under coats and bags out the couple’s high-end residence at 860 United Nations Plaza.

The production crew was later seen setting up and filming Harry and Meghan at a veterans’ gala at the Intrepid Museum later in the trip.

Pictured by Thielow’s side at the time was Liz Garbus, the director of the film project.

Like Garbus, Thielow appears to have a similar political outlook to Harry and Meghan and has worked on a number of films which were critical of Donald Trump.

Some of his more popular recent films had also ruffled some feathers at the time of their release.

Among the claims in Allen v. Farrow was that director Woody Allen – who infamously married his adopted daughter Soon-Yi Previn – had touched his other daughter Dylan Farrow’s private parts when she was just seven. 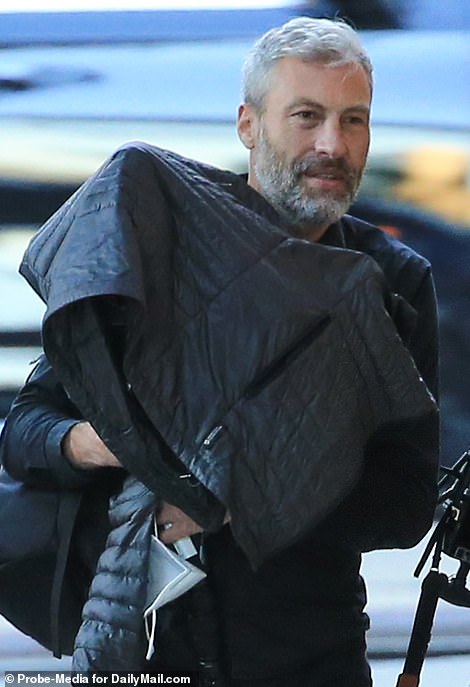 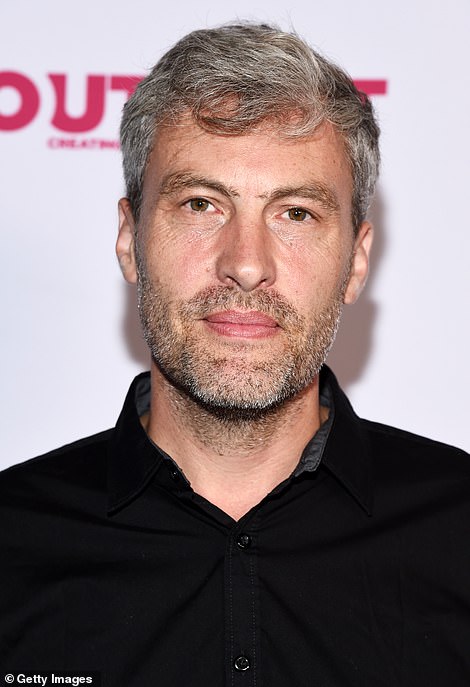 According to his filmography, Thielow, who has won the Grand Jury Prize at movie festival Sundance, has quite a bit of experience with shooting films about challenging family issues and documentaries involving A-list celebrities

It led to widespread revulsion against Farrow who claimed the film was a ‘hatchet job.’ 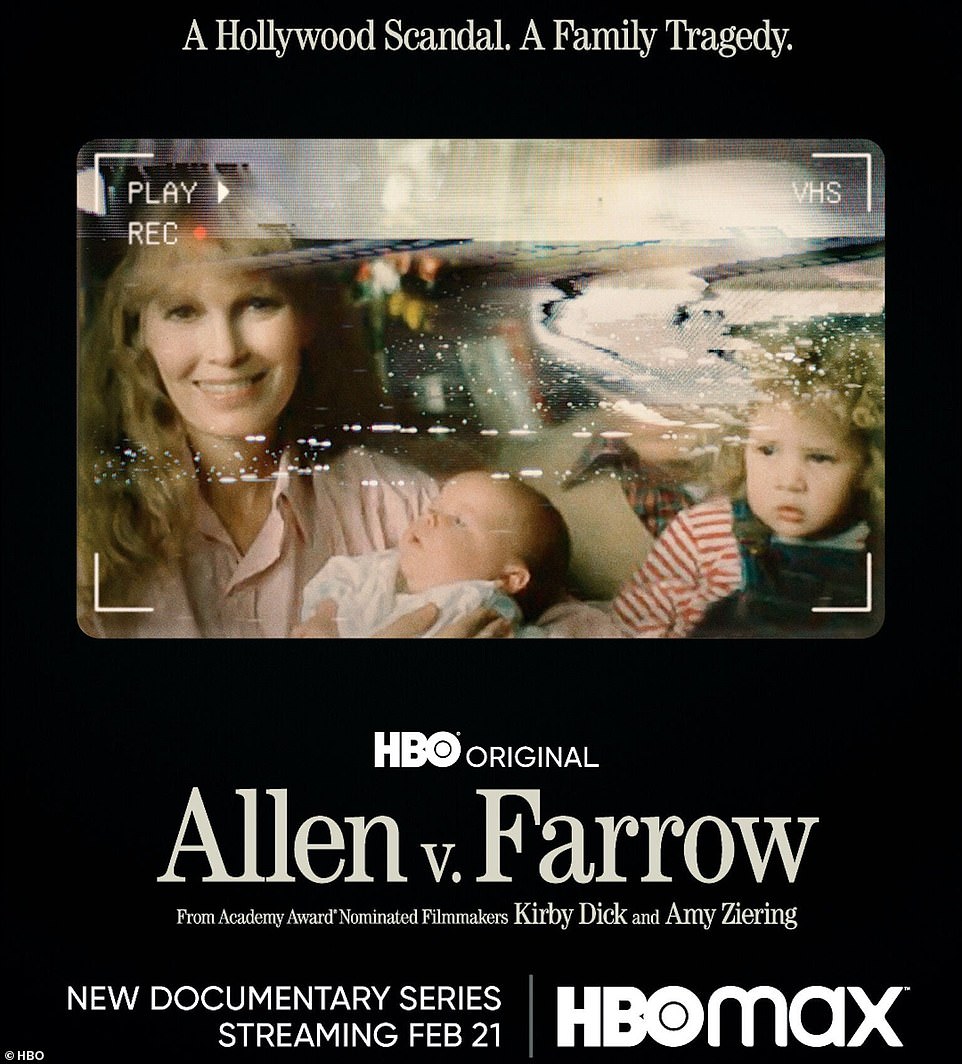 Thielow’s previous works also include, Allen v. Farrow, the 2021 HBO docuseries about allegations of abuse against director Woody Allen by his own children 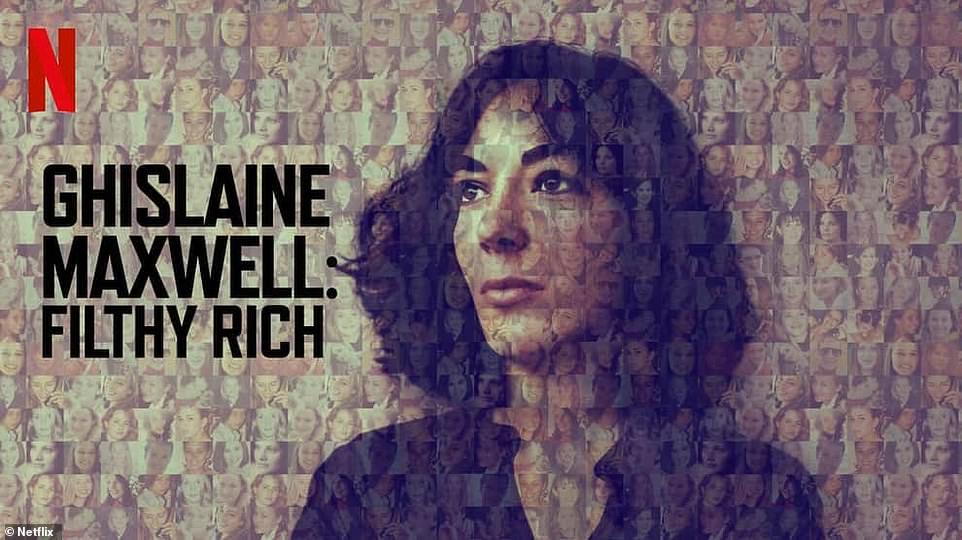 As for his latest project involving Harry and Meghan, the documentary had caused waves before it even aired, reportedly sparking fears in Buckingham Palace that it could deepen divisions between the prince and his family.

Insiders have claimed that the documentary is a ‘declaration of war’ and sources close to Harry’s brother Prince William have likened the Sussexes to The Kardashians.

William and Kate’s trip to Boston last week, their first visit to the US in eight years, was overshadowed by the first trailer for the Netflix series, which was released on Thursday.

The dramatic preview clip of the show feature scenes of Meghan crying, while Harry explains how he had to do ‘everything’ to protect his family.

In a second trailer, Christopher Bouzy, a tech entrepreneur and a long-time supporter of the couple, is heard saying the pair’s treatment is ‘about hatred, it’s about race’.

Harry also claims that stories about them were planted in the press, calling it a ‘dirty game’.

The Duke and Duchess of Sussex are seen in the back of a car while Meghan’s voiceover reads: ‘I realized no one is going to protect you’. 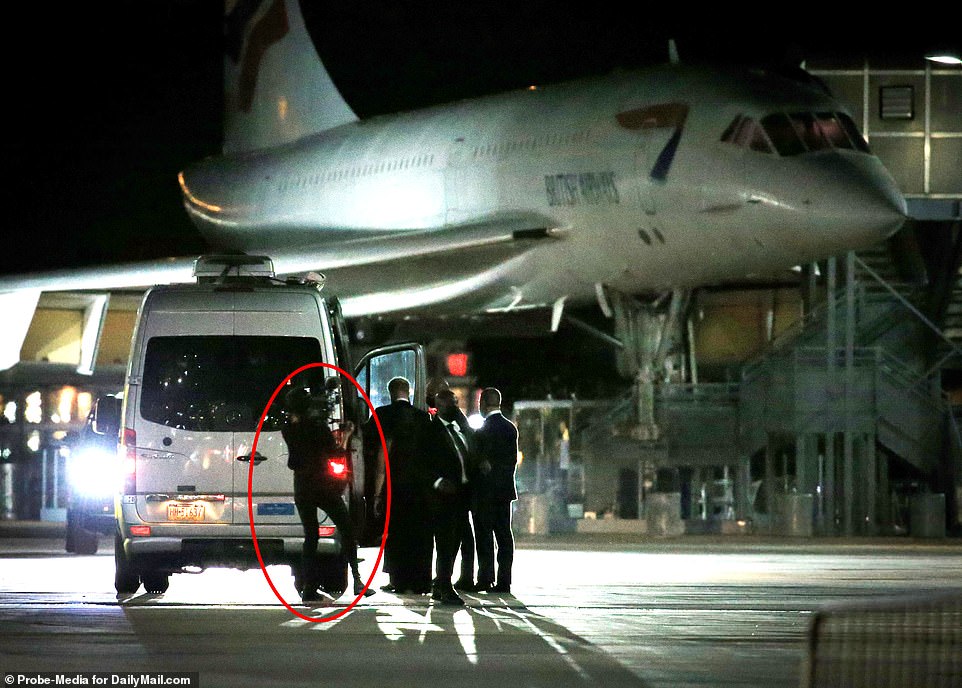 Prince Harry and Meghan Markle are photographed in New York last year. The pair had a three car convoy involving two Range Rovers and one Cadillac Escalade. At least 6 security detail are protecting them. Security help each other with their suits as a film crew film them leaving to head to the USS Intrepid where they can be seen arriving in their giant grey bus 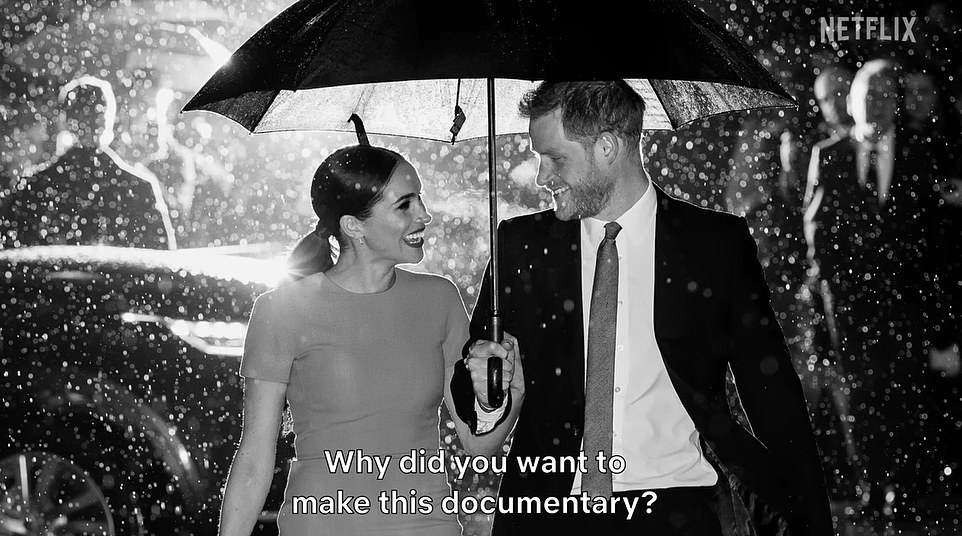 The trailers for Harry and Meghan’s Netflix documentary were given the thumbs down by more than 400,000 people

In the teaser clip, the Sussexes discuss how the public opinion of Meghan rapidly changed 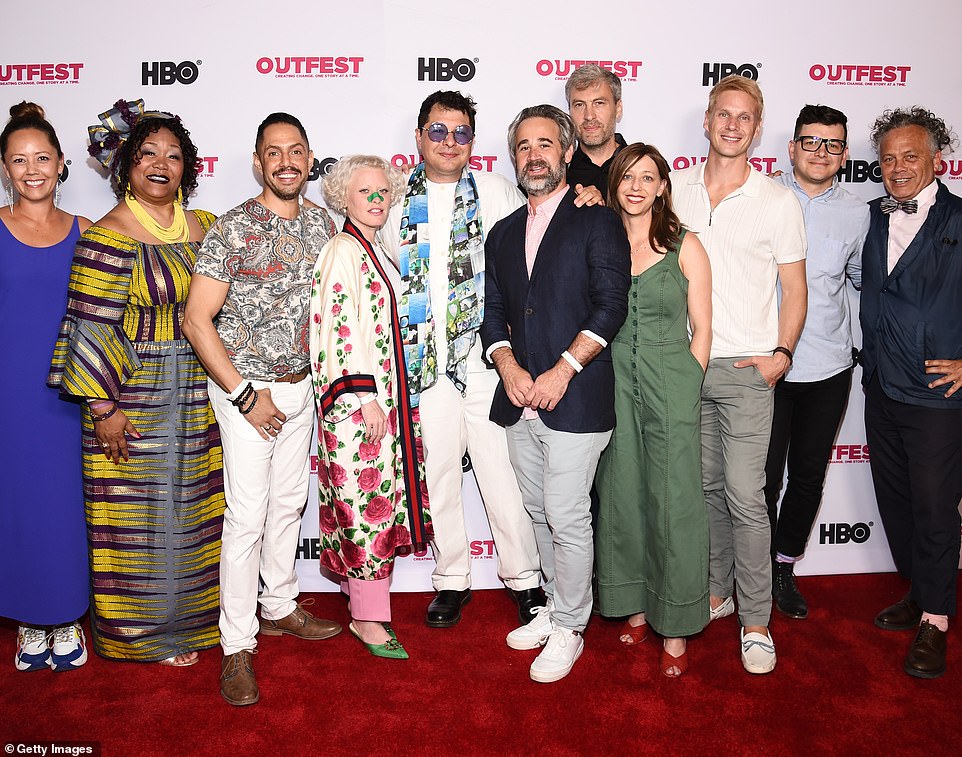 Netflix have said the show is an ‘unprecedented six-part documentary series that explores the span of their relationship’.

This includes ‘from the early days of the couple’s courtship to the challenges and controversies that prompted them to step back from the royal family.’

The streaming giant said: ‘The series includes interviews with family and friends who’ve never spoken publicly about the couple’s relationship before, as well as historians and journalists who dissect how media influenced Harry and Meghan’s relationship with the royal family and the Commonwealth at large.’

Harry’s memoir, titled Spare, is also due to be released in January having reportedly been pushed back from November.

He is said to have had to make changes after the death of his grandmother, Queen Elizabeth II.