Megan Thee Stallion is telling her side of the alleged shooting involving Tory Lanez.

The "Savage" singer, 27, gave her first TV interview on the topic to CBS Mornings's Gayle King on Monday. She shared her version how the July 2020 shooting played out — after a pool party at Kylie Jenner's Hollywood Hills mansion in Los Angeles — and explained why she initially lied to police about what happened.

Megan (real name: Megan Pete) had been at Jenners all day and was ready to leave, but Lanez (real name: Daystar Peterson) — who allegedly shot Megan in the ankle — wasn't, leading to a disagreement. The drama continued in the car as they left along with her now former best friend Kelsey Nicole and Lanez's driver/bodyguard.

"I never put my hands on anybody," Megan said. "I never raised my voice too loud. This was one of those times that it shouldn't have gotten this crazy."

But it did. Megan said by the time they were all in the car, the argument didn't even involve her, it was between the others. She asked the driver to stop, announcing, "'I'm done with this,'" and she got out. However, they asked her to get back in the car and when she did, the arguing escalated. She asked the driver to stop a second time and when she got out again is when she claimed Lanez shot her.

"All I hear is this man screaming. He said, 'Dance, b****,' and he start shooting," said Megan, who was still in her bathing suit and a coverup from the party. "I'm just like oh my god. He shot a couple times" out of the car at her. 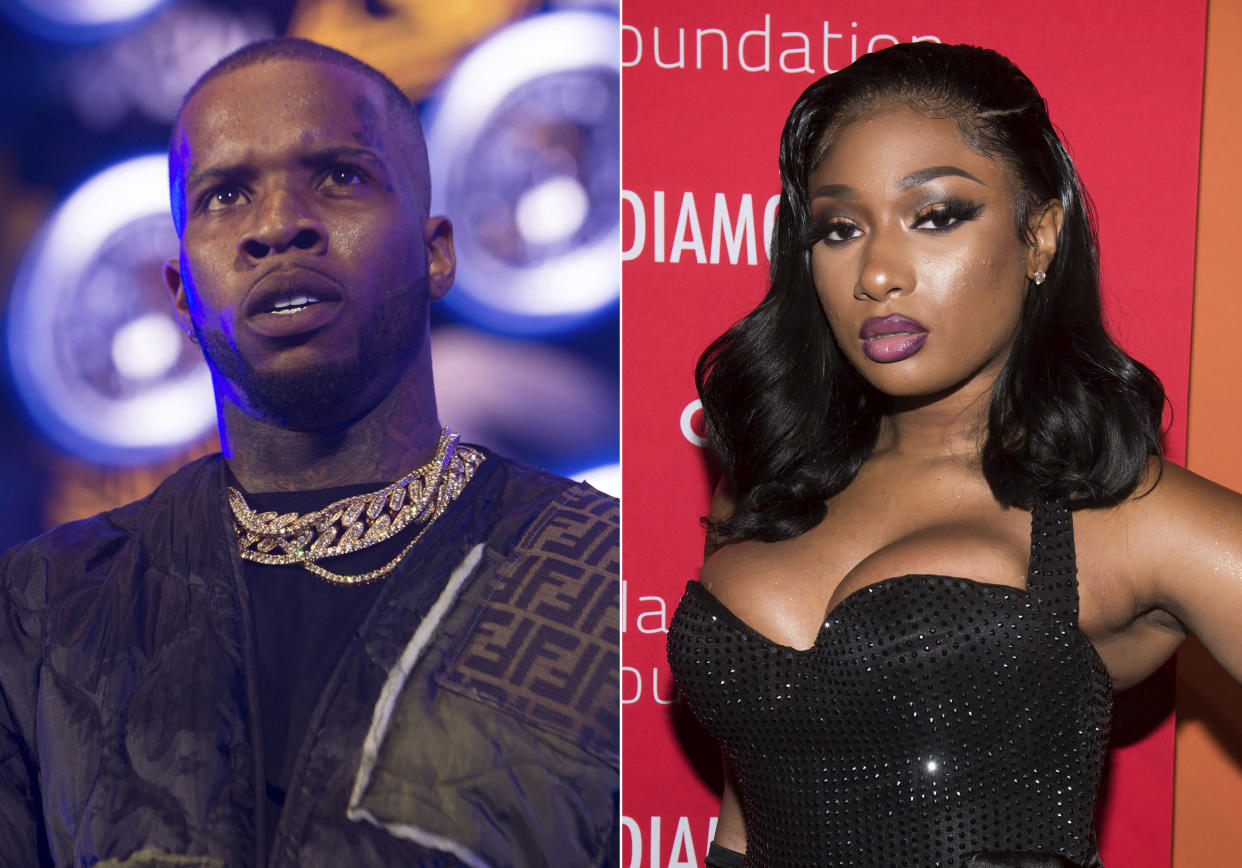 Megan said she was "really scared" to move, fearful she would be killed. She felt as if she had been hit, but wasn't sure with the adrenaline pumping.

"I look down at my feet and I'm like … I'm really bleeding," she recalled. She dropped to the ground and crawled into someone's driveway in disbelief that her good friend shot her.

She claimed that as this happened, Lanez apologized and begged her and Kelsey not to tell anyone, offering them $1 million. She said what she really wanted at that time was Lanez's help as she was bleeding.

Someone heard the gunfire and called police, who arrived — via police helicopter — and swarmed the car. It was right after the death of George Floyd and #BlackLivesMatter was at the forefront, and Megan said she was scared about what may happen when they came on the scene.

"We're all about to die," is what she thought as police surrounded them. "The George Floyd incident had just happened… There's a hot gun in the car. I'm bleeding. I've been shot. They're about to kill somebody. Something bad is about to happen."

She said she was thinking, "I didn't want them to kill any of us," when police asked what had happened, so she said she lied and said she stepped on glass.

The truth came out after police took Megan to the hospital and the doctor said in front of the officers, "'You know you got bullets in both of your feet.'" CBS reviewed the medical report, which stated she was shot. Major fragments were removed but tiny fragments remain to this day.

CBS also obtained a text from Kelsey, the other woman in the car, to Megan's security that said: "Help. Tory shot Meg."

Megan — who is no longer friends with Lanez, who she denied ever having a romantic relationship with, or Kelsey — spoke of the criticism she's faced over this, despite being the alleged victim. There are social media conspiracy theorists who claim she is lying about being shot.

"I don't think any of this is for them," she said of anyone who doubts her story. "It's for me, I know this happened to me. And I'd rather it play out in court and the facts come out … than me having to plead my case. I'm a victim. I'm the victim. I'm not defending myself against anything. Something happened to me."

Lanez pleaded not guilty and is facing one felony count each of assault with a semiautomatic firearm and carrying a loaded, unregistered firearm in a vehicle. The Canadian performer, who's currently out on bail, faces a maximum sentence of 22 years and 8 months in state prison.

His attorney Shawn Holley told CBS Mornings, "We look forward to addressing Ms. Pete's claims — including all its inconsistencies, discrepancies and omissions — in a court of law."