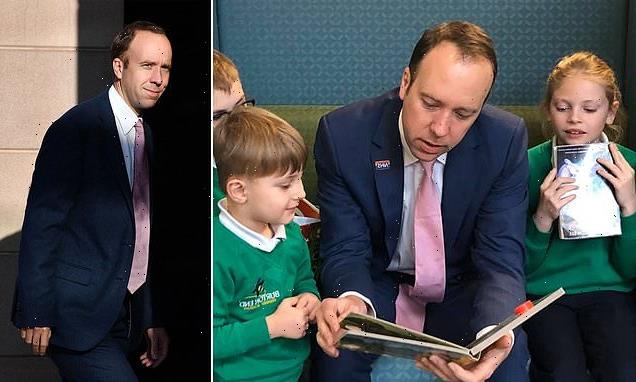 Matt Hancock, 43, reveals he kept his dyslexia secret for 20 years

‘I was saved by spell-check’: Matt Hancock, 43, reveals he kept his dyslexia secret for 20 years… after it was first spotted at university when his tutor exclaimed ‘you can talk, but you can’t WRITE’

Matt Hancock today revealed how he was saved by spell-check as he opened up on his dyslexia, which he kept secret for 20 years.

The former health secretary will today call for all children to be screened for the learning difficulty before they leave primary school in an address to the House of Commons.

Mr Hancock, 43, who was not diagnosed with dyslexia until he went to Oxford University, will introduce a Dyslexia Screening Bill as he calls on fellow MPs to back ‘vital’ reform.

Writing in the Daily Telegraph, Mr Hancock explained his own struggle with the difficulty, his embarrassment and how his university tutor told him that he could talk but he couldn’t write.

As a teenager, he had to re-learn how to do so by deconstructing sentences and visualising words as pictures. 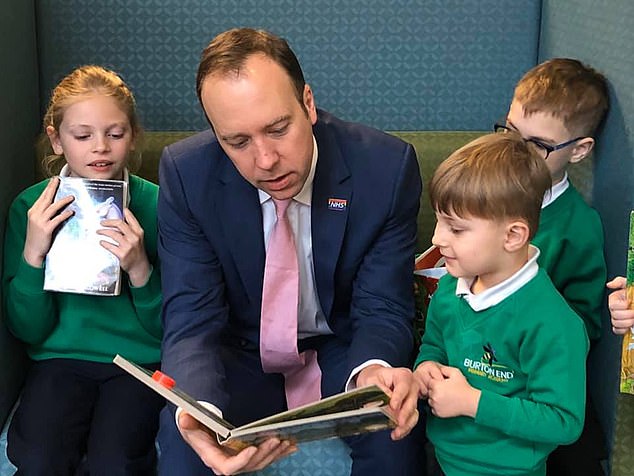 Matt Hancock, pictured reading with school children, has opened up on his struggle with dyslexia 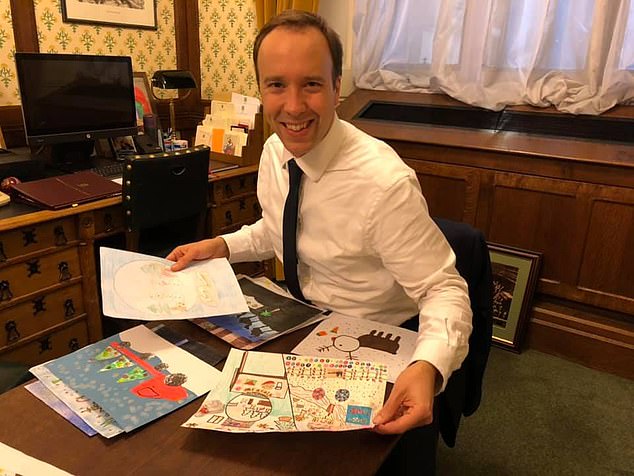 He wrote: ‘Even though after the diagnosis and training, I understood more and was able to read and write more confidently, I still held onto what I felt was the embarrassment of having dyslexia.

‘I made some bad mistakes. I misspelt words in important documents. I still struggled, and was only saved by the development of spell-check and later autocorrect. They were lifesavers.’

Unlike a learning disability, intelligence isn’t affected by dyslexia – a difficulty experienced to some degree by one in every 10 people in the UK.

Orlando Bloom, Richard Branson, Leonardo da Vinci, Walt Disney and Albert Einstein are among some of the most famous people to struggle with dyslexia.

Mr Hancock added that those who cannot read or write properly are more likely to be unemployed and involved in crime.

‘Simple early screening and education would go a long way towards helping dyslexics into the workplace and out of the cycle of crime, and be so valuable to businesses who can make the most of all that potential,’ he wrote.

Mr Hancock added: ‘I look forward to making the case to the House of Commons for why this reform is so vital.

‘I welcome the new Education Secretary’s recent commitment to a White Paper tackling illiteracy. I will tell my good friend Nadhim Zahawi that we cannot tackle illiteracy without getting to grips with dyslexia.

‘Everyone has a contribution to make, and it’s our job in politics to help people make it. But the system holds dyslexic people back – when, in truth, the potential has never been greater. Today’s Bill is a small step to releasing that potential.’

Mr Hancock said: ‘I’m passionate about improving support for dyslexic people – and all those with neurodiversity – because I feel I was one of the lucky ones.

‘I had brilliant teachers and decent maths, so could get to an amazing university which could set me on the right path.’

Dyslexia: The learning difficulty that affects one in 10 – but isn’t always spotted in early childhood

Dyslexia is a common learning difficulty that can cause problems with reading, writing and spelling.

Unlike a learning disability, intelligence isn’t affected. It’s estimated up to one in every 10 people in the UK has some degree of dyslexia.

Dyslexia is a lifelong problem that can present challenges on a daily basis, but support is available to improve reading and writing skills and help those with the problem be successful at school and work.

What are the signs of dyslexia?

Signs of dyslexia usually become apparent when a child starts school and begins to focus more on learning how to read and write. A person with dyslexia may:

If you think your child may have dyslexia, the first step is to speak to their teacher or their school’s special educational needs co-ordinator (SENCO) about your concerns. They may be able to offer additional support to help your child if necessary.

If your child continues to have problems despite extra support, you or the school may want to consider requesting a more in-depth assessment from a specialist dyslexia teacher or an educational psychologist.

This can be arranged through the school, or you can request a private assessment by contacting an educational psychologist directly, or a voluntary organisation that can arrange an assessment.

Adults who wish to be assessed for dyslexia should contact a local or national dyslexia association for advice.

Support for people with dyslexia

If your child has dyslexia, they’ll probably need extra educational support from their school.

With appropriate support, there’s usually no reason your child can’t go to a mainstream school, although a small number of children may benefit from attending a specialist school.

Techniques and support that may help your child include:

Universities also have specialist staff who can support young people with dyslexia in higher education.

Technology such as word processors and electronic organisers can be useful for adults, too.

Employers are required to make reasonable adjustments to the workplace to help people with dyslexia, such as allowing extra time for certain tasks.

As well as national dyslexia charities such as the British Dyslexia Association (BDA), there are several local dyslexia associations (LDAs).

These are independently registered charities that run workshops and help to provide local support and access to information.

People with dyslexia find it difficult to recognise the different sounds that make up words and relate these to letters.

Dyslexia isn’t related to a person’s general level of intelligence. Children and adults of all intellectual abilities can be affected by dyslexia.

The exact cause of dyslexia is unknown, but it often appears to run in families.

It’s thought certain genes inherited from your parents may act together in a way that affects how some parts of the brain develop during early life.