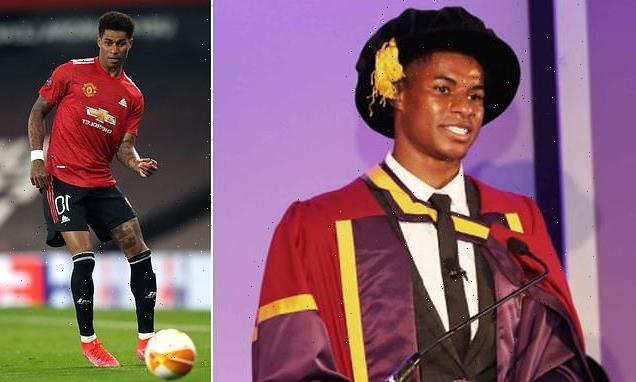 Marcus Rashford says it was 'bittersweet' to collect honorary degree

Marcus Rashford said it was ‘bittersweet’ to collect his honorary degree for tackling child poverty just one day after the Universal Credit uplift was retracted.

The England player, 23, used his speech at the University of Manchester ceremony at Old Trafford to highlight how the Government’s cut meant ‘millions of families across the UK lost a lifeline’.

Speaking at the ceremony donned in a red, maroon and gold graduation gown with a doctorate cap, Mr Rashford told politicians to get ‘out into communities’ like his hometown Wythenshawe in south Manchester.

He urged politicians not to use Covid-19 ‘as an excuse’ and said they need to see ‘first-hand’ the struggle in communities after a £20-a-week uplift in Universal Credit, introduced to help people during the pandemic, was withdrawn.

He said: ‘I’m here to receive my honorary doctorate for my work around child poverty. 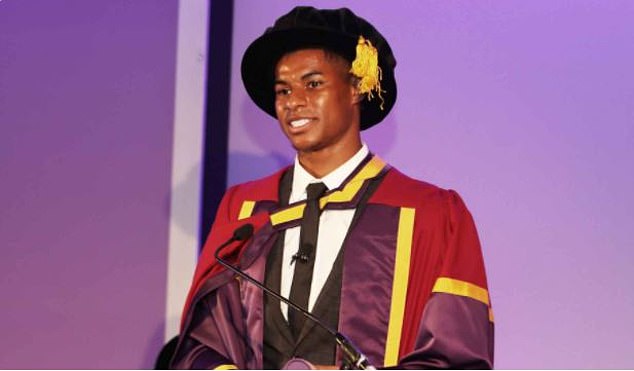 The England player, 23, used his speech at the University of Manchester to highlight how the Government’s cut meant ‘millions of families across the UK lost a lifeline’

‘Yesterday, millions of families across the UK lost a lifeline and a means of staying afloat.

‘A move that could see child poverty rise to one in three children. For that reason, today is bittersweet. It’s time that representatives got out into communities like mine.

‘It’s time they saw first-hand the true measure of struggle. Covid-19 can no longer be used as an excuse.’

Just over 3.5million children in the UK are living in households that receive UC payments, according to Government figures.

The Manchester United forward has become the youngest recipient of an honorary doctorate from the university, rewarding his campaign against child poverty.

Former Manchester United manager Sir Alex Ferguson, who has an honorary degree from the university, joined Mr Rashford’s friends and family to see him receive the award from vice-chancellor Professor Dame Nancy Rothwell.

Mr Rashford said: ‘To be here in the presence of a great such as Sir Alex, and those who have played a huge role in my journey to be where I am today is special.’

The University of Manchester announced Mr Rashford would receive the accolade in July last year, but postponed the in-person ceremony amid the Covid pandemic. 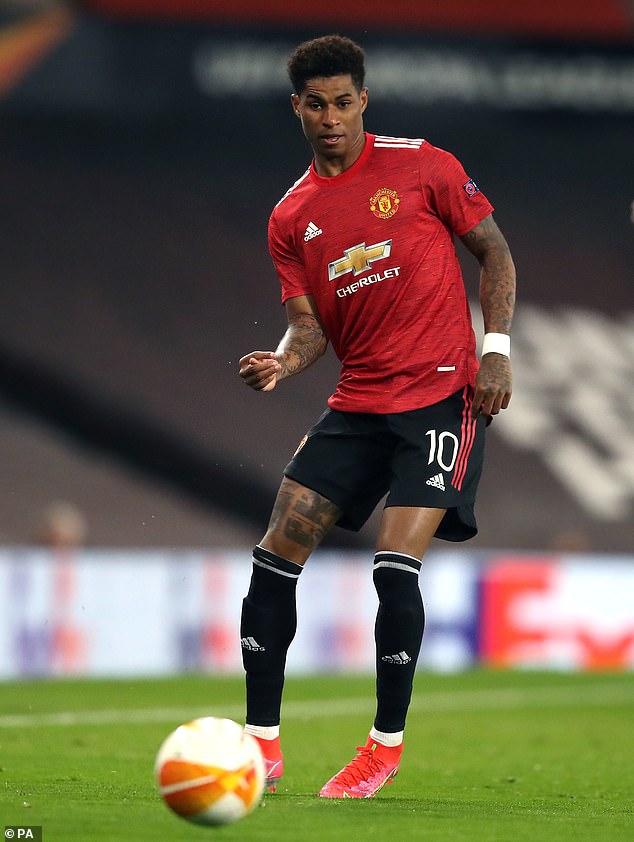 He said politicians needed to see ‘first-hand’ the measure of the struggle after a £20 a week uplift in Universal Credit, introduced to help people during the pandemic, was withdrawn

On presenting Mr Rashford with his degree, Dame Nancy said: ‘Marcus is an exceptional young man who continues to demonstrate a sense of community and generosity that goes well beyond his years.

‘Our university also has social responsibility at its core, and we are extremely proud to share these values with Marcus.

‘It really is an honour to finally present him with this well-deserved award on behalf of our institution.

‘His ongoing charity work and high-profile campaigns not only help millions of people across the country, but inspire many more to try and make a difference themselves. Long may it continue.’

Mr Rashford waged a high-profile campaign last year to persuade the Government to provide free meals to vulnerable youngsters in England during the school holidays amid the Covid pandemic, forcing Prime Minister Boris Johnson into a U-turn.

He has also backed child food poverty incentives and became the youngest person to top the Sunday Times Giving List by raising £20million in donations from supermarkets for groups tackling the issue.

In a speech at the ceremony, Manchester United’s chief operating officer Collette Roche said the footballer ’embodies everything which this club stands for’.

‘He is a young man who embodies everything which this club stands for – he is humble, he is passionate and he is driven to succeed in everything he does.

‘Those qualities have shone through in his work to champion the needs of young people, to tackle food poverty and to deliver real change which has helped thousands of families across the country when they needed it most.

‘We are all so proud of you Marcus and it is wonderful for us all to be with you and your family this evening to see your efforts recognised.’

The ceremony came one day after it was announced the £20-a-week uplift in Universal Credit introduced to help people during the pandemic is being withdrawn.

The Government has been pressing ahead with the cut, saying it was always intended as a temporary measure, despite widespread criticism of the decision.

Campaigners have hit out at the move, claiming hundreds of thousands of people will be plunged into poverty once the uplift is withdrawn.

Save the Children, one in a long line of charities, think tanks and unions opposed to the decision, has said that one child every second will be affected.

From today, no assessments will include the uplift, meaning that from October 13 – a week later – no payments will be received that include the extra money. 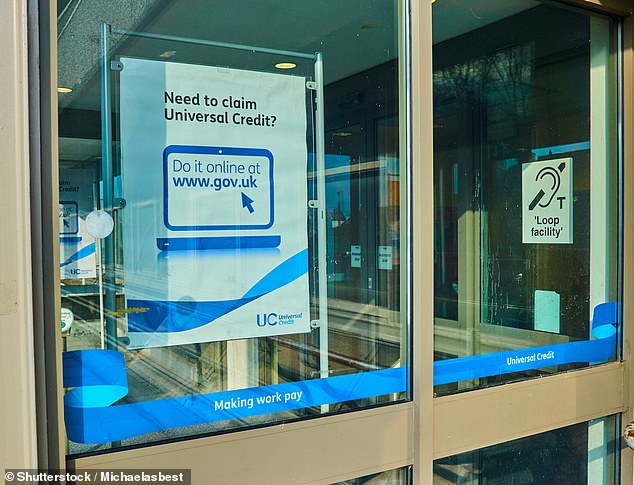 Campaigners have hit out at the move to cut the Universal Credit uplift, claiming hundreds of thousands of people will be plunged into poverty once the uplift is withdrawn (stock image)

It was also revealed a report published earlier this year found Universal Credit can serve as a ‘disincentive’ to work because some only end up £3.29 an hour better off than if they choose to live on benefits.

The report, by Baroness Ruby McGregor-Smith, said that once the expense of childcare, transport, work clothes and lunches are taken into account, there would be little to show for it, according to the Telegraph.

The benefits cut will be staggered over 31 days as families receive payments on different dates, Save the Children said.

This equates to 1.3 children being hit by the cut every second on average over the 31-day period from October 13, Save the Children said.

Rebecca, a single working mother, said she was already ‘feeling the pinch’ and was concerned she would further struggle to feed her eight-year-old daughter when the uplift was removed.

She said: ‘What £20 means to families like mine is being able to afford proper healthy food – not just cheap processed food.

‘It means having the heater on for two hours a day so we’re not freezing.

‘This cut is going to be devastating for families such as ours.’

She said: ‘Over the next month, every second that passes will see another child pushed towards poverty.

‘People we work with tell us they’ve been relying on this £20 lifeline to buy essentials like food and clothing for themselves and their children.

‘Without it, tens of thousands more children are facing a cold and hungry winter.’

She added that it was ‘astonishing’ that the cut was going ahead, as families struggle with inflation, rising energy prices, fuel shortages and promised tax increases.

A Government spokesman said: ‘We’ve always been clear that the uplift to Universal Credit was temporary.

‘It was designed to help claimants through the economic shock and financial disruption of the toughest stages of the pandemic, and it has done so.

‘Universal Credit will continue to provide vital support for those both in and out of work and it’s right that the Government should focus on our Plan for Jobs, supporting people back into work and supporting those already employed to progress and earn more.’