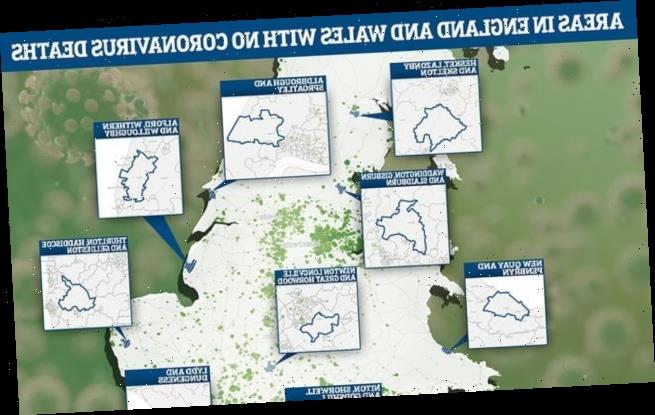 Map reveals location of hundreds of places to avoid a fatality

Britain’s coronavirus-free zones: Interactive map shows how hundreds of UK areas and villages have managed to avoid a fatality

An interactive map which shows coronavirus deaths by postcode reveals hundreds of towns and villages have managed to avoid a single fatality during the pandemic.

Looking at the map, from Office for National Statistics data, reveals large swathes of Wales, South West and East England have remained unscathed by the virus which has blighted the majority of the country.

But it also reveals how three areas of London, which is where more than half of all UK Covid-19 deaths have occurred, have not yet had a registered coronavirus death.

Lambeth North and neighbouring Borough and Southwark Street, as well as North Acton, are all yet to record a death due to coronavirus.

Outside of London, twenty-four towns in Cornwall have not incurred any COVID-19 deaths, with the county suffering just 14 deaths per 100,000 people. 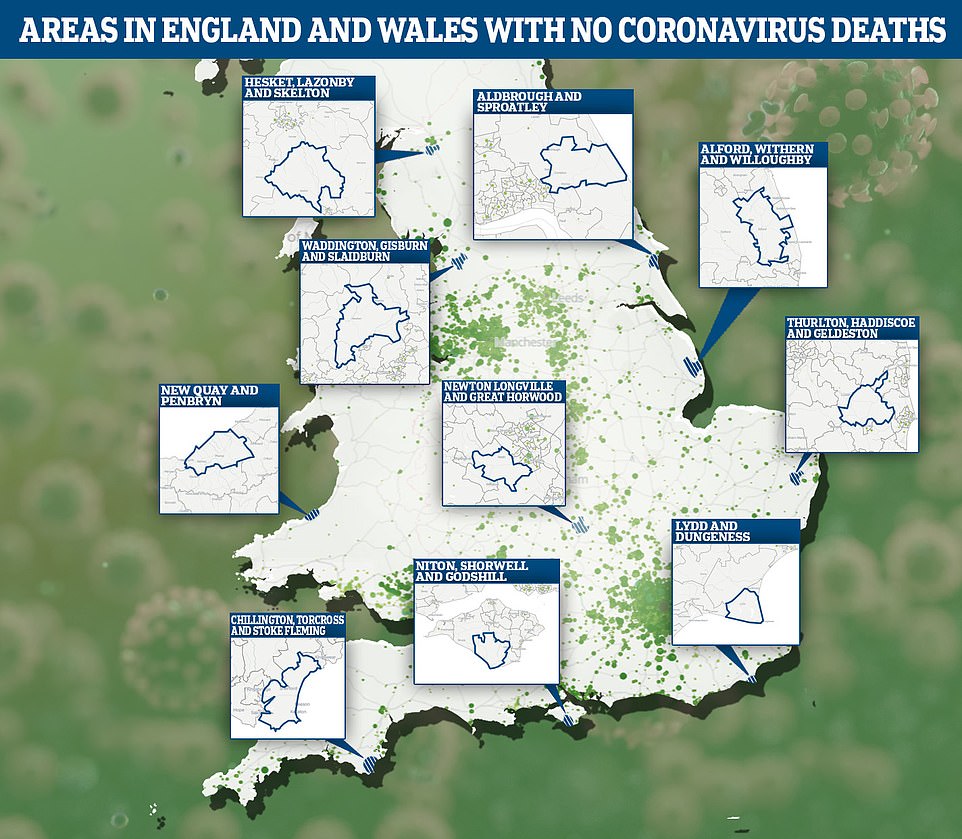 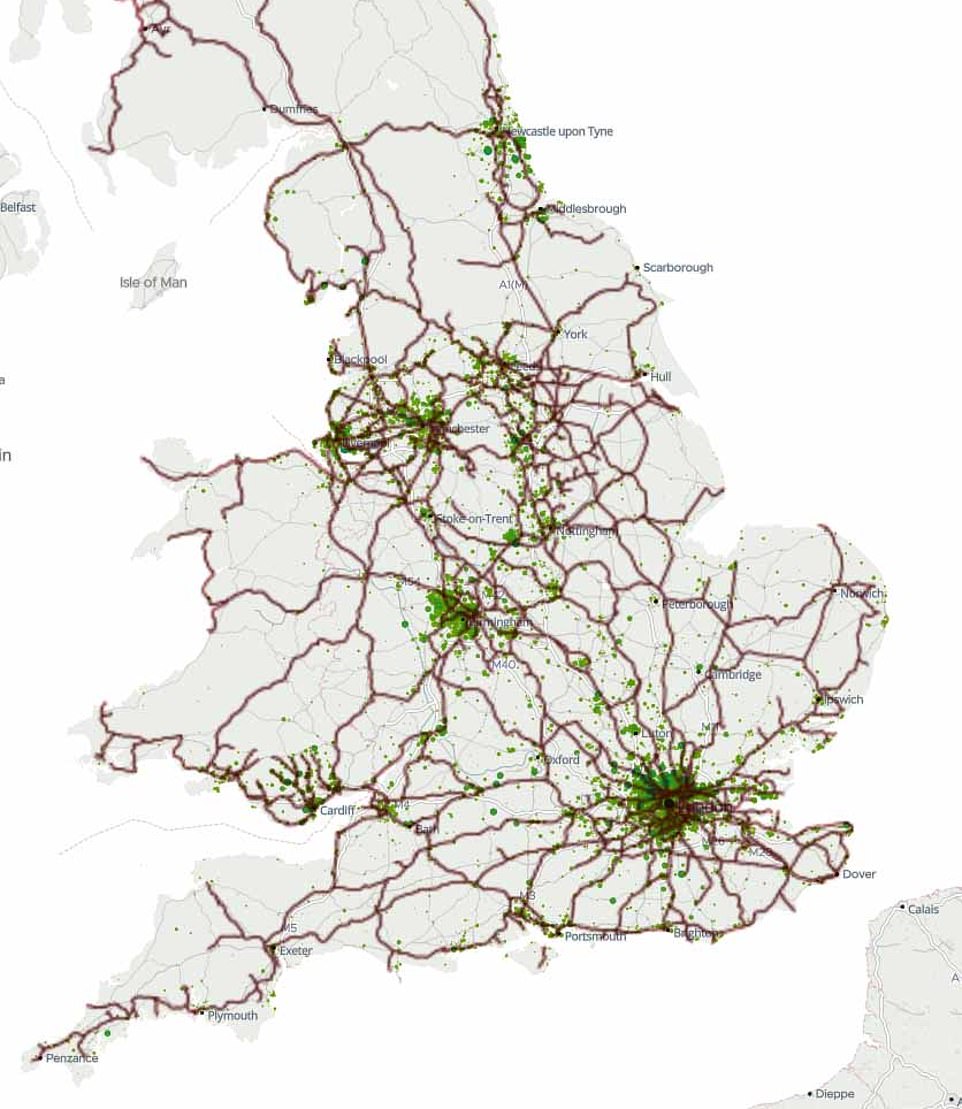 In the East of England, at least 23 local authorities have not recorded any coronavirus deaths in Suffolk, and 21 in Norfolk.

There are nine towns and villages where residents are yet to fall victim to the disease in the Welsh county of Conwy, seven in Pembrokeshire, five in Gwynedd and five in Ceredigion.

In the New Forest national park in Hampshire there have been no recorded deaths in the Milford and Lymington south area, while in neighbouring Dorset, places such as Bovington, Wool and Lulworth have no recorded Covid-19 deaths.

The map shows the bulk of virus deaths are in densely populated cities and their transport routes to one another, with fatalities spilling over in towns along the major railway lines.

MailOnline has analysed the data from the ONS interactive map.

The analysis reveals that there are hundreds of coronavirus death free areas in each section of the country:

Here is a breakdown of each part of the country:

Meanwhile, towns furthest away from cities appear to be avoiding the worst of the crisis.

The interactive map breaks down the number of COVID-19 deaths by so-called ‘Middle Layer Super Output Areas’ (MSOAs) which each have an average population of 7,500.

A MSOA is a geospatial statistical unit used in England and Wales to facilitate the reporting of small area statistics.

They are part of the ONS coding system created by the Office for National Statistics.

The ONS uses them to get a more accurate local breakdown of statistics, rather than going by the overall tallies for each county.

MailOnline scoured hundreds of these areas for coronavirus deaths but, because there are 7,200 MSOAs in England and Wales, our findings are just the tip of the iceberg.

The report analysed 20,283 virus deaths registered in England and Wales from March 1 to April 17, which means it is two weeks out of date and thousands of fatalities have not been included.

Today the government announced another 621 more coronavirus deaths, bringing the total number of people to die from Covid-19 to 28,131.

Yesterday, as previously reported by MailOnline, the Institute for Fiscal Studies (IFS) released today found black and Asian Britons are two-and-a-half times more likely to die from COVID-19 than whites.

Ethnic minority groups – who are most vulnerable to COVID-19 – make up the majority of residents in Newham (71 per cent) and Brent (64 per cent).

Whereas the overwhelming majority of residents in Hastings and Norwich are white, with just 9 per cent and 6 per cent coming from minority backgrounds.

Experts say those living in poverty smoke and drink alcohol more, and are more likely to be obese – all of which increase the likelihood of chronic health conditions.

Patients with pre-existing health troubles struggle to fight off COVID-19 before it becomes life threatening.

And those with lower income are also more likely to use public transport more often and live in crowded houses – driving up their chance of catching and spreading the virus.

The second worst-hit area behind London was the West Midlands, where the death rate is 43.2 per 100,000. The report analysed 20,283 virus deaths registered in England and Wales from March 1 to April 17. 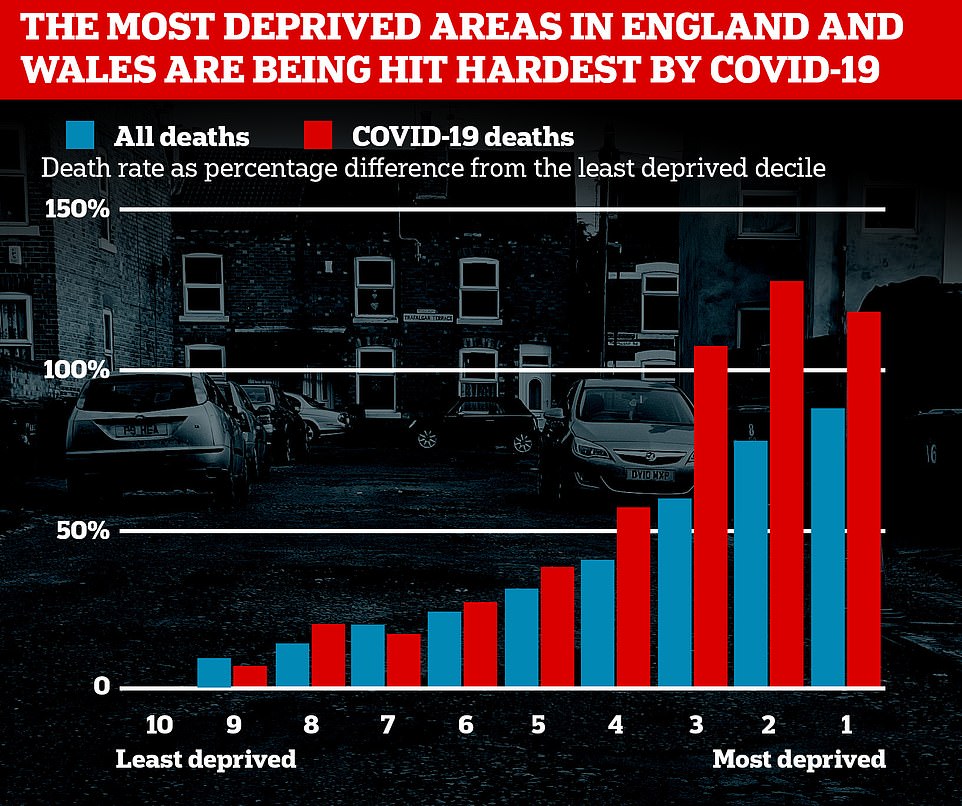 Death rates from all causes are higher in poorer areas, the ONS said, but the pandemic appears to be pushing the rates even higher 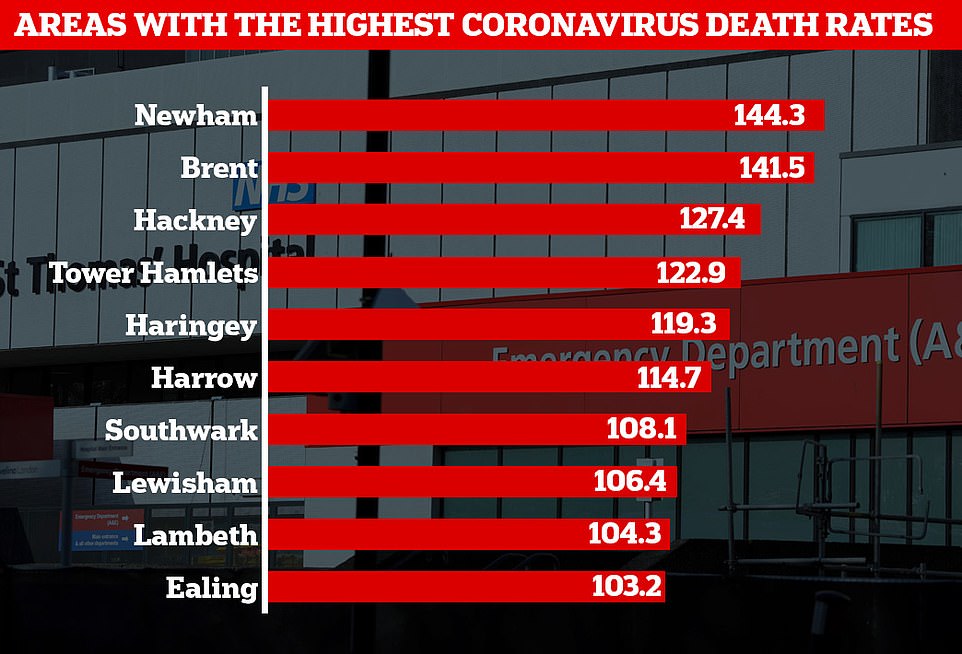 Boroughs in London accounted for all of the top ten worst hit local authorities, the report showed

Javed Khan, chief executive of the vulnerable children’s charity Barnardo’s, said: ‘The news that more deprived areas of the country have a higher mortality rate from coronavirus is worrying, but unfortunately not surprising.

‘This crisis is highlighting deep-rooted inequalities that have been papered over for decades. Vulnerable children and families – and those already experiencing disadvantage – risk becoming the forgotten victims.

‘Without intervention this crisis will be devastating for a whole generation – their mental health, safety, education and job prospects are on the line.

‘The Government must ensure that the emergency funding and resources already announced reaches those in need without delay. And in the months ahead funding decisions should reflect the scale of the challenge now facing vulnerable children and families.’

A Department of Health and Social Care spokesperson said: ‘Any death from this disease is a tragedy and we are working incredibly hard, day and night, to protect the nation’s public health.

‘We have commissioned urgent work from Public Health England to understand the different factors that may influence the way someone is affected by this virus. We will set out full details in due course.’

Actress MARCIA DO VALES opens up about Madrid's coronavirus lockdown