Home » World News » Many people, but no one in charge of hotel quarantine 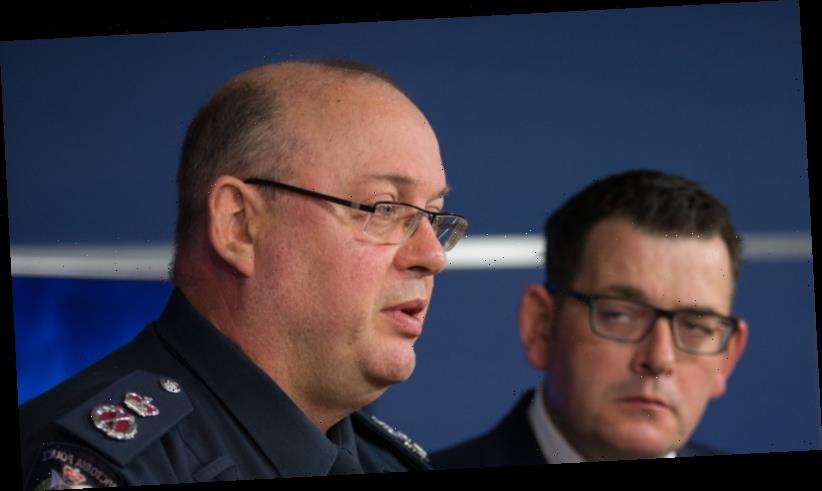 Many people, but no one in charge of hotel quarantine

No one knew who was in charge of Victoria’s shambolic hotel quarantine program, not even the department described as the lead agency in the inquiry into the scheme.

The senior Department of Health and Human Services authorised officer, Noel Cleaves, told the inquiry on Friday hotel quarantine was not run as a “classic pyramid organisational structure”.

“It wasn’t as clear as there was one person who had ultimate authority for everything that happened inside that hotel,” Mr Cleaves said.

His evidence confirmed what was foreshadowed at the beginning of the ongoing inquiry: many departments and agencies were involved, and no one appeared to be in charge.

There was also the Department of Jobs, Precincts and Regions, which was in charge of contracting the hotels and cleaning services, supporting DHHS as lead agency. 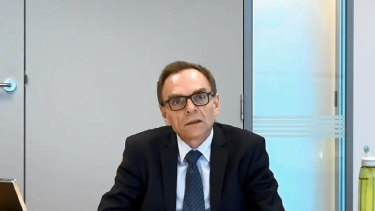 Noel Cleaves, from the Department of Health and Human Services, appears at the inquiry into hotel quarantine on Friday.

This was shown about a month into the program — in early May — by Jobs Department officials who, in emails shown to the inquiry, said briefings at shift change-overs were not happening in some hotels, leading to a clack of clarity about responsibilities.

"DHHS were being asked to do things and it wasn't happening. It was a bit like waiting for Godot at that time," said Arthur Moses, SC, the lawyer for one of the main security suppliers.

Mixed messages emerged about critical aspects, including whether detainees who had tested positive could leave at the end of their 14 days of quarantine.

Rachaele May, the public servant in charge of the Jobs Department's response from April, said at first guests who were COVID-19 positive could leave if they were going straight home.

That advice changed so that people who were positive could not leave until they had returned a negative result, but not until the end of the program, Ms May said.

There was also inconsistency with the use of personal protective equipment and infection control.

“Do you know who was briefing staff and contractors on the appropriate use of PPE and safe work practices from a government department?” Mr Moses asked Mr Cleaves.

“I can’t answer in a general sense … nurses would occasionally run short little impromptu sessions on how to put on or take off surgical masks and gloves and how to appropriately hand rub," Mr Cleaves replied.

Evidence to the inquiry is that a hotel worker and more than 20 security guards at two hotels caught COVID-19 in May and June.

The outbreaks inadvertently spread the virus into the community, causing the state's deadly second wave of coronavirus.

As well as leading to the stage four lockdown, the outbreaks resulted in Victorian Premier Daniel Andrews putting a stop to international arrivals in Melbourne, which in effect suspended the hotel quarantine program.

Other critical evidence to the inquiry on Friday was that the decision to use private security at the hotels came at the recommendation of then Victoria Police chief commissioner Graham Ashton.

Police presence has been a sticking point in the inquiry. In NSW, police are in charge of hotel quarantine and have heavy oversight of the performance of security companies. But not in Victoria, where police had no oversight of the security guards. 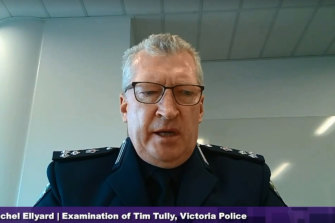 Commander Tim Tully said a police presence inside the hotels was not required. Instead, the force had an officer rostered every shift to respond to issues within hotels.

"It would have been an insufficient use of resources," Mr Tully said.

"This was at a time when police were required not only to undertake their normal role in protecting the community, but in unprecedented circumstances with the pandemic. 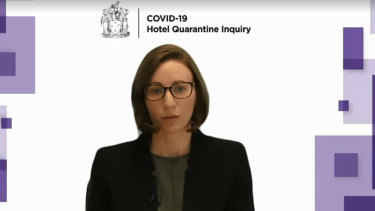 Rachaele May, the Jobs Department official who led the agency’s response to quarantine.

"Across the duration of the program, I certainly wasn't seeing any significant incident or increased risk with respect to security that required a policing presence that would suggest that we needed to have a 24/7 policing presence."

Jobs Department executive director Claire Febey previously told the inquiry she requested via her department superiors that police have a 24/7 presence in the hotels, but she didn't receive a response.

Mr Tully said he never received a request for 24/7 support.

"No I didn't. I'm not aware of any such request whatsoever," he said.

"If such a request was put forward then it would have been considered in terms of the need and the availability of police resources to fulfil such a request."

Mr Moses asked the police officer if the paramount concern would have been public safety.

"That is correct," Mr Tully replied.

Our weekly newsletter will deliver expert analysis of the race to the White House from our US correspondent Matthew Knott. Coming soon. Sign up now for the Herald‘s newsletter here, The Age‘s here, Brisbane Times‘ here and WAtoday‘s here.