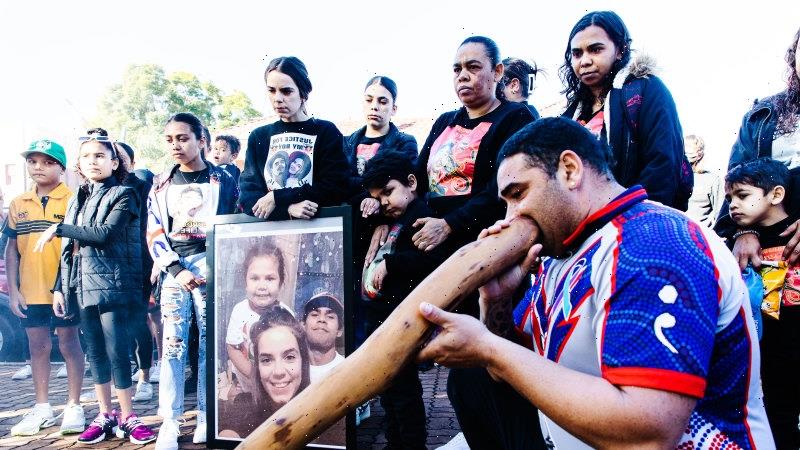 An Aboriginal man who fell into a river and drowned while being pursued by police remained alive in the cold, fast-running current for more than 40 minutes after police initially left the scene because they couldn’t see or hear him, an inquest has heard.

Gomeroi man Gordon Copeland, 22, died in the early hours of July 10, 2021 when he disappeared into the Gwydir River at Moree in northern NSW. The river was swollen from recent floods and full of debris, and the riverbank was treacherous and slippery. 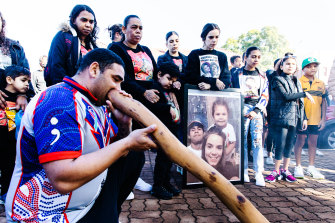 Loved ones of Gordon Copeland pictured outside Moree Courthouse on Monday.Credit:Grace Quast

Police had been following Copeland because he was one of two passengers in a black Toyota Corolla which took off when it encountered a police patrol. The driver, who was on parole, was scared he would go to jail because the car was unregistered and he did not have a licence.

A police car followed at a distance and did not activate its lights or sirens. 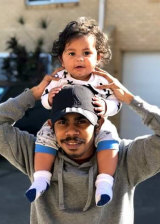 Gordon Copeland, pictured with one of his children, died in July 2021.

When the Corolla pulled onto a remote dirt track and became bogged, Copeland and two others got out and ran because they could see headlights pulling up behind them. A woman in the car would later explain that they were scared “because of the coppers”.

“Every time coppers come around they scare you, they scare everyone,” she said.

Copeland had been crouching down and hiding near a shrub when one of the officers spotted him and said something like “police, don’t move”.

The young man ran, jumping over a wire fence and becoming tangled, before he fell down an embankment into the river at about 2.30am. His two companions, who were still running, both described hearing a splash.

On Monday, at the opening of an inquest at the NSW Coroners Court, counsel assisting Dr Peggy Dwyer said police shouted out to Copeland and tried to look for him in the river, but all they had was torches and they could not spot him.

As the officers searched on the riverbank, one fell over multiple times because it was so slippery. They thought it would be too risky to enter the river because the current was so strong. 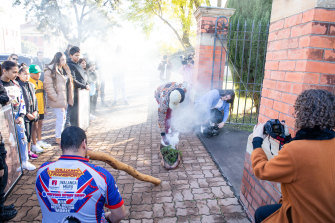 A smoking ceremony is held outside the courthouse before the inquest begins.Credit:Grace Quast

At 3.03am, police left the scene because they believed Copeland was no longer there. Two officers were directed to go back at 3.45am to collect shoes that had been left in the bogged car, in case it was later reported stolen.

When the officers started to search the car, they heard noises including a groaning sound coming from the river and ran down to investigate.

They shouted out phrases including “mate, you’re not in trouble, we’re here to help” but did not hear anything until they spotted Copeland in the water at about 3.51am. They began yelling at him to swim towards them.

Copeland was grunting, appeared to be in a lot of pain, and was trying to stay afloat. One of the officers said he would grab a branch and get closer, but as he headed towards the middle of the river it appeared the current became too strong and Copeland disappeared at around 4.06am.

His body was found in the river three months later, after previous police searches were unsuccessful due to divers experiencing a lack of visibility in the murky water. Sonar was used to locate him snagged on a tree deep underwater.

The inquest will examine a number of searches of the river, including an early search which was called off.

According to a survival expert, Copeland – who had a slim build – would have become hypothermic after about 40 minutes in the cold water. The expert said even a strong swimmer would have had little chance of negotiating the river because the water was so deep and fast.

The inquest will examine a number of searches of the river, including an early search which was called off because police incorrectly believed there had only been two people in the car.

It will also examine the police contact with the Corolla and whether it constituted a pursuit, if police actions were appropriate when they first arrived at the river, if officers did enough to assist Copeland when they went back to the river, and if it was appropriate to call off the searches.

The inquest heard Copeland’s mother continued to ring police at Moree to insist he was missing, and at one stage the officer at the other end hung up on her. It was unclear whether this action was accidental.

State Coroner Teresa O’Sullivan noted a smoking ceremony was held outside court on Monday, which she attended, and there had been a solidarity walk from a local park to the courthouse.

She acknowledged Copeland’s mother and partner, who attended court, and his father who watched through a video link, and thanked them for participating in the “truth-telling journey”.

“I hope that by having this inquest, some of your many questions might be answered, and through this hard work we all have to do it might stop another family going through a loss like this in the future,” O’Sullivan said.

Barrister Anders Mykkeltvedt, appearing for NSW Police, said it was difficult to imagine the impact Copeland’s loss had on his loved ones. He said the Police Commissioner wished to express her regret for the “extraordinarily painful” delay in locating his body.