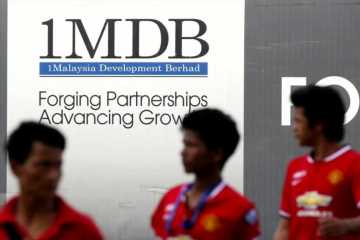 Malaysia on Monday filed criminal charges against Goldman Sachs and two of the U.S. bank’s former employees in connection with an investigation into suspected corruption and money laundering at state fund 1MDB.

Malaysia will seek jail terms as well as billions in fines from Goldman Sachs and four other individuals who allegedly diverted about $2.7 billion from 1Malaysia Development Bhd (1MDB), Attorney General Tommy Thomas said in a statement. (All dollars U.S.)

This is the first time Goldman Sachs, which has consistently denied wrongdoing, has faced criminal charges in the 1MDB scandal.

A Goldman Sachs spokesman said the charges were “misdirected” and the bank would vigorously defend them. The bank continued to cooperate with all authorities in their investigations, he said.

Goldman Sachs has been under scrutiny for its role in helping raise $6.5 billion through three bond offerings for 1MDB, which is the subject of investigations in at least six countries.

The U.S. Department of Justice has said about $4.5 billion was misappropriated from 1MDB, including some money that Goldman Sachs helped raise, by high-level officials of the fund and their associates from 2009 through 2014.

“The charges arise from the commission and abetment of false or misleading statements by all the accused in order to dishonestly misappropriate $2.7 billion from the proceeds of three bonds issued by the subsidiaries of 1MDB, which were arranged and underwritten by Goldman Sachs,” Thomas said in a statement.

He said the offering circulars filed with the regulators contained statements that were false, misleading or with material omissions.

“Having held themselves out as the pre-eminent global adviser/arranger for bonds, the highest standards are expected of Goldman Sachs. They have fallen short of any standard,” Thomas said.

Prosecutors would seek fines against the accused “well in excess” of the allegedly misappropriated $2.7 billion bond proceeds plus $600 million in fees received by Goldman Sachs, he said.

Malaysia would also seek jail terms of up to 10 years for each of the individuals accused, he said.

Thomas accused the four individuals charged of conspiring to “bribe Malaysian public officials in order to procure the selection, involvement and participation of Goldman Sachs in the bond issuances.”

Leissner pleaded guilty to conspiracy to launder money and conspiracy to violate the Foreign Corrupt Practices Act. Ng, detained in Malaysia, is facing extradition to the United States.

Lawyers for Leissner and Ng could not be reached immediately.

Loo, against whom Malaysia brought other 1MDB-related charges this month, has not commented on the 1MDB case and her whereabouts are not known.

Low, whom authorities have described as a central figure in the suspected fraud, maintained his innocence.

“As has been stated previously, Mr. Low will not submit to any jurisdiction where guilt has been predetermined by politics and there is no independent legal process,” Low’s spokesman said in a statement.

Thomas also said the fees received by Goldman Sachs for the bond offering were higher than prevailing market rates.

Goldman has said the fees related to additional risks: It bought the unrated bonds while it sought investors and, in the case of a 2013 bond deal which raised $2.7 billion, 1MDB wanted the funds quickly.

The 1MDB scandal was a major reason for former premier Najib Razak’s shock election defeat in May.

He has been charged with corruption over the scandal and has pleaded not guilty.